Cuss all you want about this year's record snow, it is better company than some guests. While it's hanging around causing us work and inconvenience, at least it's been entertaining.

Come on, smile and admit that billowy white is easier on the eye than a cold, gray, crusty landscape. Also, hasn't it been a conversation starter and oiled a few rusty neighborhood connections? For instance three, count 'em three, drivers slowed and stopped to comment as we dug and took these photos. Seasonally distant neighbors, they each broke tradition with quips along this line, "Building an igloo now?"

A record breaking year is dramatically captured in this graphic from Oregon State University's Prism project, which is supported by the USDA RMA (United States Department of Agrculture Risk Management Agency). On the map blue is a lot of precipitation (400% of normal) while red is very little (none to just 20% of normal). Our area  -- southeast Michigan -- received 130-150% of its normal precipitation in January. What about yours?

Even more important, this snow is making itself useful.

Useful snow: It's insulated the garden

It's kept the soil warm. No kidding. The ground is not frozen under all that fluffy stuff. Sure, there is frost in the ground where the snow has been packed down or scraped away but not in the garden and not under lawn. 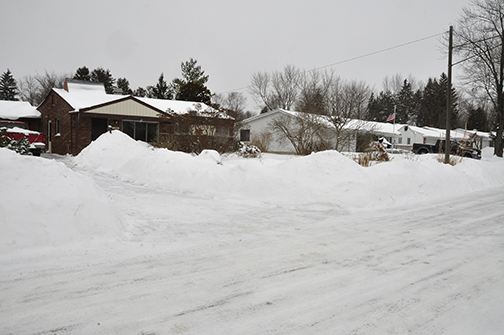 Hard to picture that there are gardens somewhere under these record-breaking snow banks. Great to know they're ice-free, insulated by all that fluff. Scroll on down for photo proof. 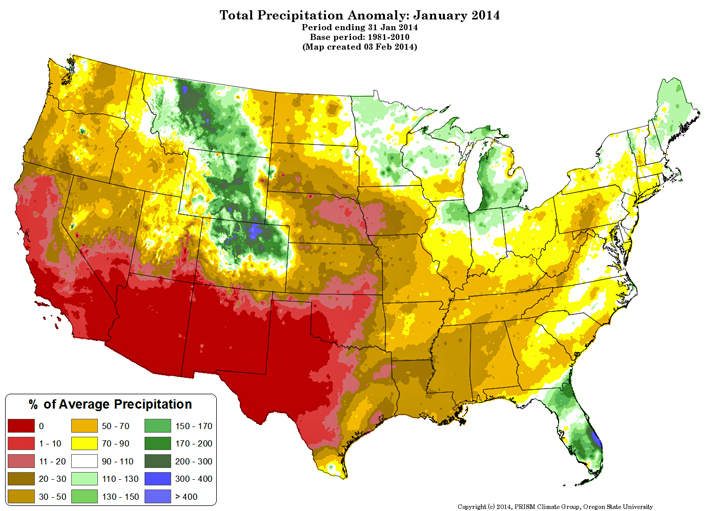 We dug in three places (photo proof!) in three yards on Valentine's Day: In a garden in the wide open, in a lawn in the wide open, and at the garden/lawn edge in the north shadow of a house. We thought we might find a light crust once we cleared the snow. Not so. There was no crust at all. We could have dug with a trowel, and the soil was so warm we could handle it and crumble it with bare hands.

We nabbed a worm at less that two inches deep, and took him in to the turtle we are boarding. Darwin's gotten bored with packaged food and really appreciated a free range worm. 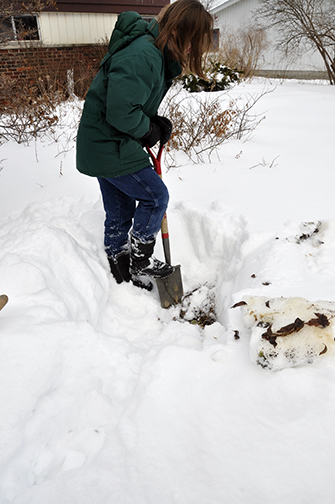 We confirmed the results of our digging with a brick layer foreman who said, "Oh yeah, where we are dealing with undisturbed ground we are just peeling the snow away and digging. But where we've been driving over the area, the frost is up to about three feet down."

We didn't need to check. Studies have proved it over and over.

This is good news for all recently planted plants and roots in general -- many will continue to function and even grow in ground warmer than 40°F. It can also mean a speedier improvement for beds and lawns that were aerated and topdressed with compost in fall. That's because some soil microorganisms and soil animals that break down organic matter and help minerals bind into fertile crumbs have continued to work. Work they might normally not complete until June may be done by April.

Some lawns and certainly some golf course greens may need attention after being covered for so long at relatively warm temperatures. During the first mild days after snow melt, the turf may have a pink cast from snow mold. That will clear as the surface dries and warms, causing little or no damage to otherwise healthy lawn.

The Valentine's Day Dig: 16" blanket, no ice below! 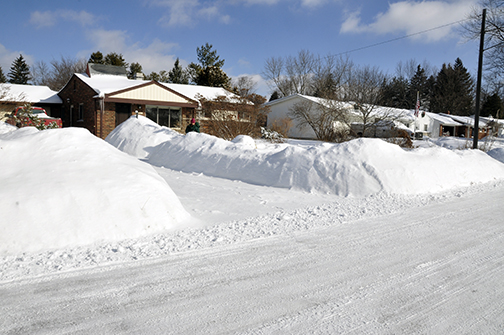 The tough part about shoveling in this kind of winter is finding places to stack the snow... 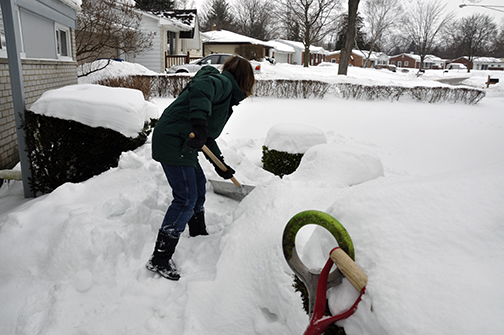 ...and the real work involved in digging into the ground is making a path through the snow banks to break through to the garden or lawn. 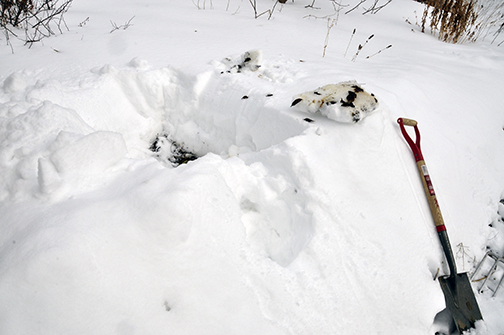 For you, for us, we did it. Then we cleared the snow to reach the garden. 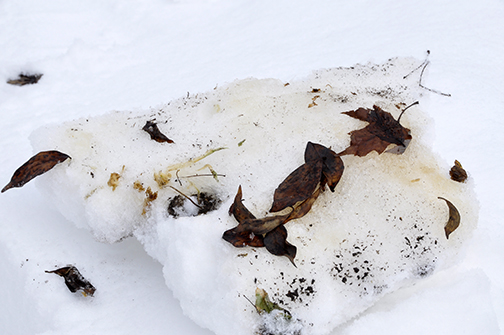 We almost stopped work when we shoveled off the "zero layer" of snow -- the one in direct contact with the soil. That's because we saw this brown stain. The soil was causing it to melt.

Then, it was just like summer -- insert spade, lift out soil. Normally we need foot power and a hard soled boot on a spade or even a fork to break winter crust but in this case soft snow boots were adequate and the spade wasn't actually necessary. A trowel would have done. "Shoot," Janet said, "I can stay out here and pull weeds with my bare hands, it's so warm at ground level!" 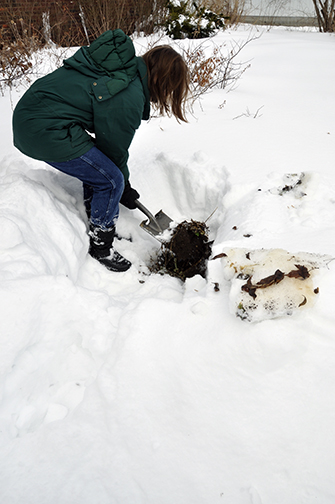 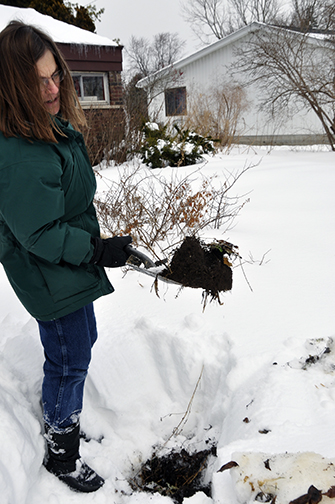 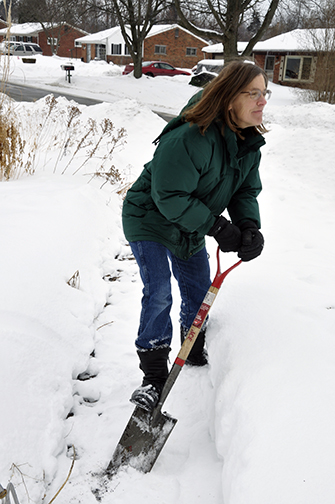 Where we've kept the path shoveled there has been only an inch or so of insulation. There, neither spade nor fork would penetrate. Not, at any rate, when driven by a soft snow boot. We considered changing boots and cracking through the crust to check its depth but had other things to check, first... 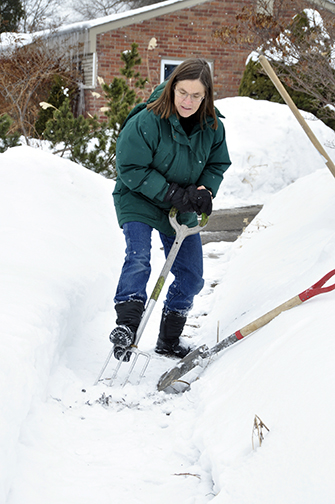 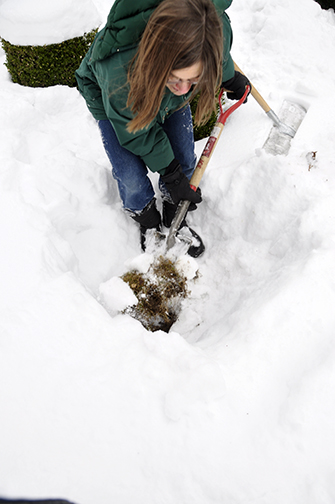 ...such as looking for ice in lawn and garden areas shaded by buildings. Here's the grass in that situation -- it and the garden were as easy to penetrate as the garden soil we've already showed you. On the right below, Janet's holding the square of sod vertically so that it can be a bit hard to recognize as turf. So we've included an orientation diagram. 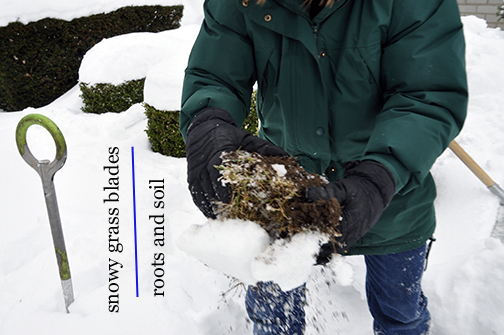 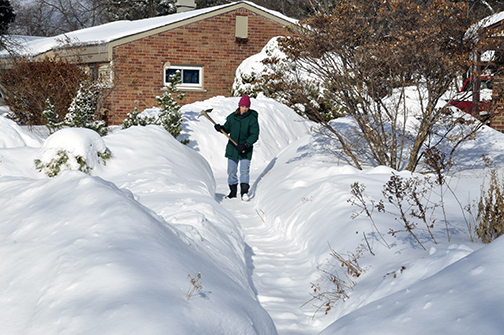 Okay, back now to check the situation on our front garden path -- mulched in summer, kept shoveled in winter. Janet decided it was easier to grab the pick ax than to go inside and change boots. 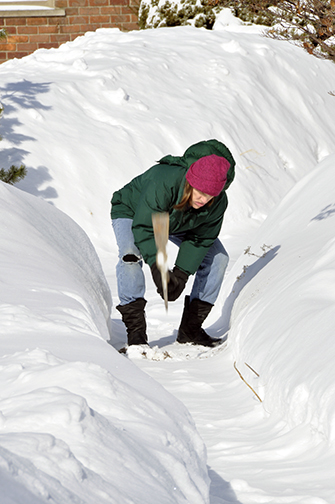 Two swings, then use the embedded pick as a lever... 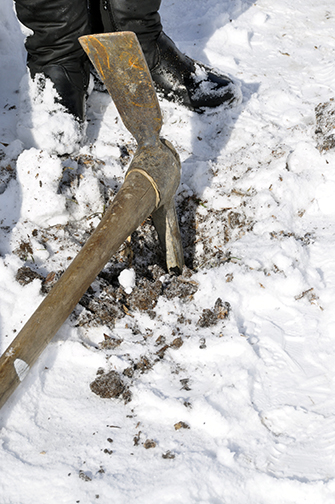 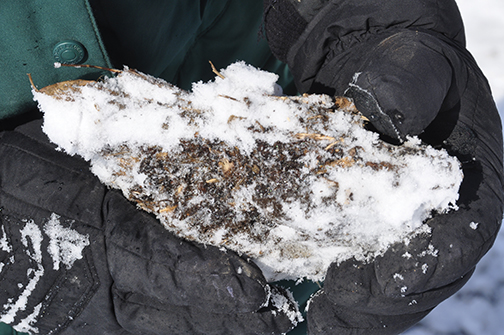 ... to pop up a chunk of frozen mulch and soil. The frost goes at least as deep as the pick. Now, we are silly sometimes but we try to avoid being stupid. Frost depth is a function of exposure, time and temperature, and this year the first two have been extended, the last very low. So we don't even need our *bricklayer friend's testimony to know when to quit.

Why would anyone Sponsor this craziness?
Because we all learn by pushing the limits. 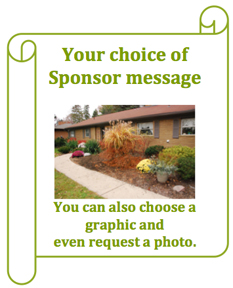 Please consider Sponsoring a topic, a page, or our work in general.
Every dollar helps -- you simply email us to tell us the amount
you can donate, from $1 on up. Sponsorships tell us what topics to
address, and they've created a reader-recommended reading list, too.
Most important, they help us pay the bills for this labor-of-love
website, and sometimes to hire help with the adminstration...
...so we can go out and keep digging up answers for you.