Weeds: Know them to beat them

Thank goodness that most gardens have only a handful of weed species to deal with. However, as a group we certainly have a long list of enemies!

That's why we hear from you when we write about a weed or group of weeds. You say, "But you didn't tell me about this weed!" So here's our most extensive list of weeds so far.

Born of our Weeds webinar

It's 59 of the worst and most common weeds, a photo collection based on the premise that if you get to know a weed from leaf to root you are much more likely to best it in battle. Attendees to our Weeds webinar (link takes you to its recording on our Youtube channel) requested the list we used. It took a little doing to redesign it to work for you as it did during the webinar but we did it. It should be a big help to you. We think we already feel the fearful trembling of millions of weed roots.

The list also contains weed management tactics for each member of this rogue's gallery.

Be sure to let us know if this interactive appendix to our webinar Weeds: To know them is to beat them becomes a helpful addition to your weeding tools.

Please note it's Appendix one and we're featuring it in our Hit or Miss department. We expect to hear from you soon with nominations for Appendix 2!

Errata: In the Appendix the photos of dodder are not labeled. You will see the photos when you link from the weed list; the photos follow the dandelion pictures.We are  working to issue a new edition. 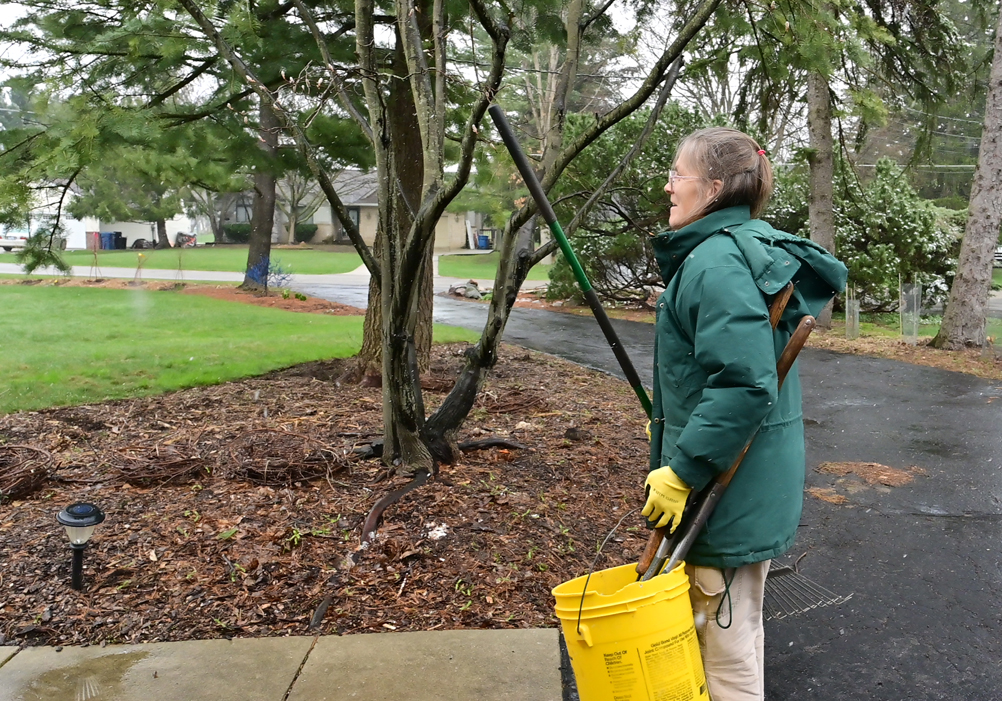 Janet leads you on a weed hunt... 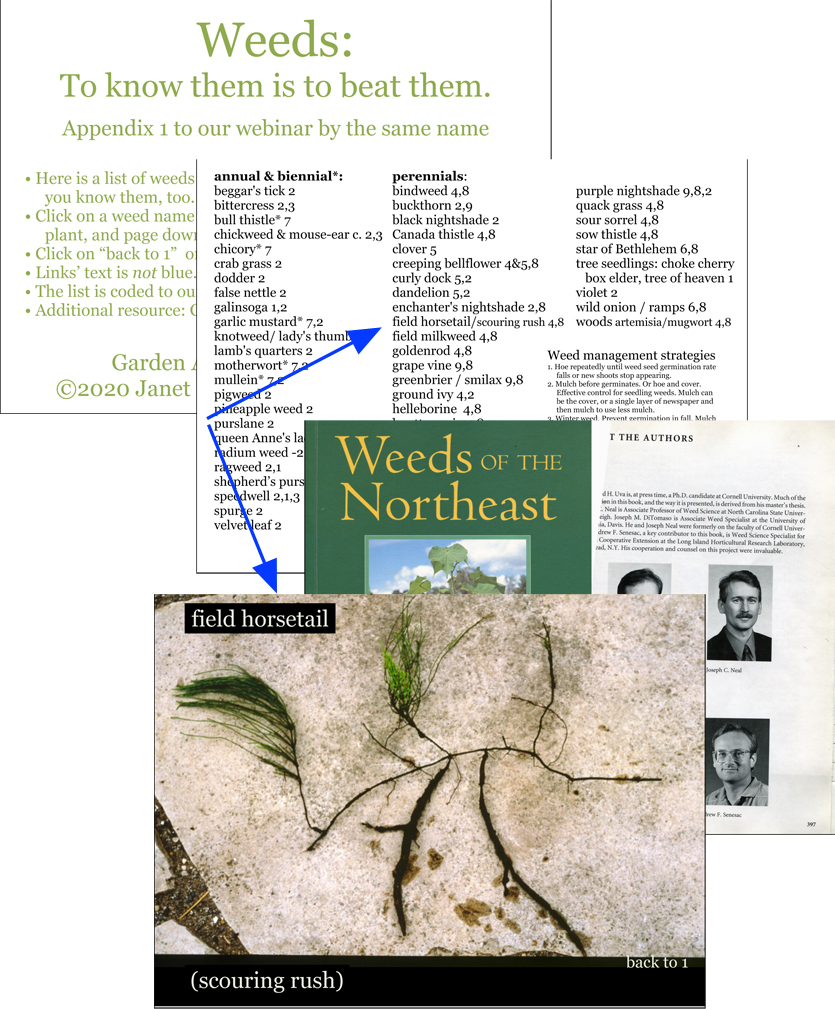 ...and we leave you with an interactive 167-page weed I.D. reference. Click on the weed name to see its mug shots.

It is never too early to weed. Even in winter and even on a snow showered April day you can take steps to get ahead of your nemesis, whatever weed species it may be. We went out this week to address some problem areas in our own yard. Steven gallantly agreed to stand still with a camera in the cold so you could come along. He took the photos you see here plus a short video of Weeding Tips we have posted on our YouTube channel.

First we looked at our no-mulch areas: Are they thick with weeds or holding their own?

We always have spaces that weren't mulched in fall. Sometimes we were still working there when bitter cold came. Other areas are deliberately mulch-free, such as drainage runs and rain gardens, where mulch would float and pile up. In such places we plant to create a living mulch, where foliage covers all during the growing season.

In our mulch-free drain area we found seedlings of two weed species along with seedlings of our intended, desirable species. Great! Our original plants are beginning to seed around and fill in. Nothing for us to do except pluck out the weeds and leave the creeping forget me not (Myosotis scorpioides, the true perennial, carpet forming forget-me-not). Those volunteers will grow and cover all.

It's tedious now but it's a new planting. This level of work won't be needed every year.

The second bare area was under renovation in fall when we ran out of mulch. Winter weeds - species that germinate in late fall and winter thaws - greeted us, along with a couple of perennials we missed while clearing the bed for replanting.

Our answer is to pull the perennials, remove them from the area, hoe the winter weeds then smother them. We still have no mulch pile to draw on but a nearby smother layer is about done killing a tangle of weedy perennials. It can spare some of its mulch. One thin layer of newspaper atop the hoed weeds, topped with a veneer of mulch will hold the space weed-free until we get back to it. 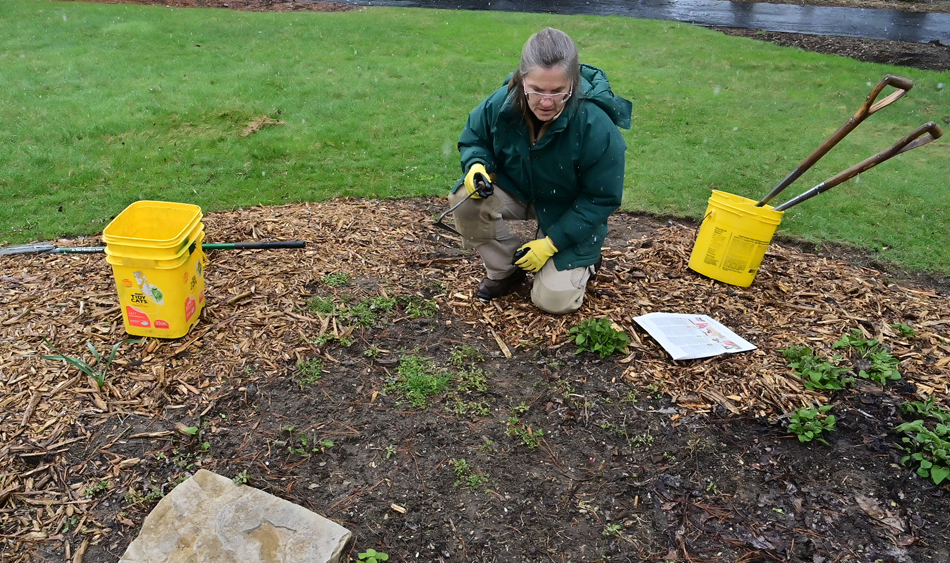 Surveying the area that went through winter without mulch. A gaggle of winter weeds has appeared. Left alone for a few more weeks they will load this area with weed seeds. 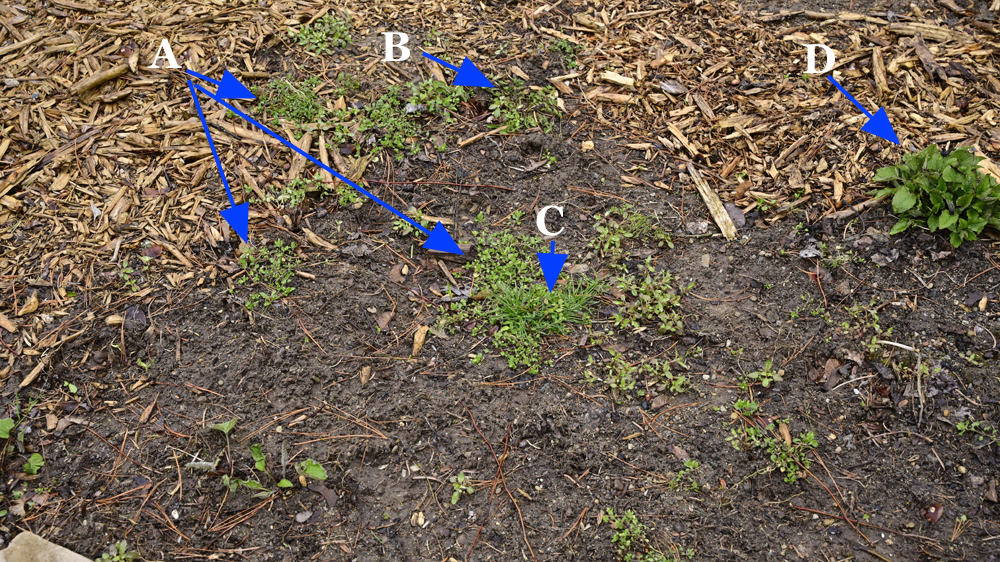 Most of the weeds here are chickweed that germinated in late fall or mild parts of winter (A). One dandelion (B) and a tuft of grass (C) escaped the fall dig. Several clumps of bigleaf forget-me-not (Brunnera macrophylla) are welcome in this bed. 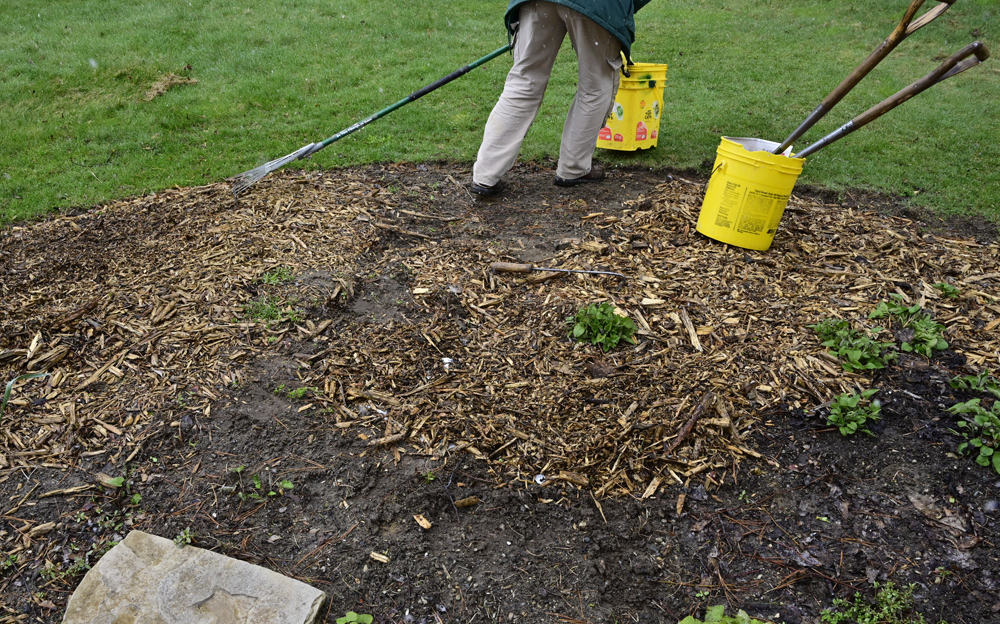 With a single-sheet layer of newspaper over the hoed chickweed plus a veneer of scraped-together mulch, the space will stay clean until our next visit.

(The remaining bare soil was covered later in the day. We moved on to visit each of our other demonstration areas for the sake of the cameraman's cold fingers.)

We are new to this property, which had been gardened before. A number of the beds were infested with running root weeds, including some on our least-wanted list. We have been clearing an area at a time. Last year we targeted two areas. One, a bed thick with snow on the mountain (variegated bishop's weed, Aegopodium podagraria variegata). Two, an area where Canada thistle threaded through tree roots and groundcover.

We methodically cleared both beds - those who attended or viewed our Improving the Older Garden or Weeds webinar are acquainted with this process of digging through every square foot of a bed. (Another place to learn it is on pages 17-20 of What's Coming Up issue 67.) After clearing the beds we began patrolling for survivors. Every two weeks we inspected for bishop's weed and thistle resurgence. As the season waned we found fewer and fewer shoots and were able to extend the interval between patrols.

Respect for our opponents

We are not easily hoodwinked by weeds. We know there are still some there. The beds look clean in passing but still merit a close look. Remnant roots sprout and when they reach the surface stall there, photosynthesizing, flying under the radar but socking away starch in new roots and shoots. In a month when a less invested gardener might arrive to do a spring clean-up, what was a tiny root bit with one sprout may be a branched root ready to leap up with four or five shoots.

Not in our garden! Not after all the work we put into clearing the bed. Not in a place we are so eager to replant with our chosen plants. We sought each sprout, loosened with a fork and removed the survivors. Beating them here at the end of the war. 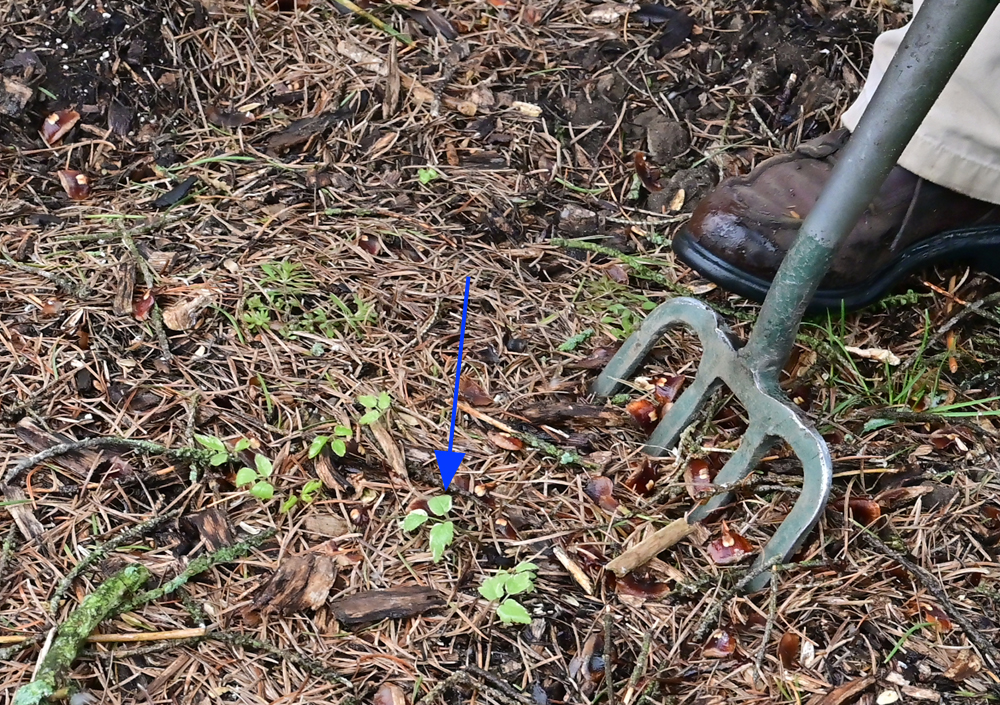 Small shoots of snow on the mountain/variegated bishop's weed stand out as soon as they break the surface of this recently cleared bed. Fork in, loosen the soil, remove shoot and root. 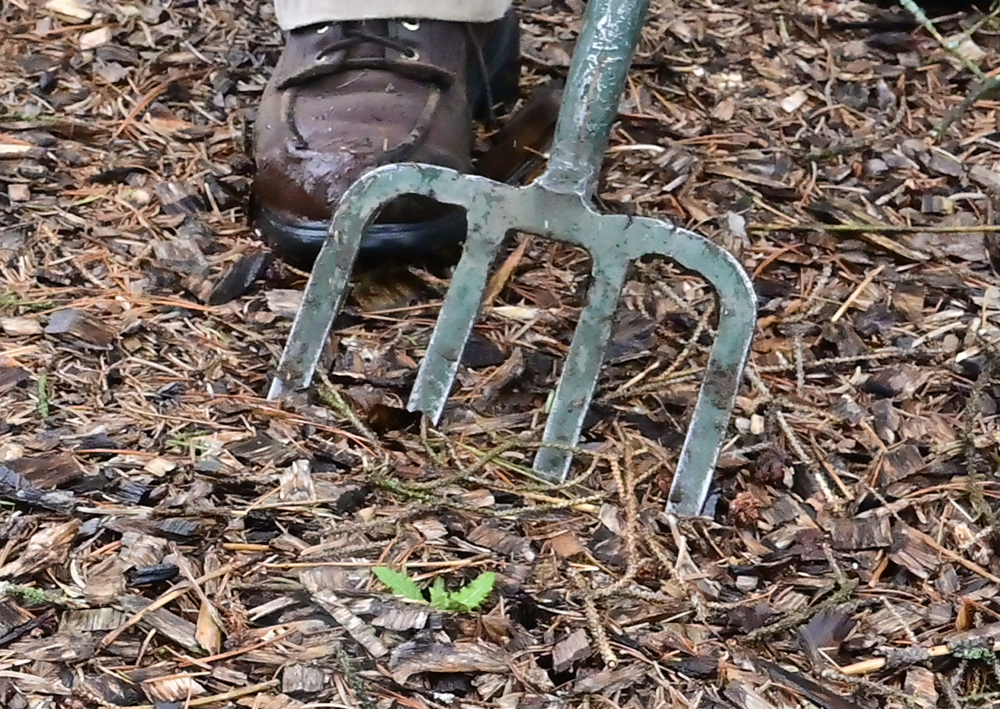 This bit of thistle may look small but it's mighty. 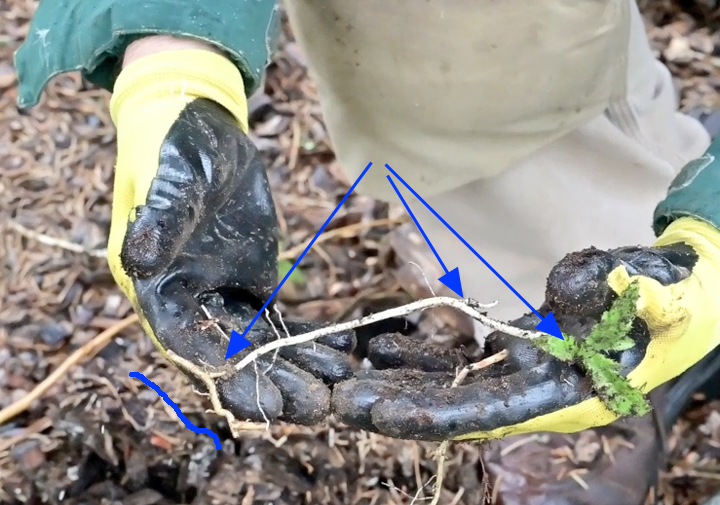 Once out of the ground it's plain to see this came from a small section of root that escaped our dig last year (blue line). This spring it produced 6 inches of shoot (from left arrow to right arrow). Worse, those small but powerful leaves have already socked away enough starch to make a new shoot (center arrow).

All weeds start on the edge

Finally, we went back to what is an overall weeding priority in early spring: edging beds. We slice along the edge to lift out invading grasses that have grown 6-12" into the bed. Those roots have turned upward and begun to show green. They are about to break the surface and send new running roots even further into the bed. 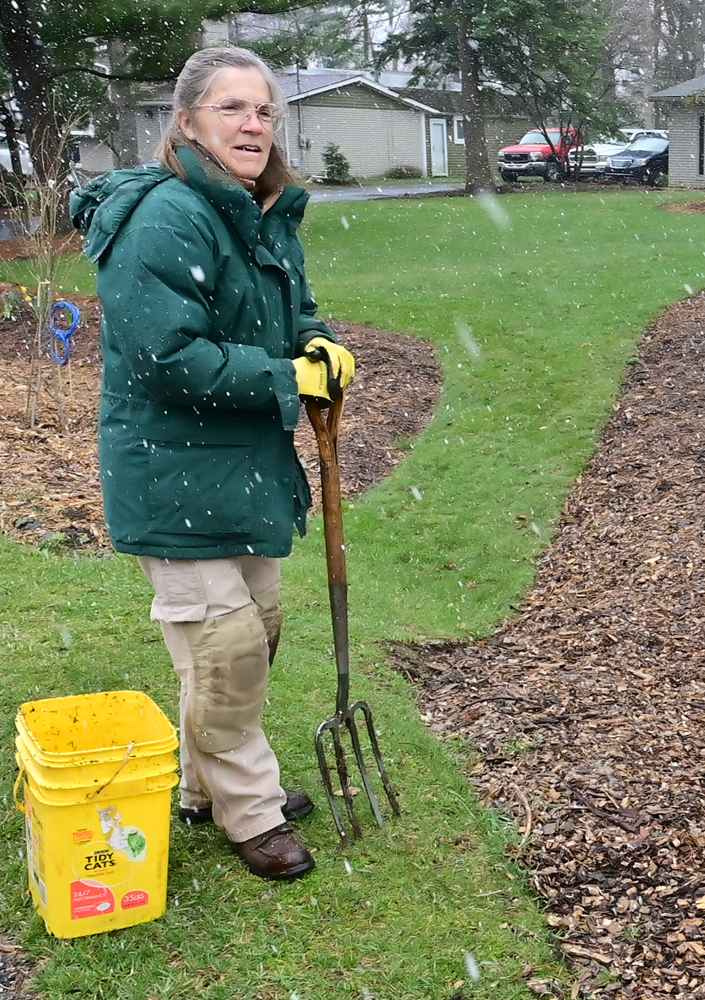 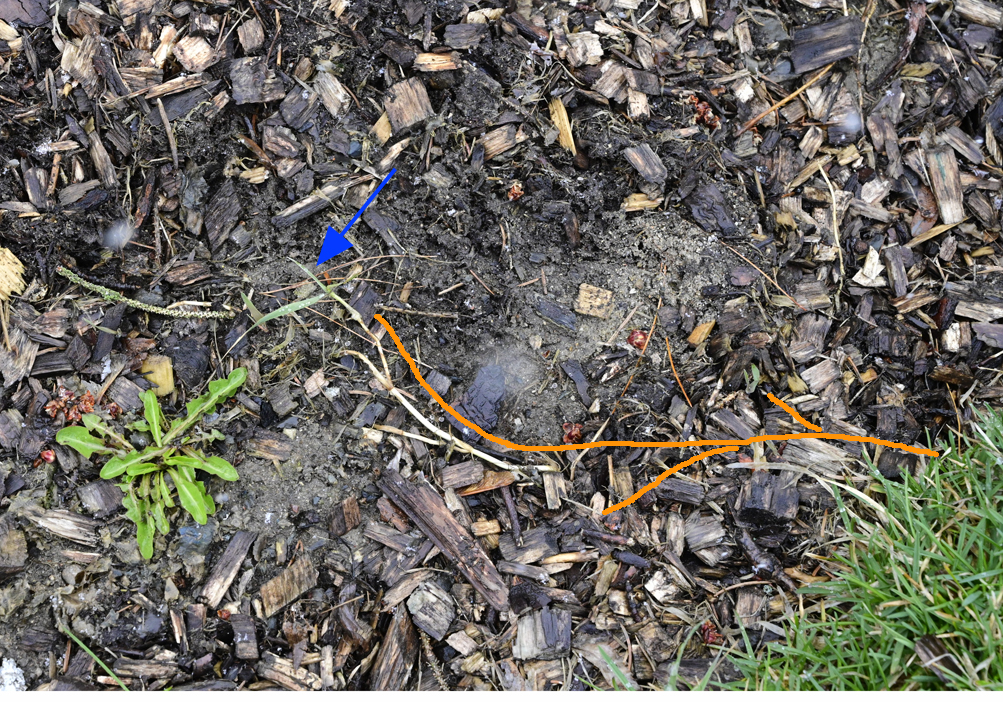 A grass has run (orange line) more than 12" into the bed. This runner has just turned its head up and produced leaves (arrow). Left alone, in no time this runner and others hidden in the soil will advance by root another 6".

We've talked about edging many times before so we won't keep bending your ear now. Now is high time for you to get out and hunt some weeds!