Click through five articles for a fine week in early fall

How much cold can a houseplant tolerate?

Thumbs up to seeing patterns: Problem is site not plant
Thumbs down to harsh words: Gentle words may grow a better garden

This week in our gardens

Grow with us! This week as the very first fall frosts come, we: 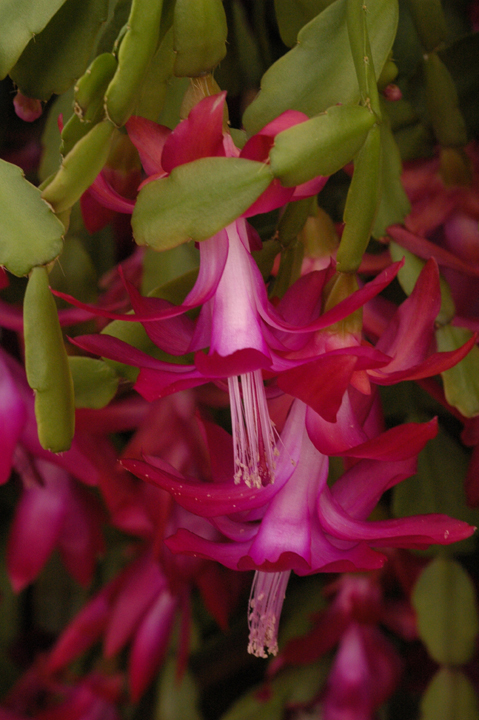 When first published this was a magazine format issue with five topics including the reason for this Christmas cactus' great bloom. We separated those five topics as we posted them here at GardenAtoZ, for quicker on-screen reference. This page will link you to all five.

Wave our banner that says "It's not too late to plant!" It's sad to see so many great plants being put away for winter at garden centers when they should be rolling out the door and making a great start in the landscape.

Not so long ago, it was common knowledge that fall was the best planting season. That changed, but not on account of horticultural evidence. Our own theory is that a certain very effective marketing campaign of the 1980's, emphasizing "spring!" spurred this change in America's gardening habits.

We remain convinced of the superior "take" of fall planted plants and the incontrovertible fact that such plants have two extra months head start or more over anything planted in spring. During that two months conditions are prime for root growth yet the plant does not have to place any new foliage in harm's way. The plant begins to become established before leafing out and is that much better able to handle next summer's heat and drought. So we're waving the banner as we buy and plant, hoping to help others see and cash in on the benefits. 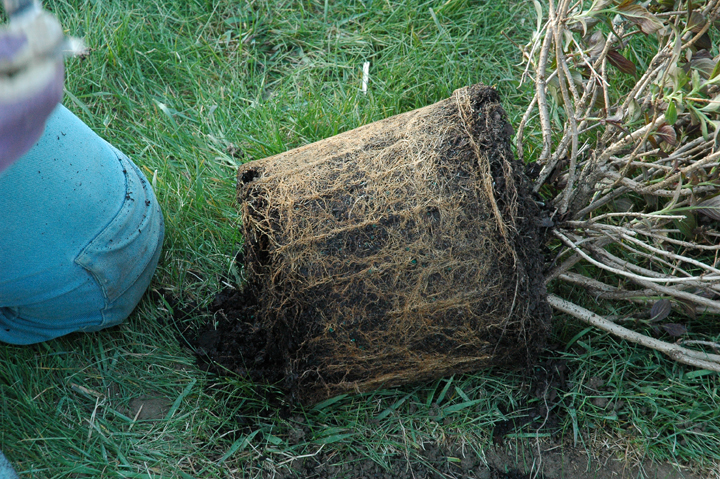 Here's a rootbound (pot-bound) plant. This condition is perhaps the biggest barrier to successful fall planting.

Ironically, such matted, restricted root systems are now more common in fall because changes in our buying patterns demanded that all plants be potted and ready to go by May.

We slice the bottom off any such matted root mass, as we've done for the plant in the picture above. Then we loosen and spread the remaining roots as we plant it. This gives the plant more drawing power right away by substituting well-spaced root tips for congested clumps. It can also mean the difference in the plant's long-term well being. Pot bound plants are more likely to dry out and die back over winter, and then to struggle for years. Some never break out of that growth-restricting pattern.

Bring in our jade trees, rosemary and other tender plants.

At least bring them closer to the house under the cover of the porch roof. From there it will be easy to pull them indoors if a freeze threatens, or tuck them against the house wall and cover them against frost.

Why not just bring them indoors and leave them in, now? Because we love to see it flower during winter and know the long nights help make that happen. its branches are never so full of blooms as when it's been out until late October.

We'll also take our rosemary up out of the ground where it's spent summer.

Outdoors, its foliage grows most full and flavorful. Yet out there in the sun it's nearly impossible to water its pot frequently enough to meet its needs. So we un-pot and re-pot each year.

We'll give it some words of encouragement as we place it back in its pot. During the next few weeks, still in full sun and thus full of energy, but cool enough now that its water requirement drops, it'll recover from any transplant stress.

Keep a sharp eye as we cut down herbaceous plants, looking for and staying ahead of problems such as that in the first question of today's column.

Be as aware of the beauty as the problems. In much of the eastern U.S. the fall show of leaf color is at least as reliable and long lasting as spring bloom so we try not to miss it. We take stock every day, and often gather leaves to send to friends in places less fortunate! (One of our most awesome collections for Janet's parents became a guide to help you select fall plants. What's Coming Up 64.)

Try to spread the slow release fertilizers we've selected for each garden before the leaves fall. We'd rather have it under than on the leaves that will blanket the beds. Beneath leaves there's more moisture and more microbial activity so the fertilizer will begin to decompose and release its nutrients. Little by little, nitrogen, phosphorus, potassium and humus will leak, crumble and be otherwise mixed into the soil. Fall rains will dissolve it and on every day the soil is not frozen roots will absorb those nutrients. 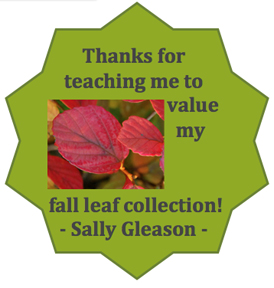 Thanks to our Sponsors, we help us build this site more quickly. Many Sponsors choose to aim their contribution at a particular topic or article. Click here for an interactive list of other articles Sponsors have recommended.

What's Up 208: Get the houseplants in order