Mulch has bugs and you should be glad 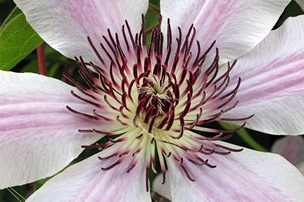 Last year a tree trimming company gave me chipped wood from my maple tree and also from pine trees which they had cut in the neighborhood.

I want to use this chipped wood as mulch to help cut down the invasion of weeds which I have each summer in a large green belt at the rear of my yard. I have now been told that the chips will promote insects, etc.

I would appreciate any information as to how I can utilize this wood to help cut down the weed growth and what I can do to it if, indeed, the wood will promote insects. - G.T. -

A mulch layer is alive with insects, as well as fungi and bacteria. However, this shouldn't concern you. In fact, it's downright thrilling if you're interested in improving the growing conditions for roots of trees and other desirable plants that grow in that soil.

The organisms that proliferate in mulch are decomposers - critters both microscopic and larger that break down  organic matter to its component parts. They are generally not able to attack living plants and have no interest in biting or bothering people. However, they do enrich the soil with their excrement. They also improve the soil's ability to absorb and hold two ingredients essential to healthy plant growth - water and air. This happens as billions of decomposers churn through the organic debris and top layer of soil, mixing and joining humus and minerals into loose, crumbly topsoil.

Two inches of mulch will reduce or eliminate crabgrass and other weeds that grow each year from seed, by burying those seeds deep enough that they do not receive enough light to sprout. In most cases mulch alone is not enough to control perennial weeds already established on the site - the likes of quack grass or Canada thistle that grow from roots formed the previous year. Established perennial weeds must be removed manually or killed before mulch is applied or they will just grow back up through the mulch. In some cases, a thick layer of newspaper covered with four or more inches of mulch can kill perennial weeds by smothering them. Decomposers then break down the  newspaper as well as the mulch.

Reading one of your past articles regarding clematis and that it's okay to prune them now: What and how much should I prune? Down to ground level or what? The plants grew runners approximately seven feet long last year and I have not touched them since last fall.

Also, should I fertilize them this spring? - T.H. -

Right: The advice, "Prune weak wood hard" is very good to have in mind as you clip a Clematis. These three pictures were taken on the same spring day to show you buds (left to right) at the base, middle and top of a Clematis cane. The difference in their sizes explains why a plant tends to become bare at the bottom unless you regularly cut some canes to the ground. It happens because the top buds on a branch grow first and command lower buds to grow less or not at all. When you remove the top buds the highest remaining bud -- even a dormant bud -- is released to grow more vigorously. 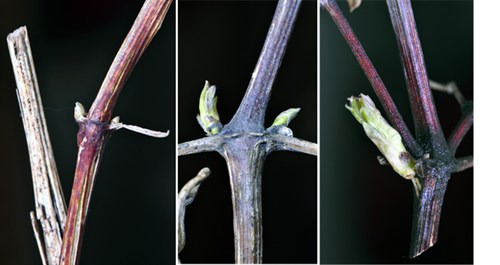 Clematis vines for cold winter zones can be divided into two types. There are 1) those large flowered hybrids that begin the season's bloom in June, and 2) those that don't start blooming until July or later. (Those with very mild winters have a third group, early spring bloomers such as C. montana.) Knowing which type you have is one key to deciding how to prune.

1) The large flowered hybrid types such as Henryi and Nelly Moser are the most popular clematis vines. These begin blooming in June, flower heavily for a few weeks, take a rest and then bloom again that same year.

Standard pruning time for a large flowered hybrid is in April, before the season's growth begins. Directions are simple: Remove one or more of the oldest canes, and cut the others back by about a third. Do both, in either order. This method of pruning preserves the first show since the June flowers come from wood that seasoned last year. Yet it also promotes a significant amount of vigorous new growth that will be ready to bloom in July or later.

Photos below: We clip out one or more old, thick stem(s) at ground level every year. Here we take out two, then trace those up into the tangle, clipping the cane and its side branches loose from the rest. We also clipped all the canes and their side branches by about a third -- a seven foot piece became just four to five feet long.

The vine before and after: 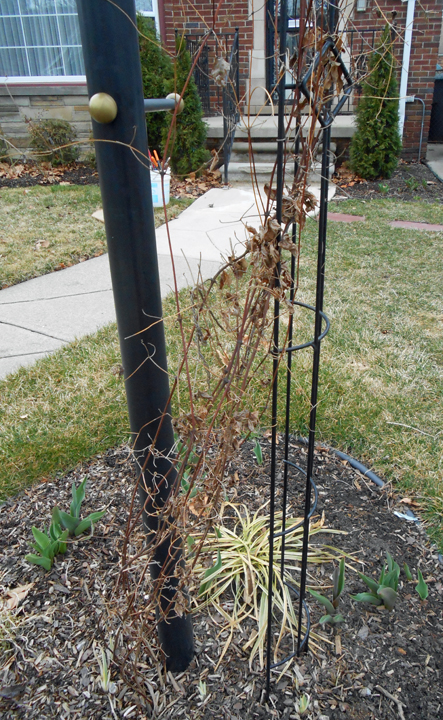 We clip out one or more old, thick stem(s) at ground level every year. Here we take out two, then trace those up into the tangle, clipping the cane and its side branches loose from the rest. We also clipped all the canes and their side branches by about a third -- a seven foot piece became just four to five feet long. 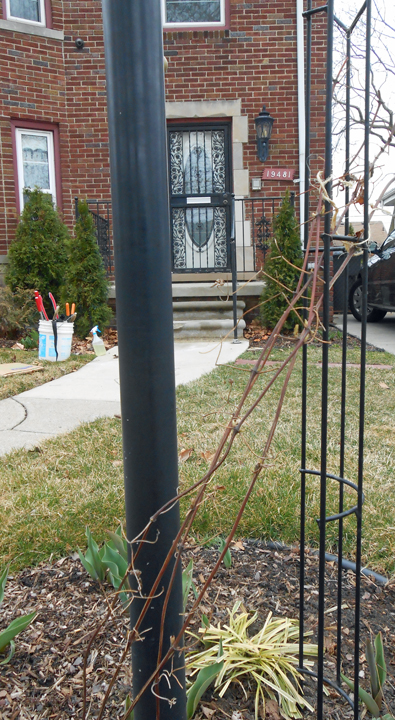 The base with and then without its oldest canes: 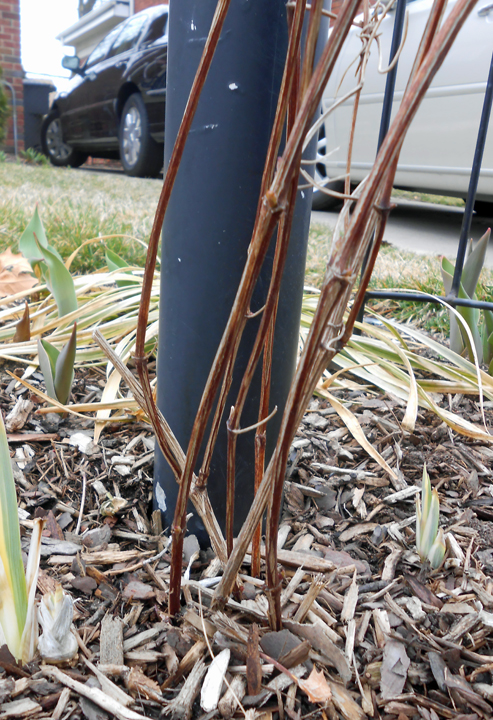 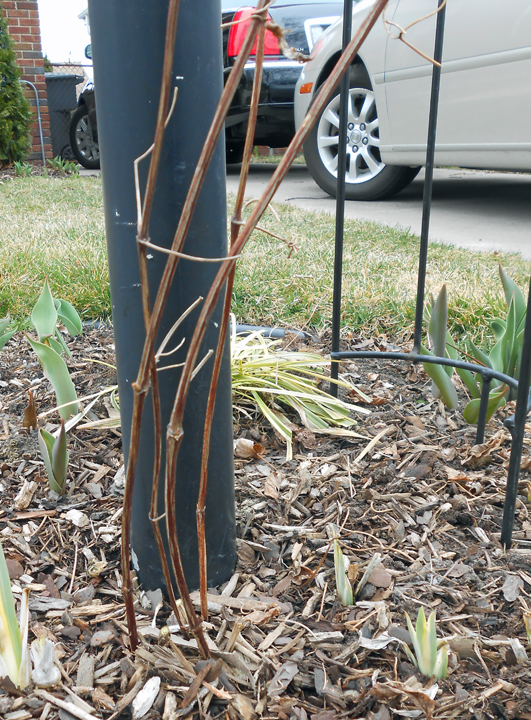 We removed all this. If the vine was not one of "ours" and thus cut every year, this first pruning might have netted three or four times as much tangle from the top, but about the same from the bottom. 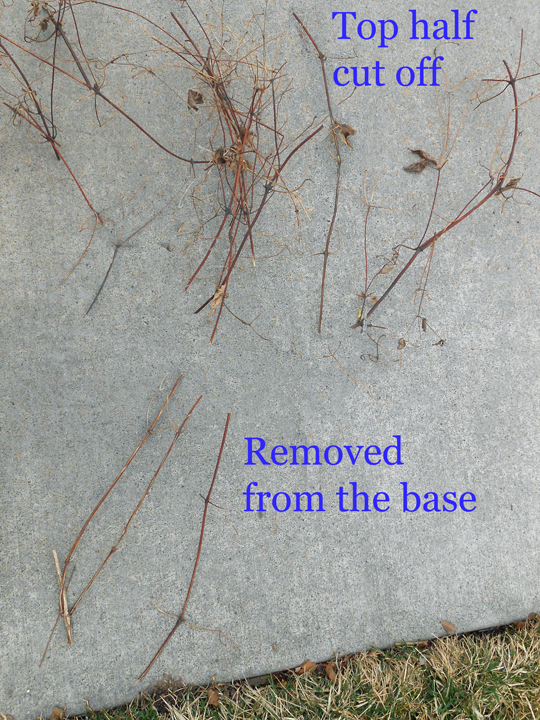 Pruning these later-blooming Clematis species can be the same process as for the large flowered hybrids but since they will bloom fully even if cut right to the ground every year, they are often used in ways that depend on hard cutting. For instance, if you want a clematis to ramble over a lilac, you might grow a Clematis texensis next to the shrub, cut it back in April so it's out of the way while the lilac puts on its spring show, then allow tendrils that sprout from the clematis' base to climb into the lilac where they will bloom in summer.

These standards, like all pruning rules, apply only if your aims are standard, too. If you have different reasons to prune then your procedure will differ. Cutting a large-flowered hybrid all the way to the ground means losing the June flowers for that year. Yet if you want to prune it back so you can move it to a new trellis and it's not critical that it have flowers on it that June, chop it to the ground rather than spend hours detaching and reattaching the vines. If your fall-blooming clematis can't be cut back to the ground each year because you wouldn't remember to follow up to train it back up into the  crabapple, then don't cut it at all or cut only the parts above the point where the vine first takes hold of the tree.

If you cut a Clematis to the ground, don't be surprised when new shoots come up in a surge, released from the control of tip buds. These three new shoots were on a single Clematis cane one spring day. Left to right, they came from the bottom, middle and top of the cane. The lowest shoot (left) is smallest because the largest shoot (right) has dominance -- it grows biggest, fastest and exerts control over everything below it. Cut off the cane to just above that smallest shoot and it will launch its own career as dominant bud.

to a late spring. The recent ice, snow and cold would have done far more damage if our gardens had been showing the normal amount of soft new growth for early April.

to moving weeds along with a transplant. If that plant has grass or another perennial weed growing in it, reduce it to bare root so you can see and eliminate all hitchhikers.

Many thanks to our Sponsor, whose
donation aimed at pruning topics
helped us post and illustrate this
and its related issues: 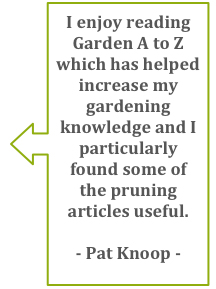