One person's tulip problem may be another gardener's dream

I have a tulip problem.

By spring I can never remember what I planted on my last bulb binge. So in 2003 when tulips came up where I thought I had removed all the tulips in previous years, I figured maybe I had forgotten my plan during the bulb frenzy of fall 2002 and planted new ones there. Also, sometimes one year blurs with another when it comes to the garden so I had to allow that maybe digging out the offending tulips was really a memory from many years before.

So last spring I dug them out again. Now I think I see them back again. I am almost sure I didn't plant tulips there last fall! And now it occurs to me that this has happened more than once before.

How does this happen? Does spontaneous generation apply to tulips? - D.G. -

It's not only a tulip's ability to tolerate cold that makes it a reliable perennial. Some species require drier, hotter resting conditions in summer than your garden can provide. Read here for some varieties better able to remain vigorous and in blooming form where summers are moist and the soil cool as in the U.S. Midwest

They can't wink into existence from another dimension but can leave pieces of themselves behind after they were once established in a bed. Let's say you dug around a clump of tulip foliage and lifted it out. If it's a big bunch you might leave behind bulblets without even noticing they broke away from the cluster of bulbs at the base. A vigorous tulip of a type that perennializes well, in a warm, well drained sunny bed can come back from a bulblet. It might even resume flowering the next year if you attempted to remove its parent clump in June or later, because its foliage had sunlight for all of April and May.

A very small bulblet can escape your notice for a year or two because it may be just one leaf among many. That's especially likely if it's among replacement tulips or perennials with leaves shaped or colored like tulip foliage. Every year it produces foliage, doggedly regaining size until it can bloom again. That's when you finally see it and wonder where it came from.

In our own garden, two groups of 'Emperor' tulips have shown remarkable powers of escape and rejuvenation. When we changed color scheme in the overall garden, we banished them for being red and yellow -- or thought we did. Over ten years we dug out three or four red or yellow recurrences. It's been years now since any of them returned. We think they our will may finally have prevailed.

Below: We've noted that the classic cup-shaped tulips are more reliably perennial in the Great Lakes region than lily-flowered and ruffled parrot varieties.

Where are such bulbs when we want them?!

Some people plants tulips only to have them wane or disappear after just a year. They may want to know which bulbs you and we have that are so tenacious.

In trials to test the staying power of tulips, North Carolina State University determined that some are better perennials than others. Some types that proved themselves likely to last three years or more are the yellow-, red-, white-, or orange 'Emperor' and the various colors of Appeldoorn. Watching tulips for 30 years in Michigan gardens, we agree but also see a more general rule in effect, that the earlier the tulip's bloom time, the more likely it will be back. We rely on:

Conversely, we have learned to treat parrot-, lily-flowered (below, right), streaked or "broken" varieties as annuals. We enjoy them but remove them after bloom. 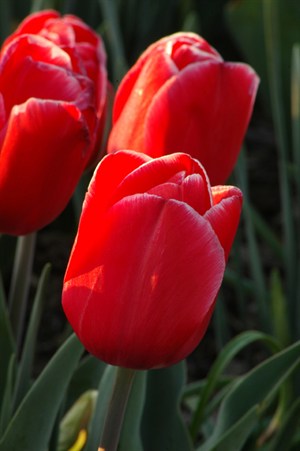 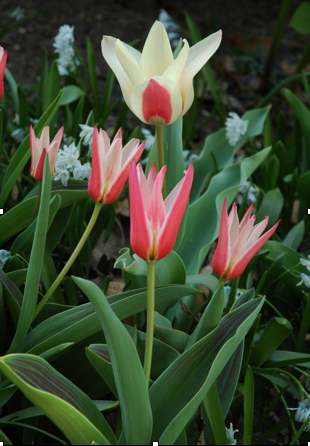 Kaufman tulips are sometimes called water lily tulips for their flower shape. We recognize them and the equally-reliably perennials, Tulipa Greigii, by the maroon ribbing on their leaves. 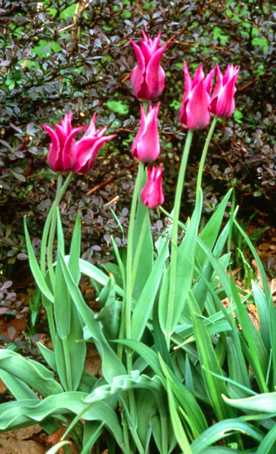 We treat lily-flowered tulips as annuals. They rarely bloom more than a year or two where the soil is cool and conditions moist in summer. It may be that the species that dominate in these hybrids evolved for summer-desert, winter-cold climes.

One last thought. Animals can transplant bulbs. Squirrels are most likely to do this, but chipmunks can, too. I've also known dogs to redesign bulb beds.

...says R.S., snipping buds and small branches then chewing bark until the main limbs were left blazing white. It was a bad rabbit winter, R.S., so many of us are feeling your pain.

If there is good wood below the damage, use loppers and saw to cut the shrubs back to that point. Remove all the chewed wood, even if it leaves the plants just three inches tall. An established dwarf burning bush that's otherwise healthy and in good light can go from stubs to three feet tall in one year after being stumped back. Cut now. If allowed to try and leaf out from above the damage the same shrub will limp and even die. 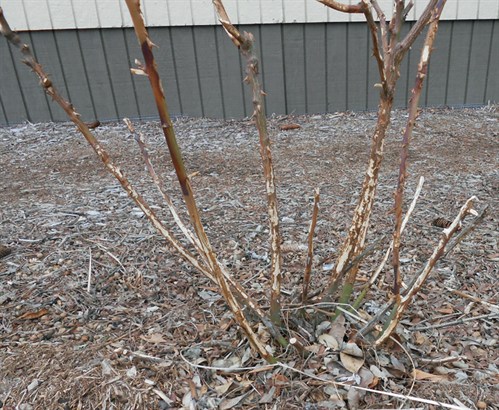 ...if you see meandering troughs on the soil surface, tunnels just below ground and burrow entrances the size of a fifty cent piece, as reported by R.N. of Mt. Pleasant. Standard mouse traps and poison baits (see Growing Concerns 462) work but use them soon, since two voles can reproduce repeatedly in one summer and see their offspring reproduce, too, so that spring's two become August's one hundred root- and crown-eating diggers. No exaggeration. Farmers call it a "mouse year" when the vole numbers spike this way.

to fellow gardeners making you feel good. When I moaned about forgetting people's names after just moments but recalling plant names for decades, they gave me an out. "That's the way it should be," Said Shirley Sandner. "You can always ask a person their name but you can't ask the plant!"

to fighting the inevitable. If snow repeatedly crushes your azaleas, daphne or holly, replace those spring blooming evergreens with shrubs that will still flower this year even if cut back hard. Try white snowball hydrangea, panicle hydrangea, or Ural false spirea which can go from stumps in April to blooms in July, even in part shade.

Many thanks to our Sponsor, whose
donation helped us illustrate this
and its related issues: