Once a perennial bed is planted, how does one go about supplementing the soil without disturbing plants and bulbs that are planted there? What else besides top soil and peat moss can be used? - E.G. -

Perennials wear out the soil, just as any crop does. They're billed as "low maintenance" by some promoters, in part because soil renewal and replanting isn't an annual affair as for soybean fields or annual flower beds. Yet it still has to happen. You have two options: Do a major periodic renovation every 6-7 years, or maintain the bed so the soil constantly renews itself. 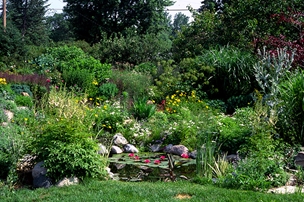 Perennial beds do need periodic renewal. We have a big garden and no desire to take on the big chore of renewal every 6 or 7 years so we give it what it needs to continually renew itself.

Fall and early spring are both good times for major renovation. "Early spring" is as soon as frost and excess water leave the soil. That may be in March or April in some years in sunny, best-drained beds but as late as May in some shadier, damper spots.

To renovate, dig up all the plants and bulbs, and set them aside. They'll be fine above ground for a few days or even a few weeks, so long as they're in the shade and have enough soil or mulch on their roots to keep them from drying out. Weed the bed well and loosen it to a depth of 18 inches. Spread a four-inch layer of compost or peat and mix it in. Water it to let it all settle, then replant.

The critical element in this renewal is organic matter, the soil's water and nutrient reservoir. It's constantly breaking down, being incorporated in its component parts into living plants and then carried off when we weed, deadhead, divide and cut back. As organic content drops, so does a garden's beauty and productivity.

Easier on the back: Natural renewal

The complete overhaul is a good way to replenish organic matter in one session, but we prefer the low-tech, low-sweat way of natural renewal.

This constant renewal starts with organic mulch applied on a regular basis. A two-inch layer of mulch in direct contact with the soil breaks down slowly into humus and then into soluble raw materials plants can absorb. The soil animals - worms, bacteria and the like - that decompose the mulch also drag it into the soil, mixing it in even deeper than 18". The best mulches are shredded leaves, pine needles, grass clippings, cocoa hulls, and finely shredded bark. These break down within one season, so you have to top them up as they decompose to less than two inches in depth.

In addition to mulch, add organic matter at every other opportunity. If you're like most perennial gardeners, you divide and move plants a lot. Every time you do, mix in compost or peat  to bring the disturbed area back up to level. Top soil is not a sufficient replacement, since it supplies only a very dilute form of organic matter.

You can start renewing your beds this spring by applying compost or peat and weeding thoroughly with a garden fork. This loosens the soil to the full depth of the fork, and creates cracks in the soil so the organic matter can filter in more quickly.

One final, essential step in both renovation and constant renewal is a complete soil nutrient test. It will tell you if the soil needs fertilizer, and what type.

Contact your Extension office for a soil test kit. It probably costs less than twenty dollars but nets you information that private testing services sell for one hundred. Most Extension test kits consist of a pre-addressed cardboard box and directions for filling it with a soil sample. You mail it to your land grant university (such as MSU in Michigan) to be analyzed in their soil labs.

Test results will show your soil's texture, ability to hold nutrients, amount of available nutrients, and pH (relative acidity). They're routed back to you via your horticultural Extension agent, who translates them into an exact fertilizer and soil treatment "prescription."

Box elder is a maple by any other name

I'd like you to help settle an argument about box elder trees. My friend sells firewood and considers this type of wood to be garbage, undesirable, not "premium" firewood. I've been carving whistles out of the fresh summer shoots since I was a child. So we're far from being "tree illiterate!" But neither of us has any scientific basis for our opinions in this case.

Here's the issue. I have noticed great similarities between these trees and the silver maples also prevalent in the area. I told my friend I believe box elders are a type of maple. He says "No way." - J.B. -

Box elder, also known as ash-leaf maple, is definitely a maple. It's Acer negundo, grouped with red maple (Acer rubrum), sugar maple (Acer saccharum), silver maple (Acer saccharinum) and others based on its flower and seed structure. Look at the seeds, which form in fall and persist through winter, and you'll see the resemblance to the "helicopters" of spring-fruiting maples.

We have no experience with burning or making whistles of the wood, but have logged lots of hours pulling its seedlings out of flower gardens. It produces a prolific seed crop, and grows like lightning, as much as five feet per year. But though we cuss it for its incursions into our gardens, we don't wish it gone.

It's a native, important in our local ecosystem. It will grow almost anywhere, and is especially good on wet soils where, a mature tree can pump a thousand gallons of water per day up into its canopy. This lowers the water table so that other species can inhabit otherwise swampy ground. Also, the seeds and young shoots are an irreplaceable winter food source for dozens of bird and mammal species.

Early risers for the bloom calendar

You asked to hear what's blooming -- snow crocus (Crocus minimus) and dwarf iris (Iris reticulata) are blooming in my yard this week. Did you want to hear about trees and shrubs, too? Though my pussy willow isn't blooming it's at that pre-bloom stage when the furry, grey buds are at their prettiest. - M.N. -

Thanks! In addition, we have noted the tiny gold cups of winter aconite (Eranthis hyemalis) and snowdrops (Galanthus nivalis).

Yes, we included trees and shrubs in our bloom calendar. Based on our own observations and notes like yours, we published a comprehensive chart of what blooms during each of the 36 weeks of our flowering season.

To see the bloom calendar, Quest for Color

As of this update, we have not yet formatted the bloom calendar for posting on the site. It is in the queue to be posted. There's the chance that when we do post it we'll have forgotten that this paragraph should then be updated. So do a Search of the site for quest bloom calendar to see if it's "up." Meanwhile, it is available on our CD Asking About Asters. 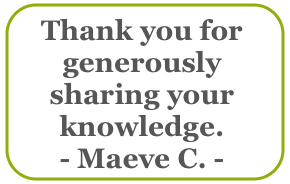 Click to read other pages recommended by Sponsors.
Please Sponsor us! It's simple, quick and inexpensive to help us keep this resource growing.