We are still here with the non-blooming peony problem.

You came out in 2001 to look at the peony I'd transplanted that stopped blooming. I don't know if you did something to the peony but it bloomed the next year. But it didn't bloom last year and doesn't look like it's going to bloom this year.

All my other peonies bloom every year.

I took photos, leaf samples, a soil test, made notes on the peony's location and checked its planting depth but I doubt that influenced its bloom. My visit was to have been part of a quick look at several peonies to try to identify the reason(s) they stopped blooming after transplant, with special attention to whether that old peony bug-a-boo, planting too deep, affects flowering.

That quick study became a long-term venture. The number of variables was too great at those original sites. I had to set up more controlled experiments to test the leads that came from looking at those first peonies. I can't draw conclusions yet but I can tell you one thing you can discount and two to look into.

First, don't worry about planting depth. I saw a range of planting depths, with no consistent correlation between depth and blooming. Transplants were blooming with three inches of soil over the roots yet others under just one inch of soil had no flowers. So I suspect deep planting does not prevent bloom, except perhaps if a root is planted many inches too deep. Even there, since next year's buds form at the base of this year's stems, the plant may adjust itself to proper depth.

Second, a number of peonies I saw were sited where warm sun will follow immediately after early morning spring frost. That's a formula for tip damage, and to lose the tip of a peony shoot is to lose the flower for the year. Morning shade is better for peony and other plants sensitive to frost damage. There they thaw gradually with less chance of cell rupture. 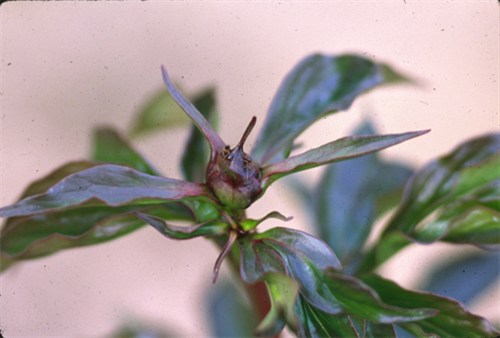 Most importantly, I saw botrytis, a fungus infection, on all of the samples. My best guess is that botrytis is the main reason a transplanted peony doesn't bloom. Weakened by loss of root yet carrying with it the ubiquitous Botrytis paeoniae fungus spores, the transplant is prone to infection, especially in frost-damaged tissue. It loses its tips with their embryonic flowers.

Perhaps your peony bloomed in 2002 because conditions were less frosty and drier. Tips weren't damaged and fungi didn't spread so readily.

Check for botrytis infection now, and curtail it. Look for tiny, brown, dry buds on tips of stems. Clip them off -- they died of frost damage and/or botrytis and carry contagious spores. Remove any flowers as they fade, since dying petals are also sites of easy infection and later contagion. Then keep an eye out all season for purple splotches on leaves and streaks on stems. Cut all of these off. Don't worry if that removes big chunks of the plant. Better that then an infected line on the stem works its way down to the root, where the fungus spores will rest and reinfect next year's shoots before they even break the surface.

Do all clipping on dry days when spores are less likely to spread.

In fall, before the peony dies back on its own, cut it back to ground level and remove the debris to a hot composting site. Next spring, treat emerging shoots with a fungicide or an anti-desiccant to protect them from infection. Cover them on cold nights to minimize frost damage. Do this for a season or two and the peony will be able to build up enough energy in its new site to manage on its own like it did once before..

Dogwood didn't bloom, though it has every year until now?

Many things can affect budset and flower bud retention on a dogwood. Early freezes in fall, dry winters, and late spring frosts can kill buds. Loss of a big tree nearby can expose the smaller tree to frost and drying winds. Maturing trees and new buildings can reduce sunlight so flowers never form.

When a dependable tree fails to bloom, I look to see if buds set and then died, which may mean winter weather or a change in exposure is to blame. If buds didn't form at all, I investigate growing season differences such as root damage, increased shade or changes in watering and fertilizing.

I'm about to cut back severely on early daisies, swamp buttercup, hardy geraniums, columbine and many others that are past their prime bloom. My reward is fresh new foliage, a neater garden and, sometimes, more bloom. To improve the health of my garden I also clip off spent flowers and failed flower buds, which are potential disease sites.

to the dry years that introduced so many people to drought tolerant plants such as mullein. But thumbs up, also, to a return to moisture so we can enjoy greater variety.

to removing a tree without weighing all the changes that brings to an area. For instance, removing just one tree on a busy street can double noise levels that reach homes there.