Growing Concerns 620: Elderberry on lot line, peat in a garden, toads in forget-me-not

Nostalgia and the nose lead to native shrub, elderberry

In an article recently you mentioned the American elderberry. My mother remembers elderberry growing in the fields near Clinton, Michigan. 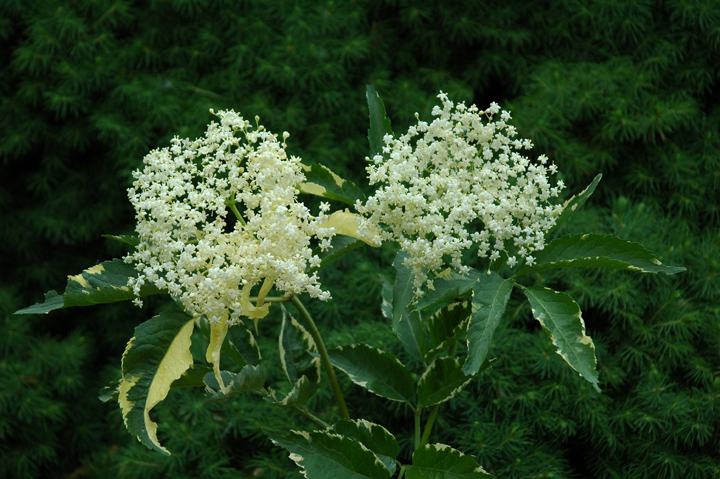 The European elder in our garden is blooming right now. Some say the off-white lacecap flowers have a disagreeable odor. Out in the open, we enjoy the sweet scent, but admit it can be overpowering if you cut the flowers and close yourself in a room with them. This variety is 'Madonna' with creamy white splashes on the leaves, and some leaves entirely white.

Can these elderberry bushes be bought and planted in a back yard? Where can we  buy them? -S.B. -

You can certainly grow American elderberry (Sambucus canadensis). It's native throughout the eastern U.S., all through Michigan and along the Canadian side of the Great Lakes and St. Lawrence Seaway. All you need is a place that suits it, which is where the soil is loose, the shrub will have at least 3 hours sun each day, and there is room for it to spread to 10 or 12 feet tall and wide. The more sun it receives, the fuller will be its bloom and fruitset, and the greater its need for water. It's most floriferous in the wild when it grows in full sun along the edges of marshes.

Perhaps you'll follow the lead of many enterprising people, from native Americans to settlers and modern day naturalists, who have used the flowers and berries as food and medicine, fresh as well as in vinegars, preserves and wines. The purple-black berries ripen in August. You may have to cover the plant with netting to keep the birds from harvesting them ahead of you.

Finding the plant requires some dedication. Many garden centers restrict their inventory to varieties of the European elder (Sambucus nigra). It's similar in many ways, including its edible fruit (shiny black rather than purple black). In fact, some taxonomists categorize our American elder as a subspecies of the European. Yet there are important differences, such as the European's bloom season, several weeks ahead of our native, and its potential to be twice as tall as its American cousin.

It's understandable, even if frustrating, that garden centers choose to carry the European elderberry. Like many other species that have close cousins east of the Atlantic, American elderberry is a relative newcomer to horticulture. There aren't so many "options" available when you buy one. The European species has been in production much longer. During those extra centuries of horticultural attention a greater number of forms were isolated and cultivated. So there are white-, gold- and pink-variegated European elders, others with purple leaves, lacy leaves, and some with flower clusters twice the normal 8-10 inch diameter. 'Black Beauty', relatively new on the market and widely available, has dark purple foliage and lacecap flowers that are pink in bud.

Sambucus canadensis is available in its standard form, a gold leaf variety ('Aurea'), a red-fruited form ('Rubra'; not to be confused with the separate native species, Sambucus pubens, which has red poisonous fruit), and a large-fruited form ('Adams'). To buy American elderberry, go to a native plant nursery such as Michigan's own Wildtype Native Plant Nursery, 900 N. Every Road, Mason, Michigan 517-244-1140, www.wildtypeplants.com. Or order by mail from Forestfarm, www.forestfarm.com, 990 Tetherow Road, Williams, OR 97544-9599, 541-846-7269.

One important tip. Once an elderberry is established in your yard, which can happen in a year or so given this species' fast growth rate, cut out an old trunk or two every April before bud break. Prune them off right at the ground. New canes will sprout from the base. This removes canes as they become thick and woody enough to support the borer that is the species' most destructive pest.

Do you recommend the use of peat as a soil amendment for flower beds? - G.K. -

We don't often use packaged sphagnum peat (Canadian peat). Sometimes when we see that the soil requires organic matter and are working where there is no ready source of compost, we'll use peat. But its cost is relatively high -- to us personally, in dollars and to the world in natural areas disrupted and energy consumed in its harvesting, packaging and shipping. Also, using peat takes extra effort, as we must wet it thoroughly before adding it to the soil. If we don't put it into a wheelbarrow and knead water into it before mixing it into the bed, we are very likely to find useless, bone-dry peat chunks in that bed even years later.

I'm interested in the plant surrounding your cute little toads in the picture in your Growing Concerns #616. - L -

That's creeping forget me not (Myosotis scorpioides), which forms a mat in the garden along the edge of our pond and creeps out into the water just as it does along streams all over eastern North America. (Although it's not a native, it seems to have been here since the 1400's, perhaps introduced by Viking colonists.) 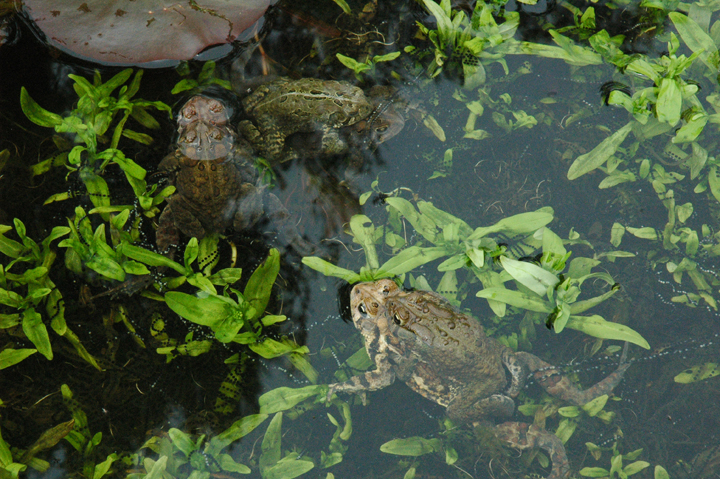 We enjoy answering questions you send our way. However, some problems have no solution. Don't expect much help from us if you pose a "stumper" such as: Sometimes I plant two of something, one that's where I will see it every day and one that requires a special trip to see, such as way in the back of the yard or at my mom's house. Why is it that the one I don't see every day is the one that ends up being prettier?

Below, right: Climbing hydrangea in bloom. This climbing hydrangea (Hydrangea anomala petiolaris) is pretty and we appreciate it every time we look out our kitchen window. Yet the one we planted way 'round the yard at the side gate we hardly ever use is even more beautiful!

This week in our gardens

Grow with us! This week we:

Cut some flowers and attractive foliage from the garden, take them indoors and arrange them in simple combinations in vases. We'll make notes in the calendar or journal about which look especially good together. Sometimes, arranging in vases is the only way we can see some plants together, such as when we team up the flower of a water lover with leaves from a plant that must have periodically dry sandy soil, or a shade lover with a sun lover. But if a pair or trio we arrange are suitable for growing together, our notes will remind us to plant them that way the next time we're re-doing a bed or starting new. 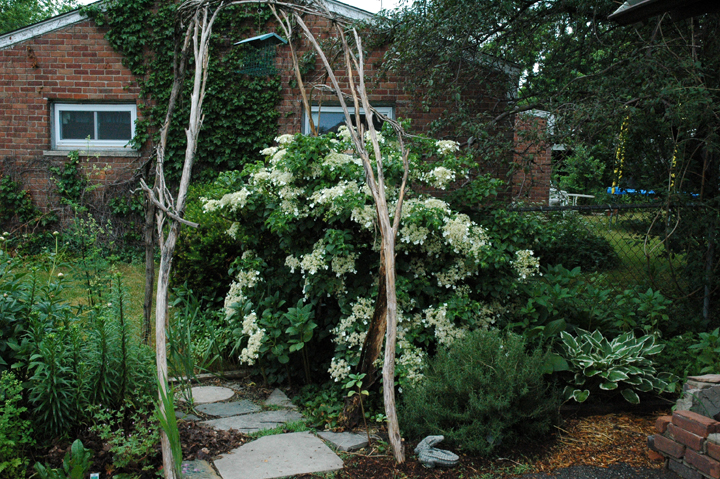 False indigo (Baptisia australis) in bloom is stunning with a background of purple foliage. (Here, it's red-leaf barberry.)

Cut back some spring blooming plants. The early June heat spell brought the bloom season of many of these to a close. Now we cut them back hard, to the ground in most cases, sparing only the newest foliage and shoots emerging from the base. This removes stems and seed pods that would turn brown and spoil the show of later-blooming plants nearby. It also reduces the number of seeds that drop in a bed, every one a potential weed.

Some of the plants we cut hard in June go dormant for the season, but come back next year. Others reward us with a second bloom or a new flush of fresh foliage. In our garden we're cutting catmint (Nepeta Mussinii), lupines that are not my selections for seed production, swamp buttercup (Ranunculus acris), perennial bachelor button (Centaurea montana), oxeye daisy (Leucanthemum vulgare), poppies (Papaver orientalis) and columbine (Aquilegia varieties). 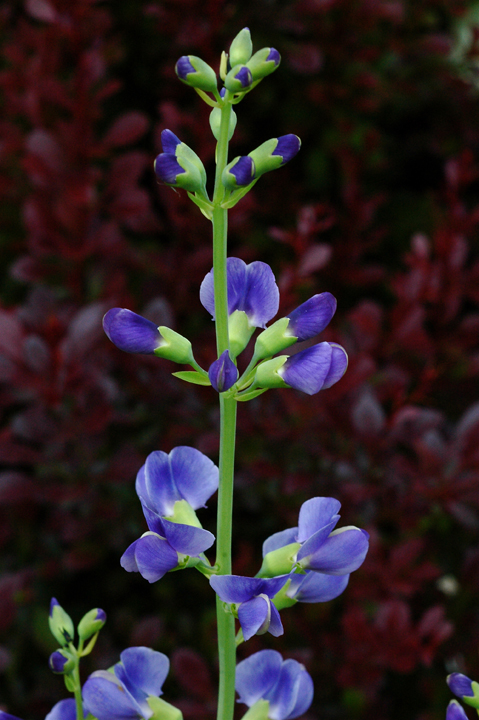 Cut down foliage of spring bulbs where it's become distracting. Sure, we hear we should let the leaves turn yellow and fade away on their own, but that's advice that comes from growers. Growers want their crop to have every bit of starch the leaves can produce and the longest possible growing season so that the young plants they set out will become the biggest possible bulbs for sale that fall. Most of us don't need our bulbs to become bigger, as they are already of blooming size. If those bulbs grow the full season, they increase -- split into multiple bulbs -- become crowded sooner and need division to keep flowering well.

What we want from our bulbs is that they replace themselves, which they have had plenty of time and energy to do already. So beginning in June we cut away tulip and daffodil foliage with abandon, if its look doesn't please us.

Feed the soil, especially around fast growing plants that we cut back hard on a regular basis. All that cutting removes from that spot the minerals that went into making those leaves and stems. Vegetable parings are excellent renewal material. We pull back the mulch, spread kitchen scraps on the soil (no meat, unless you want animals to dig in your beds!), then put the mulch back over them. If they're too lumpy to cover neatly, put a sheet of newspaper over them before replacing the mulch.

Peelings spread, being covered with newspaper. These peelings will add slow release potassium, phosphorus, iron, magnesium, manganese, zinc and copper. If we don't want them to show and they're too lumpy to hide neatly with mulch, we cover them first with a single
sheet of newspaper. 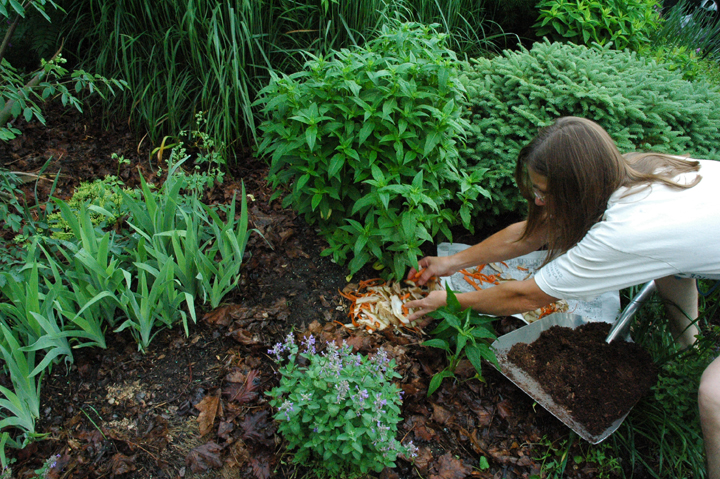 Carrot and potato peelings ready to go into the garden. When we make a stew, we end up with over one pound of peelings from carrots, potatoes and onions. To throw them away is like tossing away 50 cents and denying our garden the good they can do there.

Covering the peelings with mulch. We replace the leaf mulch that was there to begin with and augment it with some composted woody fines mulch. 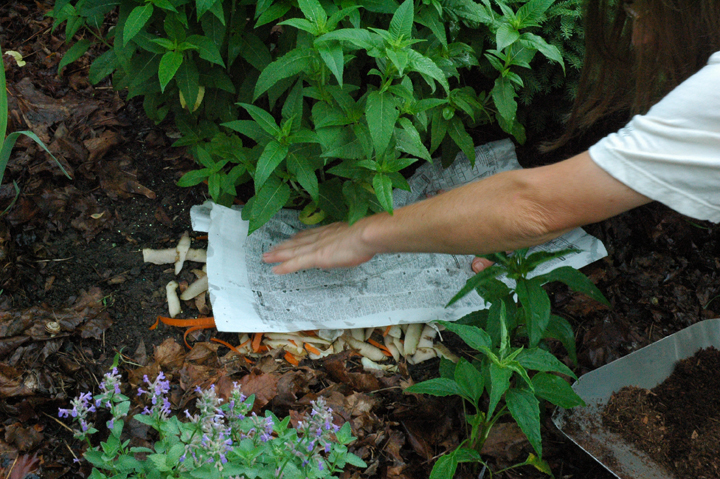 Peelings hidden, spot in garden returned to normal.  Now, who can tell what's going on at the feet of this bee balm? No one will know except the worms and the soil animals that will digest the parings and release their nutrients to the plants' roots. 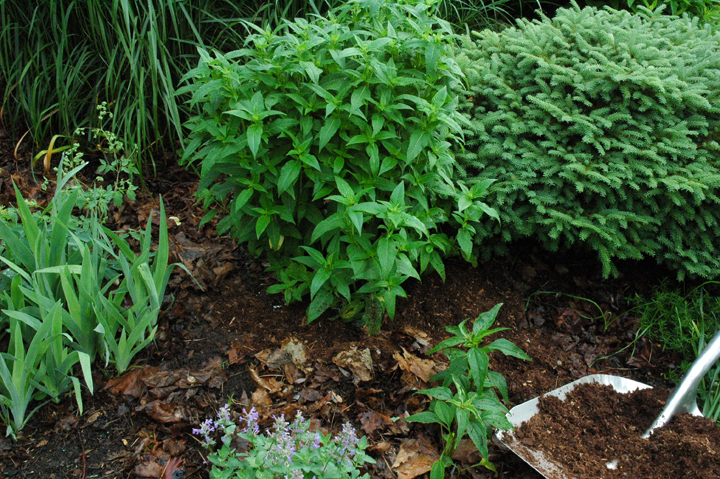 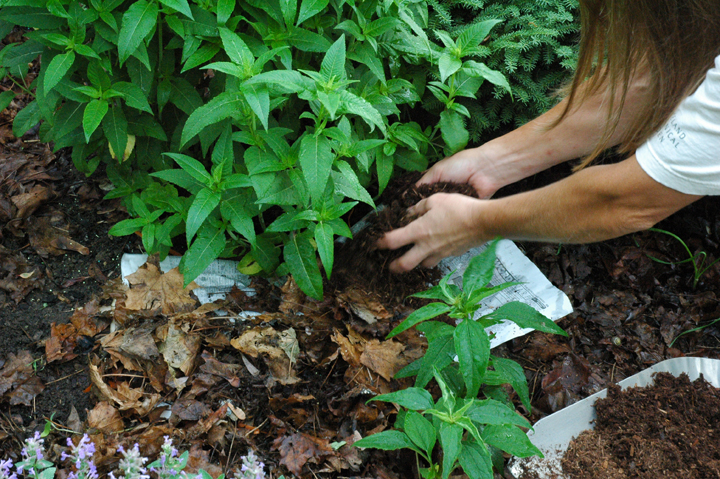 to garden center managers and employees who are confident enough of their own value and our loyalty to say things like this (overheard as Scott Bates at Grass Roots Nursery in New Boston helped a customer), "No, you don't need to buy a new filter. No sense spending your money on that. I think you can just adjust your pond's pH to clear the water."

to butterfly houses as commercial attractions. Certainly it's good to teach children about the metamorphosis of caterpillar to butterfly but how many of those children will never be shown the real thing in gardens, fields or nature centers? What a sad thing it will be to hear the next generation of adults say, "I'd like to see some butterflies. Let's go to the mall."