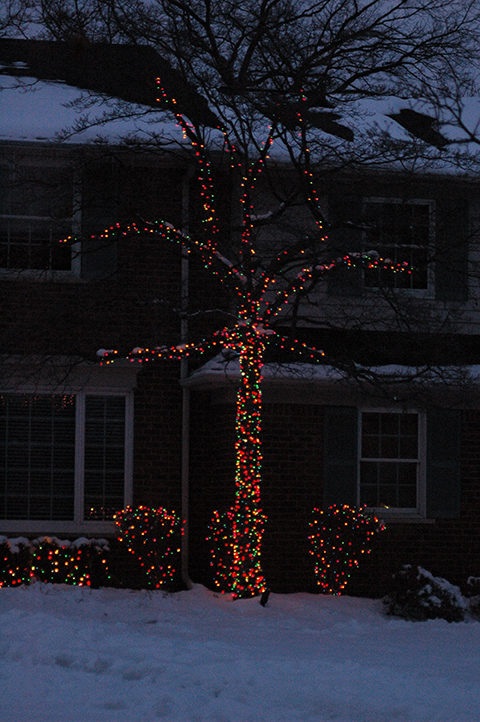 Consider your plant's health while putting up your holiday lights.

There must be about 100 flowers budding everywhere my Meyer lemon tree can possibly force them out. There are several clusters with 10 to 25 buds. There's a beautiful scent as well, that reminds me of orange blossoms. There are so many buds I will have to pick some off, so that I might have a handful of lemons growing well this winter.

I didn't spray it before I brought it in for winter. Is there an insect that produces a nectar-like substance? This happened last year. I thought it was from the fruit but I see the substance appears on the leaves and flower buds.

Mmm, how great to have the house smelling like citrus!

We'll guess that nectar-like substance is sticky and clear, at least at first. Over time it can turn branches, leaves and tabletops sooty black. Shiny dots on parts of the plant and on surfaces below the plant are probably excrement from scale insects. We call it "honeydew."

Scale can afflict many interior plants but citrus are especially susceptible. Some of the insects are there all the time but can't multiply until the plant becomes weaker in winter's dim light and a home's dry air.

Look for the scale to confirm that's the problem. They may be flat brown ovals on the leaves, concentrated near the leaf's midrib and where it attaches to its stalk. If the population build-up is very recent, you may need a magnifier to see the younger insects, which are tiny, nearly clear, flattened and congregating in those same places.

Kill them by cleaning the leaves and twigs well with a mixture of water, oil-based soap (Murphy's, Lestoil, etc.) and rubbing alcohol. We use one tablespoon of oil soap and a half-cup of rubbing alcohol per quart of water. We'd say to spray it on but that can affect the flowers, something you probably want to avoid.

Wipe it clean twice more over the next two weeks and you should be well ahead of the problem. After that, you can just keep an eye out for honeydew and clean the leaf above those spots. If you can, move the tree into a cooler area with more light. Then it will be better able to produce its natural defensive chemicals.

Wash your hands after cleaning or petting your lemon tree, before you touch other plants. Some types of scale are not choosy about the species of plant they live on.

For information about another citrus plant insect problem click here.

Brown burlap not the answer for brown arborvitae

We have a line of arborvitae running east-west. Their south side gets burned every year. We live near the water and wind is a problem.

Last year we put up a 7-foot wall of burlap on the south side but the scales or needles were still browned and when they fell off the trees looked like heck most of the year.

Is there an alternative to the burlap? Will anything work? Other than the browned areas, the trees are in good condition.

Arborvitae (Thuja occidentalis) is not adapted to living in the wind. There are things you can do to reduce the damage but if the work involved is more than you can manage or doesn't net a significant improvement, you should switch to a wind-tolerant species like red cedar (Juniperus virginiana).

Until the ground freezes, water the hedge regularly. Trickle water to soak the ground well, from the trunks out several feet in all directions. Mulch that area. If it slopes away from the plants, find a way to level it so water will soak in rather than run off.

Apply an anti-desiccant such as Wilt-Pruf to the foliage shortly after the ground freezes, on a day that's 40 degrees or warmer. Renew this protective coating during the February thaw.

Place your windscreen at least three feet away from the arbs. If the screen is closer, the arbs' foliage can be chafed by both the material of the screen and the pocket of turbulence that exists immediately downwind of a windbreak.

In early spring, remove the burlap, rinse the foliage well, resume watering and fertilize. Occasionally during the summer, mist the foliage on that side.

Horticulturists involved in big winter light shows, such as those at Longwood Gardens in Kennet Square, Pennsylvania, pay attention to how lighting routines affect the plants. They know to:

Prevent compaction. They protect the ground where people walk to place the lights, or loosen the soil there after each placement and removal.

Avoid using the same limbs as perches and anchors year after year when placing lights in the heights.

Never leave wire twisted around limbs beyond the season of lights, since it can interfere with and even prevent growth.

to volunteers for all their tree planting efforts and successes, and for reminding residents to water their new trees well before the ground freezes!

to non-gardeners who exclaim, "Not another houseplant!" over every cyclamen, poinsettia or amaryllis we bring home. We don't begrudge you all the video games, DVD's and doo-dads that are your winter distractions!