This page is Sponsored by:

Download the pdf to read the complete issue illustrated here 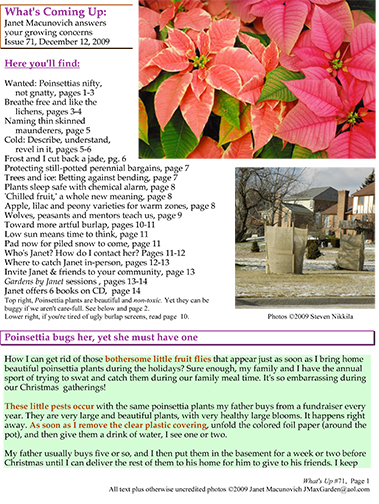 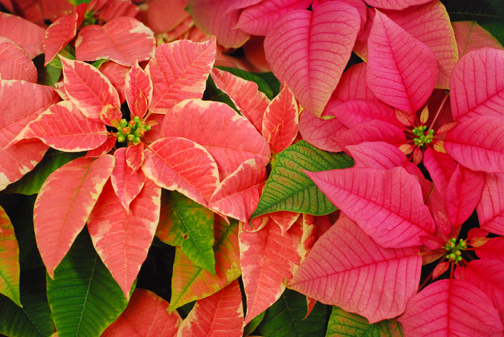 Poinsettia plants are beautiful and non-toxic. Yet they can be buggy if we aren't care-full.

Relax and enjoy the lichens 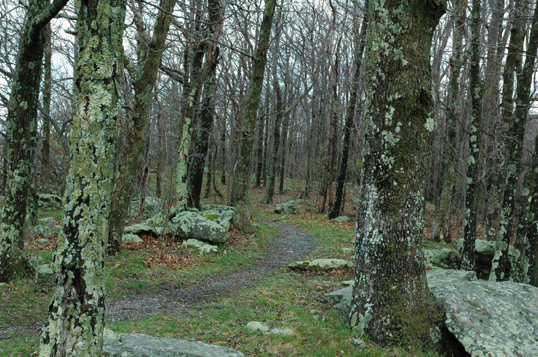 Lichens in the woods, on trees and also boulders. 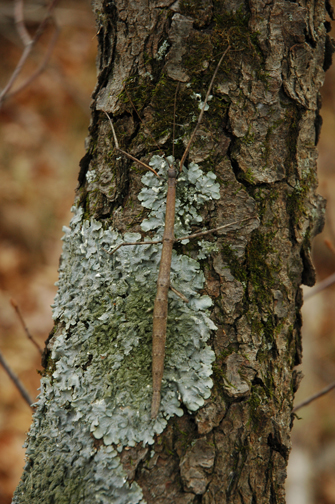 In the late 1800's and early 1900's so much soot and sulfur filled the air from factory exhausts that no lichens could survive in industrialized cities like Detroit. Then, you'd only find them in far-off woods where the air was clean. Now, the lichens on the previous page, from the Blue Ridge mountains can also be seen the Detroit area (left). I think they are beautiful. 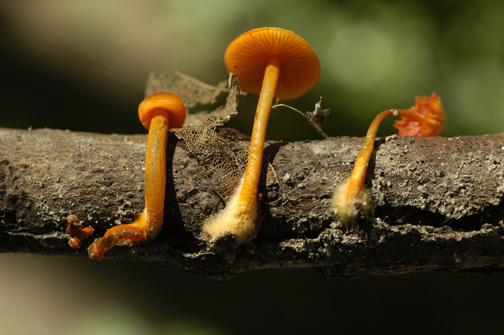 Don't confuse lichens and mushrooms. These tiny (1/2") mushrooms are the fruiting bodies of fungi that are destroying wood inside the tree. Sometimes they can form a dense mat which might look at first glance like lichen.

Download the pdf to read the complete issue illustrated here.

Our jade tree suffered because Steven and I didn't communicate clearly on a day before a freeze was predicted. I brought it in to the back room one evening before a frost, then asked Steve the next day, "Can you set the jade back outside? It's still nice out and that light's so much better for it." "Put it on the table out there?" Steven asked. I answered simply, "Yes."

Before dawn the next morning, I heard the radio report a lower current temperature than I'd expected. Not terribly concerned because a roof such as on our porch is great frost protection, I glanced out the back door to see if frost had formed outdoors. I saw no frost but was alarmed to see the table on our covered porch was empty! Steven had set the jade on the other table, on the open patio.

No frost had yet formed there yet the damage was done, by black frost. I know when it comes to tropical or subtropical plants and cold, the longer the exposure, the greater the harm. So I brought the jade in to our cool back room right away. The leaves looked fine for a day, then all of the outermost layer turned dark. 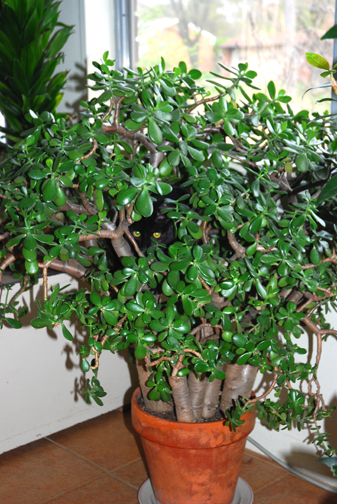 Our jade, a favorite hiding place for Olive the tree climbing cat, before the frost. 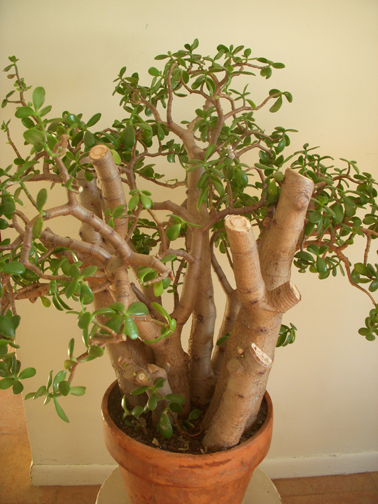 So we pruned the plant back hard. We've done this many times before, and often harder. However, we usually do that in spring when we can put it outdoors and out of mind while its new growth comes back fast and thick. Next time Olive the tree-climbing cat visits, she'll be miffed that her favorite hiding tree has become so open. 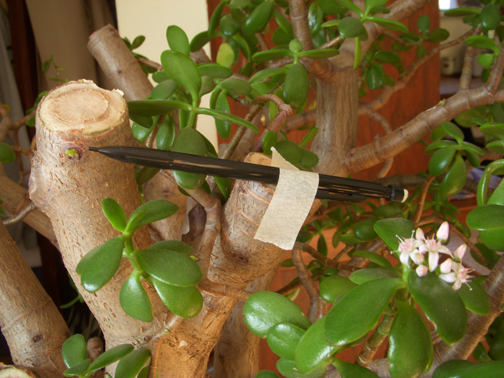 It's a trooper, this old jade. After just three weeks it's blooming in a sunny window and adding interest in another way -- pushing out new shoots.. Our pencil points to one of the new buds. (See the flowers? Too bad most of the branches were killed or they would all be blooming.)

A four-year update on this jade: It grew back wonderfully -- the cat was pleased. However, three years later we goofed again and fall frost nipped it once more. This time the damage was more extensive and we decided to divide it as well as cut it back. Then we had three jades, which all grew back. See that story in  Jade cold, cut back and Houseplants Spring Revival.

Download the pdf of What's Coming Up 71 to read the complete issue illustrated here.

"A year without its winter would seem all wrong to me... It is a necessity, not just a necessary evil." 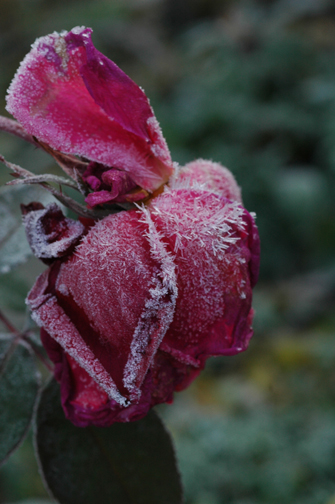 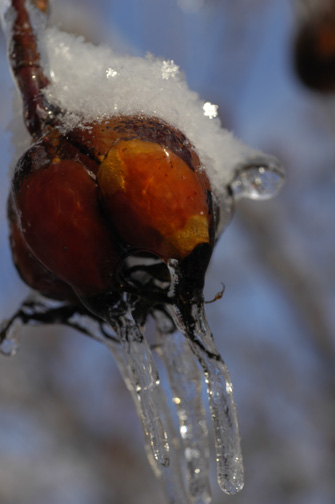 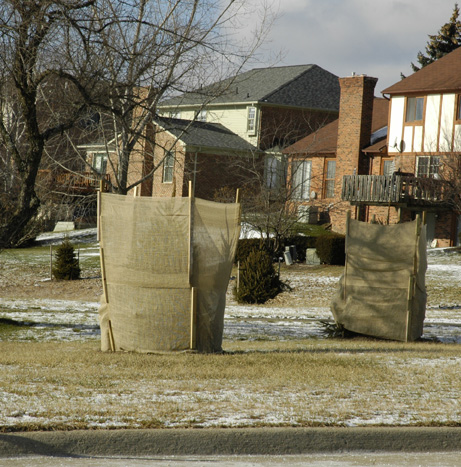 If you're tired of burlap screens, learn to create some of the beautiful Japanese forms of winter protection called "fuyu-jitaku." 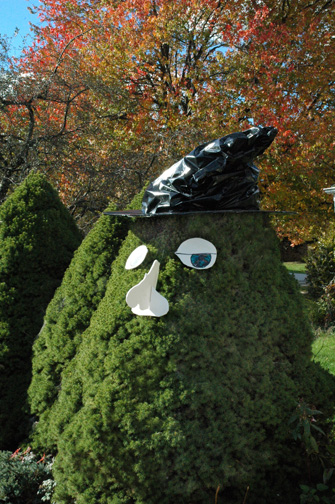 When we decorated my dwarf Alberta spruce for Halloween, wedidn't realize we were parodying Japanese winter "kasa." The hemlock branches placed in a Japanese maple (right) is like "Yabu-maki." 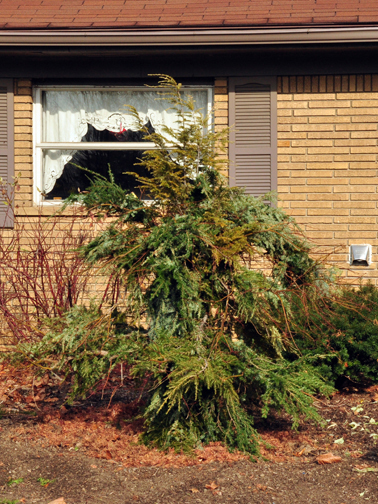 This issue Sponsored by: Dan Burns 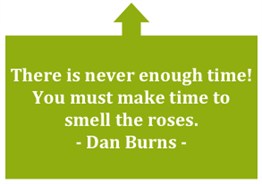