This page sponsored by:

Cut overgrown boxwood back,
then prune differently to keep them fuller

I have well established boxwoods along my front walk. They are 3 to 4 feet in diameter and 4 feet tall. I have kept them closely clipped at this size. If they grow any bigger, they will block the driveway.

I have had success pruning large leafed euonymus and golden privet down to about one foot. Will this work with the green box or will it be just way too ugly for an extended period of time?

If I take this approach should it be done in April or should I wait until May? - R. -

Boxwood can be stumped back to bare wood. If they were healthy and growing vigorously to begin with, their post-cut leafless wood will be full and green again by summer.

Below: This and other boxwood hedges' pruning are pictured in Spring cut, cut, cut: Boxwood pruning. 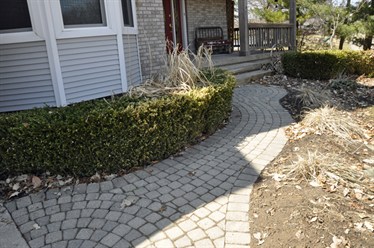 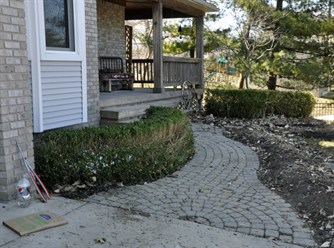 Cut them back to a year's growth smaller than the finished size you want. If you want them two feet tall and wide, cut them down to 15 or 18 inches so that they can keep all the new growth they produce in their comeback year. You'll simply snip the tips of the new growth in late summer

Don't wait until May when the shrubs are leafing out. Even a few days of rapid spring growth represents a big energy expenditure for a plant. To let that happen and then remove the new growth drains the plant's resources just when it will need every bit of fuel to rebound from stubs.

Such drastic pruning is probably best done in early April, except in windy, open places. There, wait a week or two until the weather is more unsettled. Sudden temperature changes common in open areas can cause newly-exposed interior branches on a stumped-back plant to die back beyond the cuts.

After the hard cut, changed routine

When you resume shearing, modify your routine. It will net you fuller shrubs less likely to ever again need such a hard cut.

Shear each April to remove however many inches of growth the branch tips produce in an average year. Then go over the shrub to locate the thickest knuckles -- the oldest branch ends that have become knots of thin twigs with less leaf than wood. With hand pruners, reach into the interior of the shrub by 6 to 8 inches and cut out the knuckle. Remove one of every five or six knuckles annually and there will always be fresh growth coming from the interior.

Don't worry that there are holes in the hedge outline when you do the second step. Do this in April every year and any openings left will fill quickly with growth from formerly shaded adjacent side branches and dormant buds.

"I sprayed my boxwood with Wiltpruf to keep them from drying out over winter. I hear I should spray them again, now. Is this true?" So asks P., echoing a question that's come up a lot recently.

It's true. Anti-desiccant on a broadleaf evergreen such as rhododendron, azalea, holly or boxwood, or at-risk late-planted items such as Japanese maple, can help the plant keep its leaves and branches moist through winter. If it works, those plants may not present us with scorched edges and dead twigs in spring.

However, sunlight, weather and time break down Wilt-pruf and other anti-desiccants. Often, the protection fails by the time the plant faces tits toughest times, during late winter's wide temperature swings. So on a day when it's above 40 degrees, give them another coating. Don't spray if it's colder, since the material won't adhere and set up below 40 degrees.

Some problems have no solution. Don't expect much help from us if you pose a "stumper" such as: How do I get rid of one type of animal that has become a nuisance, without adversely affecting any other animal, plant or person? Can't do it! Ecosystems are tangled webs. There's no extracting one piece without unsettling something else -- that rascally rabbit is part and parcel with all the songbirds.

to those who sounded the alarm, predicting that weeds would quickly build resistance to weed killers once the herbicide glyphosate (Roundup) could be used around growing crops. We genetically altered corn and soybeans to survive spraying with glyphosate, then began using that chemical to kill weeds among those crops during the growing season. In just 5 years, resistant horseweed appeared in at least 3 States. Now, the existence of glyphosate resistant ragweed has been confirmed. So don't throw away your hoes, we may be engineering our way back to them.

to liming beds under pines on the assumption you should counteract acidity from pine needles there. You can do more harm than good. Apply lime or sulfur only when that application's based on an accurate soil test. It's not unusual for soil to be very alkaline under even very old pines. You can buy a soil test box and instructions that will net you an excellent, inexpensive analysis, including a fertilizer, lime or sulfur recommendation. 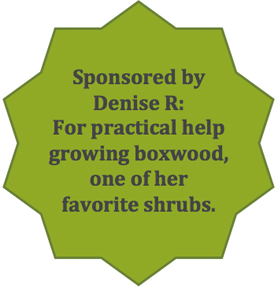