Up to showering houseplants, down to denying kids flower names 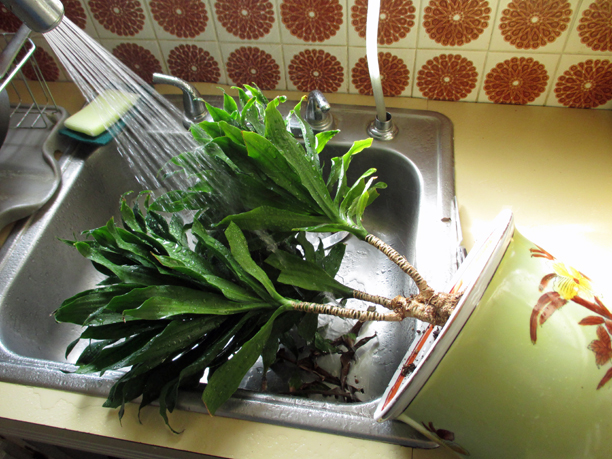 Dust on a leaf means less light gets through. Rinse it away!

We try to keep these kudos and raspberries short but this week they both got carried away. Read on for Thumbs up; click here to jump to Thumbs down.

Green thumbs up to a March houseplant cleaning

Shower your indoor plants,
resume fertilizing, and
repot if you like, or
clip them back.

In early March the angle of the sunlight changes rapidly. The light becomes significantly stronger and the days longer. Even houseplants get the cue to grow. Help them be all they can be by rinsing the grime that prevents the light from reaching the leaf. It blocks the sun just like dirt on a window blurs a view.

Put potted plants in the shower, tip them over the kitchen sink or hose them down outdoors on a nice day. If the dirt is grimy or you've had insect problems with the plant, prewash it: Cover the exposed soil with plastic wrap or aluminum foil. Spray the plant's foliage with oil soap in water (use Murphy's oil soap or a degreasing dishwashing detergent, one tablespoon of the soap in a quart of water). Coat upper and lower leaf surfaces. Let it sit for 15 minutes before rinsing. (More on soap for insect control: What's Coming Up 126, pages 1-5.

Since the plant will be growing vigorously, give it fertilizer. Fertilizer's not food -- the plant makes its own food from sun, air and water. (Sun + oxygen from water + carbon from air = carbohydrates.) Fertilizer is akin to vitamins, of use only to actively growing plants, providing essential elements to strengthen the new cells that are forming.

If the plant's become so big that it tips over, or uses the water in its pot so quickly that you can't keep up with watering, then you might repot now. Repotting just before a period of active growth is a good idea, so that new potting mixture under and around the root ball fills quickly with root.

Up-pot by only one pot size. Too much potting mix around the edges and bottom can mean soggy conditions for root tips. That's an invitation for root rot.

Remove the plant from its pot and cut off the whole bottom layer of roots. (Just like you'd slice the heel off a loaf of bread. Be brave, it's best for the plant.) Put some potting mix in the new pot, set the plant on top of it, fill around it with more potting mix, and water it to settle everything.

Repotting is not inevitable. You can keep just about any plant in the same pot forever. Depot the plant, prune the roots, add some fresh potting soil in the pot bottom, and reset the plant. You'll probably want to prune the top, too, if it's warranted this attention in the first place by becoming tippy.

If you want the plant to be fuller, or smaller, or you want some cuttings you can root and turn into more plants, now is the time to pinch to promote density or cut back to stimulate development of lower branches. The new sprouts that develop from a stumped-back geranium or coleus branch are prime candidates for rooting.

Remember to reduce the frequency of watering after cutting back hard. Continue to water thoroughly (link) when the plant's dry but expect to do that watering less often, for a while. That's because the amount of water a plant can use is directly related to how many leaves it has. (link) Once it leafs out fully again the pot will dry down more quickly and you'll go back to the old watering schedule. 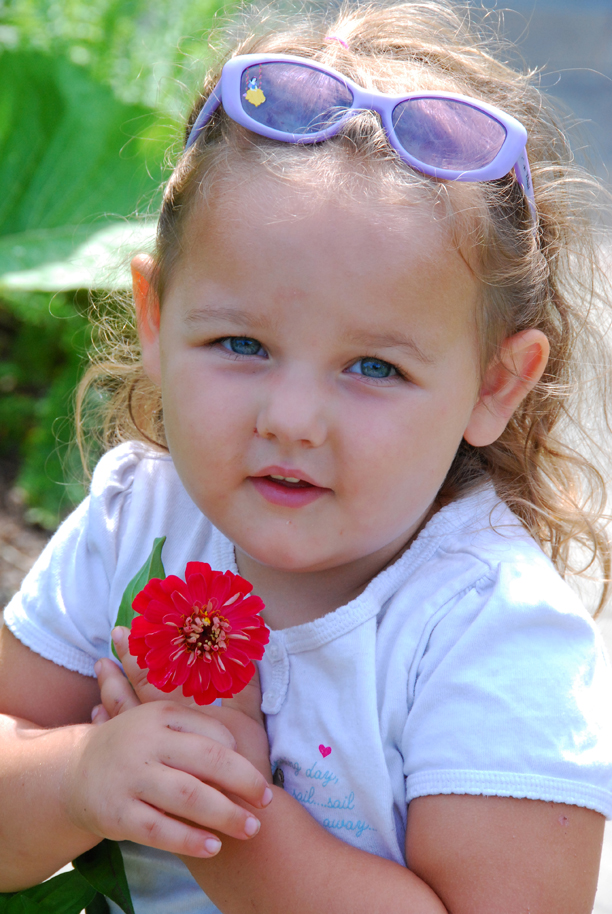 She can manage the word "zinnia..." perhaps better than we do! 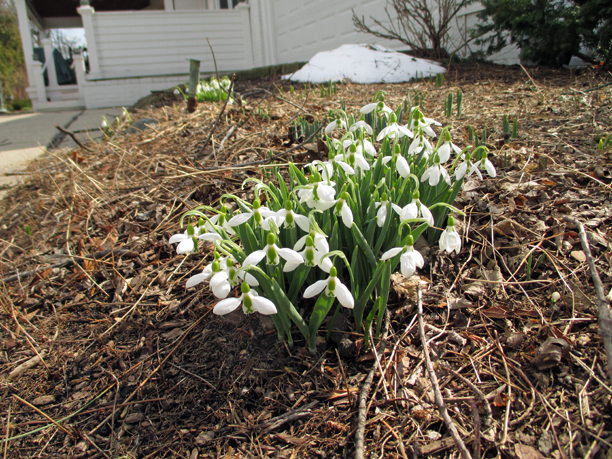 An even younger child can take you to this plant if you ask for it by name. When he starts to speak he may call it No-dop because he hasn't mastered those S's and consonant blends, but he knows it's snowdrops.

Youngsters learn faster than at any other time in life. A toddler can add dozens of words to her vocabulary every day. Even if she can't pronounce a word she's soaked it up for later use.

We know two year olds who know some plants in their yard by common as well as scientific name, and can take you to the correct plant even if you use several different common names. They had no more trouble with the concept of multiple names for plants than with the idea that "Momma" is also "Honey", "Mrs. Burton" and "Diana" depending on the speaker.

The more words a child knows, the better they do in school. Some studies are indicating there's even a correlation between preschool vocabulary and career success as an adult.

So don't deny these mental sponges their golden opportunity to beat us at our game. Avoid referring to everything as a "pretty flower." Of course we don't know every plant's name. No one does! However, if you know a plant's name, use it.

Tell your young apprentice, "That's a pansy." Say, "Some people call it a violet or a viola." If you know its old use as a mood-mellowing tea, spin them that tale and add the name heartsease.

Tell a dragon-loving, sword-wearing young wizard that "I call it yarrow but it was woundwort back when. A famous warrior used it as medicine when people were shot with arrows."

Or relate family lore to your child or grandchild, "My own mother grew this tickseed so I do, too. Now I know people like to call it coreopsis but I still like my mom's name for it."

Who knows? If we keep a powerhouse learner operating at full speed nearby, some of those brainwaves may spill over on us and we'll grow a little, too!