I read what you wrote a few weeks ago about rabbits during the winter stripping the layer of bark from the trunks of bushes. What you suggested was cutting back to below the eaten bark but I need greater clarification before doing that.

The bushes are surrounding our deck, are at least 20 years old and about eight feet tall. It looks like the rabbits only took the outside layer. All the gray bark is gone and it is white for about eight inches around the main trunk. Below that it is only about 20 inches to the ground.

That would be such a major cut back, would we risk killing the shrubs? Is there something else we can do for the wounds without cutting back? - J.V. - 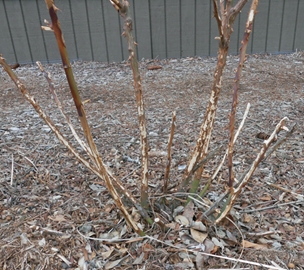 Rabbit damage to a shrub.

It my seem like "only the bark" but it's death to a woody limb once the bark is peeled away.

We would cut the shrubs back to a couple of inches from the ground and wait a few weeks before shopping for new plants. Sometimes well established shrubs and trees can produce five or six feet of new sucker growth in a year -- more coverage than you might get from new plants.

However, if the tops of the shrubs have already leafed out -- however thinly -- you may see no suckering or only very little growth if you cut the shrubs back now. That would be because the roots have given up all their stored energy in the first flush of growth but haven't received any or much energy in return. They may have nothing left to give and the plants will die. More on this exchange between the plant's top and bottom shortly.

The only alternative to cut back or replacement involves a skill which is not available for hire and it's a stretch to think you can learn in time to do it yourself.

To consider this alternative, you must first understand how wood functions. Think of in layers, like a human leg covered in a nylon stocking and then again in tough denim. The wood is the bare leg. The nylon is a thin zone where new cells are made, called the cambium. The denim is the bark, a very efficient protective layer.

Water and nutrients flow through the wood from the roots to the leaves. It's a one-way street, however, going up. Anything coming down from leaves to roots must travel in the nylon -- the cambium.

Although new bark cells and wood cells are made in the cambium the "stocking" itself never thickens. It's an ever-thin, vital layer.

The cambium is starchy since an important item it carries down to the roots is starch, which plant cells rely on for energy. The leaves can make starch through photosynthesis. The roots can't make it and so depend on the leaves via that cambium conduit.

When rabbits and other hungry animals strip the bark they're really out to eat the starch-rich cambium. The cambium may linger if the bark is peeled away in a simple scraping by car or deer antler, or when the attacking animal is a well fed but bored squirrel. Left exposed, the cambium dies over time. It needs the protection of bark to bear cold, heat, drought, and to thwart attack by fungus or insects.

If the cambium is interrupted clear around a limb or cut in enough places that it separates like a nylon with many runs and holes, the roots are cut off from the leaves. They use up much or all of their stored energy to send water up to the leaves to begin the season, then wait for the leaves to reciprocate by sending food. Cut off from that food, the roots die of starvation.

Then the leaves die, too, as water can't be taken up by dead roots. Many people who didn't notice stripped bark are shocked by plants dying suddenly during summer.

A technique called bridge grafting takes twigs from the undamaged part of the plant and slips their carefully cut ends under the bark above and below the damage, twigs' cambium pressed firmly to trunk cambium. If the grafts "take" then starch is permanently rerouted across the damage through the twigs, which grow in diameter.

We've read about bridge-grafting in textbooks, have heard of it used to save priceless plants at botanical gardens, and tried it twice. We have our fingers crossed that our most current attempt at it will save Janet's sister's squirrel-damaged Japanese maple, but we don't know anyone who hires out to do grafting in the landscape.

If you work quickly you might try it -- it must be done during early spring. Now that you know the term, you can call up a diagram on the internet or read from a tree care textbook to try it yourself.

If you find a tree surgeon with the necessary skills you may find the cost is high for such a specialized skill with uncertain outcome. Replacing the shrubs may be inexpensive in comparison.

If you seek a pleasing plant, look around you.

There are excellent garden centers everywhere. Go there first when you're looking for particular plants. Write down the scientific names of the plants you want, then use the phone book or the internet. Show your list to the garden center staff or spell it out to them over the phone. Don't start at department stores that sell but don't specialize in garden plants.

to those who regard every new planting as a proposal to the plant. They pick what seems the best place but check back regularly to see what the plant "says." If it's not thriving, they change their care or move the plant.

to frustrated but silent shoppers. Great garden centers become great because the owners and growers are responsive to requests. Ask for what you're seeking. Even if the answer is "sorry," that plant is likely to be considered in future stocking decisions.