What will do well in the general vicinity of a black walnut? - B.L. -

The roots of black walnut (Juglans nigra) produce the chemical juglone, which suppresses the growth of other plants. It even kills some species that are very sensitive to this chemical. Juglone can also leach into the soil from decaying leaves, bark, roots and fruit.

This toxic effect is called allelopathy. Other plants are allelopathic -- quack grass, mums, California pepper tree, and some yarrows -- but black walnut may be toughest to deal with because it has such strong, wide-reaching effects.

We call the problem black walnut wilt. Many gardeners have learned the hard way that tomatoes, potatoes, rhododendrons, azaleas, Pieris, mountain ash, lilac, burning bush, white pine, potentilla and blueberry are among the most susceptible. The first effect may be a general stunting, as the walnut's roots reach the sensitive plant. It may gradually or very quickly advance to the point of sudden wilt and death.

Like you, we tired of seeing the list of what dies near black walnuts, so started searching for the opposite lists. Based on our own experience and a West Virginia University inventory of species that occur naturally under black walnuts, here are some plants that should thrive. 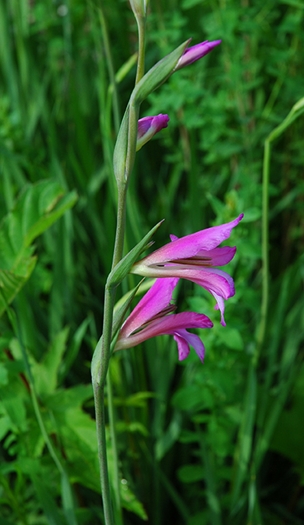 The hybrid gladiolas grown for cut flowers are well known even if not commonly grown in the home garden. This half-size cousin, Gladiolus byzantinus, is less well known all around but deserves more attention. Blooms pink or magenta in May in zone 5 (some sources say it is only hardy to zone 6; several 20-year patches in our own and clients' zone 5 gardens beg to differ). With its limited color range, it never presents the color-shifting problem addressed in this issue.

In our original article we shared two links, but even university Extension publications slip out of publication sometimes and that's what's happened to two we found quite valuable regarding black walnut allelopathy, one from West Virginia University (Bulletin 347 Occurrence of Plants Under Black Walnut) and one from Illinois' Morton Arboretum (tree-plant-advice/article/887/plants-tolerant-of-black-walnut-toxicity).

The good news is that the Morton Arb didn't let the information slip away from us. What they did there is to put the information about walnut tolerance into individual plants' descriptions.  (As at right.) Looking through the Morton's plants pages nets us this list of species resistant to or tolerant of black walnuts nearby adding juglone to the soil: 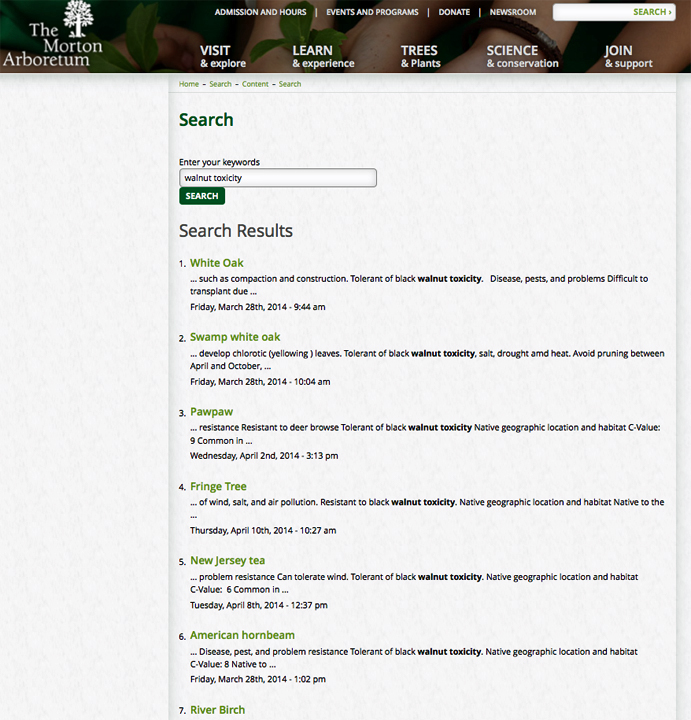 Probably the Morton staff has this in common with us: They are adding to their website all the time. So if you go to the site, Search walnut toxicity and get the most recent list.

If you go to the site use the link below (or if it stops working, go to the Morton and type walnut toxicity into their Search field):
http://www.mortonarb.org/search/node/walnut toxicity?

West Virginia University's bulletin was unique. The researchers did a survey of several hundred black walnut trees, recording everything growing within the each tree's root zone. That meant the list had specific perennials and grasses as well as woody companions. Better, they compiled the data as a list with percent of the time a given species ocurred under a black walnut. Thus by looking at other sources' woody plant lists we can see there are exceptions to every rule but also be able to play it safe by choosing plants that occur with black walnuts most often (every 4th or 5th tree or mroe frequently, reported as 20% of the time), rather than species that were under only 5% or 10% of the trees.

In the group gleaned from West Virginia University's findings are these perennials/groundcovers that have worked well for us, too, under black walnuts:

We'd love to take our paper copy of West Virginia's bulletin and put the information here. Sponsor us and mention this topic in your pledge if you want that addition!

About 30 years ago, my sister-in-law gave me a cutting of her hoya plant. It has grown to an enormous size, is beautiful, but has never bloomed. The plant the cutting came from bloomed. A few years back, that sister-in-law moved to Florida and took a cutting of my plant with her. That cutting-grown plant bloomed. Why doesn't mine bloom? - M.B. -

Based on its age, your plant is probably Hoya carnosa, called wax vine or honey plant. The other popular houseplant hoya, Hoya bella, lives for only about five years. Hoyas are in the milkweed family - when you finally see their waxy, cream colored flowers in hemispherical clusters, you'll recognize the connection.

At Michigan State University recently, we were lucky enough to catch up to Gregory Goff, MSU's Plantscaping Technician. We admired one of his hoyas, in bloom, while we discussed your question.

Goff feels that if it's healthy, large and growing strongly, any hoya will bloom. In warmer climates, it might bloom off and on all summer, but seems to blooms in winter for us in Michigan.

So take a critical look at the growing conditions and size of your plant versus your sister-in-law's. Maybe yours has too little sun. Like Michigan's native outdoor milkweeds, Hoya species need direct sun - about 4 hours a day - to bloom, but they appreciate midday shade.

Perhaps you're pruning too much. Even in the sun, hoya vines won't bloom on stems less than three feet long. Once a branch blooms, if you deadhead it, remove flowers but leave the flower stalk (peduncle), because the next crop of flowers will form from growth that originates there.

What kind and how much fertilizer do your each give your plant? Over-fertilizing can cause hoya, and many other plants, to grow lush foliage at the expense of flowers.

Goff gave us a tour through his extensive, labeled collection of interior plants in the MSU teaching greenhouses. A great learning experience, and one you can have, too, at the annual MSU Horticulture Club Spring Shows. They are free and include seminars, demonstrations, informational displays, a plant sale, and lush plant displays within the huge greenhouse Watch the club's website for the current information.  http://www.msuhortclub.com/

I planted and grew some gladiolas two years ago, a mix of colors. They bloomed nicely and so I dug them at the end of the year, saved the bulbs over winter, And replanted in spring. They bloomed that second year, but all of them had turned to yellow - no more mixed colors! The same thing happened to my neighbor. What's going on? - B.G. -

This stumped a lot of people I talked to, but not Sam Fisher, the Executive Secretary of the All-America Gladiolus Selections Committee. Sam advises us that gladiolas can change color, but this happens only about 1% of the time. More likely, fusarium disease is to blame.

This fungus disease often kills gladiolas while in storage. Some of yours may have developed it during their first year and though the corms looked okay when dug, they died during storage or in the second season before they could bloom. They may even have been infected when you got them, but it took more than a year for the disease to run its course. Since lighter color gladiolas - white and yellow - are usually more resistant to fusarium than the others, it would make sense that you'd end up with a lot of yellow and not many other colors.

The answer, according to Sam, is to start with healthy bulbs. The best source is a nursery that specializes in gladiolas. Such specialists use preventives on corms going into storage, such as a 30 minute soaking in hot water with 5% alcohol, or a solution of the fungicide Benlate.

Fusarium can live over a winter in the soil, so don't plant gladiolas into the same place where you grew the ill-fated batch.

Special thanks to Sam Fisher with the All-America Gladiolus Selections Committee, who was a great help on this puzzle. In a note of thanks we sent to Fisher, we told him we, "included the notes about hot water dip and Benlate based on Pirone'sDiseases and Pests of Ornamental Plants, once you'd pointed us in the direction of fusarium. ...people here may not try it themselves, but certainly readers say they love this kind of additional information..." 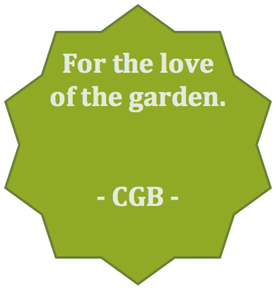 Click to read more of our Sponsor-recommended pages.
Please help us help others grow. Sponsor us!
It's easy and inexpensive.