We have heard that we must not disturb hellebores (Helleborus species, from Christmas rose and stinking rose to lenten rose) but our experience has not supported this rumor. These are long-lived plants that can remain in place for many years without requiring division but they can also be dug, divided, moved, rearranged just like any other perennial. 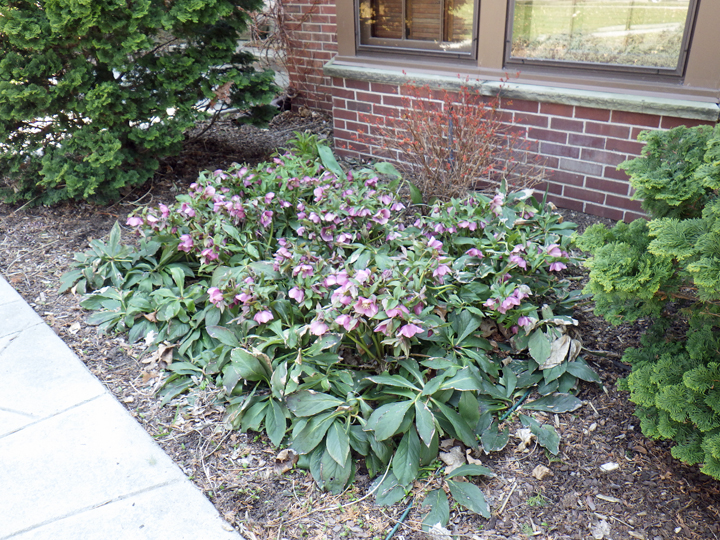 Hellebores are lovely, 4-season perennials. You can divide the plants in any one of those seasons. 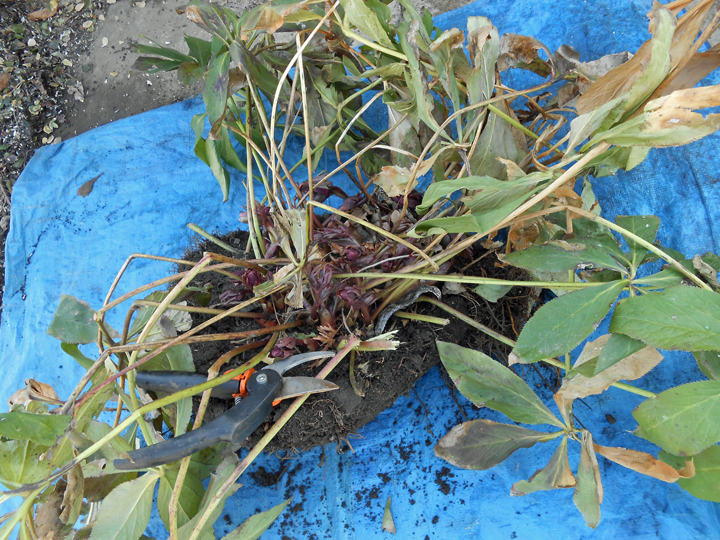 Lift the clump when it suits you. We've lifted this one in early spring just as the flowering stalks begin to rise.

Slice down around the clump, then insert your spade to its full depth, lean back on the handle and pop up the clump.

Cut away foliage and stems that are in your way. 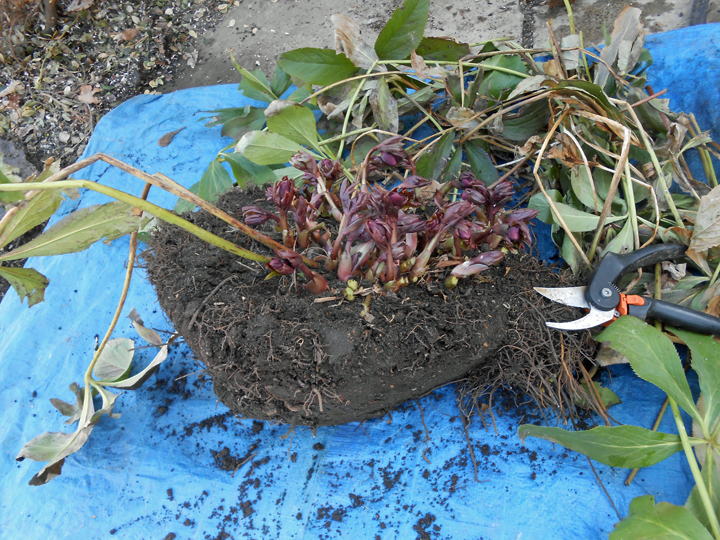 Remove foliage and stems that are in the way.

Use a knife or root saw to slice through the dense crown between eyes. Cut with a sharp spade if you prefer -- it's quicker, but less precise. Every piece that has roots and at least one eye can be replanted. 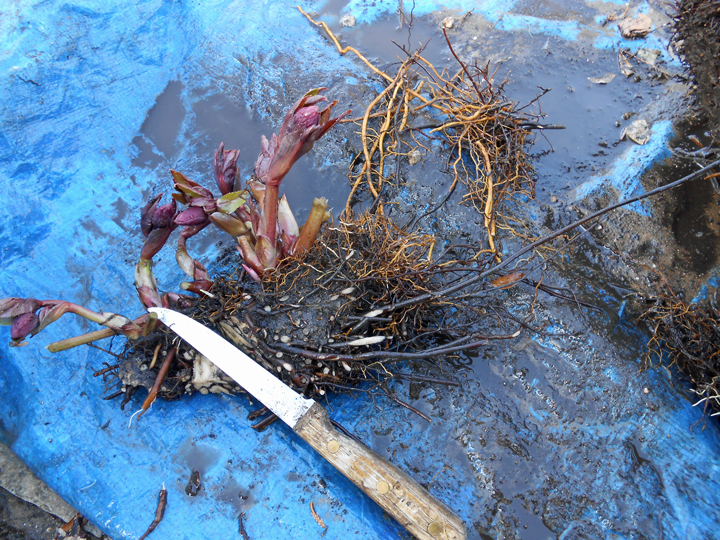 With a sharp blade, slice through the thick crown between eyes. 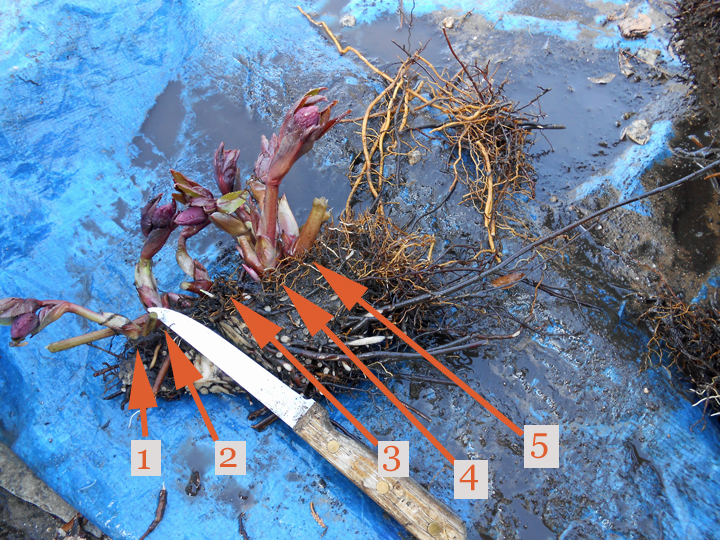 There are five eyes evident in this division, each giving rise to one or more flowering stalks. 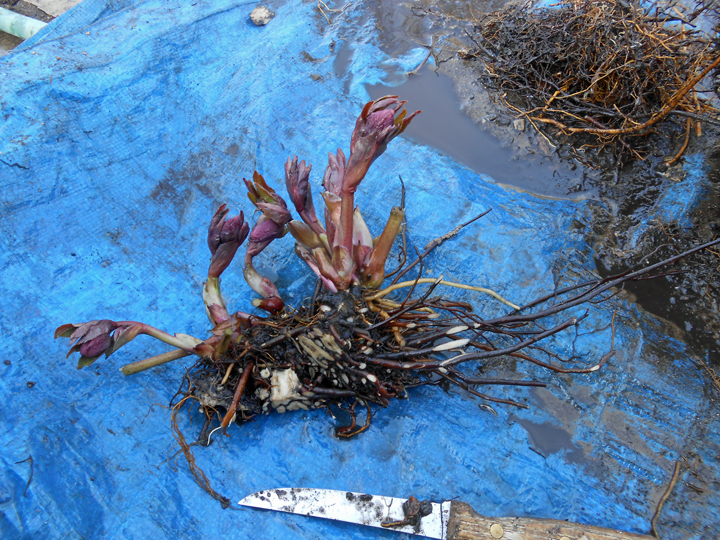 We can divide further if we need more plants. This could be two relatively equal divisions is we cut between eyes 3 and 4. 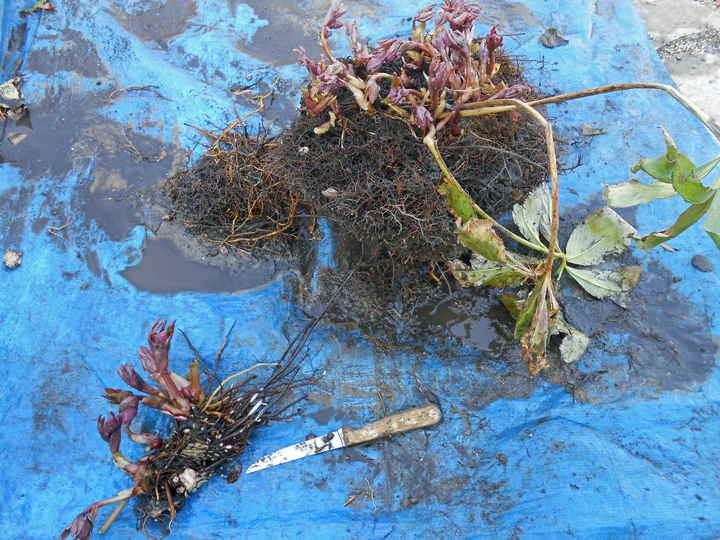 One mature clump of lenten rose can be divided to make a dozen or more good-sized divisions.

Make as many divisions as you need. If you are dividing primarily to keep the plant young and growing vigorously, you may want to do as we do, which is to make at least four pieces from each clump so anything we replant is 25% or less of what we lifted. To divide into half or even into thirds is a wasted effort because what you replant is still full of deadlocked growing points. Divisions with more edge grow better and retain health advantages longer.

Perhaps the best time to dig and divide hellebores is in June after their show is over. (They bloom for several weeks in late winter or early spring but the stems remain upright and the showy bracts behind each flower are attractive for weeks longer as they gradually fade to green). Post-bloom divisions have plenty of time to settle in, form flower buds for next year and develop enough root to avoid drying out over winter.

However, "best time" doesn't mean "only time." Often, we'd rather not do a big dig in June when surrounding perennials are simultaneously in their glory and impediments to working in the bed. We may mean to do the project in June but then see the opportunity slip away as graduation- and wedding parties claim our time. In addition, we may at that point be unable to accomplish our objective if it was to make more of the best varieties because in the months since their bloom we lost track of which was which.

So we divide hellebores when we can and when we need to. We've dug them in fall, in mid-summer, occasionally in early winter, and many times in early spring. Our experience has not given us any reason to think these plants are temperamental in any way, and we have not noticed any moping associated with one season or another.

Early spring is our preferred hellebore move time. If we know which is which or that doesn't matter, we lift the clump before flower stalks rise and new leaves form. If we will need to sort the plants at digging time and we don't know which is which, we wait until flowering starts. Then, we work as carefully as we can to avoid snapping flower stalks. That said, we don't fret over any breakage. We've seen that even if we have to cut all the foliage and flowering stalks off of a transplant , even in mid-summer, the plant will start over with new foliage.

We've heard people say, "Oh, not now, you wouldn't want to miss any of this bloom!" However, if we need white hellebore divisions, bloom time is when we are most sure which plant to dig. Left, with last year's leaves in place. Right, with old foliage cut away. Either way, we really don't lose out if we erase that white blooming clump from the composition.

Hellebores are susceptible to infections of the crown when the leaf- or flower stalk develops an infection and that infection moves into the crown. Foliage damaged by cold or by foot traffic is a likely opening for infection.

Arrows mark the base of a leaf stalk that rotted, and where that infection passed into the crown. Throw away this part of the crown. Or if you must conserve every piece of a special hellebore, pare away the bad tissue and then rinse the remainder with peroxide or a bleach solution before replanting.

If you see rotted tissue in the crown when you divide, discard that portion of the crown or cut out the diseased bits just as a chef would pare away bad spots from a potato. After cutting out bad parts, rinse the remainder with hydrogen peroxide or a dilute bleach solution (1 part bleach, 9 parts water).

One way to keep a hellebore from rotting is to routinely remove damaged leaves throughout the year, and to cut away all old leaves in fall or early spring. If you remove the leaves in fall it can be a good idea to put an airy mulch over the crown since the leaves are no longer there to protect the flower buds.