I've read conflicting advice as to just when to apply grub killer (such as Diazinon granules) for this area.

Just what date, and how often, should this grub control item be applied? 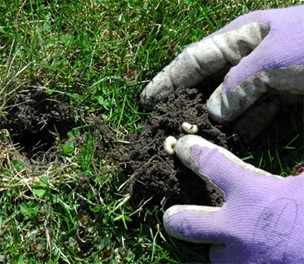 A lawn can live with some grubs, especially if the gardener keeps the grass well watered. Wouldn't you rather water than buy and apply a pesticide?

The best time is in late July or the first of August, so the grub killer is there for the early stages of development of the various lawn-damaging grub species. The younger the insect, the easier it is to kill and the less damage it can do before your treatment ends its feeding.

Diazinon has been widely used but Merit, more recently developed, is currently in favor since it works at lower concentrations. Mach2, which can't be purchased at a retail level but pest control companies can apply for you, affects only beetle grubs so it's a better choice for those trying to avoid unwanted side effects such as reduced worm activity that can mean hardened soil  and weakened lawn roots. The active ingredient, such as Merit (imidacloprid) or Diazinon, is listed on the grub killer's label.

One well-timed application should suffice. If you're a greenskeeper who knows precisely which beetle is doing the most damage, you might alter the application time for what you know of that species and its development in that year. If you're dealing with an enormous problem and missed the July-August application, you must probably treat the lawn in spring. However,  your choice of product is more limited then since Merit and Mach2 are not effective on older, springtime, grubs.

Regardless of timing and type of killer, water it in so it reaches the grubs. Keep a sprinkler running after your application until a collection can or rain gauge placed there catches an inch of water. If your soil is hard packed, apply the water slowly or in several closely spaced episodes so it can soak in rather than run off. An inch of water will push the grub killer down through 3 or 4 inches of soil, good placement for most grub activity.

Water. So many of us in this business wish those concerned about their lawns would jump to the conclusion "water" before thinking "grubs." We happen to be writing this on a summer day while also tending sprinklers.  We crossed paths with a fellow landscaper and commiserated over how dry the soil is and how hard it's been to keep things watered this summer.

We mentioned grubs as our writing topic of the day. "Grubs!" said our friend. "I wonder about people who look at their lawns every August and figure they have grubs. They might just need to water better. Kick the sod, and if it rolls up like a carpet, that's a grub problem. Otherwise, water's probably the answer."

We discussed a case we'd collaborated on, at a condominium association where each morning the gardener had calls to come put sod back in place. Raccoons were peeling the sod back to extract grubs. The problem was not grubs, however. It was the hard packed soil. The seven year old sod had yet to root into the soil -- it was surviving on water and liquid fertilizer as if spread out on pavement waiting to be purchased at the garden center. Core aeration was the answer.

Grubs eat roots and that kills the lawn. The damage is at its worst by late spring when grubs are oldest, before they emerge as beetles. The grass dies or limps along on severely damaged roots until the hot, dry weather comes, then gives up the ghost. If an August-brown lawn still has enough root to anchor it against a kick, you don't have enough grub activity to warrant grub killer.

Studies show that a well watered lawn can sustain three or four times as many grubs as one that's not irrigated, and is healthier in many other ways. Greenskeepers respect these reports, so why don't we?

Water for lots of problems

It's dry! Brown lawns, mildewed Pulmonaria, non-blooming Astilbe, scorched ferns, faded Astrantia and flattened Anemone need water, not pesticide. It takes a great deal of irrigation to make up for lack of rain, so even if your sprinklers have been on regularly, your plants may be parched. Poke your fingers an inch or two into the soil, below the mulch or the lawn and see if it's warm there -- that means it's dry. Time to drag out the hoses.

The year of the bellflower

That's the title F.K. proposes for the year. "My peach leaf bellflowers (Campanula persicifolia) have never stopped blooming and are standing up tall. The clustered bellflowers (C. glomerata) are blooming down their stems and preparing to start all over again. The carpet bellflowers (C. carpatica'Blue Clips' and 'White Clips') have bigger blossoms than usual. Bellflowers are not exotic but they sure are neat!"

Paul Emanuelsen, a zoo Adopt a Gardener who specializes in roses, reports black spot beginning to show up now. One of his floribunda roses  is looking so bad he may just cut it down and let it start over. Since it blooms just once a year in late spring he won't lose any flower by doing this now but may net a cleaner, neater look.

Overall rose health is as important in black spot control as spraying. That means keep up with watering and fertilizer. Emanuelsen's just applying his last Rose-Tone fertilizer for the year.

to putting a bucket under that leaky hose connection, if you can't fix it yet. Use what you catch to hand water where sprays don't reach.

to hose wrestling. How do hoses always manage to kink and stiffen in ways that defy even the best hose reel and most agile gardener?

Is it really grub trouble