Avoid the Temptation to Kiss Me Over the Garden Gate
Sexing a holly, berry easy at bloom time
Orchids worth the care, fertilizr right there
Salt-wise to save plants
Look now to prune better

This issue was Sponsored by:

I have admired a plant called Kiss Me Over the Garden Gate. How can I find it to grow it? - A.T. - 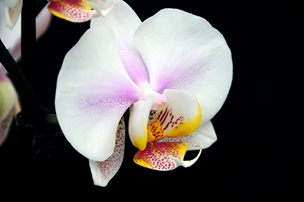 Sure it's winter, but fertilizer is still needed if we keep plants growing (who wouldn't do a bit extra in the way of light for a beauty such as an orchid!).

That's one of the common names for "Polygonum orientale", a 5-7 foot annual with dangling clusters of beady pink flowers.

Use a common name index, sometimes called a popular name index, to trace a common name to its botanical or scientific equivalent. These cross references are in plant encyclopedias and also at your fingertips via Internet Search. The technical terms may be tougher to pronounce but a scientific name is far more useful for locating plant information than a common name.

Many plant encyclopedias have common name indices. There are so many cultivated plants, each with multiple common names, that no single index can include them all. So don't give up if at first you can't find a name. In this case, your plant is in Hortus Third and the RHS Dictionary of Horticulture, but not in the AHS Gardener's Encyclopedia.

Using the botanical name, read about that plant in the encyclopedia or see a photo to confirm it's what you want.

That's one problem for gardeners who consult the Internet. "Just a minute more" can turn into an all night exploration. A search for "Polygonum orientale," for instance, yielded not only the source listed above but an entry in the USDA plant database (http://plants.usda.gov/) and a medicinal herb website under another common name, Shui Hong.

Interested in its appearance on the USDA site, I found it's a noxious weed in Tennessee, occupying both wetlands and drier soils. That's one of the tests of weediness, whether a species can naturalize in all moisture gradients.

Wondering if it's also a problem in Michigan I checked the USDA plant maps for its occurrence in the wild here -- something also possible in Michigan Flora Part II (Edward Voss, Cranbrook Institute of Science Press). It's naturalized in at least 11 Michigan counties including Wayne, Oakland, and Washtenaw. Considering this finding along with the notation "birds like the seeds" from a catalog entry, I realized that this plant's seeds are likely to travel beyond the property line despite a gardener's efforts. Since I don't want to contribute to the weed problem in our diminishing natural areas, my choice would be to pass on this plant.

I'm sending you a leaf from my holly. Can you tell me how to know if it's a male or female? I'd like to have berries and read in your column that I need two plants, but I don't know which this is. - L.D. -

Checking the flowers is the only sure way to tell the sex of a plant whose species produces male and female flowers on separate individuals.

Look at several of the blooms on your shrub this spring. Holly flowers are very small, so you'll probably need a hand lens. Look when you first notice the flowers and over the next two days, to be sure you catch them when they are ripe.

If you see yellow dusty pollen, the flowers are male. If you don't see any pollen but a green orb is prominent at the blossom's center, it's a female.

There are sometimes other differences between male and female plants, but recognizing them requires a comparison. For instance, 'Blue Prince' holly tends to be more upright in its branching and taller than 'Blue Princess' whose branches take a more horizontal turn. The female also grows more slowly than her male consort.

Water your plants when you clean that aquarium.

Eliminating an accumulation of nutrients in that water and preventing algae growth is your aim. Yet those same nutrients are an excellent source of non-burning fertilizer for houseplants. Thanks for reminding us of this, B.C.

Fertilize plants that are actively growing...

...blooming orchids included. The general rule is to withhold fertilizer in the winter. However, if a plant is receiving enough light to grow vigorously, keep on fertilizing. A water-soluble fertilizer mixed at half- or quarter strength every other watering is a safe bet for any plant.

Of course, every species has its natural preferences. As an example, bird and bat droppings are nutrient sources a wild orchid would utilize. You can buy guano  and mix it into an orchid's potting mix at repotting time. It will gradually break down and nourish your plant until the next time you divide or up-pot.

to knowing whether your street is salted. Plan to rinse plants well and soak beds along salted roadsides with several inches of water in early spring to remove salts before growth begins.

to downcast eyes in winter! Look up now when you can clearly see a tree or shrub's branching structure. It's easy to recognize and a good time to prune out crossing and rubbing branches.

Sponsored by an orchid loving reader: 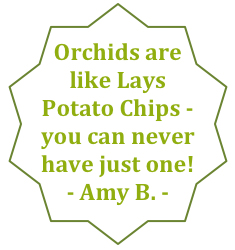 You, too, can help us keep the gardening community growing.
Sponsor us! It's quick and inexpensive.