We score a hit when readers report: I was afraid to cut my Japanese maple but after seeing you prune, then helping you do it in a hands on session and seeing pictures of other real trees that had been cut (and lived), it all finally added up to give me courage to prune.

This Japanese maple got its skirts lifted and crown reduced in a Garden By Janet & Steven session during a January thaw. Its gardener explained the need this way, "I already moved the walkway so it could have room. I don't want to move the walk again so we'd better prune it." 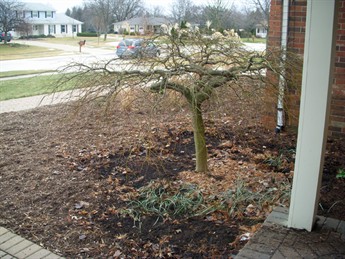 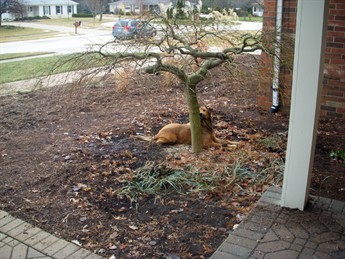 Here are before and after shots, above, with dog Maggie telling us ""Enough, stay away now!"

We aimed to shorten all the branches by two times the growth rate (branch extension rate). That will allow the tree to grow for a couple of years before reaching the edges of its allotted space once again. But first we evaluated the main branches and decides there was an extra one here. Arrow. It did nothing but cross over and through spaces the other three main limbs should have had all for their own.

We tied up the target limb's branches so we could step back, look at the string-marked wood and decide if we could live with what could be left after taking that trunk out.

In addition, the three we eventually designated as "keepers" describe graceful curves, like arms of a pinwheel. 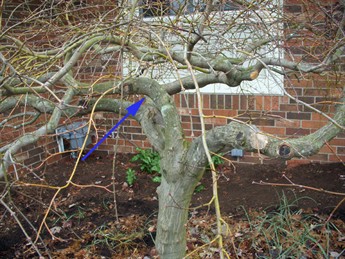 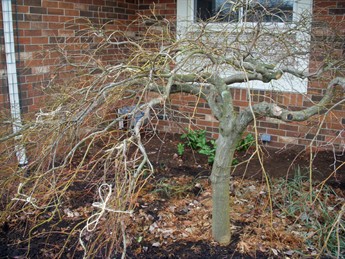 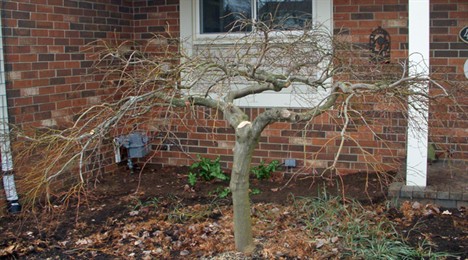 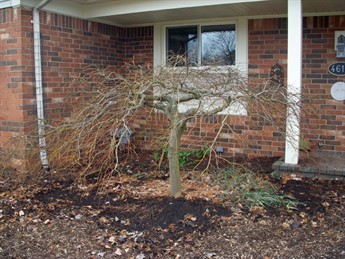 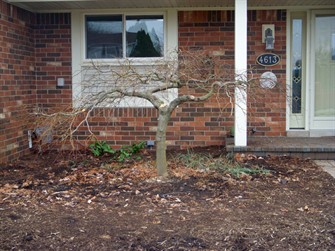 Before, and after. Is it smaller -- less wide? Yes. Is its structure graceful, visible, and able to be enjoyed? Yes. Did we cut off too much? No, only 1/3 the leaf buds went into yard waste bags.