Lora's photo and comments came to us by email (pre-Forum times!), along with the question, If they aren't Ents, what the heck are these?

We checked with Forum Moderator Dennis Groh (more to the point, he's a past president of the American Conifer Society) says they're weeping giant sequoias (Sequoiadendron giganteum 'Pendulum'), and that they are used extensively in landscaping in Oregon, too. Here's a link to information about those plants, from the web-catalog of one of the biggest plant producers in the country  (stay calm, home gardeners; it's a wholesale grower).

Seen one, seen others almost as striking

As long as we're driving around poking fun at others' front yard treasures... We've had people tell us that weeping Alaska falsecypresses (Chamaecyparis nootkatensis variety) look kind of Halloween-y ghostly, and a larch at the door reminds them of Lurch in an old TV show: 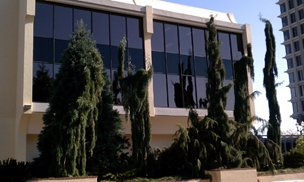 "How about these trees I saw a couple weeks ago in Palo Alto, CA? The conifers are indeed a break from the usual foundation plantings. And trees with a great deal of character. They remind me of the Ents* in Tolkien’s Lord of the Rings...” Photo ©2011 Lora Mazza 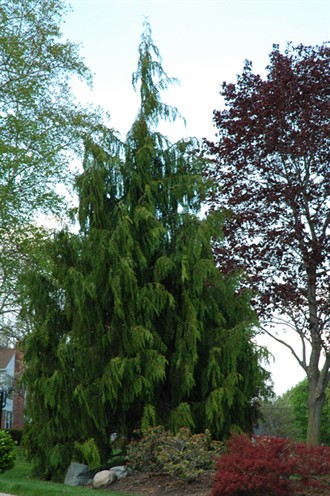 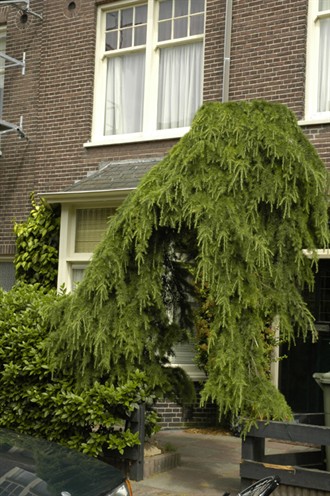 Maybe their oddness comes from being alone among "normals." In a company, as at a botanical garden conifer collection... 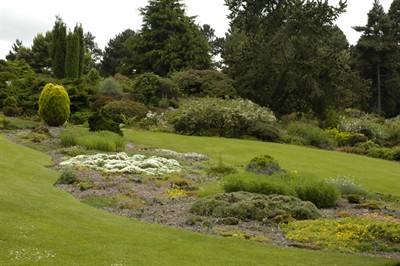 Royal Botanical Garden in Edinburgh, Scotland. One of our favorite gardens. That's an Alaska falsecypress back row center, looking quite normal among other plants in te conifer collection.

*Speaking of Ents, check out the Forum's candidate for Ent-hood.