Just a little off the top

Of borers and beatin' borers

Some of the 45mph garden sights we cover are eye poppers even to non-gardeners.

Our headliner this time is more subtle, displaying something even a gardener might miss. However, once you do take note of it, you will probably find that it's more the rule than the exception. We're talking about pyramidal evergreens such as fir and spruce that have lost and then recovered their tip.

This example is not one of dramatic loss. Rather, it's "the usual" for this kind of  borer damage  --  loss of the top couple of feet. That's where tip borers aim, true to their name. Sometimes, a tree can loses much more, enough to raise the cry you might say, "Look, at that! Someone cut the top 6 feet from that spruce rather than buy a Christmas tree?!"

That more drastic loss might happen to a tree whose tip survives the initial borer damage, continues to grow but ever after has a weak spot. Later, it may break at that point, especially if some secondary pest -- an opportunist --
moves in there where  the tree's defenses are down. 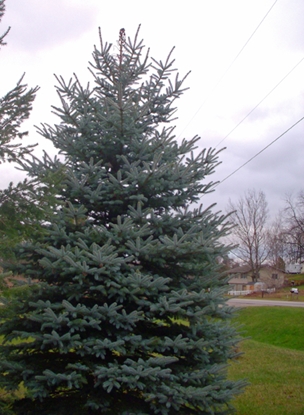 It won't jump out to just anyone. However, once you are aware of tip borers' relationship with pines and spruce, you will notice trees like this all over the place -- even 50 feet off that 45mph road.

Notice the signs that the companion spruce, too has had this problem. It has several times lost and redeveloped a tip from a side branch. The trunk isn't straight but has a crook at each place where a side branch took over.

This same trunk configuration will be apparent in M.M's tree, once a new leader develops in Fir lost its head. 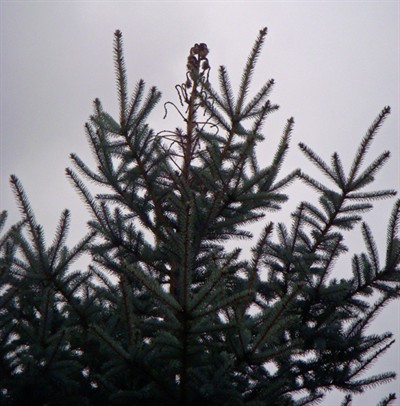 Here's a classic dead tip from borers tunneling into the vertical shoot while it was soft, and continuing down for a year. 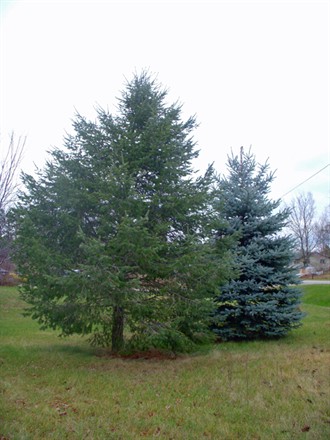 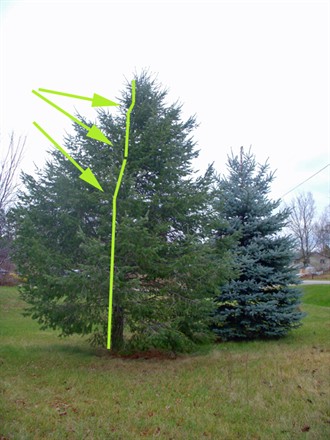 What to do to beat spruce- or pine tip borers?

On a young (short, manageable) tree, watch for wilting of the young leader. If you see it, cut it out during that growing season and burn it to destroy the borer within. Nip out competing side branches. When only a few inches is lost the development of a new leader is quick and leaves no lasting mark.

If borers are frequently a problem, check the tree's growing conditions -- a vigorously growing young tree should be able to deter that. Correct drought, compacted soil, shading conditions, etc. Treating the tree's tips early each spring at borer moth egg-laying time can break the cycle, although the cost to you, in an imposed extra chore, is stiff.

For some conifer contortions more certain to catch your eye, check this.