Please Sponsor us!
A few dollars grows a long way.

Enjoy a quote a day... or indulge all at once

Groundhog Day! A good time to reflect on the nature of gardening and also seek advice for the upcoming season. So we've expanded the Quotations library with these gems.

48 days until spring begins, 48 new quotes (with over 90 illustrations) to make you think, grin or just say "Ahhh." Click any saying here to see it illustrated in our Quotes collection.

We don't mean you should wish the wintertime away. There's a lot to be done before spring -- even if we discount the spring housecleaning that we want done and behind us so we can go out and stay out.

Come prune with us in a thaw, meet us for a winter conference, or reserve a date for hands-on learning at a Garden by Janet & Steven. Check our website calendar and please notice the three Secrets workshops beginning May 2.

Quotes about the gardener's nature:

More than anything, I must have flowers, always, always. - Claude Monet - 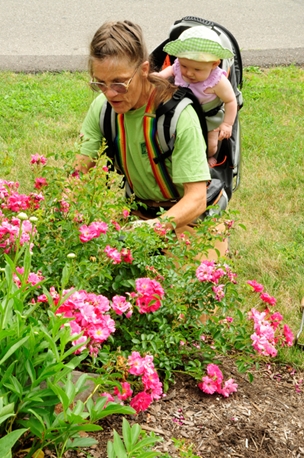 We've added 90 startling and beautiful photos for 48 thoughtful, humorous quotations and excerpts that may speed winter's end. Follow the links to view the illustrated quotes.

...the laying out of the spring bulb garden (was) a crucial operation, carefully charted and full of witchcraft. ...As the years went by and age overtook her, there was something comical yet touching in her bedraggled appearance... her studied absorption in the implausible notion that there would be yet another spring, oblivious to the ending of her own days, which she knew perfectly well was near at hand, sitting there with her detailed chart under those dark skies in the dying October, calmly planning the resurrection.

Quotes from the philosophy of gardening:

The trouble with the world is that the stupid are cocksure and the intelligent are full of doubt.

A garden is like those pernicious machineries which catch a man's coat-skirt or his hand, and draw in his arm, his leg, and his whole body to irresistible destruction.

February... Now more than ever one must remind oneself that it is wasteful folly to wish that time would pass, or -- as the puritanical old saying used to have it -- to kill time until it kills you.

Plants need to be moved around. You may have to move them a half dozen times before you get the position right (or before they give up the ghost) but that's nothing to be ashamed of.

Worth quoting about general garden care:

...better men than we go out and start their working lives
At grubbing weeds from gravel-paths with broken dinner-knives.

...there is nothing more exasperating than a hose that just isn't long enough.

...set the basketball on the kitchen table. Open a cupboard, get out a bottle of sesame seeds, and place a single seed beside the basketball. If you were to reduce the Earth to the size of a basketball, all the fresh surface water on the planet -- all those rivers and lakes and ponds and streams -- would fit inside that one tiny sesame seed. Add a second sesame seed; now you have all the usable underground water as well. Is fresh water a scarce resource?

From a market garden, one would send the cart to town with produce and it would come back loaded with manure and night soil. This was an important exchange for both a garden in need of fertilizer and a town where a large number of horses and other livestock were housed.

A digging fork is a stout, short-handled tool with four flat tines about a foot long.... for weeding I use it delicately to nudge the soil loose from roots without breaking them...

Some tools are ancient, some surprisingly modern. In museums we see Roman spades of heavy iron and wooden, iron-edged medieval spades along with many forks and hoes. Yet the one-wheeled barrow was not around until the 1300's and the trowel not for another 300 years.

A word on pruning:

He carries a knife, curved like a crane's bill and sharpened to a deadly edge, and this he whips out to prune a dwarf fruit tree in minutes. "Mind you, don't leave a stump; cut your branch right to the bone."

Quotes from the front, fending off bugs and animals:

It's best to smoosh pine sawflies with rubber gloves.
Their guts eventually soak through cloth. Eww.

Although Helix aspera, the common or garden snail, was an accidental import, its ravages led to the introduction of that enthusiastic consumer of slugs and snails -- the hedgehog.

- from A History of Gardening in New Zealand by Bee Dawson -

'What sort of insects do you rejoice in, where you come from?' the gnat inquired.
'I don't rejoice in insects at all,' Alice explained.

- Lewis Carroll, Through the Looking-glass -

The families of rabbits or woodchucks will eat the salad greens just before they are ready to be picked; I plot ways to kill these animals but can never bring myself to do it...

Passed along about storing plants:

The Emigrant's Friend recommended wrapping seeds in tinfoil (for the long voyage) and then putting them in a barrel which had been lined with moist sugar, with layers of sugar in between each lot of seeds. Others swore they got the best results when they placed their seeds in melted beeswax. Pulpy fruits, such as currants, gooseberries, mulberries and strawberries, were squashed between layers of cotton or blotting paper, carefully dried and then inserted in letters or parcels...

- from A History of Gardening in New Zealand by Bee Dawson -

We've learned over 25 years of interviewing other professional gardeners, especially in public gardens, that no one is ever 'all caught up.' Gardeners tell us, 'If only I had more time!' That's the case no matter how large a staff they have, how well tended their garden to begin with, or how full-time they are.   - Janet -

Even a flower gardener who chants "down with lawn" will stop and smile at that scent of new mown hay.

Green is the colour of life.
- Christopher Lloyd -

Sure, as garden makers we rip up lots of sod. But as designers we know nothing else sets off a bed so beautifully as a surrounding of lush lawn. - Janet -

...the possession of a quantity of plants, however good the plants may be themselves and however ample their number, does not make a garden; it only makes a collection. Having got the plants, the great thing is to use them with careful selection and definite intention.

It is a golden maxim to cultivate the garden for the nose, and the eyes will take care of themselves.

I have pinched cuttings to which I had no right myself, and I can remember most such occasions with more glee than shame.

The first gathering of salads, radishes and herbs made me feel like a mother about her baby -- how could anything so beautiful be mine?

The farmers loved her bees, thanks to all the pollinating they did, how they made the watermelons redder and the cucumbers bigger.

I want death to find me planting my cabbages.
- Michel de Montaigne -

On either side of the front walk there towered two
old horse-chestnut trees. I loved their sticky,
unfurling leaves, and when they bore their candles
it was magic, breath-catching, eye-delighting. Cut
down, cut down. What kind of man cuts down trees
that took all those years to grow? I do not
understand.
- from the poem Horse-Chestnut Trees and Roses by James Schuyler -

The tree which moves some to tears of joy is in the eyes of others only a green thing which stands in the way.

...Cinderella at the ball, the common mulberry, so drab and unappreciated the remainder of the year, suddenly (briefly) glows brilliant yellow, a beacon of splendor.

About the wildflowers and native plants:

There are some optimists who search eagerly for the skunk cabbage which in February sometimes pushes itself up through the ice, and who call it a sign of spring. I wish that I could feel that way about it, but I do not. The truth of the matter, to me, is simply that skunk cabbage blooms in the winter time.

Words for wildlife attraction and ecology:

Never give up listening to the sounds of birds.

(Send) leafy, leafy collard greens
And please make sure they're washed!
Light up our eyes
Brighten our lives
With ten banana squash.

Nature will bear the closest inspection. She invites us to lay our eye level with her smallest leaf, and take an insect's view of its plain.

We've heard that a first class head gardener requires longer training than a surgeon or lawyer. Not surprising, since the surgeon or lawyer are working with just one species. The gardener tends hundreds of different plant species and must know the ins and outs of many animal species, too.

The first dahlia tubers sent to Europe from the New World were for eating and not for growing in the flower garden.

Talk about living in the garden:

A single painted gnome sends out a message we think we can read and either tolerate or ridicule. If your immediate reaction is a patronizing dismissal of both gnome and owner, you had better examine very carefully your own trash-filled life.

- Geoffrey B. Charlesworth, The Opinionated Gardener, 1988 -

...I make it a point of honour to have a couple of gnomes in my garden as silent testimony to the right of gnome-lovers everywhere to do their own thing without fear of snide remarks.

Those who stay indoors until the golden flames of forsythia announce to all that spring is here will miss the first crocus...

The most serious charge which can be brought against New England is not Puritanism but February. ... Spring is too far away to comfort by anticipation, and winter long ago lost the charm of novelty.

Last night, there came a frost, which has done great damage to my garden. It is sad that Nature will play such tricks with us poor mortals.

One of the frustrations of my job was not being able to say, "I'm sorry, I can't cover this cosmic event on the other side of the world, because I have to go watch my daffodils bloom."

Said to and by children in the garden:

There is nothing that is comparable to it, as satisfactory or as thrilling as gathering vegetables one has grown.

(Caterpillars) have most wonderful appetites and hardly stop feeding all day long... they grow very quickly; and in a few days time they find their jackets are much too tight for them. Then a most curious thing happens. Their skins split right down the back, and they wriggle and twist about... till at last they manage to creep out of them altogether and appear in new ones, which had been gradually forming underneath the old!
Wouldn't it be nice if we could get new suits of clothes, or new frocks, as easily as this?

In addition, twenty-one issues have been added to the library or illustrated during the last three months. Issue #206 provided links to those issues' 100+ articles and hundreds of photos. All are now accessible on-site with just a click or a keyword Search:

Thank you to many Sponsors who made this increase possible.

We gladly give our time to bring you news
but we rely on your help to keep this
network humming. Please Sponsor us
and help pay the bills for website hosting,
programming support, computer upgrades,
camera repairs and more.

If something we've written or shown you
has saved you time and money, please
consider Sponsoring that article or one like it.

All it takes is an email to us.
We'll register your Sponsorship and then
send you a bill for the amount you pledged.