A potpourri (below) of Centaurea species information, including notes on perennial bachelor button/mountain bluet/C. montana as a supplement to other articles.

A plant-based page rather than our usual topic-based page. It's a pivot point, one list of links to ours and others' articles that involve Centaurea species. 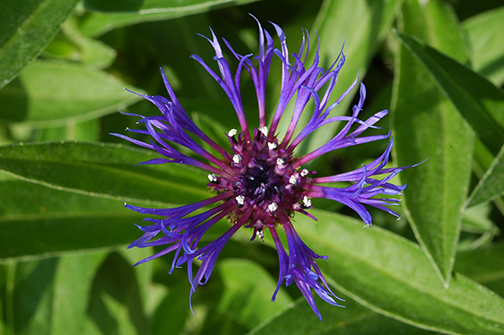 Blue flowers are at a premium in many perennial gardens. Mountain bluet/Perennial bachelor button (Centaurea montana) happens to be in full bloom at peak buying season -- spring. So it's no surprise that most gardeners have snatched one from the shelves and taken it home. Surprisingly, most do not continue to cultivate the plant because of its unkempt appearance after bloom.

Here's the secret that counters that drawback and makes it one of our favorite garden plants: Cut the plant to the ground after its first bloom. As soon as it's no longer breathtaking, just cut it all down. Fresh new foliage will emerge and the plant will bloom again at the end of summer.

Centaurea's disappearing trick also makes the plant a good companion for some early summer bloomers such as lanceleaf Coreopsis (C. lanceolata) that come into their own after the Centaurea's been cut out of the picture. By late summer when the second plant is ready for its own cutback for neatness' sake, the Centaurea has made its comeback and is developing a second bloom. 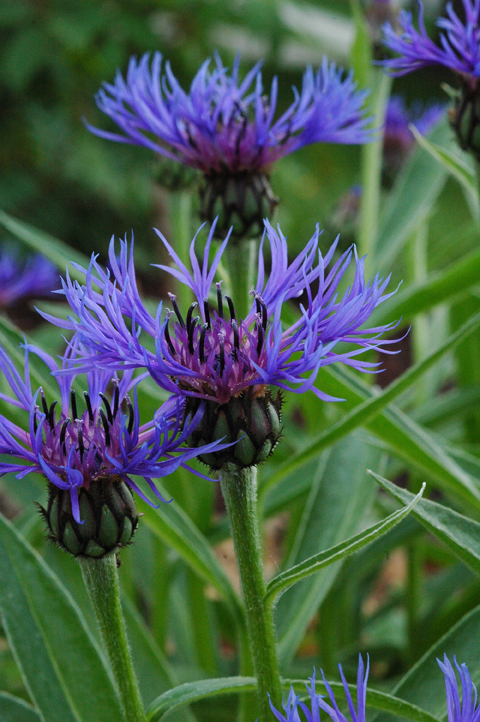 We're just introducing this set of perennial info pages. This page is in process but  Aster's page is complete. We hope you'll take a look there and comment. Let us know if the format was useful, share your suggestions, tell us we shouldn't have this page at all... anything helps.