A potpourri (below) of poppy/Papaver species information as a supplement to other articles.

A plant-based page rather than our usual topic-based page. It's a pivot point, one list of links to ours and others' articles that involve Papaver species.

We're just introducing this set of perennial info pages. This page is in process but Aster's page is complete. We hope you'll take a look there and comment. Let us know if the format was useful, share your suggestions, tell us we shouldn't have this page at all... anything helps.

There are so many poppies worth growing that whole books have been written to describe the cultivated species. If plants outside the Papaver genus that bear a common name "poppy" are included (California "poppy" is an Eschscholzia, horned "poppy" is a Glacium, etc.) it's a totally unwieldy bunch. So we'll start this page with a few of the common Papavers, see how far we get before it becomes cluttered, and decide then how we'll divide them!

Oriental poppy (Papaver orientale) may be the easiest, showiest, but also the most frustrating poppy to grow. It will grow almost anywhere in the sun that drainage is good and it's hardy almost to the Arctic Circle. In bloom it is spectacular but the season is very short and is followed immediately by a deterioration of the foliage that creates a large heap of fading, tattered greenery. Eventually, there's a big gap as the plant takes the summer off. New foliage emerges and may persist through winter in warm climates but it's not especially attractive.

Our answer has been to double-up every oriental poppy with a late emerging perennial such as a hardy Hibiscus moscheutos hybrid, and cut or snap off the poppy foliage right after the flower petals fall. We do not see any ill effects to established plants and the companion plant can generally plug the gap.

Iceland poppies (Papaver nudicaule) can contribute big bright flowers to a sunny garden in a wide range of colors without putting you through oriental poppy-type aggravation. Sow the seed, allow mature plants to set seed, don't mulch heavily where that seed falls, and you will probably enjoy successive generations of these short-lived perennials. 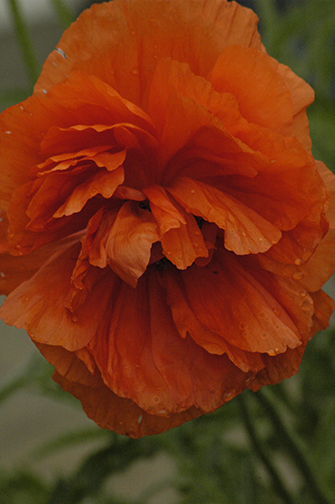 Colonizing perennial field poppies are not a good idea in a conventional perennial bed. We learned this, as many lessons, by personal mistake -- we took a division of the Papaver xx we saw at a friend's home, added it to our garden and have it still, 40 years later despite having tried to subtact it every year since. (The "x" meaning we've spent as much time unsuccessfully trying to identify its species as we have trying to dig it out.) If you think you want a mass of poppies and know where some are growing, investigate first and accept a piece only once if you are sure it's an annual.

Even though the foliage of the perennial poppies does die back and during the second half of each growing season you may forget they're there, the dying leaves can drive a tidy gardener mad. The greenery can be clipped or pulled, a la oriental poppy but it's a tedious job to neaten the plants' ever-expanding area each year after bloom

The quasi-legal opium  poppy/bread poppy (Papaver somniferum the ancient pain remedy is illegal to own as a plant, pod or straw but is legal as seed for baking) is an annual plant and so should not qualify on this page. However, it can be a reliable garden resident as a self-sower and so showy that it garners a lot of attention. Collect seed from plants with the color and doubleness of your choosing from some other innocent gardener and be aware that you're a law breaker in growing it on. Enough said.