A potpourri (below) of purple coneflower/Echinacea purpurea information as a supplement to other articles.

A plant-based page rather than our usual topic-based page. It's a pivot point, one list of links to ours and others' articles that involve purple coneflower.

We're just introducing this set of perennial info pages. This page is in process but Aster's page is complete. We hope you'll take a look there and comment. Let us know if the format was useful, share your suggestions, tell us we shouldn't have this page at all... anything helps. 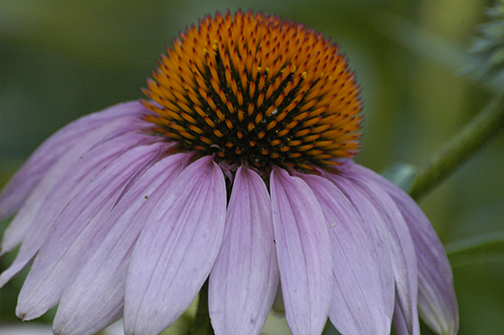 We admire them most but the showy petals are not the true flower. The central disk of this Echinacea holds the fertile, nectar producing flowers in concentric rings. Butterflies and other nectar sippers return day after day to find a new ring of flowers ripened. Likewise, seed eating birds can find a meal a day over a week or two.

It's not purple (it's pink; sometimes rosier, occasionally creamy white). It's not one of the gang of Rudbeckia called coneflower. It's recently been crossed with about every other member of its genus (E. paradoxa, E. pallida, E. tennesseensis) in pursuit of a wider range of color and perhaps some resistance to the increasingly troublesome virus, aster yellows.

We're going to stick with describing only the straight species, E. purpurea, long one of our favorite perennials.

It wasn't purple coneflower's fault that gardeners lost it as if in a plague, in the 1990's. We suspect that was a result of the popularity of clonal (not-from-seed) variety 'Magnus' with its bigger, wider open, deeper colored flowers. That plant may have bright with it a susceptibility to the virus that transferred to the garden in the seedlings from spontaneous crosses. Who knows? We know we're watching for and will embrace any really vigorous new hybrid(s) from the (so far disappointing) new crop of orange, yellow, double and otherwise fancy Echinaceas.

Meanwhile, if any of our grown-from-local-seed purple coneflowers show signs of virus, such as sudden black wilting of stems, we dig that plant and burn it. We hope one day to have in our own garden or others', the carefree, long blooming drifts of purple coneflower we used to take for granted.

Below: Newly opened purple coneflower blooms hold their petals nearly horizontal. As the flower ages the cone grows more domed and the petals reflex -- they appear to droop.