Monet's Garden at Giverny captured in the Bronx

11 o'clock on a fine Sunday morning

Such a fitting juxtaposition of gardens.

Both Monet's gardens in Giverny, France and the New York Botanical Garden were originally created in the late Victorian era, each on property across the road from a railway. Monet lived at Giverny from 1883 until his death in 1926. He was eyeing the property across the rails from his home and envisioning a pond when the NYBG was established in 1891. While Monet was excavating the water lily pond and building his famous bridge in 1893 and 1895, the NYBG was hatching the grand plan for its Victorian style conservatory that opened in 1902 and in 2012 featured gardens modeled on Monet's Grand Allee. 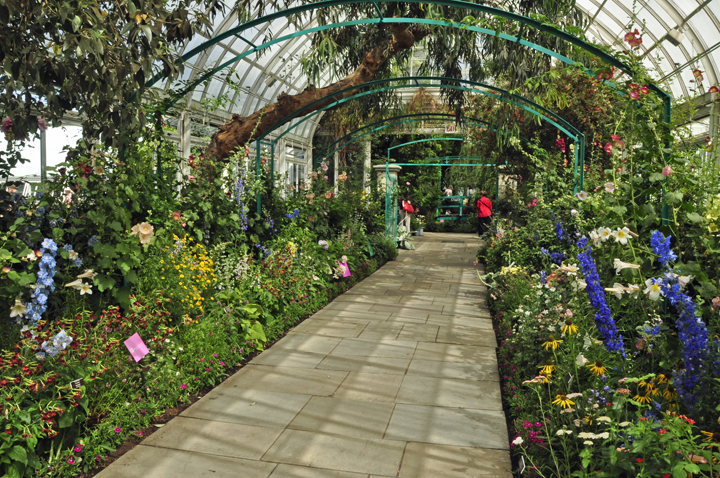 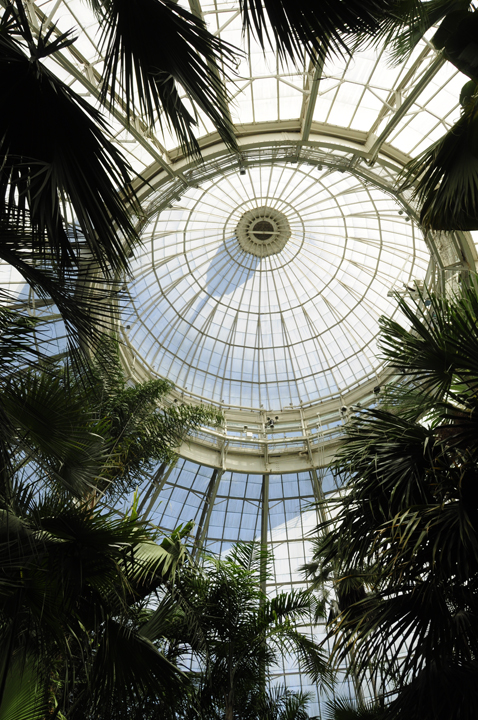 The best thing about visiting public gardens is taking away ideas for our own gardens.

Right: This painting reflected in the pond adds dimension and color to the area. It could serve as a strategic vertical screen in a pond in a small city garden, too. Hmmm... I could do something like it in our pond with one of my photos printed on cloth.

At the 1889 World Fair in Paris, Monet saw new water lilies, far more colorful than what had been available. The new varieties (some still were hybrids of European and North American species and captured the whole spectrum in their petal colors. Like everyone else who becomes wrapped up in a garden, he had to have them and began ordering them as soon as he had his pond dug. 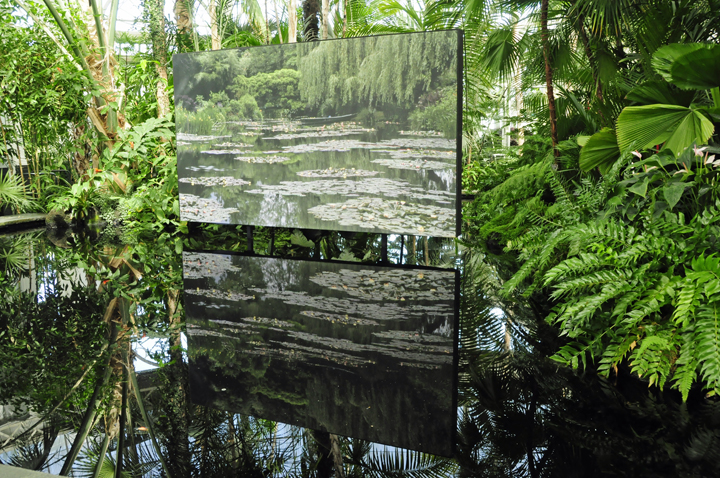 "All my money goes into my garden," he wrote.

Monet tried lotuses, too, but they failed to thrive in Giverny. (Always fascinates me to consider European climate... such as how Giverny can be on par with both northern Ontario and northern Florida!) 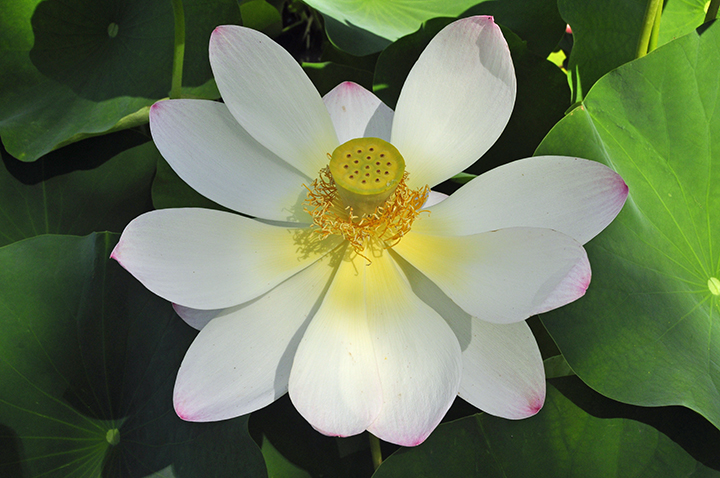 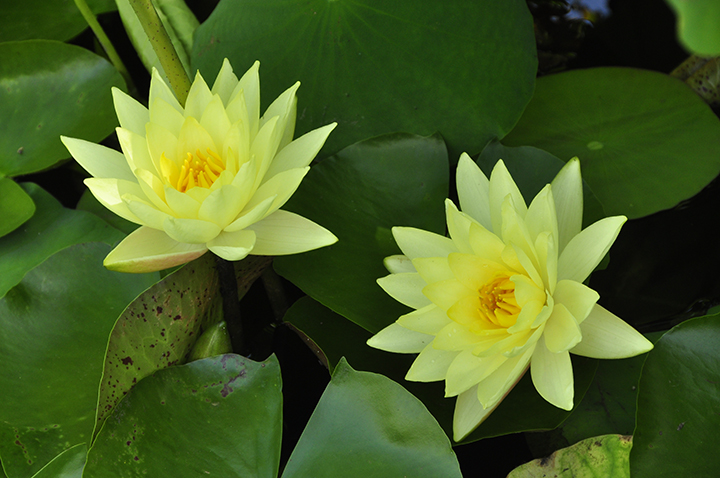 A print of a Japanese garden inspired Monet's vision for his pond and bridge. True to form he went his own way on color. No red bridge for his pond! It's blue-green, as are the iron arches over his Grand Allee.

Color is my
day-long obsession,
joy and torment.
- Claude Monet - 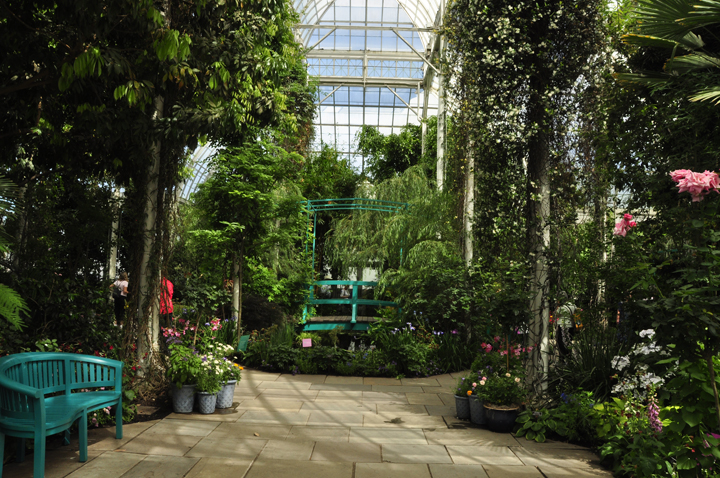 My garden is my most beautiful masterpiece. - Claude Monet - 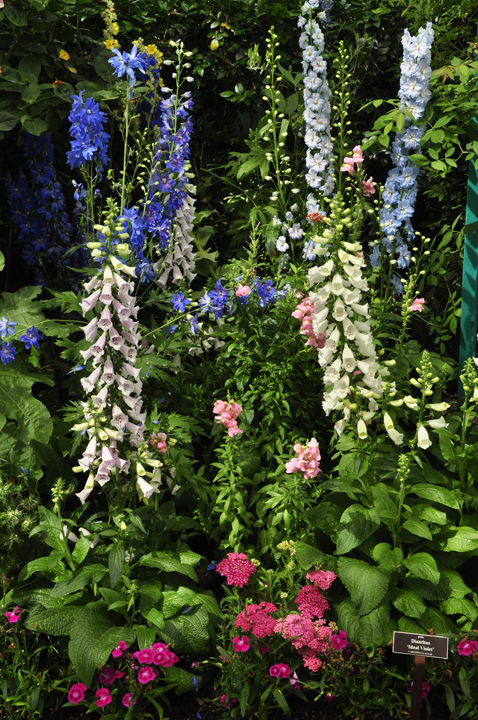 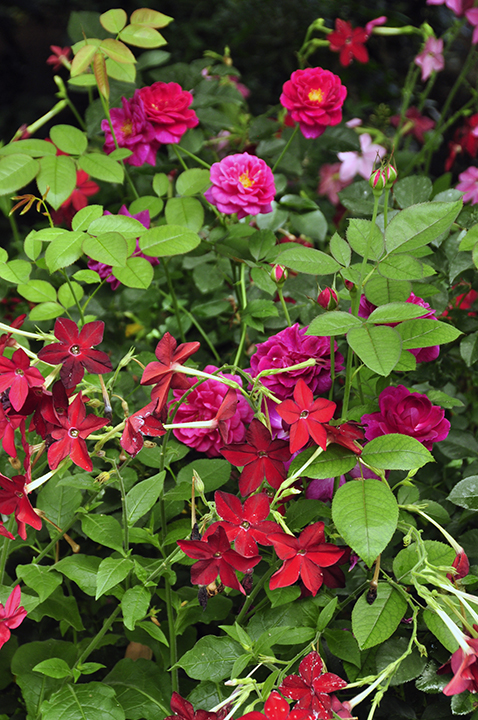 When Monet was painting works such as Water Lilies...

...and could afford a 5-gardener staff to maintain his 4+ acres of cottage garden and pond, the plantings at Giverny changed throughout the year. Literally. Some plants remained in place but many others were moved in and out to keep the color flowing. From blue, violet and pale yellows in spring (irises, pansies, bulbs, etc.) it morphed to rich pinks, blues and burgundy (peonies, delphiniums, bellflowers, roses) and on into hot hues by late summer (red dahlias, yellow sunflowers and orange nasturtiums).

Above, left: Cool and pastel foxglove, delphiniums, snapdragons, dianthus and larkspur have their turn, but the gardeners won't be doing as much deadheading as clever replacing, so summer can end in a wholly different color scheme.

Above, right: Then, Zinnia and flowering tobacco start to turn up the heat.

Even understanding the process intellectually, it strikes me at gut level. I look at these densely packed beds, which capture just a portion of Monet's 100-yard Grand Allee and think, "What a lot of work, and what a dance to swap in and out in such tightly planted spaces."

The NYBG staff is obviously up for this challenge. These irises, foxgloves and delphiniums must have been swapped in since the exhibit opened, and will soon be changed out for dahlias, nasturtiums and zinnias. By October when this display ends in sunflowers, asters and goldenrods, they'll have kept pace with Monet's best, "painting" with about 600 varieties.

The quality of light, color... and water

I look down into the water from the bridge and wonder, "Did Monet battle pond-choking algae?" He must have! Come to think of it, the gardeners in Imperial Japanese gardens probably did, too, since 'way back. How did they do it? Did they, like we, seek out other pond tenders to talk natural balance in terms of fish density and what portion of the water to cover with floating- and aerifying plants? Did they swap secrets about submerged bales of barley or adding powdered stone of certain (chemical) type? 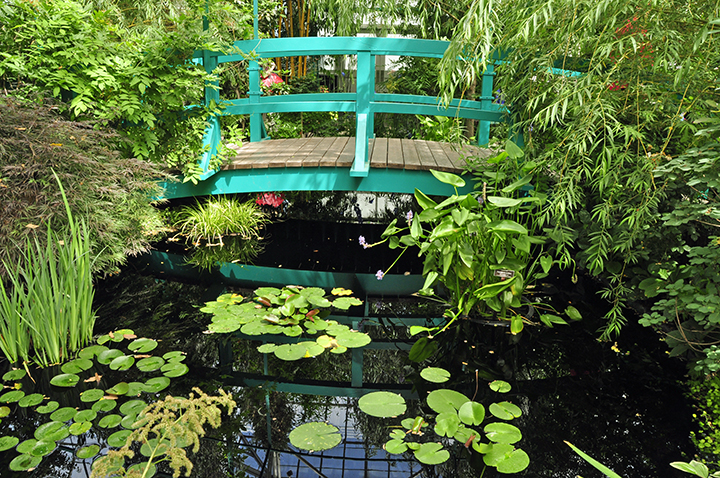 I haven't yet ferreted his water quality tricks, but I've learned that Monet did confront and eventually woo local authorities to keep his pond, after failing to get proper permits before changing the stream's flow to create his vision. (Am I surprised that such regulations existed? No. The U.S. congress enacted the Rivers and Harbors Act in 1890, with permit requirements for obstruction or alteration of navigable waterways.)

I also found that Monet charged his gardeners with rowing out to clean railroad soot off the water lilies each morning. And, since he's all about light and reflection (he said, "Take clear water with grass waving at the bottom. It's wonderful to look at, but to try to paint it is enough to make one insane.") So I'm going to bet he objected to water-dulling algae, fought it with whatever means were at hand and so we have that in common.

"You there, dragonfly. Will you sweep that bit of soot off the petals while you're there? That's a good fellow." 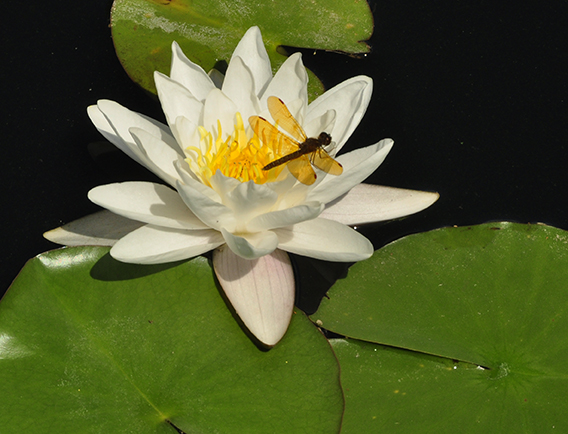 Thorny issue of all those roses

Lots of old roses are climbing on the arches here. Roses featured everywhere in Giverny. As one who is currently nursing the wounds of rose deadheading and cutback season, and who has a great respect for the nastiness of some shrub rose thorns, I feel for Monet's gardeners and the NYBG staff. Youch. Maybe they've already tucked aloe into strategic places... 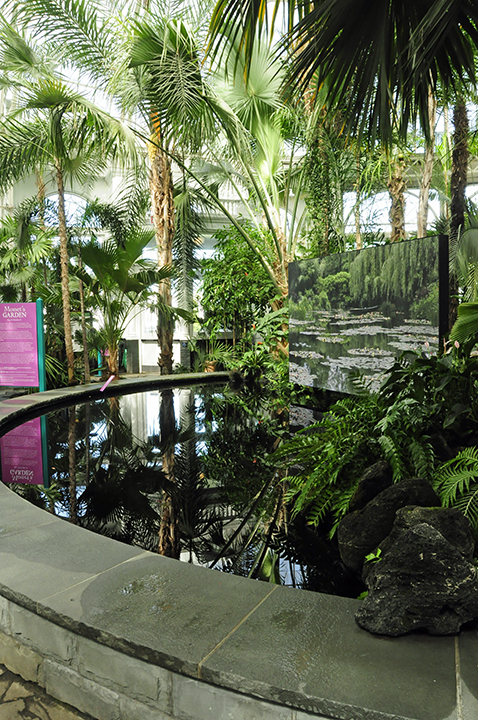