Hard to say no nut sedge

Green thumbs down, yet what a weed:
Nutsedge demands respect and multiple digs

(Lots of info here with more photos coming altbough those won't happen right away. We yoinked this forward from queue in response to kind of a flood of nut sedge questions on our email and at the Forum, but no time to do more just now ...)

A sponsor could change that quick! Sponsor us and name nutsedge as your choice for your page.)

Nut grass or nut sedge/nutsedge (Cyperus esculentus) is a 6 to 8 inch tall, grass-like plant with light green blades that appear to have been creased into v's along the mid-rib (the center vein of the leaf, that runs from base to tip). It's a perennial that stores energy in a special root structure - the nut - that forms at the ends of the roots.

This weed is a warm season plant. It doesn't begin growth until the soil warms up, so we don't usually see it at the surface until early June. That's a problem, because most of us try to clean up perennial beds in April. By June our desirable plants fill in, hiding the surface. Nut sedge that emerges at the feet of our perennials is hidden, and can build up steam before we see it. 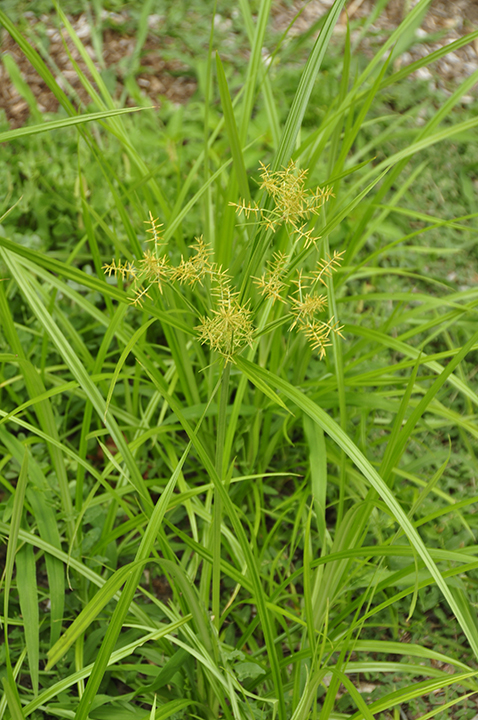 When it blooms (above), nutsedge really gives itself away as not-lawn.

So if you know that nut sedge is a problem in a bed, it's important to start looking for it in mid June, "lifting the skirts" of the perennials to check for nut grass at the base of the stems. Then you follow standard weed eradication measures, with modifications for this species' particular ways.

It takes persistence to get this species out of a bed once it's gotten established. Water the bed well before weeding, and use a garden fork to loosen the soil 8 or 9 inches deep before pulling it. Sometimes this means loosening the perennials, too, but that's okay, when you use a fork. Some nut sedge root may still break off, but you'll get most of it. 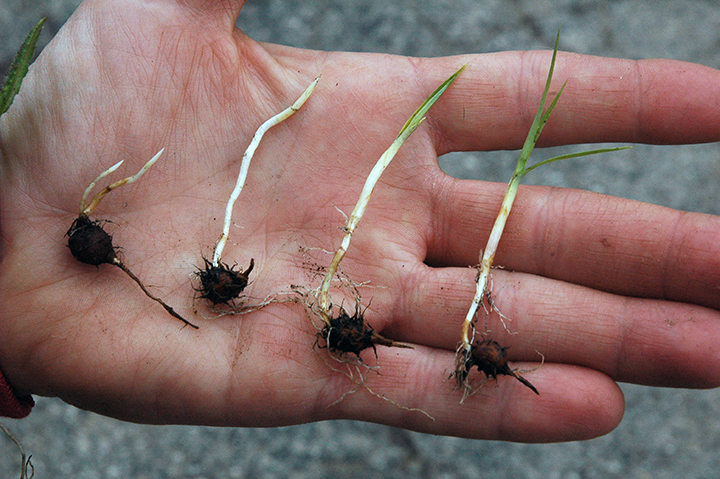 Follow-up weeding is essential, weekly through June if there's a substantial amount of nut grass. Each weeding will get the new plants that are just emerging for that year. If you are getting out the nuts as you weed, yet grass is reappearing in only 3 to 4 days, you're probably seeing new plants just coming for the year, not a second growth from roots you left behind.

By July, you can switch to a schedule of weeding every 3 weeks. That's about how long it takes for plants to regenerate and appear above the surface from nut remainders.

Right: When it's not actively growing, nutsedge (nut sedge) is tough to find, as the nut blends so well into the soil.

You can kill nut sedge with an herbicide such as Round-up, Kleen-up or Finale. All of these work through the leaf to kill the root, without making the soil toxic to remaining plants. There are two drawbacks. 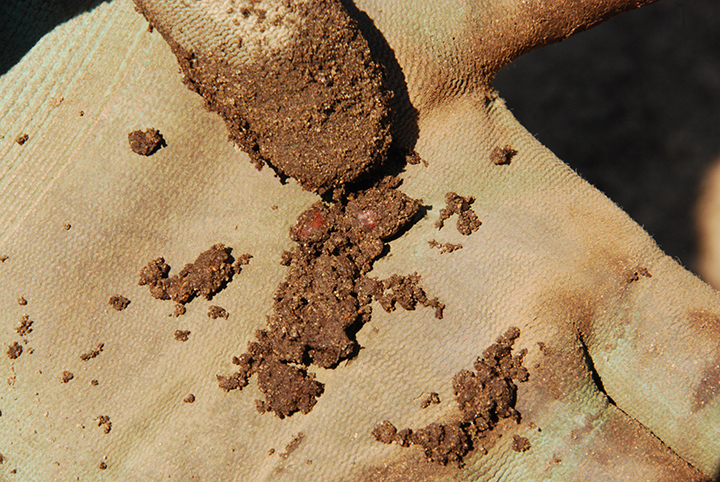 One, you can't just mix up the chemical and spray away. You have to spread the solution on the nut sedge leaf without getting any on the leaves of desirable perennials or annuals. The procedure for accomplishing this is called wicking, and it's tedious work. Generally it's done by painting the herbicide solution onto the leaves with a disposable paint brush, or patting it on with a sponge. Some people even put on heavy rubber gloves and outer cotton gloves, then use their fingers to apply it. The cotton acts as the sponge, and the rubber keeps the chemical off the skin.

The second drawback is that multiple herbicide applications are usually required. The leaf absorbs the chemical, converts it into a hormone during photosynthesis and sugar production, and sends some of it into the root for storage. Once in the root, this hormone is deadly. Yet the root system may be more extensive than the leaf surface at the time of herbicide application. In that case, since leaves can only produce the root-killing hormone in quantities equal to their size, only part of the root is killed and a second application is necessary.

The way we see it, if you do all the work to wick on a herbicide, and make a follow-up application three weeks or a month later, you won't save much time. Also, considering the price of herbicide, brush and gloves, you will have paid more for the same result.

It's often depressing to deal with weeds, and all of us wish for a magic wand though we know in our hearts that none exists. We have two favorite books that console us in such times. One isAll About Weeds, by Edwin Rollin Spencer (Dover Books, New York, 1968), and the other isWeedsby Walter Conrad Muenscher (Cornell University Press, Ithaca, New York, 1980). These books have taught us the true names and natures of weeds - valuable lessons, that fit with what we heard as kids, "It's more powerful to curse it by its right name."

Both books list various strategies for controlling specific weeds, and since the authors have actually "been in the field" - one as a farmer, the other as an extension service botanist - the advice is practical. Though we long for a magic wand, it's comforting to hear from those who've been battling weeds for much longer and in greater quantity than we have, that there is hope.