To the losses that unite us and open discussion that helps us beat them.

From commoner to botanical garden horticulturist, we all lose some of what we plant. Knowing that can't make up for the time, money and hope lost when a treasured plant dies, yet it is good to know that we're not alone in this.

How much do we need your Sponsorship?

We recently listened to the directors of some of the country's top botanical gardens publicly discussing loss rates as matters of fact. (This as they participated in a panel discussion at a conference.)

So what difference is there between the guy next door who planted this hedge, and the pros?

Maybe it's success rate -- that the top guns don't lose so many of the arbs in a new hedge? 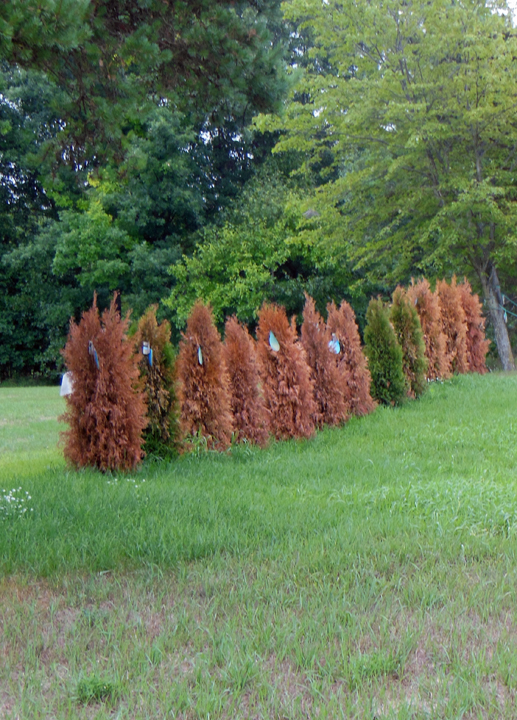 What a shame! Yet it leads us to a Thumbs Up.

Surprisingly, although big losses are not common in botanical gardens, they do happen. We've seen it, and heard stories, such as from one garden's horticulturist whose very large project started off with a 33% loss rate.

Closer to the mark: That the pros are less likely than Average Ann or Andy to experience such a loss twice. To grow like the pros, figure out why plants failed, then replant only once you've changed the underlying causes.

Back to those poor arbs

Which is why we've been conducting a serial investigation of these arborvitae deaths. The hedge is not the property of anyone we know or have yet managed to meet on the walks that take granddaughter Elizabeth and Janet past this property. So far we've gathered information without benefit of interrogation.

We can see that the gardener made a valiant effort to keep the plants watered, with over 100' of hose feeding a soaker hose at the shrubs' base. Even at our first encounter, during the driest, hottest part of this summer, the soil was cool and moist there. The plant label people probably deserve some credit there. 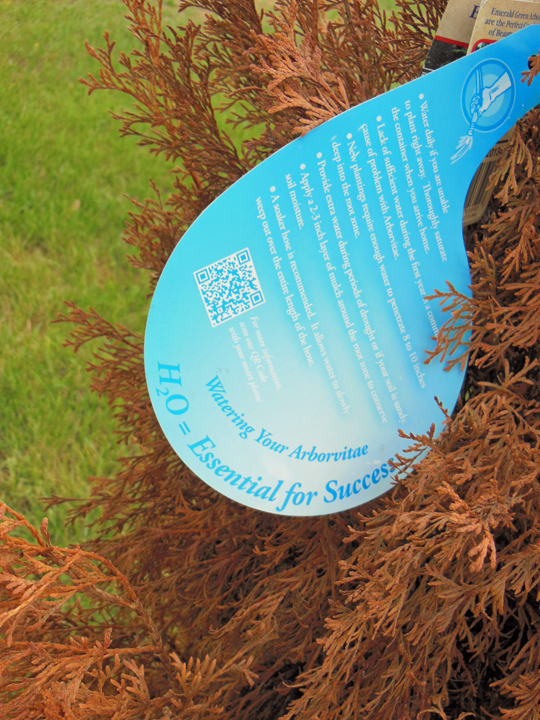 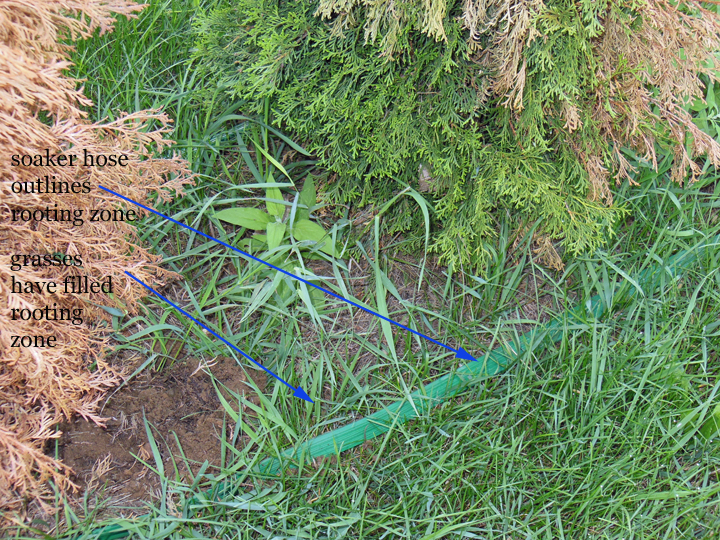 The grass growing right up to the root balls may have had more impact than one would suspect. Grass is an extremely determined and able competitor for water. Weed grasses such as quack grass even conduct a chemical warfare. Yet we expect grass to slow an arb's growth, not prevent or stop it entirely.

Higher on our list of likely causes of death is planting depth. Sadly, this would probably not have been something the gardener knew to look for. It's not common knowledge -- although we're trying to get the word out, and so are others! -- that trees and shrubs are very likely to come to the gardener already too deep in their pots or root balls. Not only would the average person not know to look for that, they probably would think we exaggerate to say that three or four inches too deep can mean death to roots.

So far we've only been able to poke around at the base of the failed plants. What we see there are branches sticking up out of the ground. Not a good sign.

Below, left: The needles and small branches at the base are not dry brown but gray and flexible, indicating they died with water inside. That points away from drought and says "find other causes."

Below, right: It's a visually confusing scene at the base of the trunk, so we traced what we see to point it out to you. Main trunk is sketched in white, branches in purple. The small branch Janet's tugging on goes not to the trunk but into the ground at a distance from the trunk (arrow marks the gap between branch and trunk). Judging that angle into the ground, the branch might be attached several inches below grade. The root flares may be an inch or two deeper than that and if so there is a lot of soil smothering the roots and a root ball cut so low that it may have had very little viable root when planted. 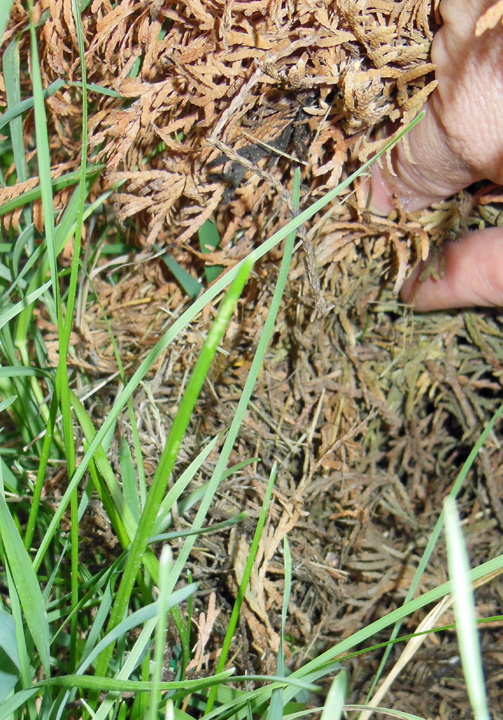 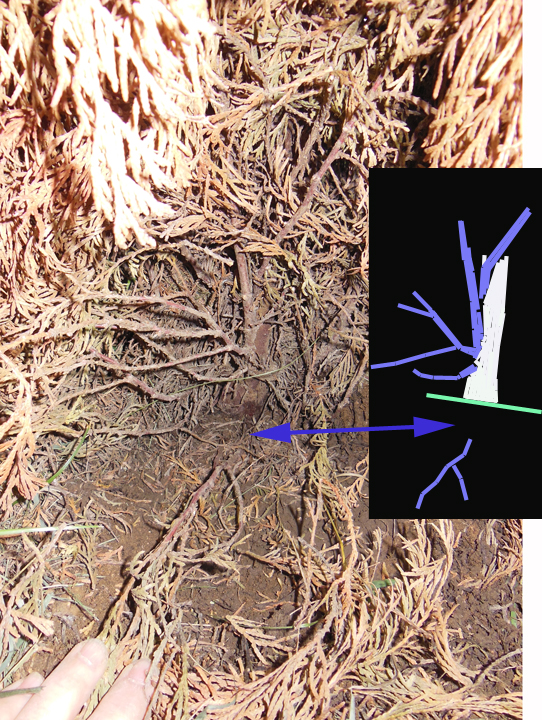 When we do meet the gardener and ask permission to excavate, we'll update this to tell you what we find.

Above: Here is why a tree planted too deep (left) will lose so many more roots when it's dug for sale, than one planted at the right level (right).

Which brings us to another realization:

Hoo boy, do we need Sponsors! This illustration comes from our magazine, Janet & Steven give you Trees, sales of which provide essential operating fees for GardenAtoZ.org. Yet the magazine also has a great deal of pivotal information we could dearly use here on the website... if only you would Sponsor us we can start posting some of that magazine ahead of time! 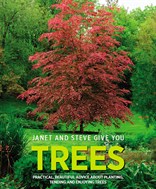