Clean up the gray

It was a banner year for mildew. It showed itself later than usual and hit harder when it came. 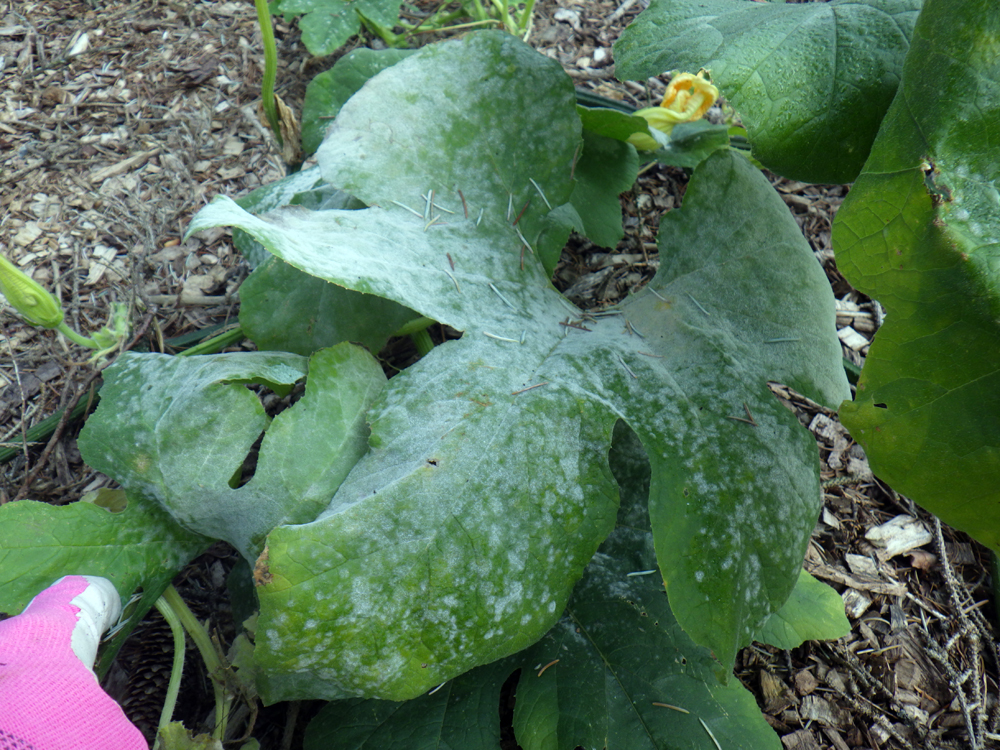 We recognize mildew when it reaches its reproductive stage and coats leaves in gray fuzz. Here, on a pumpkin leaf. 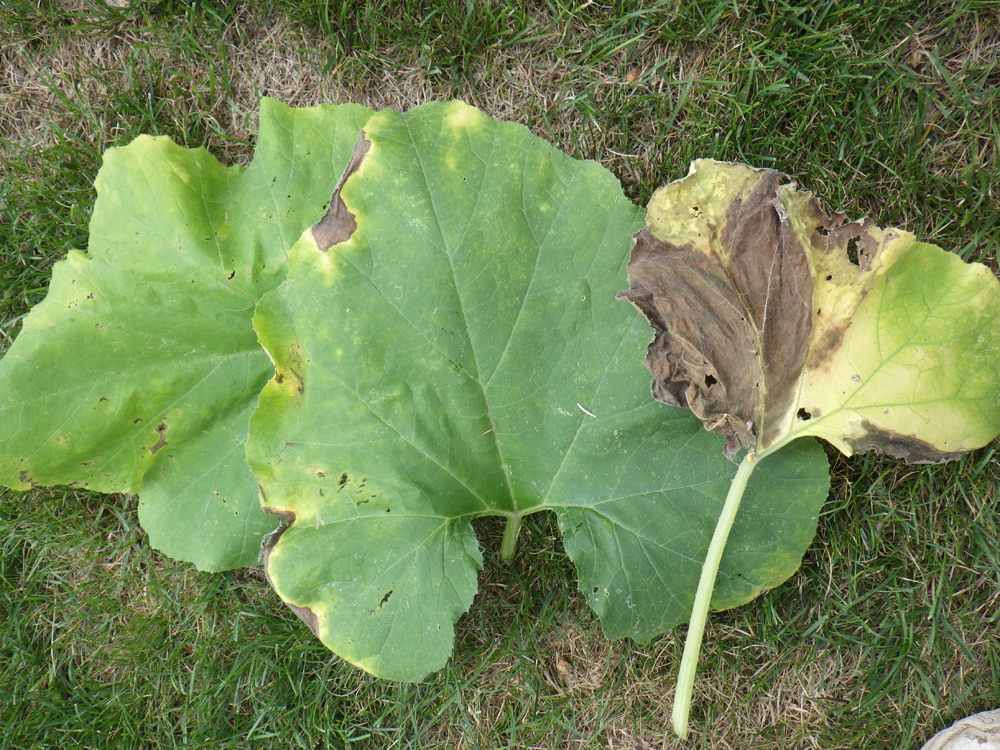 However, mildew is at work before its gray phase. It infects leaves, steals nutrients and causes yellowing, browning, and leaf death. Here it is at work a month before the previous photo.

Often, gardeners who know their phlox or bee balm or cosmos is prone to mildew will scout for gray but fail to recognize the disease when it causes leaves to brown and die.

(Help recognizing mildew at Mildew Has Many Faces and Key Words Unlock Problems.)

If we were play-by-play garden broadcasters, this growing season’s week by week commentary would have sounded like this:

Until late July, when:

“Check out that gardener’s moves, cutting out discolored leaves in veg beds.”

“Will you look at that, Janet?! Even fothergilla and boxwood are mildewed!”

“Give it up now, team! This win goes to the Gray Tide!”

No escape but desert dry

Mildew fungi are ubiquitous. In the U.S. desert southwest farmers can grow crops that fail elsewhere on account of mildew susceptibility. Yet it’s not an absence of fungi that creates that haven but a lack of humidity. It’s tough growing for fungus where the air is very dry. Our most common mildews can grow and reproduce only when temperatures and humidity are just so. 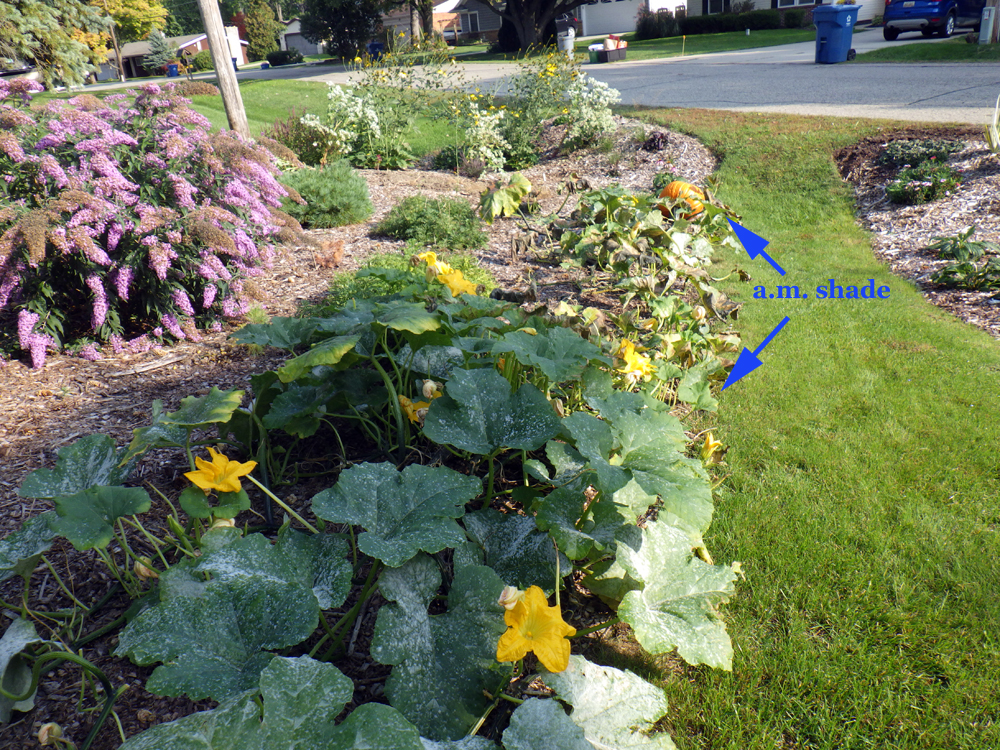 The hardest mildew hit this 60’ long pumpkin vine between the two arrows. Why? That section is in the shade all morning. Dew takes longer to dry so fungus has extra growing time. Spres that drift onto the leaf might have enough humid hours to grow into the leaf.

Late hit, across the whole line-up

“Just so” didn’t happen in our area until late July this year or even early in August. However, when it came, this fungus showed its gray face not only on its usual hosts - phlox, bee balm, zinnias, cosmos, squash, lilacs, etc. – but also on the leaves of redbuds, peonies, and many other plants. If you’re wondering this fall why a plant’s leaves are unusually dulled, cupped or coated, make mildew your prime suspect.

In most cases, mildew had already infected leaves by midsummer and was at work, stealing nutrients. It simply did not experience favorable weather and could not enter its reproductive phase – producing its distinctive gray spores – until late summer.

To the compost wit' ye!

The smart move now is to clean away the gray. Hot compost the infected leaves or at least move them as far from your most mildew-prone plants as possible. Then, next year, recognize mildew in its earlier stages and do more leaf clean-up. 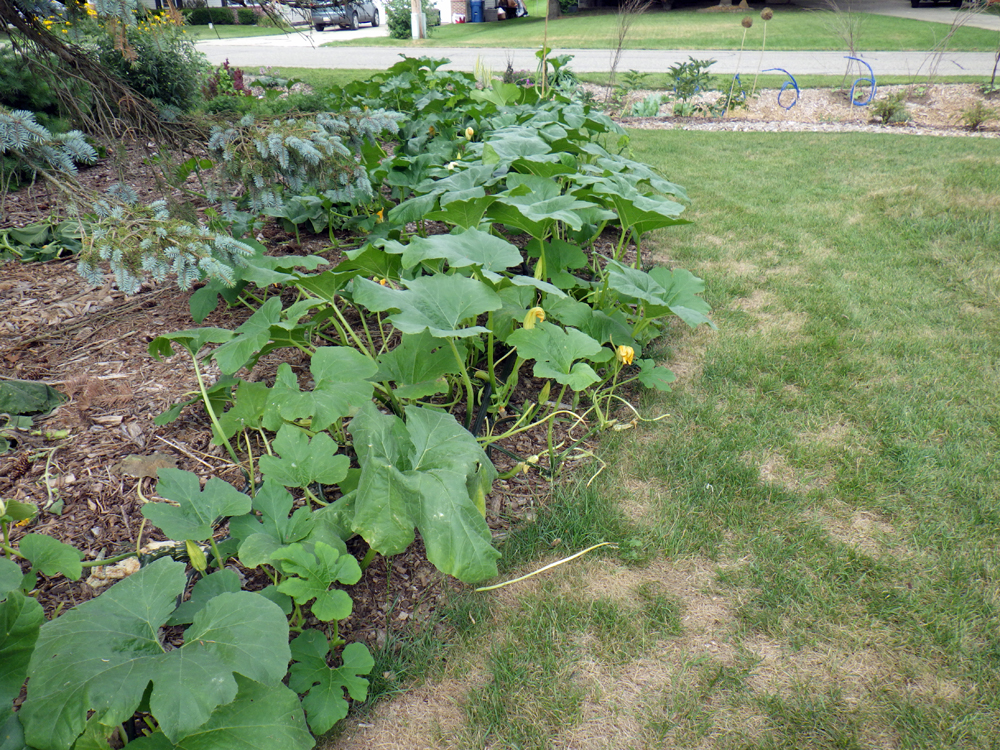 0904 We kept that pumpkin growing well for much of the summer by patrolling for discolored leaves every day or two... 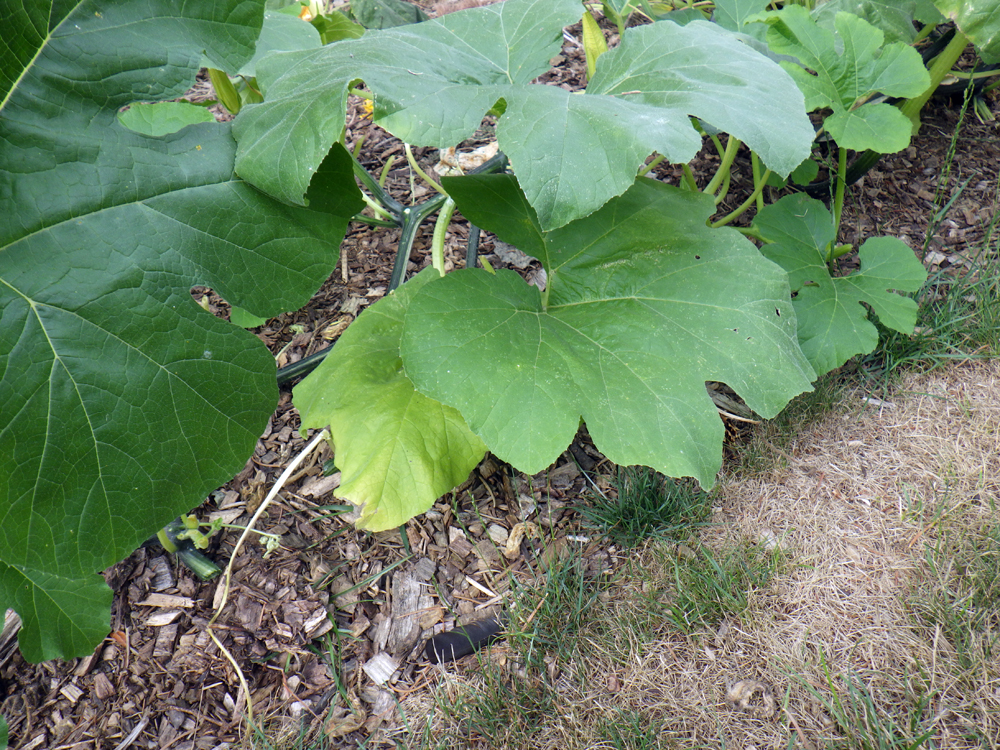 ...merciless as we cut them out. 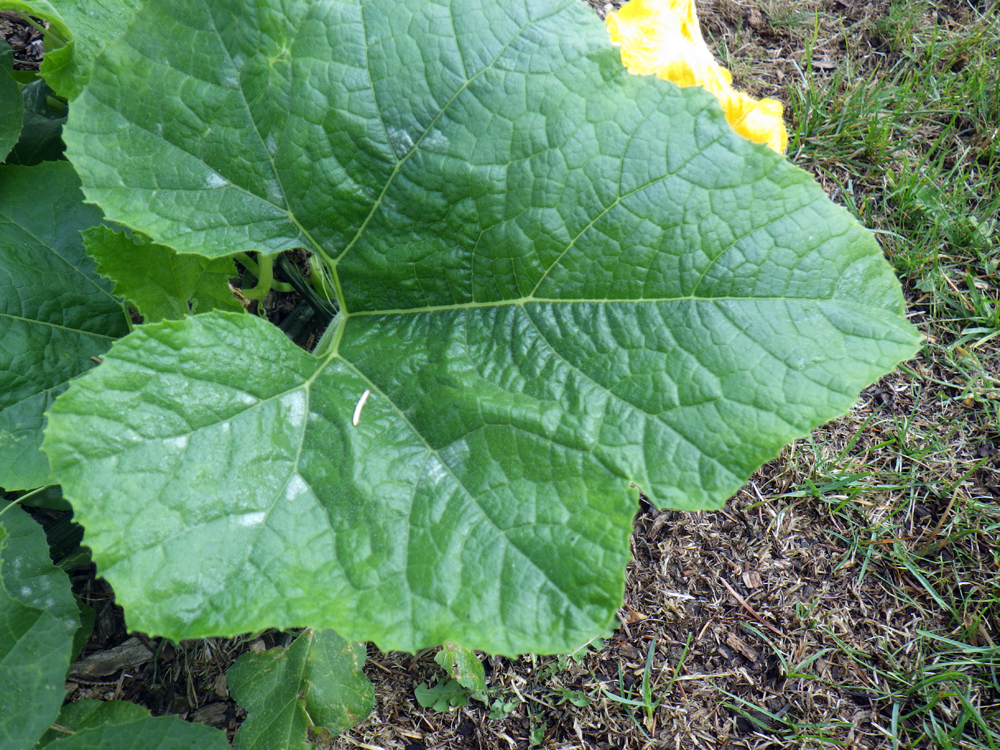 A plant is better off with just a few healthy leaves than a bushel of fungus infected foliage. 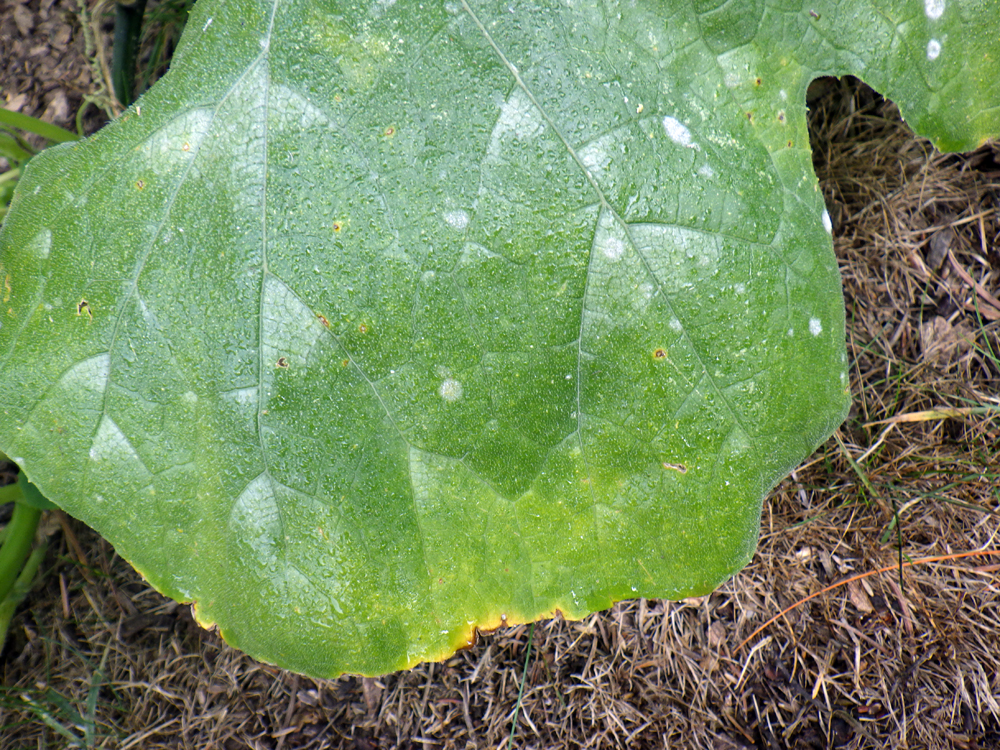 You should remove leaves that have areas becoming pale as if being drained of green, or where you see dusty gray patches.

Keeping the pumpkin vine healthy has been a chore made more bearable because we aren’t protecting only that plant. There are our late beans to consider. (Late because their towers were in use for a very long time this year by pea plants that went on and on into August. What worked against mildew seems to have favored peas.) 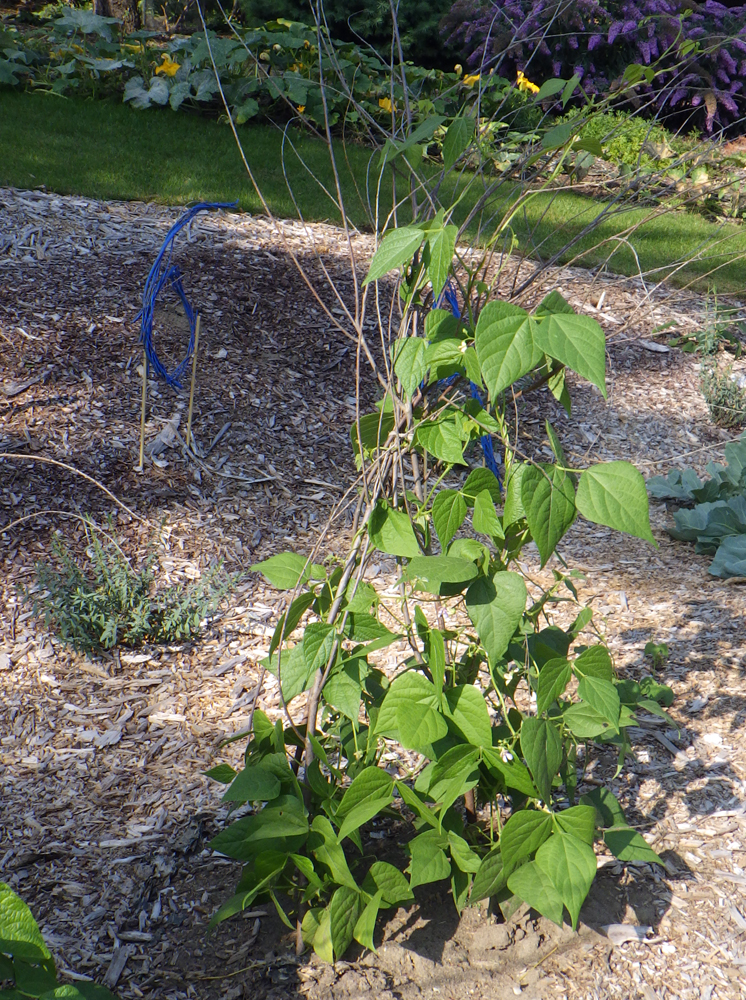 Our late crop of beans, just coming in. 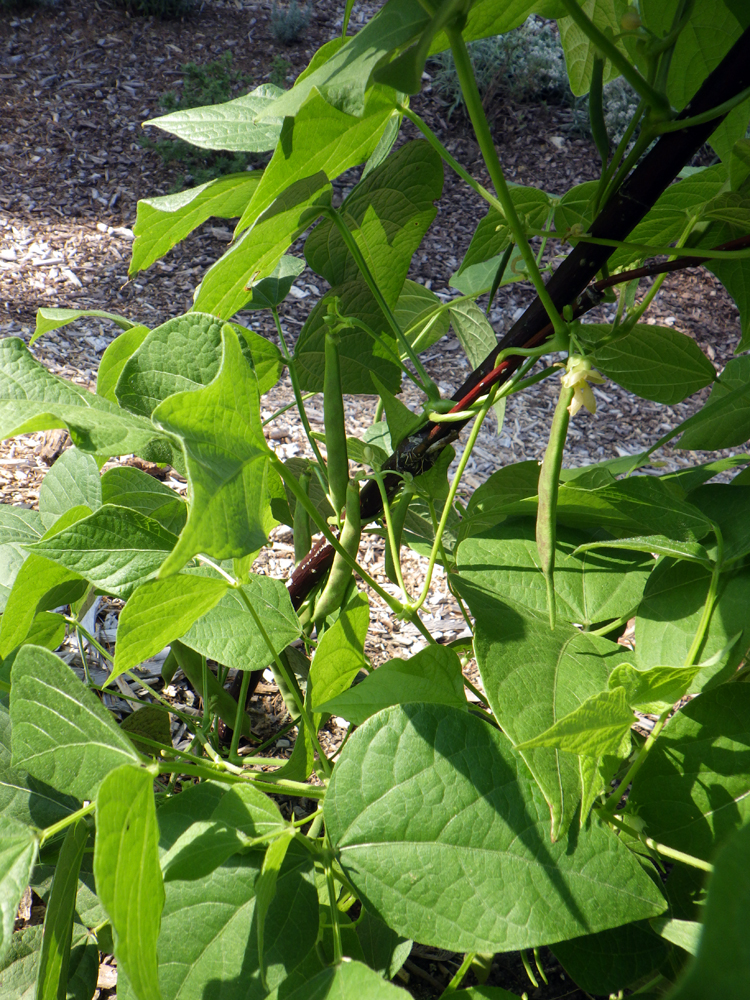 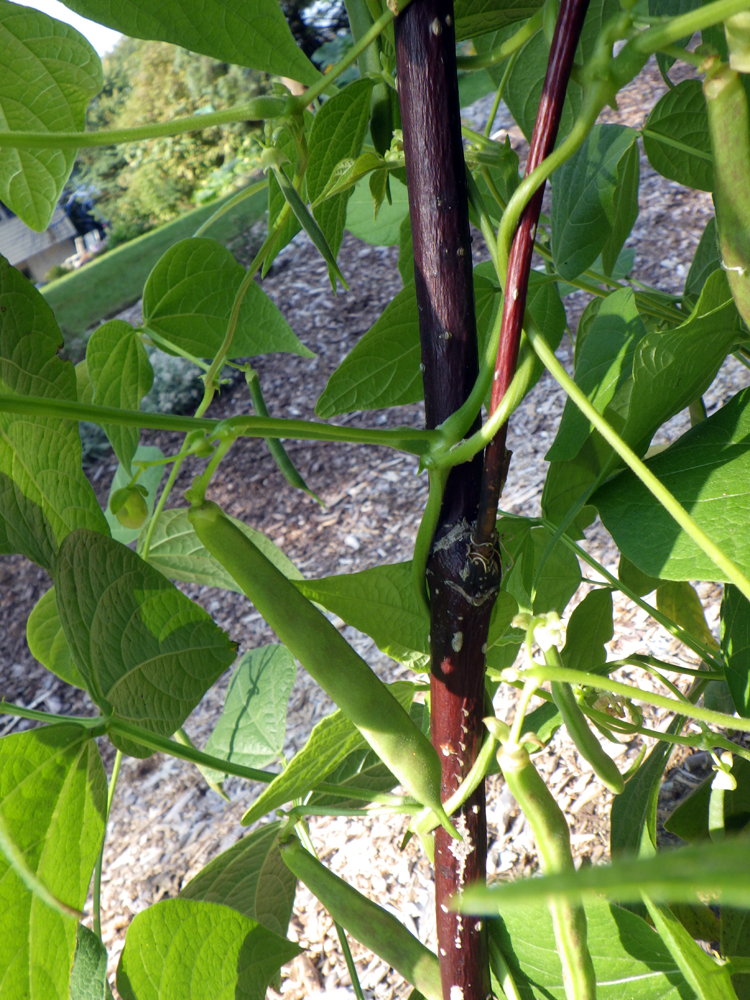 We want those beans! 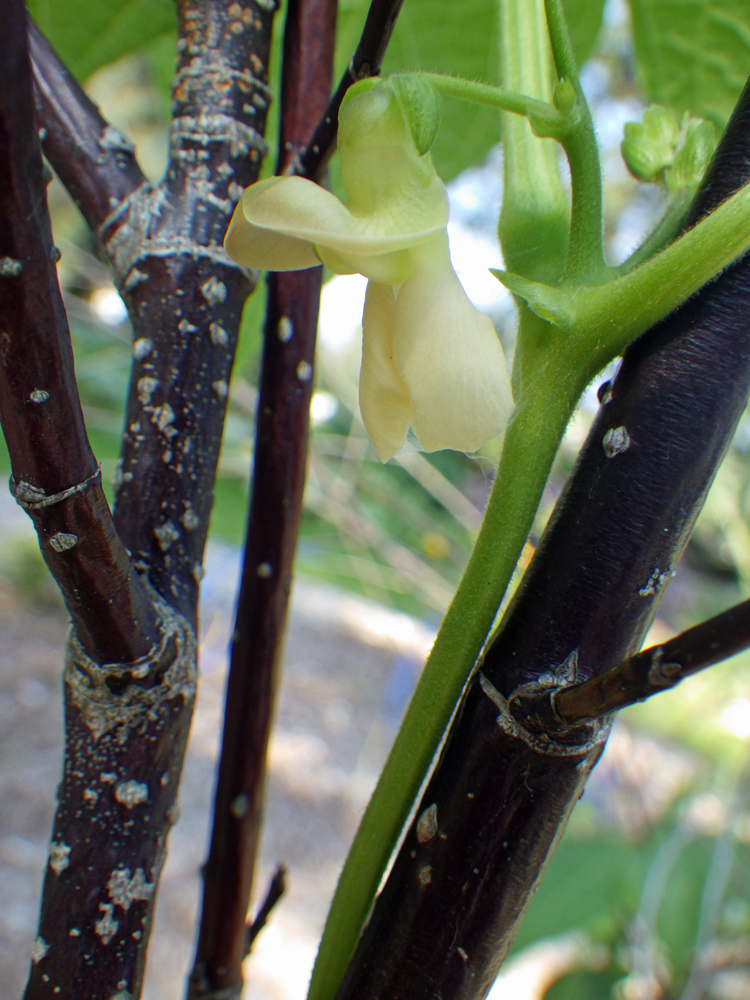 Mildew threatens flowers, too. If we lose the flowers, bye bye future beans.

In addition, consider relocating the worst affected plants to better sites, because stronger plants resist infection. Look into mildew resistance, too. A plant that mildews every year is not pulling its weight. There are mildew resistant varieties of just about everything. Now may be the time to retire some and bring in fresh players. 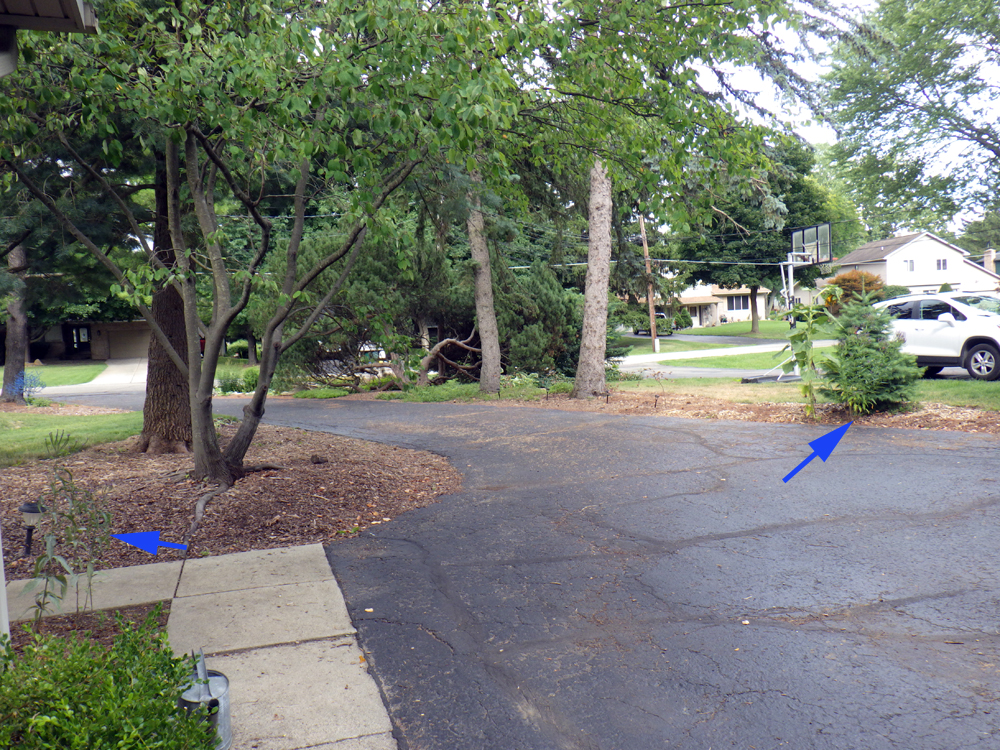 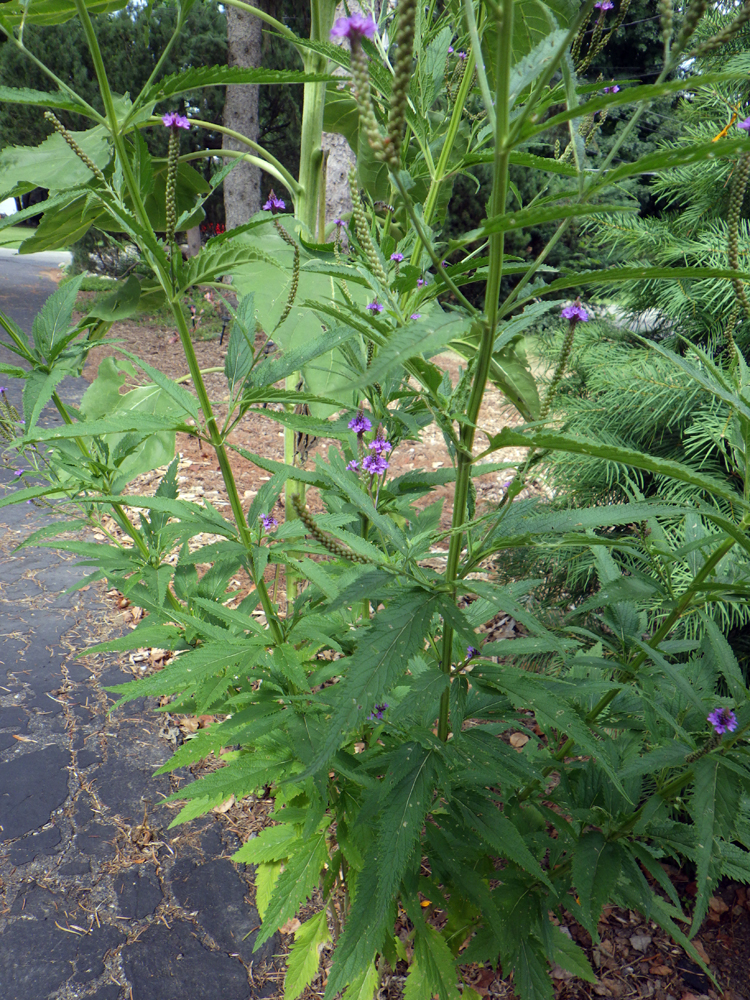 The plants in more sun and where the air moves more freely are green, full and long-blooming. 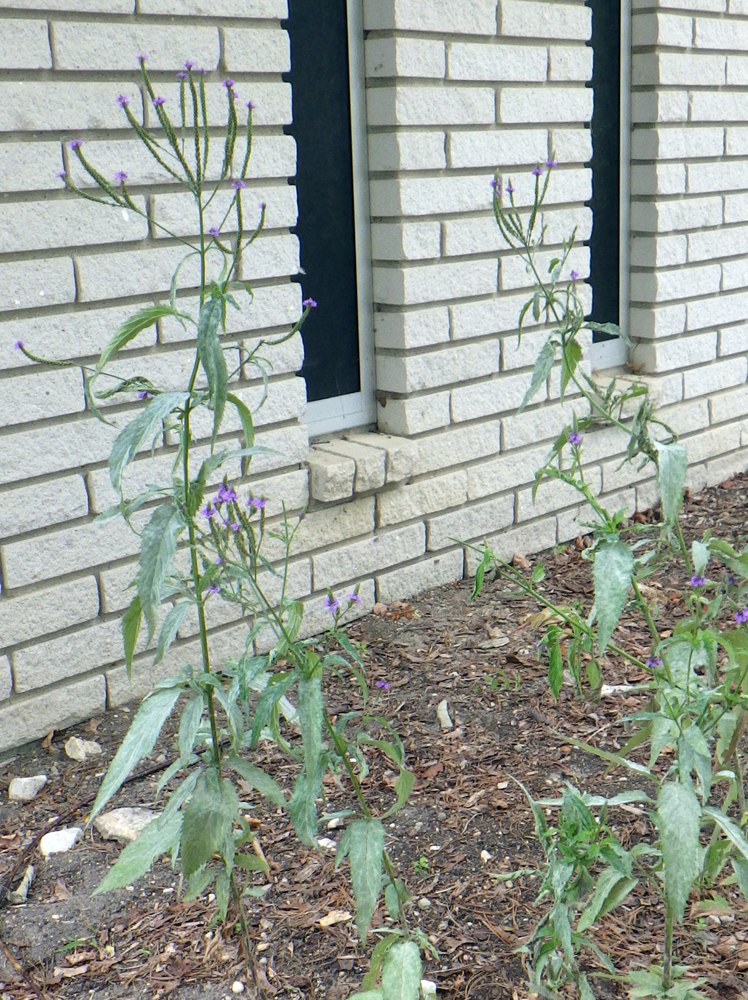 Those in the full shade are thin, less floriferous, and beset with mildew. 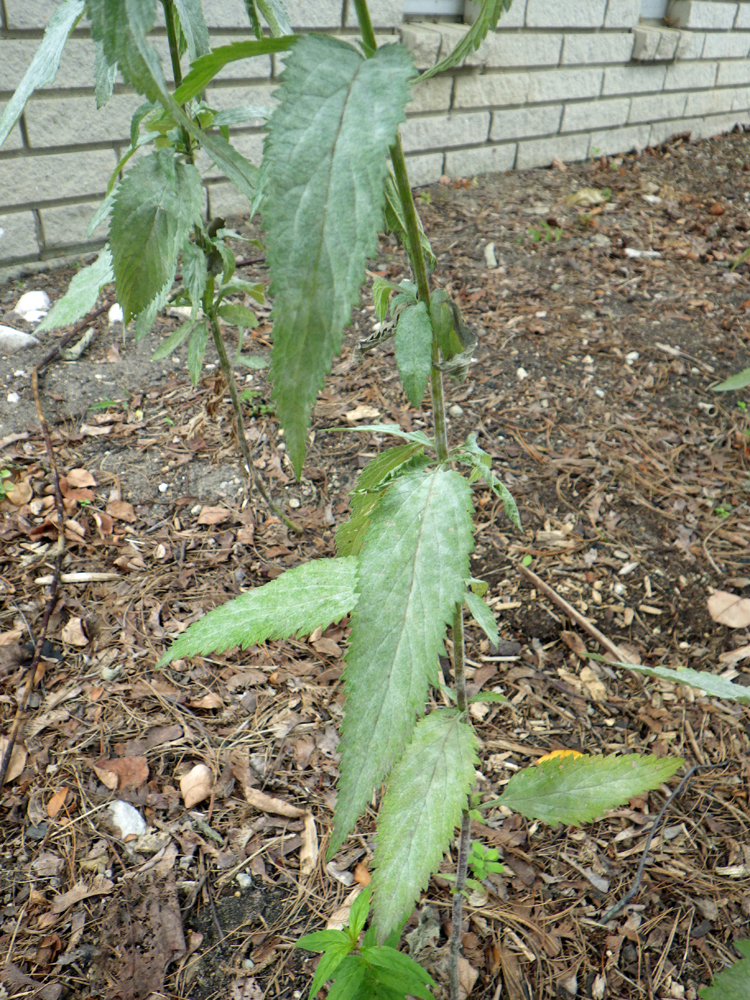 (Why leave them to grow where they should not be? We have not yet gotten around to planting those areas and the native bees love the vervain.)

Sickly for years? Give it up already! 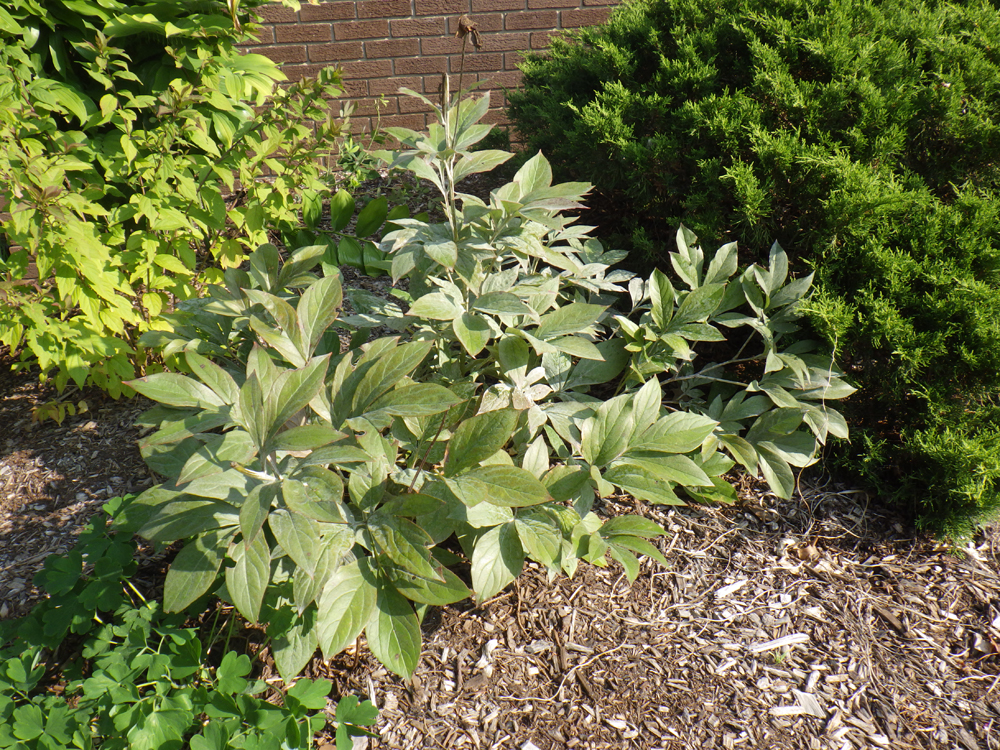 Our son and daughter-in-law bought a house and garden that included this peony. It has a beautiful flower. 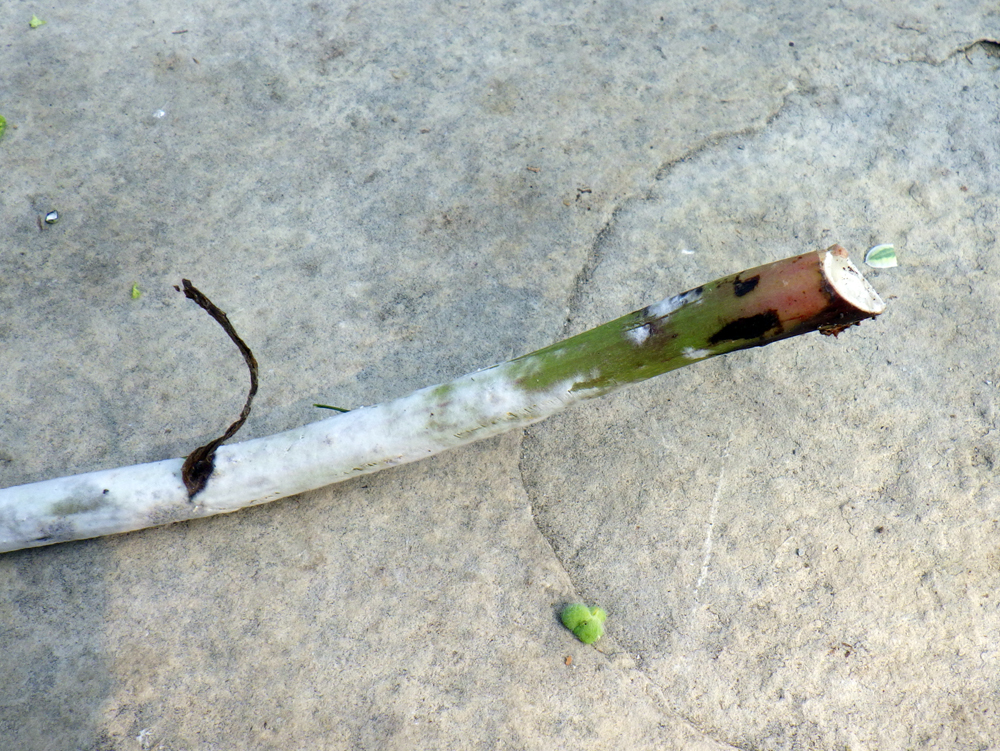 It also has always had some mildew. This year, it’s as gray as a powdered sugar confection. 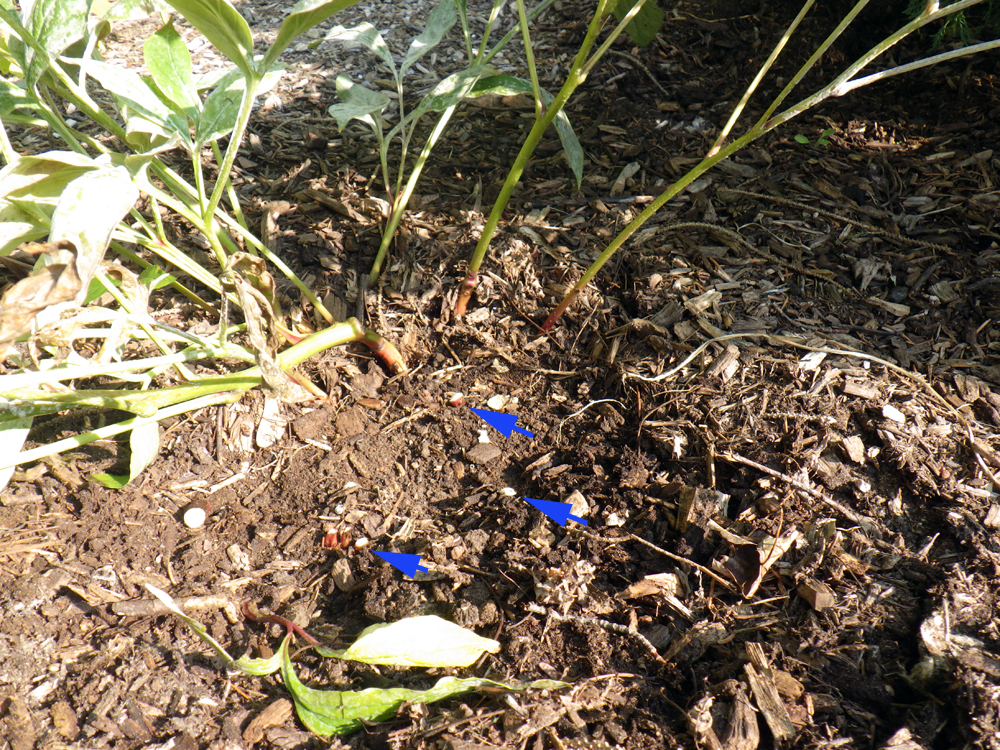 We’ve cut it out of the picture now – clipped it right down to the ground. (Arrows mark some of the white stubs.) 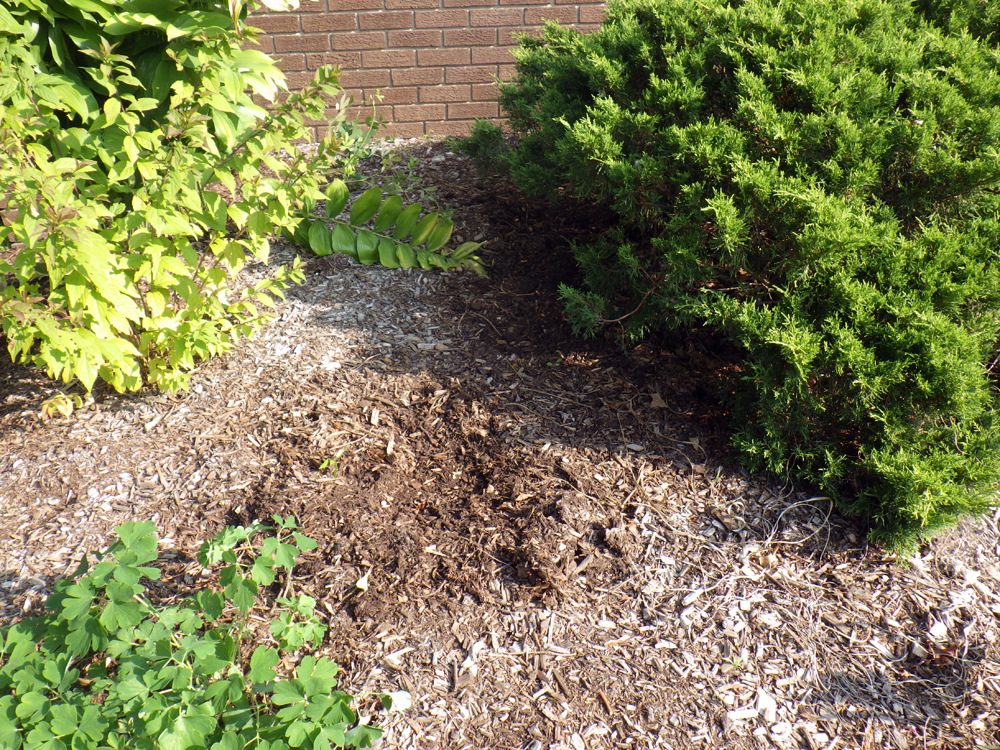 We think the time has come to take it out of the garden!