Tossing tender perennials, with an argh to perennials that aren't

To letting go of non-hardy plants at the end of the season.
We don't want to sound like a broken record (is there a current, digital way to say that?) but we really wish more people would let plants grown as annuals die gracefully.

Sure, some are perennial in climates more moderate than your own. They have the potential to survive winter and grow again next year if stored just so or grown in just the right way through the dark months. Yet it's so easy to get carried away, and alienate your family by stuffing every cold closet in the house full of stored roots or cut-back potted plants...

(Okay, okay, if you must keep them, Search the site using the plant name and the term overwinter, such as Mandevilla overwinter or red fountain grass overwinter. You'll find help in What's Coming Up 7  and many other articles.) 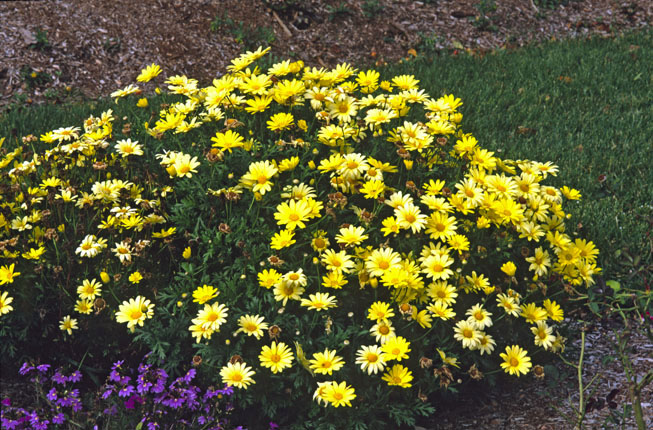 Perennial confusion puts the "argh" in argyranthemum. These plants bloom all summer -- just keep those spent daisies deadheaded -- yet the tag says "perennial." Sounds too good to believe, and unfortunately that's the case.

To perennials without zones listed: They're perennials-that-aren't

Last summer my wife and I bought some flowers and were told they were daisies. The tag called them Butterfly Argyranthemums and said they were perennial. I cannot find any other info on these flowers.

I would like to know if they are annuals or perennials. If they are perennials we did something wrong because in spring the main stems were all dried up like a mum but they never came back, which is too bad because they bloomed beautifully all summer. We bought more. What should we do differently this year? Do they reseed themselves or sprout new foliage from the roots? - D.D., zone 5 or maybe 6 -

Yellow Argyranthemum brightens the doorway here, keeping company with another perennial-that-isn't, purple fountain grass (Pennisetum setaceum 'Rubrum'). Both are perennial in the far southern warmest zones in North America, but are grown as annuals everywhere else.

Argyranthemum frutescens exemplifies all the ways a plant can suffer an identity crisis. Commonly called Paris daisy or white marguerite, it's not French and not always white. A native of the Canary Islands off the coast of Spain, it may be white, pink or yellow. It has also been subject to several controversial changes in scientific name, which is why you may not find it in books and catalogs under "Argyranthemum" but under one of its former names, Chrysanthemum frutescens or Anthemis frutescens.
Although it's weathered name changes and ambiguity, it can't weather a USDA hardiness zone 5 winter. It's a sun-lover and a cold-hater, perennial only in zone 9 and warmer. Both plant and seed die at the first hard frost. To have its season-long bloom on sturdy stems in the Great Lakes, you'll have to buy new each year or haul the plant into a cool conservatory for the winter.

A plant that lives for more than two years is a perennial, but not all perennials can tolerate cold. So a plant that's perennial in the subtropical zone 9 or 10 may be unable to survive outdoors year-round in the U.S. Midwest, hardiness zone 4, 5 or 6.  Such a plant is generally grown as an annual in cold climates -- pulled out at year end or allowed to die -- or grown outdoors in summer then overwintered indoors as a pot plant or dormant root.

So, there are plants that can be outdoor perennials in zone 9 Florida, zone 8 Gulf Coast States, the desert southwest or southern California that are "annuals" in the U.S. midwest, Northeast or Canada. Many are produced and distributed by national companies. If you bought the plant from a national chain with one-fits-all labels or a local garden center wasn't paying close attention when selecting labels, you might be misled.

If you've been fooled by others, or seen friends, fooled, post it where we're growing this list on the Forum. We'll compile the input and update this article's list.