We thaw a chance to prune, so we did

Mid January: Green thumbs up to a thaw

Arctic cold has just withdrawn, replaced by rain. The clouds pulled up high and things dried -- except for the snow banks, that is. Snow kept melting in all directions.

This is a winter thaw.

And this thaw is one of the type we want for winter pruning. That is:

Gasp - what have we done? Simply completed a pruning project begun two years ago. Read on to know why we have no fear.

This is all good because the raw ends of cut branches will have 24 hours or more to fill with protective resins before a freeze. In addition, trees such as maples, birches and beeches that tend to weep sap after being cut won't do that during winter when there are no leaves or swelling buds to draw water up from the roots. Even though sap dripping from branches is not a problem for the trees we gardeners hate to see our trees "crying."

Also, the gardener will enjoy being out! We wear thermal underwear, a vest and a coat and quickly shed the coat. We're not alone. In yards all around, people are out removing holiday lights and lawn ornaments.

So today was a good day to prune. Tomorrow will be, too. We'll watch for similar thaws, which often come in late January, late February and early March.

We pruned a Japanese maple (Acer palmatum) today. (What else could we prune?) It was our third step in two years in a shape-up and reduction project.

The tree had become too wide and tall -- it blocked access along the walks and hid rather than decorated the house. Yet the owners loved the tree's beauty.

We proposed a gradual cut back:

An important note: It would have been ideal to begin pruning when this tree first reached half its current size. (We've shown you how to do that restriction pruning in other articles, such as Afraid to cut Japanese maple. Here, we're dealing with reduction pruning.) We can't change history or human nature. What's done was done. Like most gardeners, they were at first unaware of the need to prune -- aren't Japanese maples supposed to stay small? -- and then reluctant and even afraid to cut. Thus the current options: Remove it or cut it hard.

This story began in late summer 30 months ago, when we said, "Sure, we'll help you cut it back." We have no photo of the tree then. (Sorry. We're real-life gardeners and don't always foresee what we should document for reporting.) However, you can see the initial size in this photo taken one year later, in August moments before we started pruning. The full spread of the tree is apparent, although its original density is not. 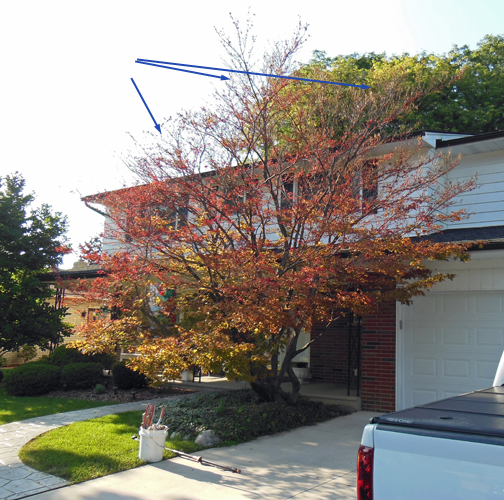 We'd planned to start pruning in April of that year but Ma Nature changed the game plan by cutting the tree back drastically in a late spring freeze, the worst in almost 20 years. The tree was completely defoliated and many branches high in the canopy died completely -- they were most exposed to wind. We looked at the tree that April and delayed starting the plan until we could see how well the tree might recover. Then we'd decide then how much would be safe to prune.

That took us to August, when we began pruning. The arrows (right) point out the most scantily clad upper branches, where branches as well as foliage died. All leaves there are growing back from shoots coming right from the main limbs. The tree's probably only 1/3 as dense as it should be, as it was a year ago.

We said, "Okay, we can prune but we'll go a bit easy." The tree had put much of its reserve starch into producing all new leaves and many new branches after the freeze. We didn't want to remove so much of that new foliage that the tree would have too little energy to grow back once more, this time from below our cuts. 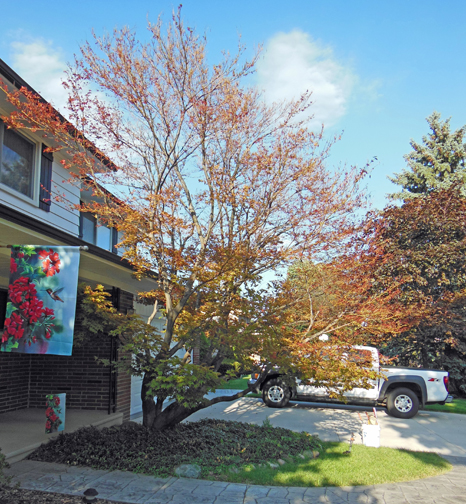 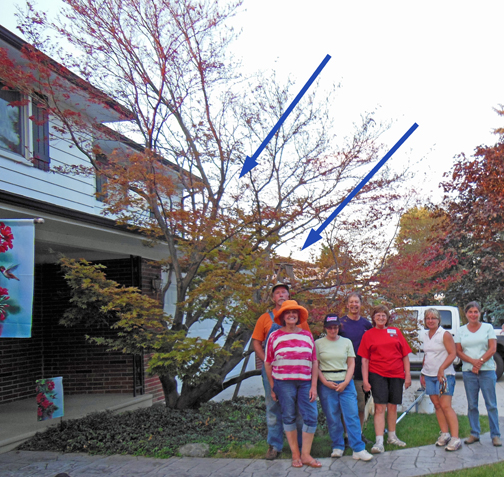 That day in August we decided on main limbs to keep, identifying main cuts to accomplish that. Then we cut some but not all of those limbs. Arrows, above right, mark the parts of the canopy where limbs have been removed -- compare the two pictures.

The people you see here came to Garden by Janet & Steven to learn how-to. They looked, questioned, debated and then cut some limbs and marked others to be cut next time. They were brave souls! (Left to right above: Cynthia Falska & husband, Terri Wolf, Nancy & Jim Ranieri, Diane Cotter and Virginia Bergin.)

The next step was to wait and see how the tree responded. If it developed strong new shoots from below the freeze damage and below our cuts, our next steps would be to work with those shoots as the start of our smaller new canopy and to cut out all the badly damaged limbs.

The next April, before the budbreak

We saw that the tree had managed to put out a good deal of new growth. The most vigorous shoots (thickest, longest) had sprouted from wood below the freeze line.

Our next-limbs-to-cut remained marked with rope nooses (right, inset photo). We decided to take out all the limbs we'd marked.

Here's the result. You may note the tree has not lost much height yet, only improved in shape while losing width and lower, walk-blocking limbs. However, note that much of its remaining height is an upper canopy dominated by dried, brown dead wood. We'll be cutting those limbs back by half in the next step. 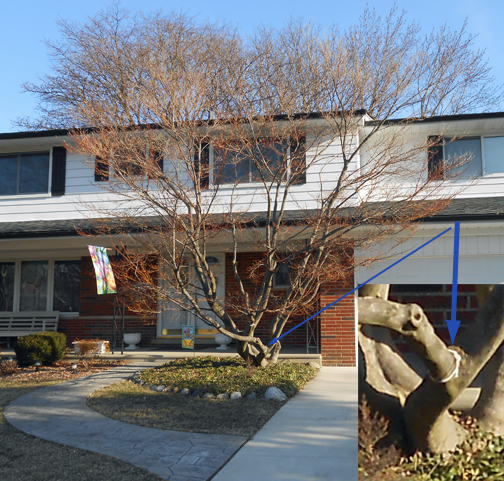 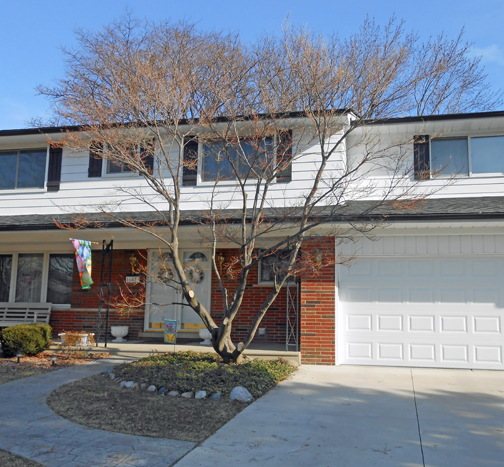 August, one year after the first cut

We see that the tree continues to grow well from below the freeze line. We had planned to cut more at this time. However, we decided to allow all the foliage to remain for the full growing season, even high up on limbs slated to come out and full of dead wood (photo below right, brown arrow). The sugars the foliage would make would help the tree renew the starch reserves it had used to come back from the freeze and the first hard cut. 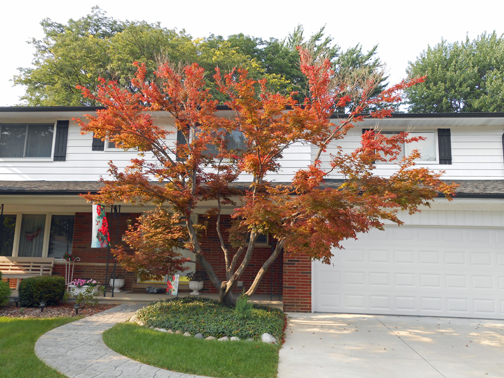 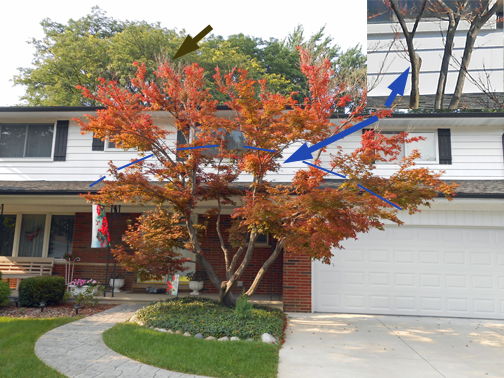 Above, left, what we saw a year after the first cuts. Above, right, what went through our minds. We noted the density of new shoots coming from below the freeze line (blue arrows compare a section of trunk in April and August). That freeze line (dashed line) is going to be our new ultimate height for the tree. Not only will it be in proportion to the house and no longer block the door, but it will be less likely to be damaged in future freezes.

We took out all the freeze damaged limbs. This is the pruning we would have spread over a couple of years if the original time line had remained valid. Now there was no reason to wait, as our cuts simply finished what nature started. We removed wood that was mostly dead twigs supporting weak new growth. In effect, Ma Nature's freeze led to our cutting the tree back further, sooner.

Right: Here it is, before and after our most recent cuts.

It looks bare, we know. Yet based on what we've seen since the freeze we expect it will leaf out very well from existing buds and push out a lot of new growth this coming spring. And the owners will never do what we also avoid: Pruning from a ladder!

We'll post a photo to show you what happens and what comes next. We expect the tree will grow as just stated, which will signal the start of every-two-year pruning to restrict the growth (shown most graphically in What's Coming Up 29.). If something different happens, you'll see it when we do. We'll post the developments here along with our revised plan. 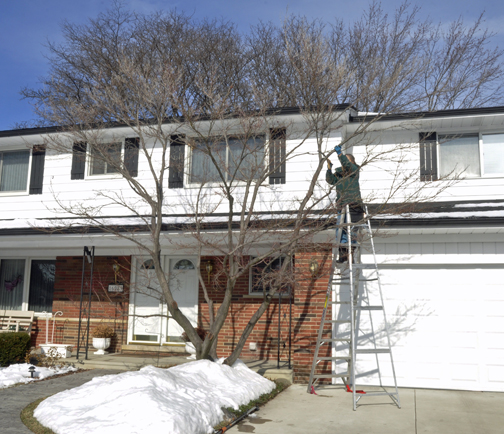 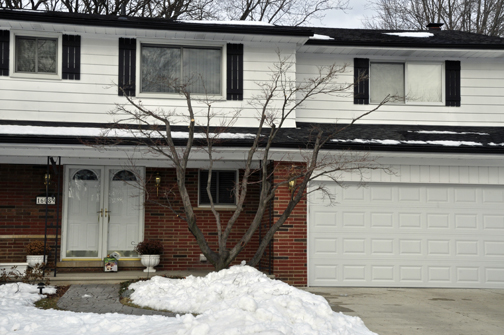 Much to cut in winter thaws

What else might you prune during a winter thaw? Fruit trees of all kinds, young shade trees, oaks that can't be cut during insect-active season for fear of inviting into pruning wounds the insect-borne fungal diseases called sudden oak death and oak wilt, and shrubs due for hard cut-back.