Sometimes we cut even when it's the "wrong" time

Budbreak usually calls a halt to pruning because cutting then can net a lot of wild new growth.

However, in an unusual year when spring starts early and our late winter/early spring cuts aren't done, we often break this rule (list of plants we've cut in bud). 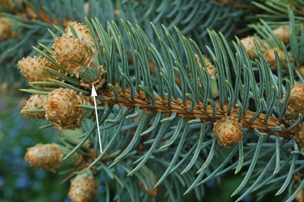 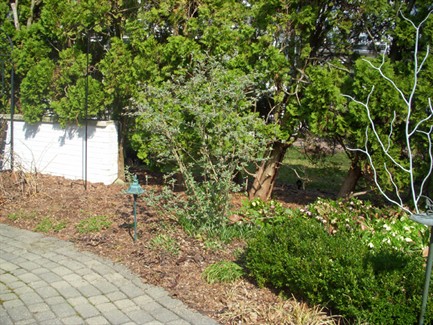 Look where the arrow points and you'll see the bud cap has lifted off that bud. The bud began growing and has pushed off its winter cover. Each species has its own time to break bud. For this plant (Colorado spruce) in our region, budbreak usually comes in early April, about the time the saucer magnolia blooms.

The why's behind the rule and the transgression

Here's a little bit about why we usually halt, and what happens when we don't, so you can make your own decisions about putting away or carrying on with your pruners.

As the shoots that formed last fall fill with water and elongate, a powerful surge of growth follows and many strong chemicals are produced in that growing bud. The chemicals in those tiny buds -- we call them plant hormones -- will direct the entire plant's energy into new shoots. The uppermost and outermost buds commandeer the lion's share of energy and suppress the growth of buds lower on their branch. This keeps the plant growing up and out in an orderly fashion.

If we come along and cut off the tip buds after they begin growing, the order that's just been established is scrambled. Buds below the tip that "thought" they were subordinate are suddenly released from control. They don't grow evenly, but sprint and compete with one another. Dormant buds the plant was holding in reserve may begin growing, too. The result is bushiness and some uneven or unexpected growth.

This may be fine if you're growing a hedge or you don't mind coming back to prune again to sort out the craziness. Yet you can lose ground on long term projects if it's a tree you've been shaping.

You will probably have to revisit any plant you cut during its first flush of growth, to cut off uneven growth and thin out places where multiple shoots developed instead of the one you wanted. Do this after the new shoots have begun to harden.

If you don't want a lot of new shoots to form because your intent is to shape and limit growth, don't prune during budbreak and shoot elongation.

Shoot elongation. In a conifer it's also called "candling." Clipping the candles can shorten the year's growth but does not stop the increase in height and width. To restrict an evergreen's growth, see the pruning done in Reduce a Spruce and Dwarf Cut to Size: Blue globe spruce. 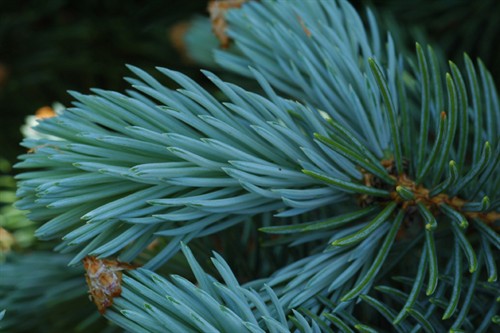 What do we cut when we break the rule?

Spring came 'way early for us this year, catching us with late winter's work incomplete. We've just cut plants listed below even though they'd already broken bud. We went ahead and cut because what we want from these plants is vigorous new canes and we'll still get that. We may see more branching than we think is ideal but chances are no one else will even notice. We may also have more, smaller flowers rather than fewer, larger flowers on fewer, stouter canes.

You won't hear us say, "Oh you poor butterfly bush!"

Please do cut that butterfly bush way down unless you want a hoary, tangled, earlier blooming, 10' monster in your garden. Don't be afraid to cut because "It's leafing out, and it kept all its leaves from last year." The presence of those leaves on mild days in winter allowed the plant to produce and stash even more starch than usual. Cut hard now, it'll come back like gangbusters. So go ahead and cut it to the ground for clean, new growth that will bloom in late summer when you will most appreciate the color.

Below: Thank you, fellow Detroit Zoo Adopt-a-Gardener Tom Theoret, for helping us demonstrate the proper attitude to take with a butterfly bush this time of year! 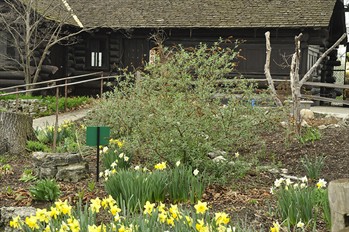 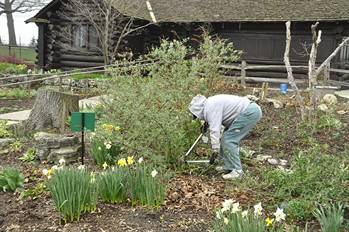 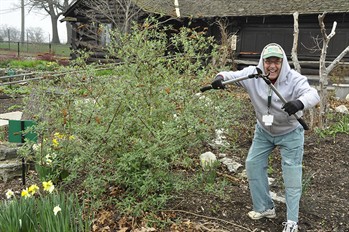 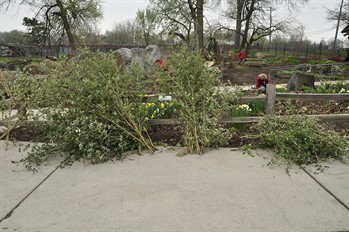 Tom stacked all the cuttings where we could use them to weave into a wattle fence.

Now isn't that more fun than the way we originally tried to capture "What to do with a butterfly bush? (Below.) Which amounted to nothing more than a photo with, then a photo without... 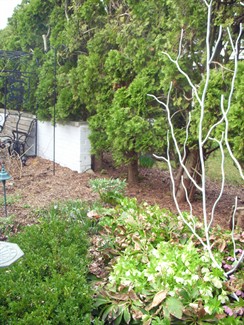