Because frost damaged Japanese maples and so many other trees in spring 2012...

Many important trees all over the Eastern U.S. and Canada were damaged in the precocious spring and unfortunate frosts of 2012. The toll included many thousands of Japanese maples. We dedicated much of What's Coming Up 179 and all of What's Coming Up 181 to the situation.

Here are updates as they occur. 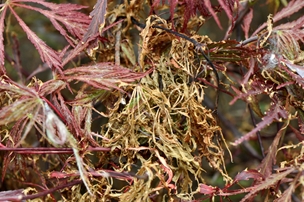 March 21: Many trees and shrubs leaf out 3-5 weeks ahead of normal.

March 25: A frost brings to an end one of the earliest and longest saucer magnolia bloom periods the Great Lakes region has ever seen. Blossoms are killed. Some foliage is damaged but most is spared, having been still tight in bud. To the untutored eye, it's a matter for great concern since the trees look so brown from all the clinging dead petals.

April 21 - 28: A series of normal frosts catches many trees, shrubs and perennials in full leaf. The earliest frosts are overlooked by many. A freeze on April 28-29 is more noticeable, as it kills all or much of the foliage on many Japanese maples (and other trees and shrubs, list below).

April 29 - May 3: Questions flood all horticultural centers. The answer is consistent among the experts: Wait for new growth to develop and assess the toll at that time. However, many people are not tuned in: Many Japanese maples and other well established trees are being cut down or removed as "dead."

May 3: What's Coming Up 179 reports the situation, advises patience and provides the detail, "You will see new growth in 3 to 4 weeks.

May 30: What's Coming Up 182 reports additional new growth is still appearing on bare wood, advises hold off on pruning.

July 27: To cut boldly: Upcoming subjects reports that some of these trees made such poor recovery that they should not be pruned this summer even if the schedule says this is their year to be pruned to stay small.

Other trees and shrubs that were damaged.

Japanese maples command so much attention that most people took quick notice of their frost damage. Other trees were out of sight overhead, nipped earlier in leaf development, or otherwise escaped attention. Any of these plants may develop weakness or branch dieback later in the year, which may have its basis in the frost damage.

Many perennial plants were damaged by March and April frosts. Some of those most mourned, most unusual, or which may have been damaged in ways that a gardener may not associate with frost:

Hosta. Crowns as well as leaves may be damaged. Summer dieback and blight of damaged tissues may be in store.

Bergenia, English ivy and Ajuga: Crowns damaged, foliage emerging with deformities. Crowns may continue to deteriorate and die back during summer heat or next winter.