Impatiens downy mildew is terrible, and dealing with it means losing more than the plants and their show. Here's a frightening, true story meant not to scare but to make two points. One, if you're a professional gardener, or you ever carry tools or plants to friends' gardens or places where you volunteer, start viewing impatiens as hazardous material. Think ahead if you touch them so you can limit the contact, and clean up before you touch anything else. Two, think again if you view your garden as safe because you have not seen the disease that is devastating impatiens all over the eastern part of the continent. We hope you will know, after reading this, how easily and innocently everyone from a mail carrier to a songbird is spreading it.

Your Sponsorship welcome and sorely needed! 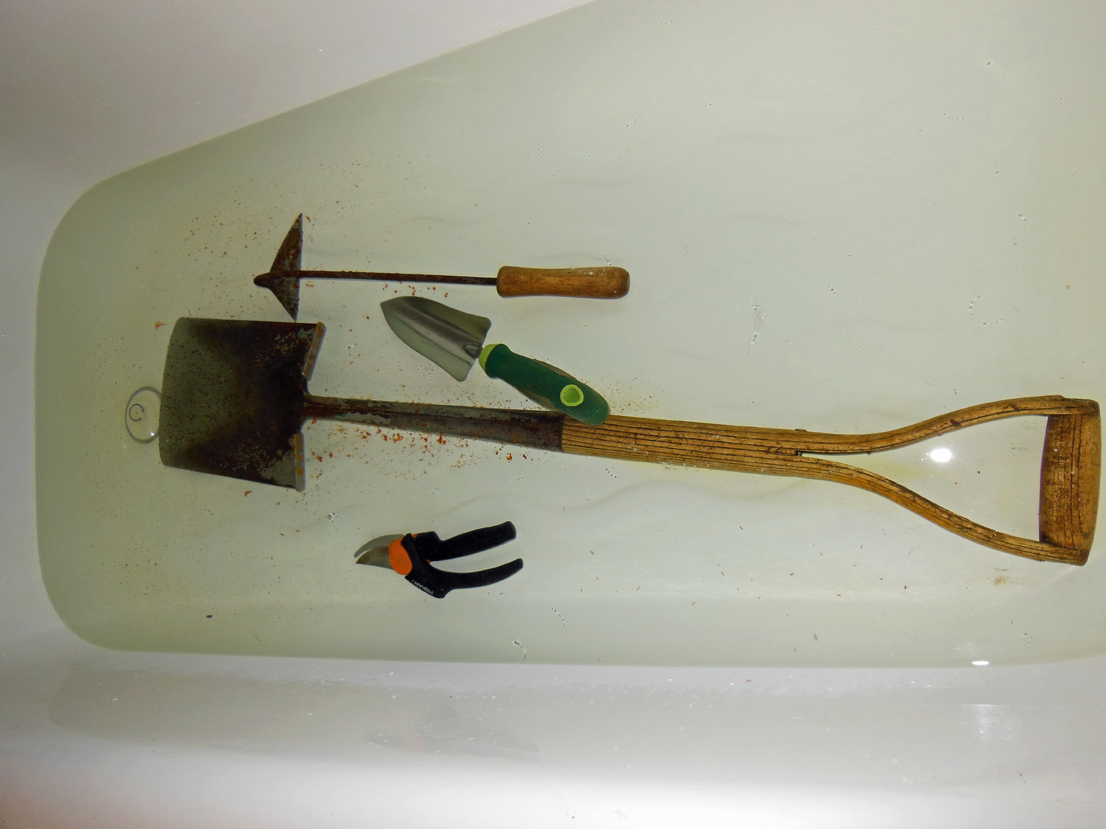 Above: What's going on here? If you can guess, you're smarter than we were!

Janet arrived at a garden to find the impatiens had succumbed to downy mildew. That was disappointing but no surprised -- we've been looking for it every day, and hearing from others how suddenly it can appear. It was no comfort to know that we planted clean plants (remnants from the flats purchased for this garden went into the ground elsewhere and continue healthy), but it was proof of how easily this disease can spread.

Below: Impatiens downy mildew is spreading quickly across North America, and this story explains why so many growers and professional gardeners think it's pretty much unstoppable. 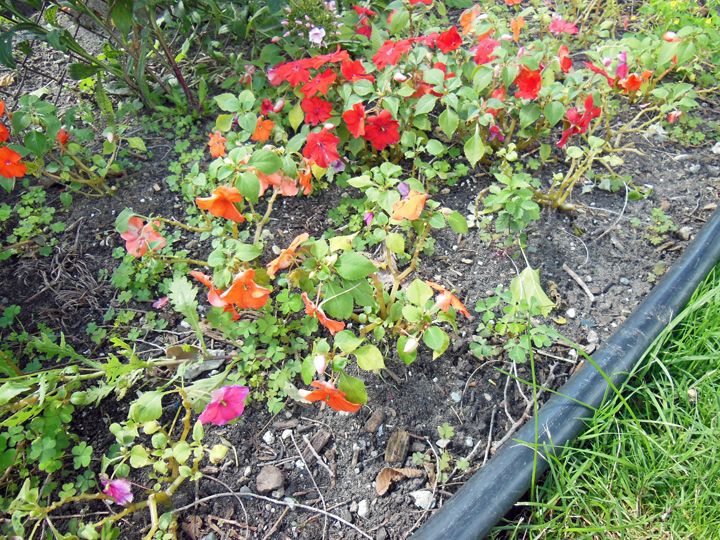 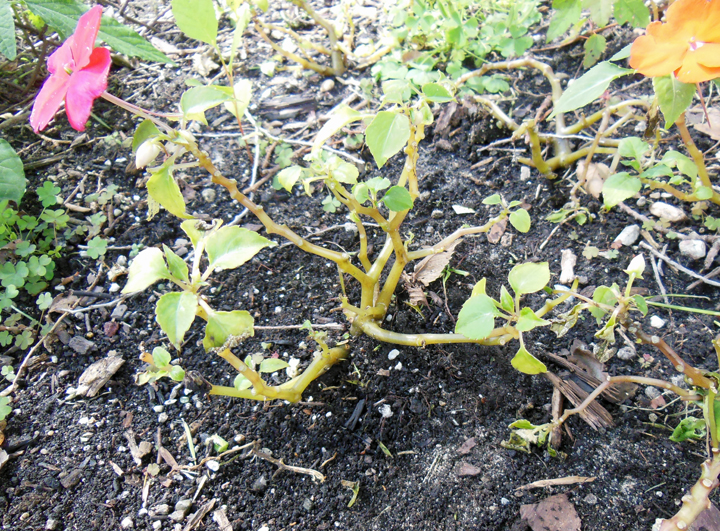 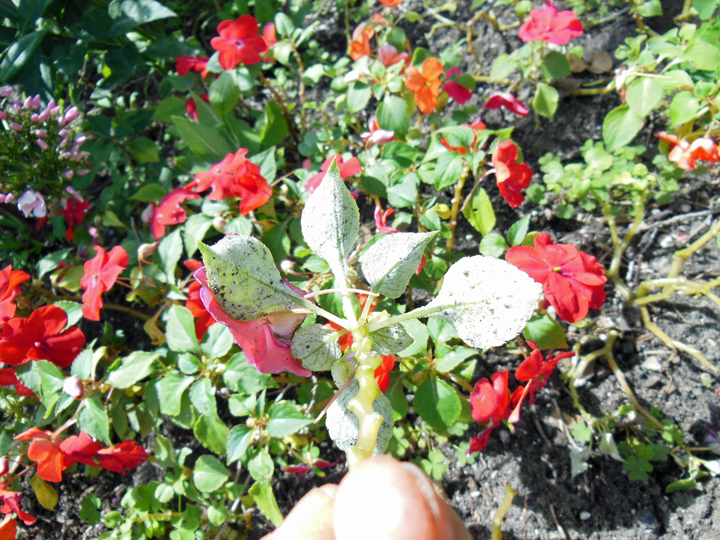 Above: It's a species that can look skimpy for other reasons but when we turn over a leaf and see downy white, we cross impatiens off the list for that garden.

Resigned to the unexpected job, Janet dug in to get rid of the plants. Almost an hour went by before she realized what hadn't occurred to us before. She looked at what she was digging and bagging, considered herself and saw she had become a vector of the first order.

Her gloves were full of spores yet she'd gone to the tool bucket for additional tools -- how many and which things did she touch?! Spores had fallen from the plants and drifted all over, including on and in the wheelbarrow. Her boots, including the upper surfaces, must be covered in spores. She'd also touched her clothes, eyeglasses, camera, phone...

Below: Looking into the tool bucket she wondered, "How many things did I touch, here?" But it didn't matter -- spores would have fallen onto everything.

She was scheduled to work in another garden that day, but had to cancel, since first she had to decontaminate before going anywhere.... even home. (Ironically, we had a misery-loves company talk with Michigan State University plant pathologist Dennis Fulbright just weeks ago, after he remarked, "I inadvertently bring home everything bad I work on!")

Two hours later, Janet arrived home wearing new clothes, with tools and work clothes sealed in plastic and the wheelbarrow wrapped in a plastic tarp. She'd had to buy the clothes, plastic bags and disposable tarp, plus enough bleach to make a 10% bleach solution in the bathtub -- the only place we could soak large wooden-handled tools for the recommended 30 minutes. Her choice in stores had been based on not having to park or walk anywhere except across vegetation-free pavement.

"I don't know, Steven," she said glumly. "I tried to drop my work clothes and boots straight into the plastic bags but the changing room in the store really ought to be disinfected now."

Right: All the tools and the tool bucket went into the tub for 30 minutes in a tub filled with 9 parts water, 1 part bleach. Boots... thank goodness they're due for replacement because being scrubbed with bleach water is not going to add to their life.

It took three hours to get everything soaked in or wiped down with bleach solution. Fortunately, the metal handle wheelbarrow was involved, not the one with wooden handles. Drat that the new boots we hate to break in mid-season are probably now a necessity.

We are trying not to think about all that time plus a half day's work lost, and the total money spent. We're thinking, "Maybe we can spare someone else this mess!" 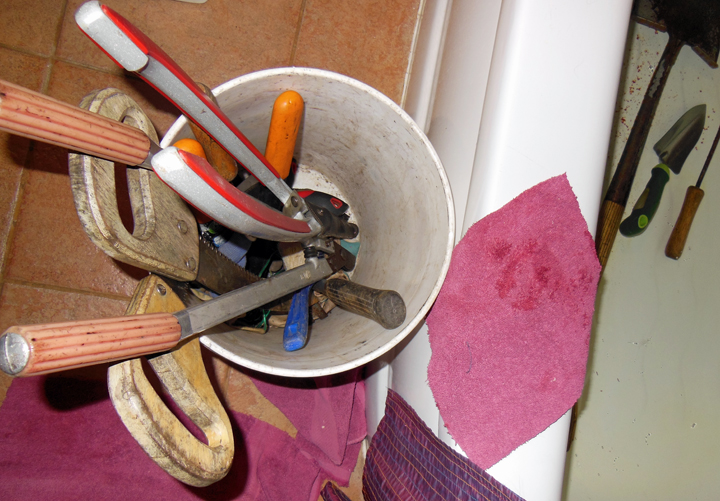 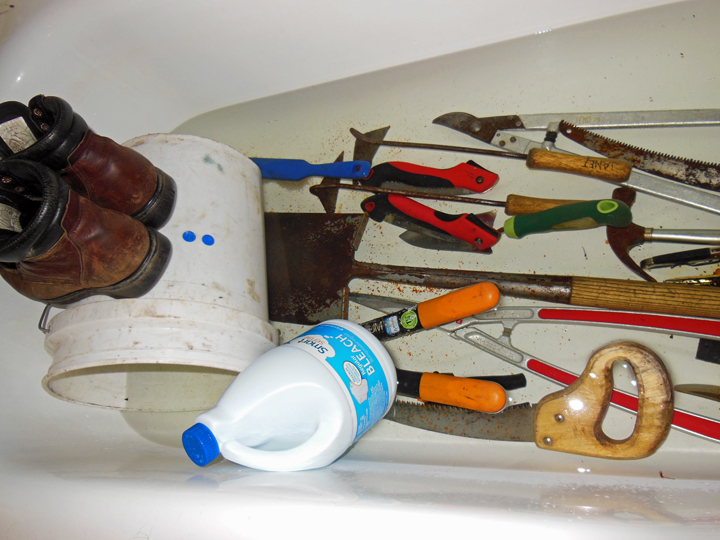 Sponsors donate to help us keep writing,
and many say "Put my message on such
and such page which is helpful."
Would  you recommend others read this? 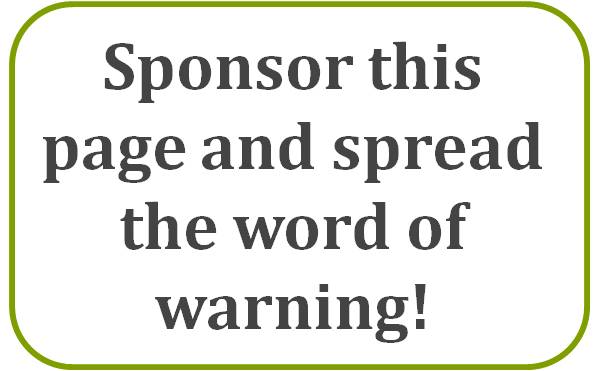