No more impatiens? The impossible is upon us.

Our email's loaded with it:

This year (our impatiens) started off beautifully but now look like they have been eaten. The leaves and blossoms are gone leaving just the stems. We water on a very regular schedule and have never had this problem before... Can you tell if this is from a fungus or an insect/animal? Please help and let us know if they can be saved and what we can do to avoid this next year. Thanks!  - J.H. -

Some beds of impatiens I have planted are in serious decline. They have been exposed to the hot sun probably more this summer than others and the irrigation doesn't seem to be able to keep up. Is it perhaps the heat of this summer, or do I have a possible blight situation? - J.G. - 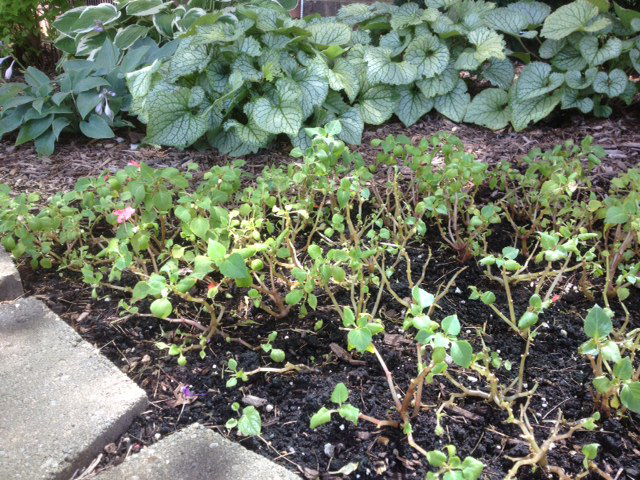 A devastating disease of impatiens has come to North America, and these plants may be victims. MAY be! They may also be some of the many we've seen (of this species and others, too) that were well watered yet just plain unable to take up enough moisture fast enough to replace what terrible heat and drought were taking away. Here's some help in recognizing and dealing with the disease and also building resistance to the next drought or plague.

Most of the time we are optimists

always able to see a silver lining. If it will ruin your day to see us in a different stance, then pass by this article. We urge you to bear up, however, in order to consider a problem that does or will affect you, and a reasonable response that's not being adequately aired.

The gist of this:

• Welcome to the future of gardening
• How the disease spread
• No one is to blame
• Unstoppable invaders
• Not doom and gloom. How we'll beat it.
• Avoiding divisiveness; we need to join forces
• We'll all keep growing
• Skip to how to know it and control it, or links and more help from other sources such as Michigan State University bulletins (right)

in gardens and greenhouses all over eastern North America. In the last few years the problem has spread from one State to 25 despite attempts to stop it. So sad. These plants have been among the most reliable plants in the flower garden during the last 30 years but they may become a rarity in the landscape because of a virulent disease called downy mildew. 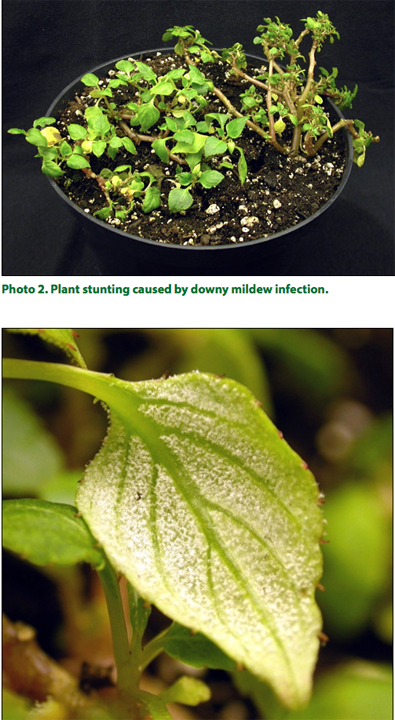 If it's already in your garden, learn about the disease to avoid more failure next year. This year, plant something different -- it's not too late!

If you haven't seen it yet, learn how to keep things that way.

Welcome to the future of gardening,

where we lose big because we've grown big. Before we lose you, be assured we think we gardeners will rebound in a big way, too. Stick with us for a few paragraphs as we explain.

The quick, steady, global exchange of goods unique to our era is stirring what was once a very slow simmering pot. We are spreading microorganisms between regions and continents at a terrifying rate. At the same time, homogenization of the landscape and centralization of plant production have provided disease organisms with great opportunities to settle in and spread. 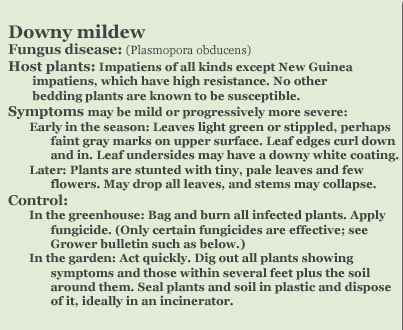 How did the disease get here?

For decades, impatiens have been so reliable in so many situations that more of them have been planted than almost all other annuals combined. Many have been grown in less than perfect conditions, and stressed plants are weak plants, primed to contract diseases and harbor insect pests. So a truck tire that rolled over infected plants in a sadsack parking lot bed near a port where spores wafted in from a contaminated shipping container will carry the spores to similarly susceptible plants in other miserable growing places, all along its route. 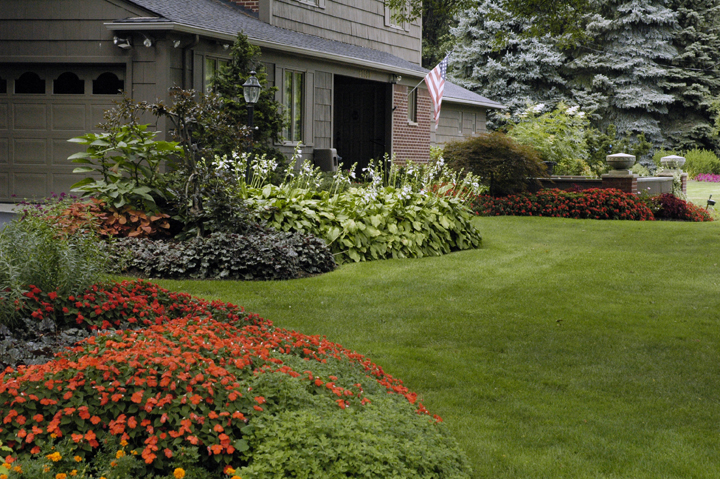 That said, please don't conclude that we are blaming the shippers. There are a thousand thousand routes these tiny fungal invaders take, including the feet of vacationing gardeners, tools inadvertently tainted, beds infected by spores from birds' feet. In a mess such as this, fault should not even be the issue. The truth is that because everyone's involved and none of us are going to give up our easy access to the huge range of plants the big system affords, it's no one's fault.

And everyone is suffering this loss. Growers are no less taken aback by their reliable crop's failure than you are by the miserable show the plants put on in your prime hanging baskets. Perhaps some growers are less surprised, having been to conferences where plant pathologists reported the first sightings. Yet even if alarm bells have been sounding louder since then (2004), it's one noise in a din as many similar alarms are ringing. We believe the professional growers are doing all they can in a difficult situation and the best we can hope for is that savvy gardeners and smart growers will slow the spread while hybridizers work on alternate species and resistant varieties -- perhaps from crosses between the standard, susceptible impatiens and their resistant cousins, the New Guinea impatiens.

"They should have known," you may say, "and not sold those to me." In some cases, maybe so. However, infection can happen all along a network where massive greenhouses are cross linked to sales points in a dozen States. In addition, the most efficient retailers may not even have the plants in stock long enough to see symptoms develop.

Certainly some must have seen, though. A few of those who were informed as well as lucky put all the clues together quickly enough to deflect that bit of the invasion. Yet even as we admire those efforts, we think they may be no more effective than those of an individual who can swat just one storm-driven locust at a time from a swarm coming in on a tornado.

The tornado is us, voracious consumers entwined with the grower-, shipper- seller network that developed to serve us. The locusts are emerald ash borer, downy mildew, lily leaf beetle, oak wilt and hundreds of other organisms that could never, in another economy, have crossed oceans and diverse environments to find homes away from home so primed to accept and breed them.

NOT doom and gloom. How our gardening community will beat this!

We are not predicting doom, only observing the reality of change in this maelstrom. The fungus that causes downy mildew has already swept through Europe, where impatiens are simply no longer a player in the landscape. And yet: Gardens still exist there! Now the disease is here (and was almost certainly here long before the first official sightings) and it's our turn to adapt.

Are we at least as good as a fungus at adaptation? Can we plant different plants? Can we diversify our beds? Can we stop planting the same thing in the same place year after year? All of that will help. It will not only make some small openings where impatiens may still sometimes appear, but it will improve the garden's health overall so it can resist the spread of the next invader.
And have no doubt, it will come. 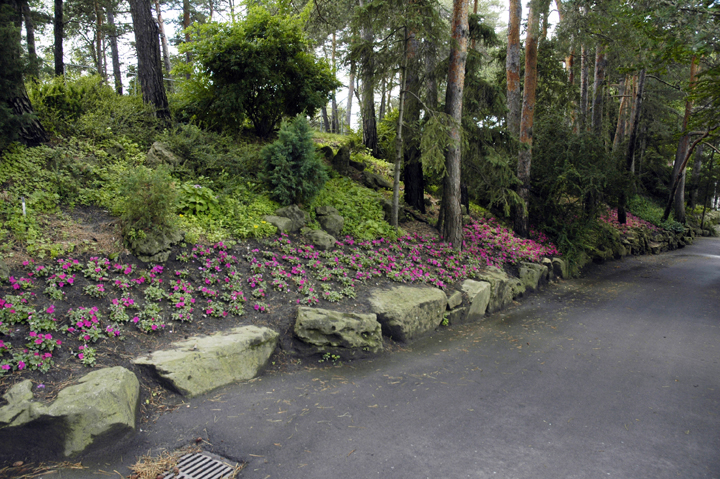 Above, right: Botanical gardens must come to grips and find alternatives, too. We are glad to have their lead to follow. We'll be watching what these pros plant where once they spread great swaths of Impatiens.

Avoid divisiveness - it's time to work together

One last thing. Please view people who supply us with plants as comrades in arms. One reason we continue to garden professionally even though it's physically hard, relatively low paid work, is because we love this field and the people in it. That sentiment unites most of the many professionals we know, from gardener to international grower.

The vast majority of people we know who sell plants not only want to continue working with you but honestly like their clientele as fellow plant lovers. Many are giving refunds for impatiens, breaking all custom and taking a significant loss even though they know they did all they could. Yet we've seen astonished sadness in many of their faces recently as they told us that honest commiseration plus store credit or a refund was met with vitriol.

They're on your side so take advantage of that. There is no absolute defense but good growers and garden center managers are inspecting all their plants for symptoms. They can help you see what to look for, so if the disease makes an appearance in your garden you can snuff it quickly.

...there simply is no other future for a gardener. We hope we can be smart, continue to smile, and come out ahead together, even in this strange new, impatiens-poor world.

Links and more help from other sources 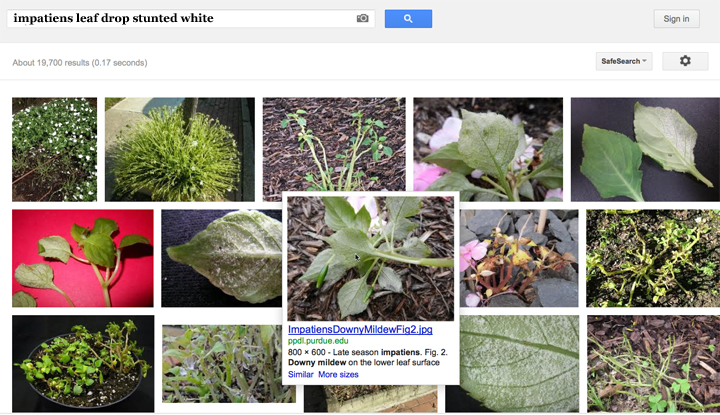 Above: See something odd on your plants and want an answer right now? The Internet offers a simple way to compare what you see to known problems. Set a search engine to "images" and type the plant species name plus one or more words that describe the symptoms. Then look for matches and start with the Extension bulletins (.edu and your State's college abbreviation in the URL is your cue) to get the straightest story.

Purdue University's bulletin includes the sad assurance that symptoms may not progress to the extremes shown in some advisories, yet still be becoming established in your garden. So remove even slightly symptomatic plants ASAP. 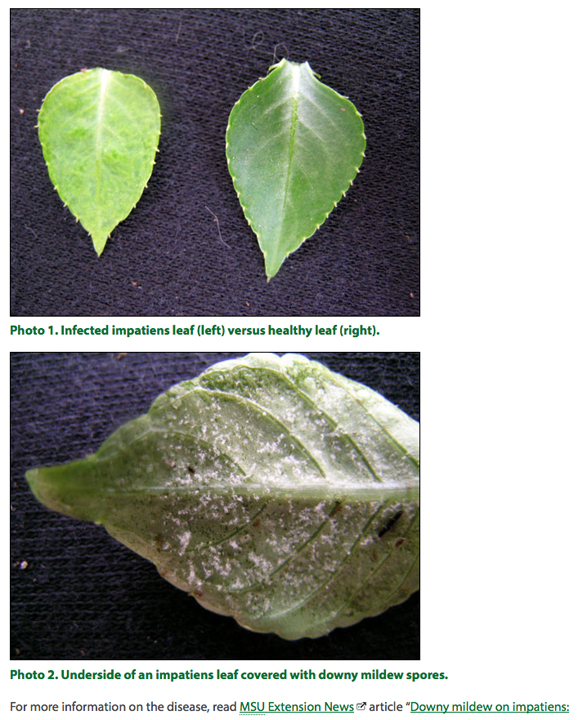 Click to comment or ask about impatiens downy mildew.
(This takes you to our Forum, where everyone can read but to post comments or questions, please click Become a Member at
the upper right on any Forum screen. Registering is free, simple
and solely to protect the site from hackers.)