...without ruining the garden

I was told recently that the reason my rhododendrons don't bloom is because we put lights on them for the holidays. They need total darkness, this person said.

If that's the case it would solve a long standing mystery but we're seriously doubting it. Lots of people in our neighborhood go all-out on lights, yet there are rhododendrons in bloom on our block every spring. We can't say for certain that the bushes we see bloom are the same ones that we see lit up but we think they are.

So what's the straight scoop? Okay to light the lights? - D.S. - 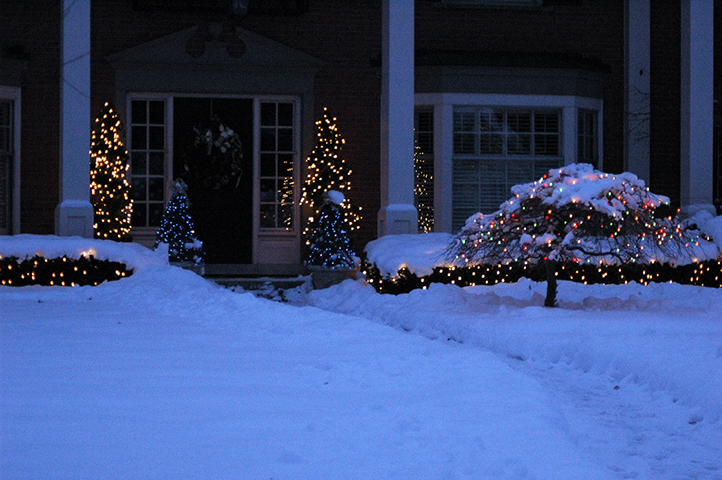 We love lights during the long dark winter nights. We also love our gardens. Don't let your love of one damage the other.

Does it affect shrubs' bloom, to bear holiday lights? Not in winter, when flower buds are already set to go for spring. But take care as you decorate to avoid physically damaging the plants or garden.

The decrease in day length as summer wanes does spur Rhododendrons to form their flower buds but they don't need such a long night as some species, including poinsettia and garden mum. They are also less sensitive to nighttime light during bud formation than some other plants. 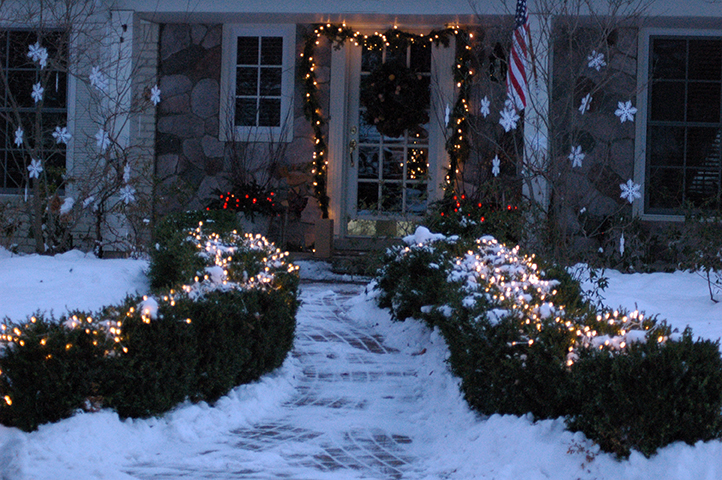 By winter, Rhododendron flower buds are set. Then the plant is indifferent to night lights. At that point, all it needs is cold (40F or below) for six weeks or more to finish flower development. 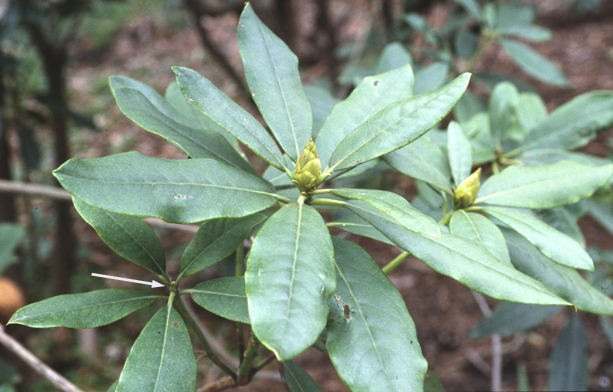 Once the big flower buds are set on a Rhododendron's branch tips, you can be pretty confident of the next spring's bloom. By the same token, it's too late by winter to coax flower buds to form on branches that set only small vegetative buds (arrow).

After that, those buds will open after being consistently warm for at least a few weeks. Early blooming rhodie varieties bloom 3 weeks into spring. Later varieties need more time.

When the plant resumes growth in spring, the big buds open into flowers while smaller buds become new shoots and leaves. Those new shoots will be ready to form their own flower buds later that summer for the next year's show.

It's light-ers, not lights, that pose potential trouble

When it comes to holiday lights, our worries revolve around broken branches, girdled trunks and ruined soil: 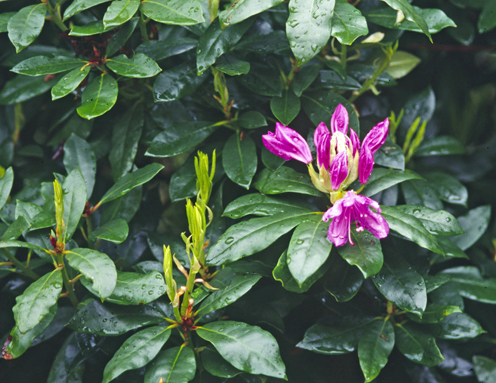 As pros at botanical gardens light the landscape, they follow the same watchwords. (Tips from Longwood's gardeners.)

Below: Do it, light those lights! But be aware:

These three trees are at risk for breakage, either when the extra weight of snowy or ice- crusted wires comes to bear on the thin branches, or when the de-lighting technician gets impatient in spring. 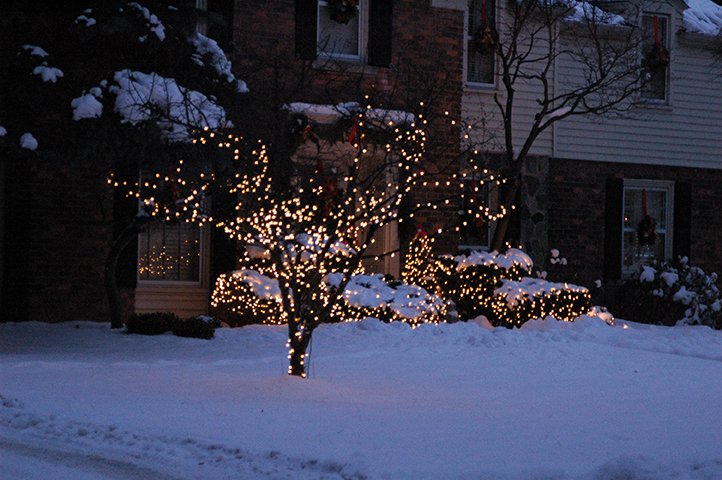 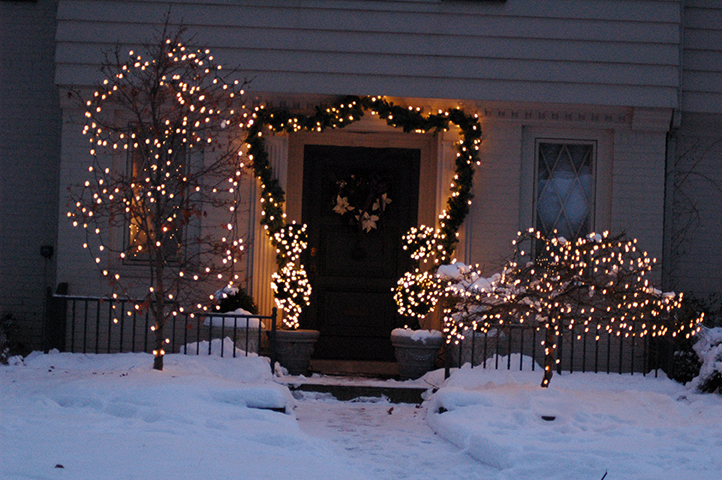 We love the look of a light-encrusted tree but see that the monumental task of wrapping all those lights leads many people to say, "Let's just leave them there until next year..." ...a leaving that sometimes goes on for years. Trunks and branches can increase significantly in girth each spring, and even a string wound tight around can girdle the limb, killing everything above the constriction. 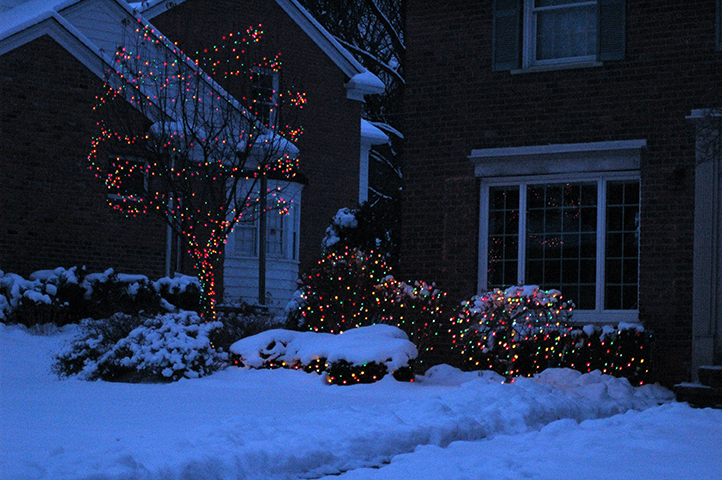 This tree is a likely candidate for damage due to its holiday decor. However, most people wouldn't know to link the tree's later decline to the lighting. Here's the connection: If the spruce is in a bed -- as it should be since its feeder roots are concentrated just outside the drip line and do not compete well with lawn grass -- then the wet, cold soil there can easily be trampled to root-killing airlessness by lots of circling and jumping up to poke lights into place.

Now, for things that can quash a Rhododendron show:

Why might you clip the branch tips? Some people do it to remove the visual mess of spent blooms. Do this or other pruning without qualm as long as it's done within about a month after the plant blooms. 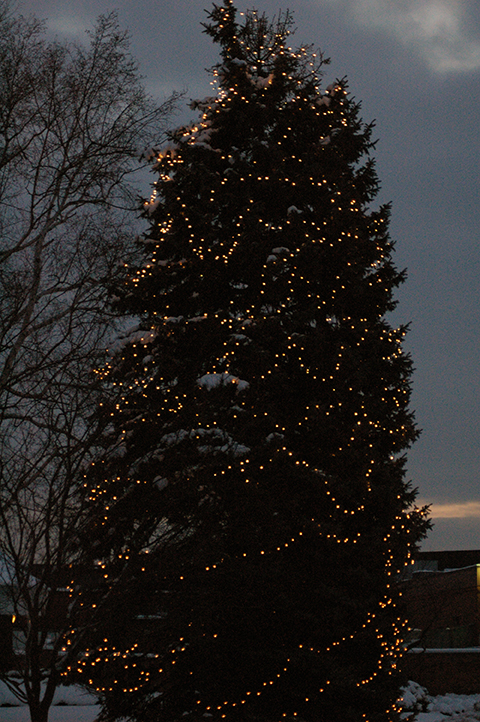 Here we're deadheading a Rhododendron in early July by snapping off (A) the individual spent flower parts. If we were short on time and didn't mind the tight-cropped look, we could shear the whole plant, removing spent blooms and new tips. Buds such as B, yet to open, still have plenty of time to grow, mature and set flower buds.

Notice that branches which did not bloom this spring commenced new shoot growth (C) sooner than the branch that was busy flowering. That's why branches that bloomed one year may not bloom as well the next -- they engage in "alternate year bloom" because new shoots get going too late. Early deadheading might even out the show on a plant that's stuck in an alternate-year bloom pattern.

More on pruning a Rhododendron in What's Coming Up #86. 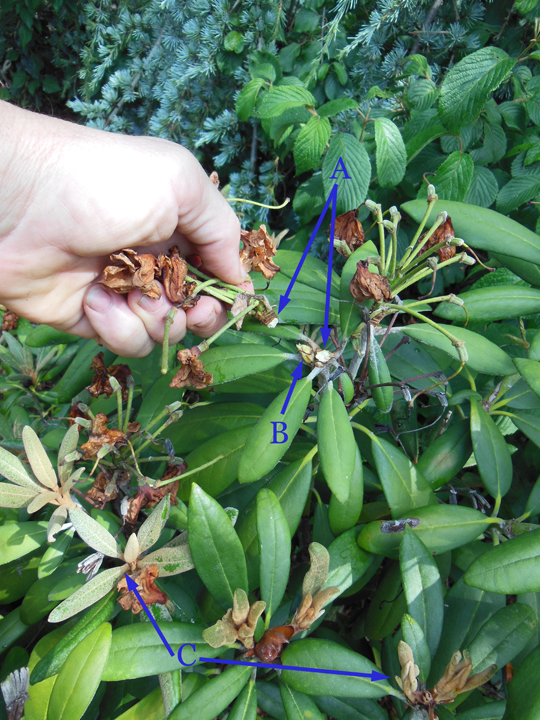 Sheared?! You bet, if that's the look you like.

For proof, just stroll a few traditionally maintained Japanese gardens to see azaleas flowering even though they are tightly sheared (azalea is simply the common name for various species of Rhododendron.)

You might take it to be boxwood, that undulating enclosure punctuated by Japanese maples. However, it's azaleas, at Portland, Oregon's lovely Japanese Garden. 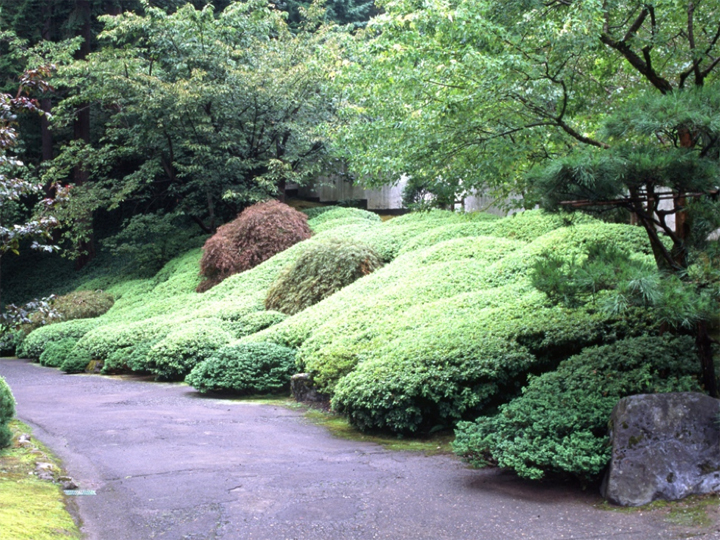 We can hear the wails from mid-continental gardeners who hesitate to clip even one branch, because these plants grow so reluctantly in their gardens. Yet in favorable environments they grow vigorously and can indeed be sheared and shaped.

What's favorable? How about on a slope where water's constantly trickling down toward the stream, in the moist air of Great Smoky Mountains National Park? Yup, that's a wild Rhododendron Janet's exclaiming over, putting to shame many a garden variety shrub that bears its genes.

And when we think about it, maybe it's a good thing they don't grow so large as they could, in front of our homes. Here, PJM Rhododendrons with serviceberry (Amelanchier canadensis). 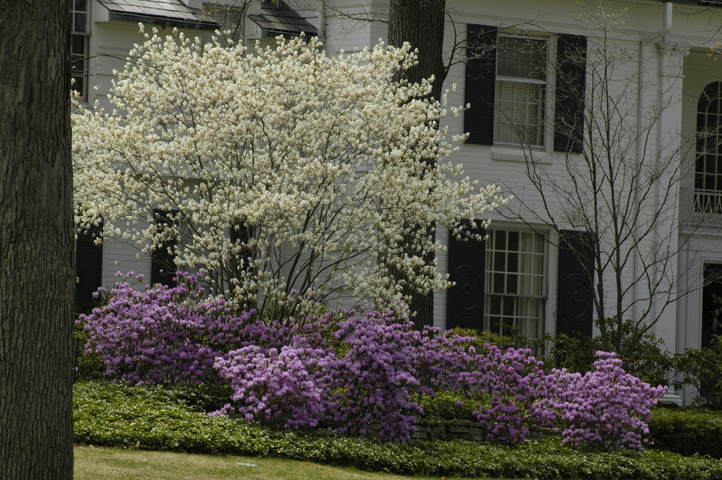 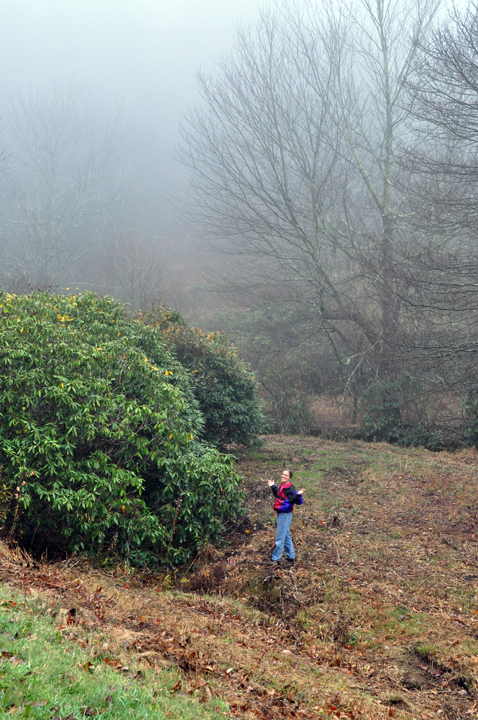 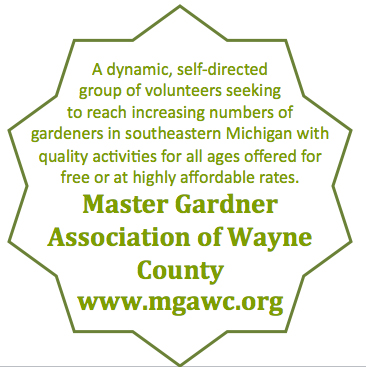 Always learning and sharing what they know to help others grow!