Like many vines we gardeners invite into our lives, passion flower vine is bigger than people expect.

This has (arguably) the most showy flower of the garden species and is one of the hardiest. It's also called wild passion flower vine, apricot vine and May apple vine.

However, it's only reliably hardy to zone 7. We've seen it as a perennial in zone 6 microclimates, where it's grown right at the foundation of an older home, a building that doesn't have the most modern insulation and so is warming the soil around it. There, it is a big vine, with limbs wrapping their tendrils around supports and sometimes reaching their potential of 20 feet. However, it doesn't bloom as fully as what we've seen in warmer places with longer growing season.

This species (native North American) is even hardier (zone 5) and the flower has the same intricate frill at its center, but the bloom is not as big and romantic as on other passion flowers. It has greenish white or ivory with perhaps some pink; overall less than half the size of maypop flowers.

This one has less frill to the petals but its blossom is twice the size of maypop's, slightly fragrant and its central petals are more blue than purple. (Oh, how fickle we are to purple when there's blue around!) It's a woody vine,  and evergreen where it's in its element, in contrast to P. incarnata which grows back from the ground each year. P. caerulea is only hardy to Zone 8, or 7 with microclimate protection. 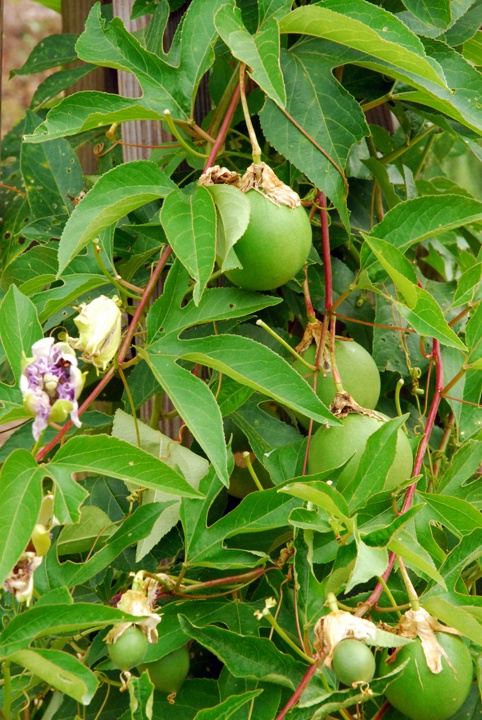 Passion flower vines are prolific bloomers if they have a long, warm growing season, lots of perennial wood (if they don't die back completely or have to be cut way back to fit into their winter quarters) and a good sunny situation. Here is a blue passion flower vine ripening a bunch of fruit, even while it continues to flower.

We grow passion flower vines as annuals or "temperennials." (Thanks, Pierre Bennerup of Sunny Border Nurseries in Connecticut, for a truly good, quick way to say "it's a perennial somewhere but not in my area where I either grow it as an annual or bring it in over winter.') Full sun is best, and loose well drained soil plus steady water.

Problems? Hoo boy, do watch out for scale!

Steven caught this flower about to open. He's still  looking for the full-bloom photo he knows he has somewhere. (Poor guy, if Janet would stop asking him for new stuff he might be able to keep up with cataloging all the existing shots!) To see full bloom, use the "Images" filter on a search engine to see what's on the internet under Passiflora. Close ups are sure to pop up by the dozens since it's what catalogs always show. Might be better if they showed the whole, big, leafy, vine running up to overwhelm the standard trellis and go on to smother the shed...

Alternatively, go to our Forum and post that you would like to see the flower. Everyone who's grown it has taken at least one close-up of a glorious bloom! 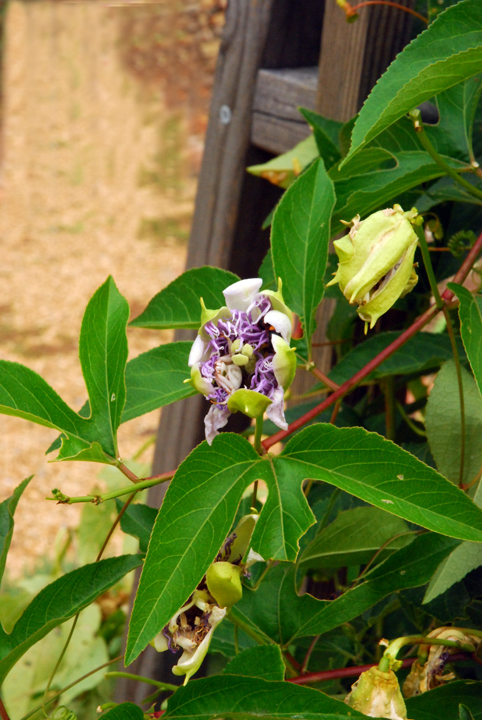