...and fertilizer too? But maybe, probably not!

J.S. writes:
In a class, you mentioned we do not need to deep root feed our evergreens because of all the needles that fall from the evergreens and that provides enough of the acid it needs. I'm asking this because I need to have my Colorado Spruce evergreens sprayed because of Gull or whatever it is that is on them. I just got the price quote and it included deep root feeding of all the evergreens. I have 6 of them in the back area of the yard sitting in black gold so those I don't understand why they would need deep root feeding. One of the Colorado Spruces along the side of our home has always struggled so I'm wondering if it would benefit from it or not. Just don't have the extra money laying around now but if I need to do it I will. I just don't trust salesmen/retailers as they are there to sell product.

1) You may not need to treat the spruce gall with insecticide or anything else. If you do, be aware that timing is critical.

2) You may not have to fertilize at all. If you do, surface application is best.

4) Improve a tree's health, it'll manage its own pests.

5) One way to improve a tree's health: Aerate the soil. 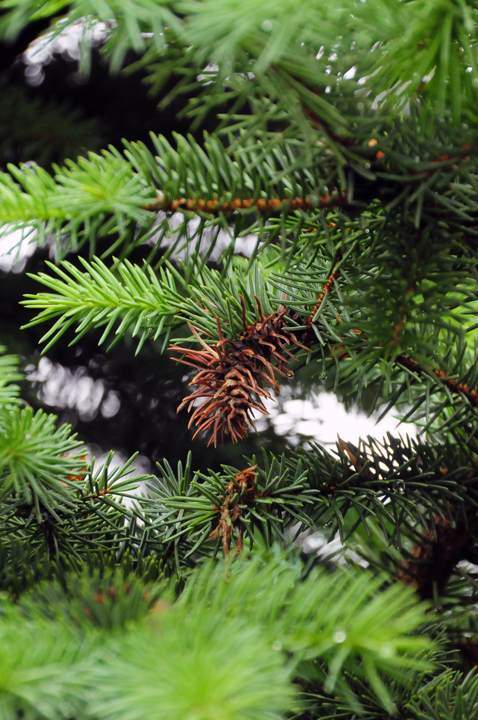 Here's the type of gall most people see on blue spruce, at the tip, created by the feeding of Cooley spruce gall adelgid.

You may not need to treat spruce gall, at all!

If your trees are hosting the most common gall-making insect that affects spruces -- an insect called Cooley spruce gall adelgid -- their problem is cosmetic. That is, it may look unattractive but it is not life threatening. If your trees are hosting spruce twig gall makers they may need help if they're very young or the infestation is very heavy.

Cooley spruce gall adelgids infest the growing tip of a spruce limb and feed by sucking on the needles. Their excretions cause the tip's growth to become distorted, and the tip dies. Nevertheless, the loss of even a hundred tips is not a serious blow to a good sized, vigorously growing spruce.

Spruce twig gall affects the wood of the branch, causing it to deform and weaken. The tree may later shed that branch. Because whole twigs are lost, the overall loss to the plant may be greater. A tree might need help getting ahead of twig gall even though its total insect load is smaller than one with Cooley adelgids which we leave to its own devices.

How to gauge the damage

The general rule is that if less than 20% of a plant's foliage is being lost to a problem, it's not a significant issue. Young trees might be harmed at lower rates then older trees.

It's important to determine how much damage a tree's sustaining. 20% foliage loss is a break point between "let it go" and "consider intervention." Here there are about 10 dead tips, but at least 28 undamaged tips plus many unaffected segments of equal size/needle count behind the tips on each branch. With 10 tip segments lost from at least 160 healthy segments, it's 6% damage -- no big deal. 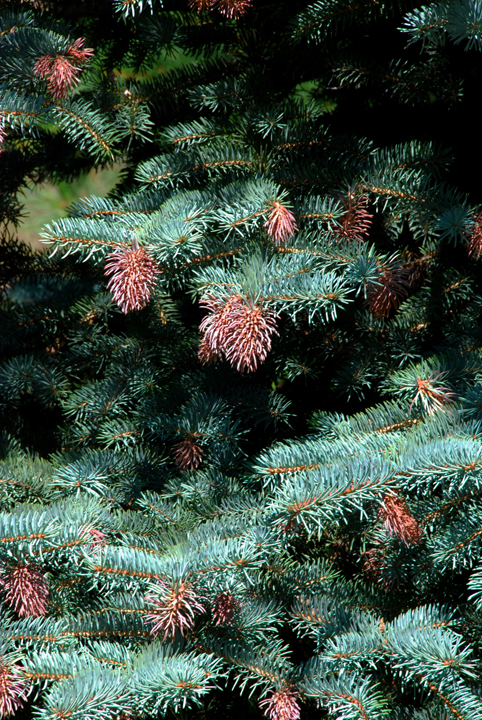 This is that 6% damaged tree. Our eye may focus
on the brown but the tree isn't in danger.

Second, you do not need to fertilize trees and shrubs if their growth rate and color are normal for their species and/or if a soil test indicates all nutrient levels are normal.

A given fertilizer may contain one or a number of chemicals -- plant nutrients -- that are necessary to good plant health. Many fertilizers supply the three chemicals plants use in greatest quantity, namely nitrogen, phosphorus and potassium -- N, P and K. Without a soil test we can only guess which fertilizer -- which mix of nutrients -- should be used.

Dark, rich soil can have nutrient deficits, especially if raked

However, darkness is not an indicator of other nutrients' presence or absence. A dark soil may have enough or too little potassium, phosphorus or micronutrients -- elements that are also essential but are dubbed "micro" because they are used in less quantity than the big three.

Some gardens operate at a loss because we prune and weed and rake, removing all or most of the organic matter that could or should fall on the soil. That can deplete even the best soil. That's why it's good to use slow release organic fertilizer for both nutrients and to supplement organic matter, and test the soil from time to time to know if and which fertilizer may be necessary.

When fertilizer is needed, it's best to deliver it to the entire root zone. Most nutrient absorption happens in fine roots very near the soil surface, so broadcasting fertilizer over loose soil is ideal. Placing it deep, in concentrated doses is not necessary and can be a waste. Yet sometimes the action of placing it deep may help in ways unrelated to the nutrients. (See Aeration.)

It's a fallacy, despite being long-held and often published: The notion that needles and other evergreen foliage acidify soil has been overturned during the advance of composting science. Needles may influence the surrounding soil's relative acidity (pH) as they rot, to make a soil temporarily acid. Then it is quite normal for the pH to swing the other way, stabilizing at slightly alkaline. However, the same changes happen during the rotting of almost any type of organic matter.

If you need proof, do two separate soil tests in your yard, taking one sample from an open-sky bed and one of soil from under a mature pine, spruce, yew or juniper. You will probably see no significant difference in pH. We have done this. Each time, all of the beds tested nearly the same, within normal range for our region (mildly- to very alkaline). In one case a bed under 50 year old pines was the most alkaline area on the property.

We don't know where evergreen foliage and soil acidity became garbled. When we see poor growth under evergreens we often find that water is an issue. Even when watered as well as other areas, plants there may fail to thrive because the dense foliage so effectively blocks rain and snow.

Just give them what's right and let 'em grow!

Fourth, plants normally take good care of themselves if we simply give them proper growing conditions. If a plant struggles because it doesn't have the light, water, or soil type suitable to its species, insects or diseases which would otherwise be non-issues can become big trouble. Sometimes one struggling plant in a group may even contribute to healthy plants' problems by allowing insects or fungal spores to multiply. If a tree is growing poorly, figure out why. Fix that issue and other problems will fade.

Last but probably most important, aeration is one of the best things for struggling plants in landscape situations. Densely packed soil is common around buildings. It has too little oxygen and conducts water too poorly to keep roots healthy. Trees there don't establish adequate, wide root systems. When the roots are inadequate the tree may be unstable as well as unable to fend off its pests.

One way to break up compaction is to drill holes at regular intervals all through the root zone (see  Spruce Down to envision the root zone). Fill the holes with looser material or compressed air. That encourages everything from worms to beneficial bacteria and fungi. The soil animals and/or air crumbles the sides of the hole. The effect gradually spreads.

Sometimes what is called deep root fertilizing involves drilling holes, inserting fertilizer and blowing in compressed air. The action of applying fertilizer in that way aerates the soil. Side by side tests have been done to compare trees fertilized that way to trees treated that way sans fertilizer. Trees responded as if fertilized from aeration alone.

Be confident of who will work with you

To summarize, don't treat the trees unless you know which gall you're dealing with, how much foliage is being lost, whether aeration is involved, and what basis was used to prescribe and choose the fertilizer. If the company that gave you the proposal can tell you all this, connecting each item clearly to the actions they've prescribed, that's someone you want to work with. If they cannot enumerate or explain, ask someone else to look at your trees and make a recommendation.

Below:
Each Cooley spruce adelgid gall is the plant's own branch tip, grown thickened and twisted, and now dead because of the insects' secretions and feeding. A heavy infestation might be controlled with a well timed insecticide application at budbreak sprayed forcefully so it penetrates the dense growing tips. Any action during other seasons is not warranted, other than to clip off the unsightly brown. Why? An arrow points to the exit holes. The adelgids are gone until spring. 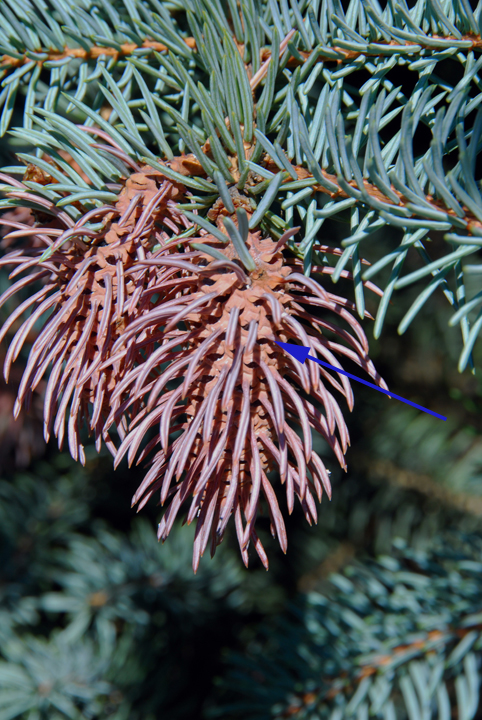 The mature adelgids overwinter on the spruce twigs, near the buds where their young will take upresidence. When the cornelian cherry (Cornus mas) is in full bloom, or a serviceberry's (Amelanchier) flower buds are just showing, or red maples (Acer rubrum) are in full to late bloom, those adults are about to lay eggs. This is before the spruce breaks bud.

At that time and almost no other, the insects are vulnerable to insecticide applications.

If your tree care company operates by the paper calendar rather than by local plant development, they're likely to miss this window. Make yourself a note to watch a neighborhood cornelain cherry, serviceberry or red maple and call your tree care proivder to say, "Today you need to be here."

Below: Take a page from Don Orton's well-respected reference, Coincide  and learn enough about a pest such as Cooley spruce gall adelgid to test your tree care service on their knowledge. 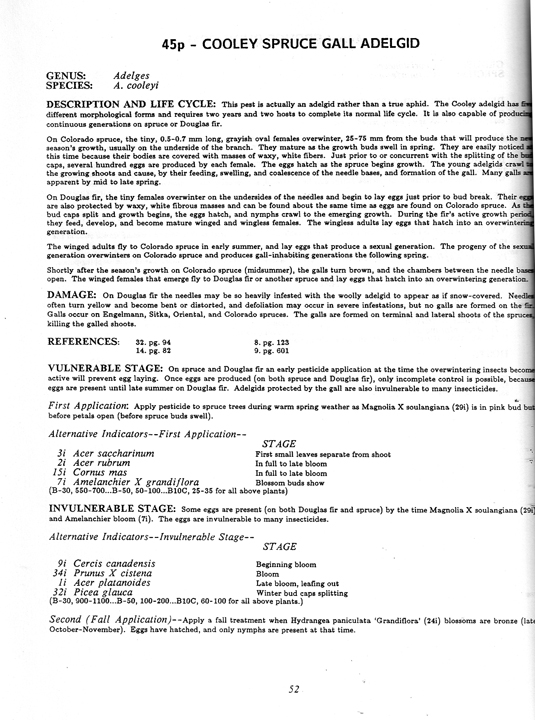