Wait, then choose main limbs,
elevate the tree,
aim to cut only one third,
keep a bud count, and
preserve branch collars.

Take off only damaged branches until a new tree becomes established. That usually takes about one year for each inch of trunk diameter at planting time.

We know a tree's established when it resumes growing as many inches per year as it can. Compare the current year's growth to how much it was growing each year in the nursery.

Choose main limbs: Allow each its own piece of the sky

In five growing seasons this white oak doubled in height (arrow in center picture marks the leafless branch tips) and now has about ten times its starting number of leaves. Some people would just say, "Attaway, little tree!" and let it grow but we're pruning for the future. This article is the how and why of that pruning to make this a great shade tree. 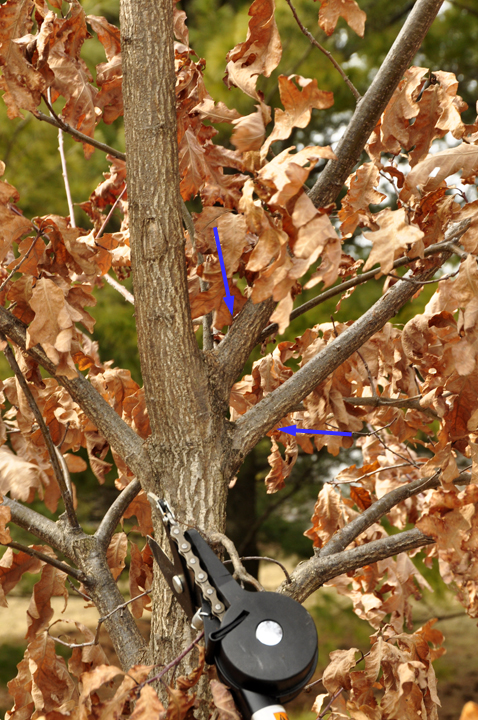 Once the tree is established, clip away. Focus on the far
future. The branches you leave should be gracefully
arranged to fill out but not compete for the canopy's
north, south east and west sections.

Left: This little oak had what's called double barrel or
shotgun branches -- limbs of equal size positioned
to try to fill exactly the same part of the sky.
We removed one.
If both were left in place they would develop into what
you see on the mature tree (below, right). It makes an
unbalanced crown and causes the tree to grow twice as
much wood (an energy drain) to capture the same
amount of sun (a plant's sole source of energy) that a
single limb could claim. 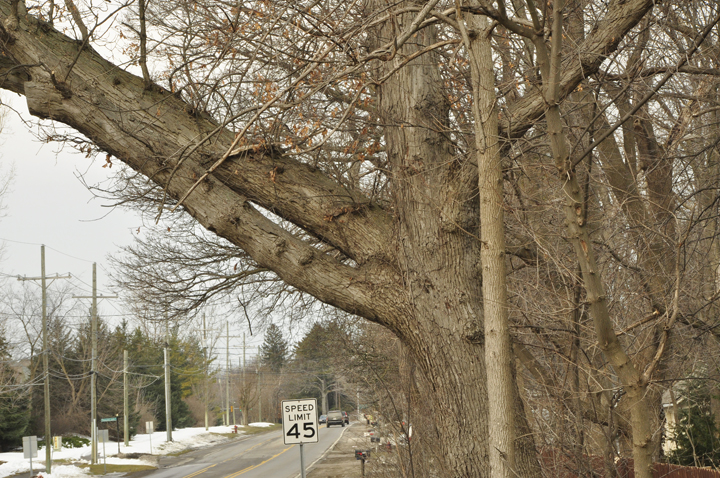 Elevate with the future in mind

Remove lower branches until what remains is high enough above ground to allow plenty of headroom. We aim for a park-like feel, with shade but enough air movement to make picnickers happy and enough light to keep grass growing. So we prune away lower limbs year by year until at last we are standing on a step ladder to do this work.

Branches do not move up on a trunk as a tree grows. The trunk and the branch both increase in girth, and each add to their length, but a branch that joined the trunk at four feet from the ground will always be four feet from the ground. At any rate, its center will be there. Since it will increase in diameter, its lower edge may eventually be closer to the ground than when it first formed.

Below: Although Janet's reaching over her head to elevate the tree -- remove lower limbs. -- it's not enough. We'll do it again after the tree grows taller, and again until the trunk is clear for ten feet or more because we aim for the kind of high canopy on the old double barrel oak. 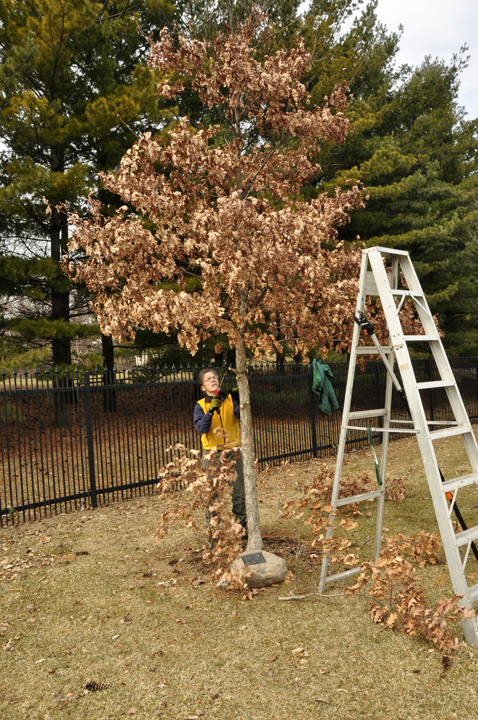 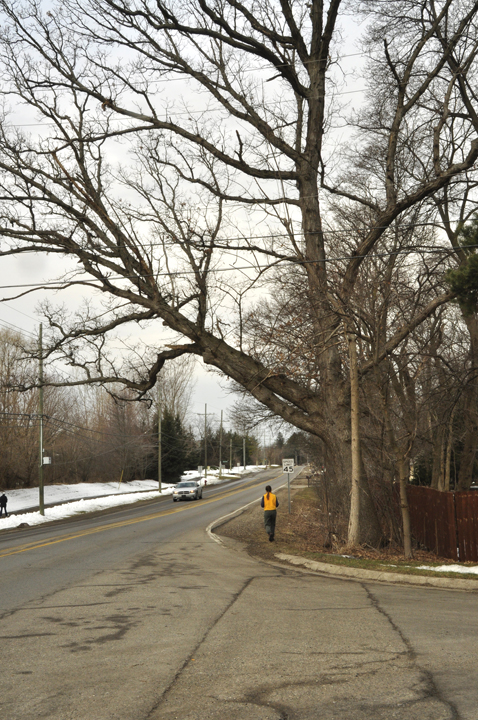 The one-third rule: How it evolved, and applies

As you figure which branches you'll remove, estimate how many buds that will take away from the tree. Try to leave twice as many buds on the tree as are in your clippings pile. That's in keeping with the recommendation that we take away no more than 1/3 of a tree's foliage in any year.

This isn't a hard, fast rule. Yet it's a good guide if we want to leave a young tree with plenty of energy and avoid simulating it to sucker wildly.

Why 1/3? Most plants can produce enough energy with one leaf to make three the next year. With that energy they can replace in spring all that they dropped in fall, add an equal number of new leaves, and still have energy in reserve in case leaves are lost to pests or weather. So even if you remove one-third of its leaves a tree can gain ground. Thus the rule "Don't remove more than a third of the foliage at one time." 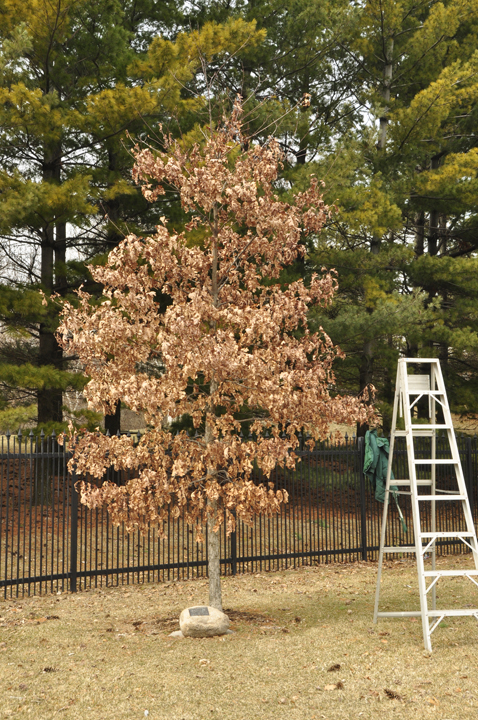 The one-third rule is a good guide when you
want a plant to keep getting bigger but it can
be broken. We break it all the time when we
are Pruning to Keep a Tree Small. Another
situation that may prompt us to break the rule
is when a young tree has a lot of clutter and
many badly placed limbs. Then, it's better to
cut away and "ask" the tree to produce new
limbs while it's young. It will be better
balanced sooner in terms of number and
spacing of main limbs. 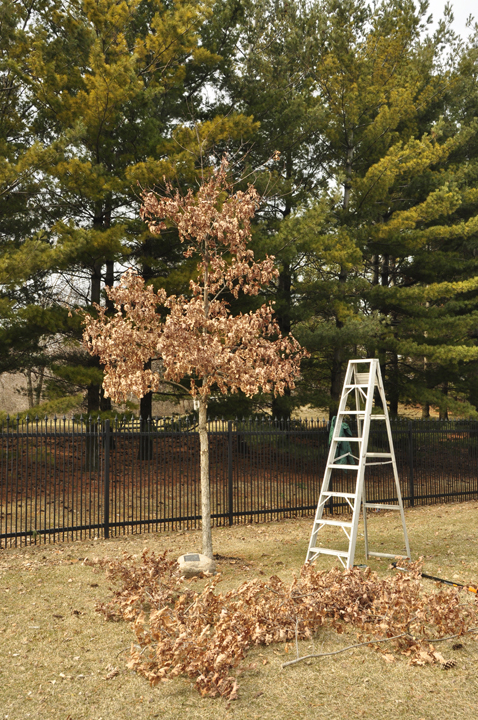 Above: Adhering to the 1/3 rule. The branches we removed are on the ground. The leaf buds on them add up to about half as many as are left  on the tree. The proportion may look more like 50-50 but that's because a number of the bud-dense upper branches on the tree are nearly invisible in these photos because they have dropped their leaves.

Right, and above, left: Blue arrows mark the leafless top of the tree.

Count leaves or buds,
not length of limbs

Don't confuse bud/leaf count with amount of wood removed. In training a young tree you will probably take out mostly lower and inner branches, which tend to have fewer leaves per inch than limbs higher in more sun. So you may remove more than one third the total length of branches, yet the tree continues to grow with gusto.

Right: Here's an example of a long length of wood removed without removing as many buds as are then left on a similar length of wood on the tree. The owner of this kousa dogwood (Cornus kousa) asked if it would be okay to shorten the lower branches that are interfering with the patio in the foreground. The plan is to one day sit under the tree's branches.

We recommended removing the lowest main limbs (A; and eventually those at the B level as well) rather than shortening them. The  canopy (C) is already developing well on higher limbs that will serve the overall goal. That seems a major reduction but the lower limbs are mostly wood, compared to the higher limbs that are in more sun and more densely clothed in buds.

The owner was then concerned about losing the plant's wide vase shape. However, that won't happen. The tree might temporarily seem narrow but it is the specie's natural  habit to spread. Side branches will grow out from the remaining limbs and the crown will again be as wide, but higher. 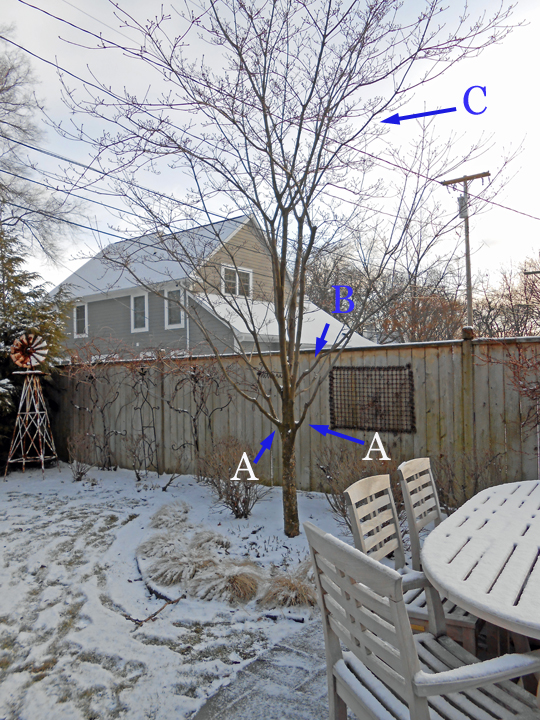 Preserve the branch collar as you prune

Leave the thickened base of the branch -- the collar (below). It's from the collar that woundwood will develop to seal the pruning cut.

Use the three-cut method to first remove the weight of a large branch, avoiding tears from the branch down into the trunk. Then saw the stub to just outside the branch collar. 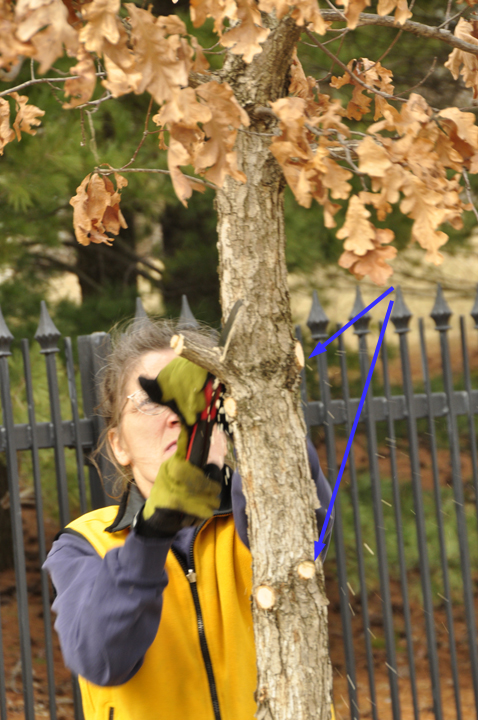 No paint or dressing is necessary and can even be
detrimental. The tree will seal over a wound better
on its own.

Sponsored by Judy and Dan Kurkowski in memory of Daniel "DJ" Kurkowski who
lives on in this oak planted in his
honor.

Read more of our Sponsor-recommended articles

You, too, can help us help others grow.
Sponsor a topic of your choice!