About plants that need long nights

Many plants are spurred to change their growth -- to form flower buds, stop elongating, etc. -- by seasonal changes in daylight. Most follow a combination of cues, so temperature, moisture, plant age and day length all come together to bring about the change.

Others, called "short day plants" or "long night obligates" cannot form flowers unless there is a period during the plant's active growing season when there is unbroken darkness for a relatively long time in each 24 hour period. Species vary in how long the night must be, and for how many days or weeks they must experience that daily dose of darkness. 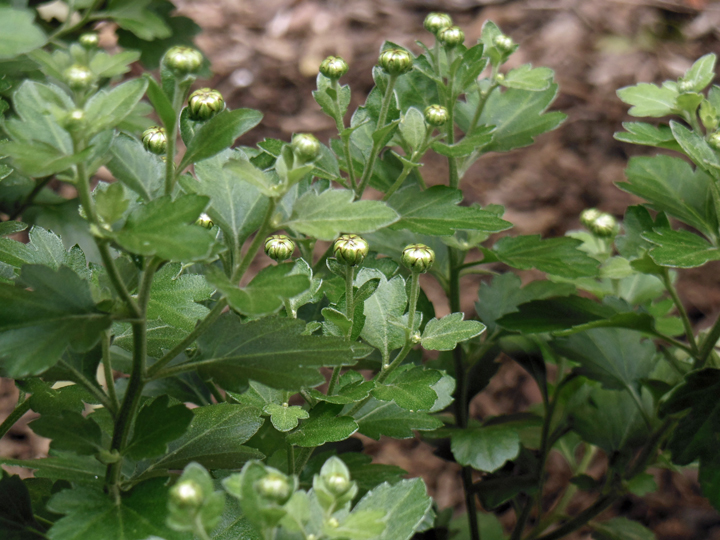 Flower buds simply will not form on a mum if the nights aren't long enough to cause the right dark-induced chemical mix.

Garden mums (Dendranthema spp.) are long night obligate plants that require 10-12 hours of darkness to bud up. Poinsettias, jades (Crassula) and kalanchoes have similar needs. They're pretty demanding -- the darkness has to be continuous, and strong or lasting light during the night can disrupt flower formation.

Professional growers use controlled greenhouse lighting and blackout cloth to create long nights for just the right number of weeks. Then their crop is in bloom just when buyers want a poinsettia in December or a kalanchoe for Valentine's Day. The gardener who decides to keep growing that plant and wants another round of bloom the next winter should be sure as fall comes to keep it in a room that's sunny by day but dark from sunset to sunrise.

A Kalanchoe can bloom for months, once it gets started, but then may go for years without reblooming because the gardener doesn't know to keep it dark at night.

Both mums and muggers are thwarted by a light

We had an "Ah-ha" moment this fall related to mums' need for long, unbroken nights.

A client asked in September, "Are those mums ever going to bloom? I don't even see any buds." 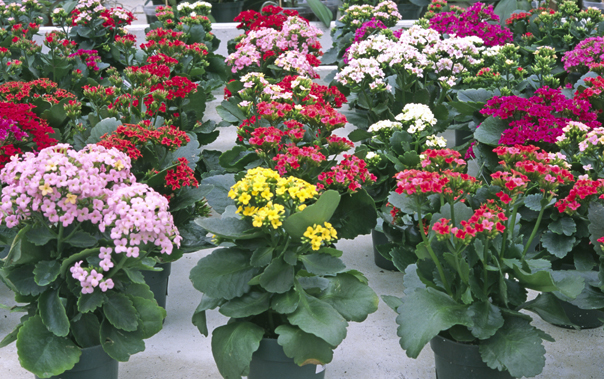 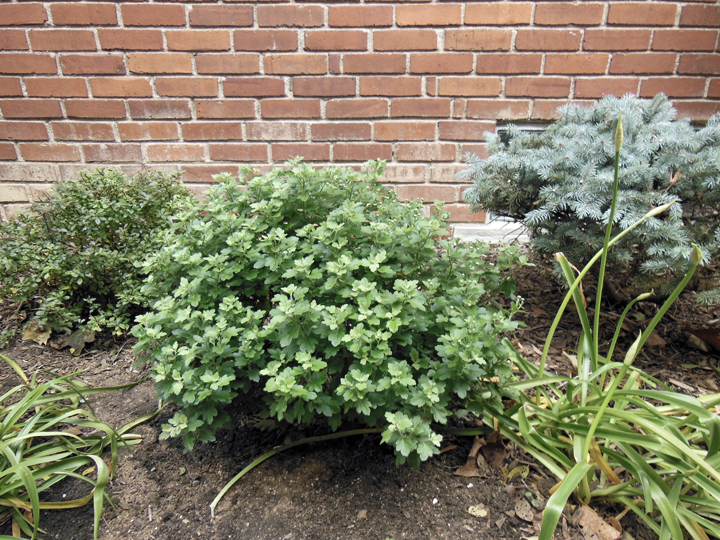 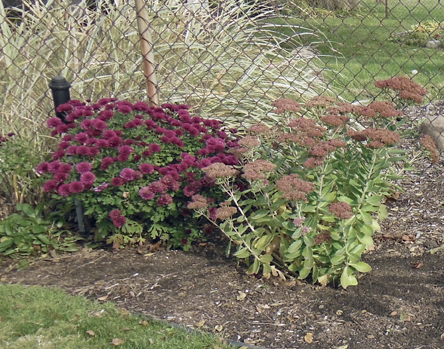 The plants in question (such as the one above, left) had bloomed in pots on the porch the previous fall and survived winter in that exposed situation. We'd decided such tough characters should be planted into the garden. Now, they were still green duds while other mums in the yard were in full bloom (above right, 50 feet away, photo'd on the same day.)

"They sure should," Janet replied. "They were blooming by now last year! But some mum varieties are later to bloom than others and maybe these are late types that were manipulated by the grower before we got them, given long nights early in a greenhouse... Let's give them some more time."

Two weeks later, flower buds appeared, but not on every branch tip.

"That's odd," Janet said, "it's almost as if only this side of each plant is dark. Like there's light coming from over..."

Here's what Janet saw. She had missed the connection between site and mum's needs. Do you see the problem? 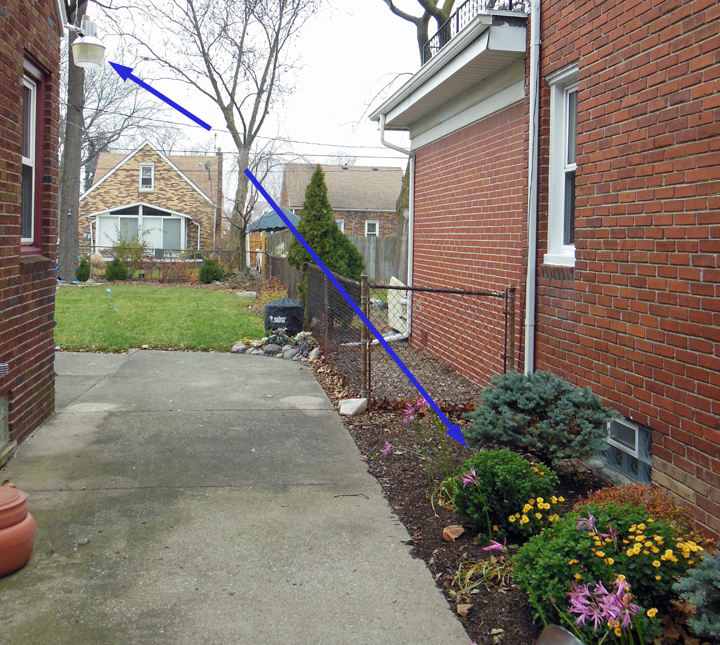 The culprit: That security light

That's when she turned and saw the security light. "I never noticed that light. Do you leave it on at night?"

"Ah. So, only the part of the plant that isn't lit by the light is going to bloom."

The mums opened their flowers in a patchy show at Thanksgiving. The disruptive light came from above and left (arrows) so only low brancheson the right side and in back had the necessary darkness to form yellow flowers. We'll move them far from that night light, next year. 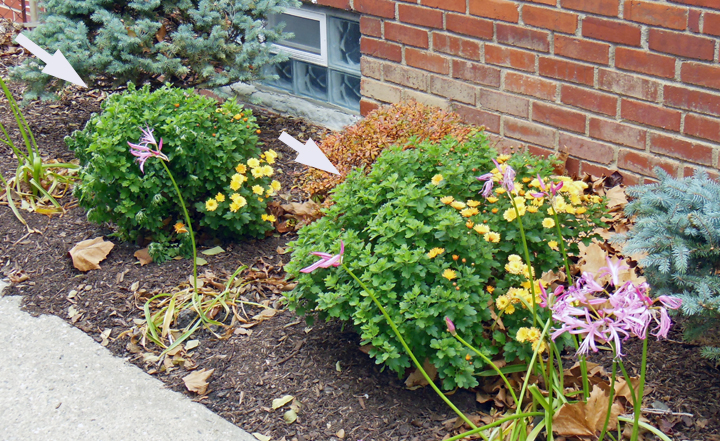 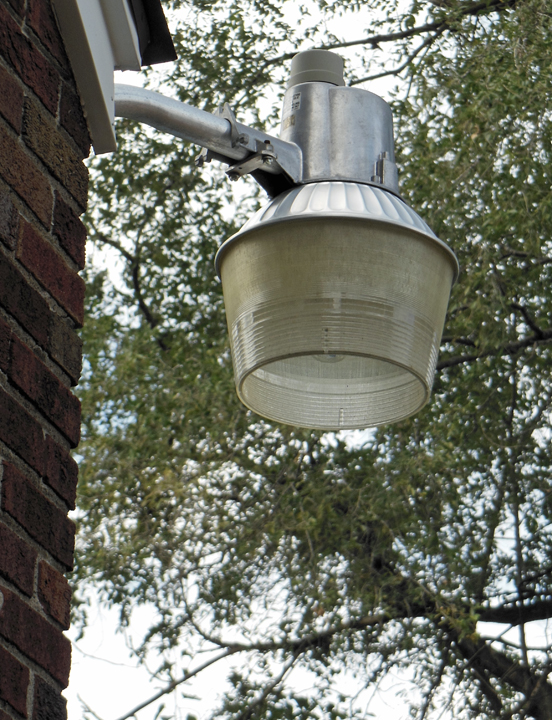 What's pink and blooms in December in zone 5-6?!

Because we know you'll ask about these coincidental pink flowers:

Those are plants that were already established in this garden when we came on the scene. The owner's no longer sure of the name but we're fairly certain it's Nerine bowdenii. It's a summer-dormant South African "bulb" normally only hardy to about 5F -- zone 7. It found itself a sheltered place in this zone 6 yard.

Incidentally, we don't see many nerines since they're not usually hardy in zone 6, but where we do see them, they're in bloom in October, not early December when we took this photo. We don't think the light is causing that late bloom, however. Probably they're just late all round, since this foliage doesn't emerge until spring where in milder climes it emerges right after the bloom fades and remains through winter. 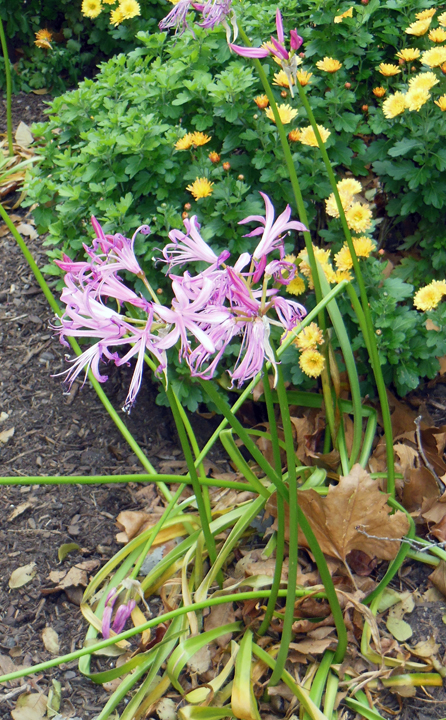 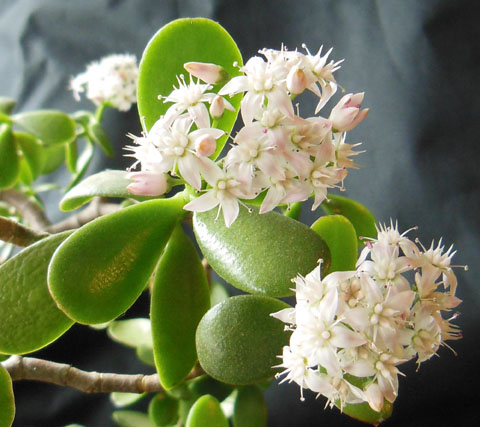 Arrange for a jade to have a few weeks
of cool 12 hour nights and it will bloom.
If you keep it outdoors in fall and
watch the weather so you know to bring
it in to a dark room on any frosty night,
you can engage Nature to give it those
conditions.

Twelve-hour nights don't come until early September in our garden. Our jade needs 21 to 28 of those long nights plus some cold to prompt it to form flower buds.

Since we like to see it bloom when we bring it in for the winter, we leave it out long into October. Yes, it's a challenge to guess whether a given night might be too cold and sometimes the frost catches it, even on our covered back porch. We'll tell more of that tale next week.