Do you own our magazine, Trees? Some of our best work on tree planting is there. (It's not here on the site. Yet.). Here's an eye-opener from that magazine from the article Starting Small, to help you foresee how much time it takes a tree to become established:

Tend each one well until it resumes normal growth. Water it faithfully throughout all its establishment years to keep the root zone moist but not soggy.

Here's how those two will increase in size:

The smaller tree: In one year the one-inch tree resumes near-normal branch growth and adds a foot to its height and canopy radius. After year two we can see it's going to continue at this pace, so we say it's established.

The big guy: Looks impressive right away but labors that year just to keep a too-large top going with a too-small root system. It grows only about an inch.

In 4 years, a matched set: After 4 years the smaller tree is just a bit shorter than the one that started larger. However, it probably looks bigger for being healthier and fuller.

Meanwhile, the tree that was four inches in trunk diameter and 12' tall at planting has added only about six inches by the time it gets into its 4th year. It will not have an appreciable growth until that time. Then, it adds six inches in year four, and increases that rate to ten inches the next year. By the beginning of its seventh year it will be growing at one foot per year -- that's established at the lower end of its species norm.

When a tree reaches and sustains its species normal growth rate, we say it has established. That means the gardener can at last put away the sprinkler that's been dedicated to keeping its root zone moist.

This river birch was 2" caliper at planting. Here we're using the unwrapped burlap as a sling to lower it into its hole. (For the complete planting process, see Oaks got flare.)

Its root ball looked big and certainly was a beast to move around but it contained only about 25% of the roots the tree had before it was dug for sale. It took a little more than 3 years for the tree to grow enough new root to fully support itself. Then it took off and began growing like a champ. At ten years, it had doubled in size. 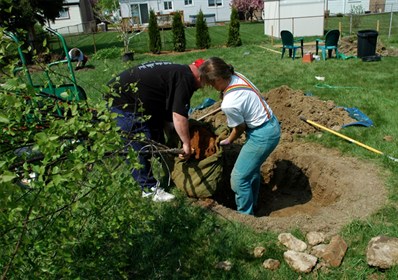 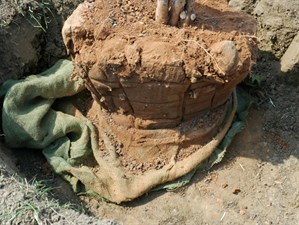 Both trees in our chart begin their seventh year even up at 14' tall. However, the tree that was smaller to begin with gains ground for at least a few more years. It has grown and will continue to grow more each year than its partner because it is healthier, with a wider, more self-sufficient root system and more starch reserves stored away to help it through rough times. It was less stressed by its initial uprooting (when it was balled and burlapped or containerized for sale) and every year after was less prone than its partner to insect or disease damage.

Right: Plant sizes can be deceiving and the fastest growing species are often the biggest. So look into mature size and growth rate before you decide what to plant. The little river birch (Betula nigra) you see us planting above doubled in size in 10 years, will be as large as the birches at right in 15 years, and still be only half grown. It's a much bigger tree than its little cousins, the paper birches. 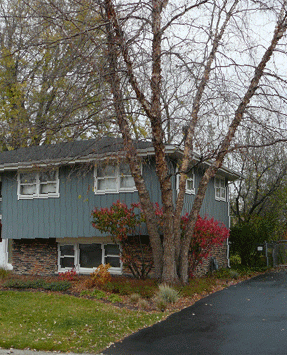 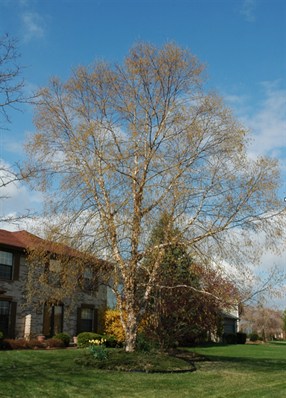 You can see why a river birch often outgrows its gardener's expectations. In What's Coming Up 23, see what we recommended and the owner did to avoid losing the over-achiever, near right, once it reached its site's limits. Photo ©2008 C. Gibbs

Not posted yet: The articles in our magazine Trees are not yet converted and posted on GardenAtoZ.org. We have so much to post that we set to the end of the line those articles that are already available in other media.

Sponsors enable us to do this work -- individuals, groups and business are all helping us in that way but there is still much more to do!

When you Sponsor us, you can specify what article or topic you would like to see developed or moved to the head of the line.

Please help! It's simple to Sponsor us and even the smallest amount can support a new posting. Simply name the  topic you wish to see added or article expanded when you email your Sponsorship pledge.

Or you can buy the magazine, Trees. We produced that and our other magazines to raise funds to start this site, and their sales continue to go into its development. 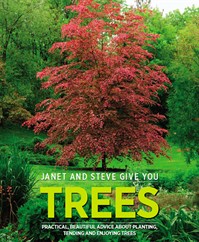 Shades of Green nursery in Rochester, Michigan
made it possible to post this and other tree planting articles. 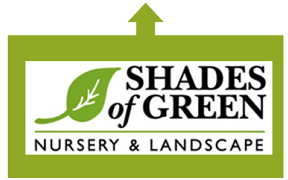