Should I clear the snow off my bushes? In some places it's getting pretty deep. - P.F. -

We need your help as a Sponsor and
to tell us what to post next from our library!

This article may also be downloaded
as a pdf: What's Coming Up issue 195

Winter can be beautiful. Enjoy the beauty in the many pretty photos in this article. But do watch for snow, ice or salt heavy enough to cause damage. 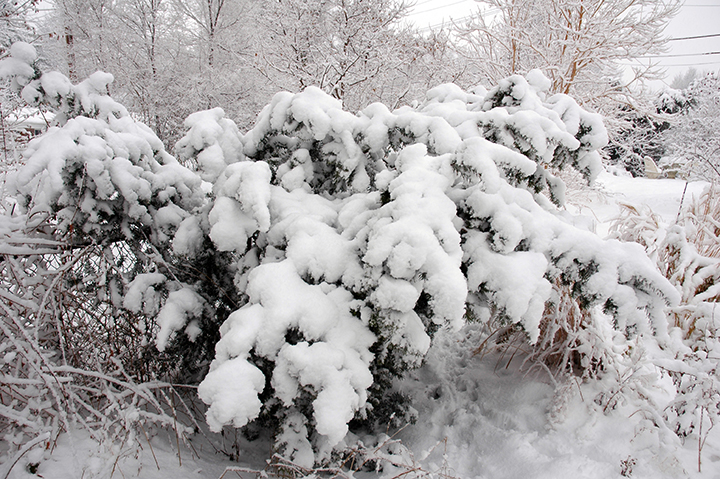 Yes, if the branches are sagging more than a little. The Hicks' yews pictured above (Taxus x media 'Hicksii') stand 12' tall but are bent to just above a 4' chain link fence. That's significant.

It's a good idea to remove such heavy snow, or prop icy branches to relieve some of the strain.

Some plants are more vulnerable under a heavy load of snow or ice.
Most likely to break are species with brittle wood -- horsechestnuts, older rhododendrons and singleseed junipers like 'Blue Star' come first to mind.

Also high risk are those with branches attached to the trunk or each other in a tight V. Such crotches often develop included bark, a condition that results in increasing detachment as the bark grows within the crotch and exerts outward pressure against the limb. Callery pears, especially the older 'Bradford' variety, are poster children for included bark and calamitous splits in winter.

Frequently sheared shrubs also tend to have problems under snow. They become so twiggy at the top that snow can't sift through. Instead, it piles up. In addition, the internal branches are too weak to bear weight because they've been sheared without any thinning. 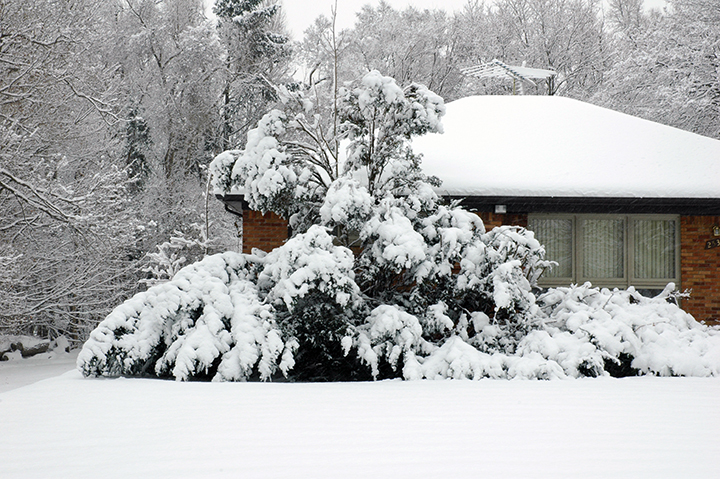 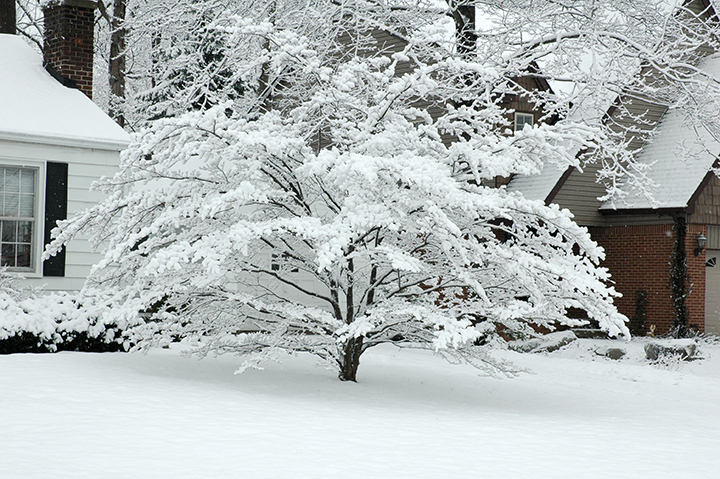 Branches that can descend onto each other, with the lowest then resting on the ground (above, left, the yew at the far left) and near-horizontal branches with wide angles of attachment (dogwood tree, above, right) are most able to bear lots of weight. They will not usually break and can rebound even after a few weeks bent out of position. However, breaks are much more likely when the vertical trunks bend (above, left, center arborvitae and below, the pyramidal yew Janet's brushing up to relieve of its snow).

Probably the most snow-tolerant plants are those with layered horizontal branches. Each branch can sag onto the one below, and the lowest descends to the ground. Spruces and pines are the premier exhibitors of this cascade defense. 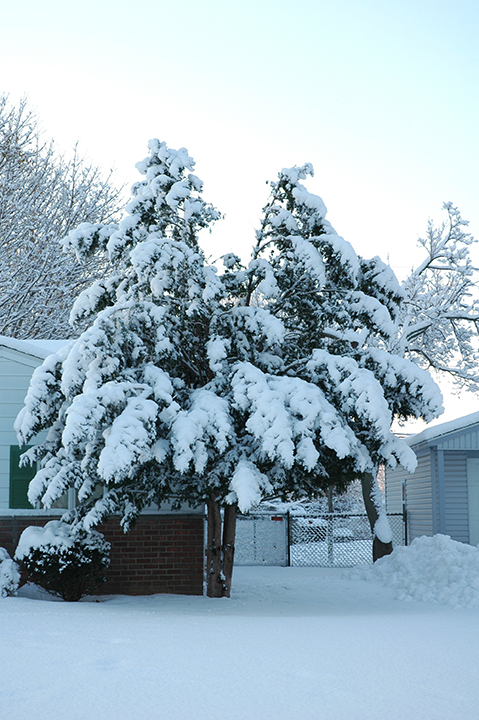 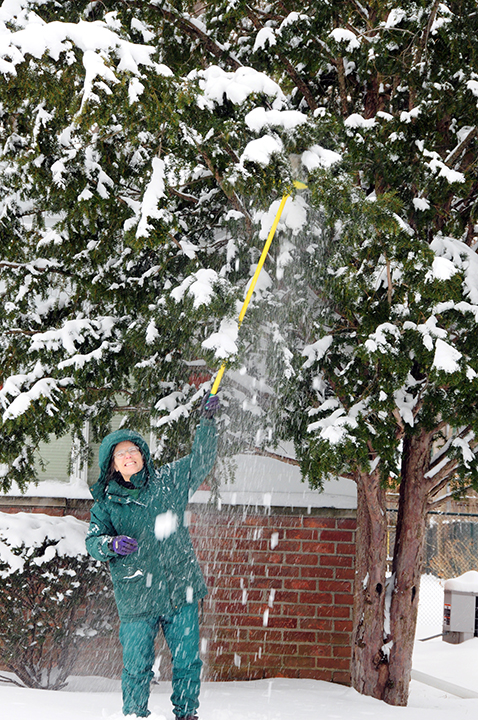 Brush UP to remove snow

If you go out to relieve plants of snow, don't knock down -- brush up. Insert a broom or a rake under the snowy branch. Then draw it out and up so that you're supporting some of the weight as the snow is jostled and falls to the sides. If you beat the plant from above with a broom -- we see this done all the time! -- you actually increasing the chance of broken limbs because the impact from above adds more weight, suddenly. That's a recipe for a break.

If a branch ices up so you can't knock it off, prop it. Forked branches, upended rakes, crates, plastic patio chairs, ladders and lots of others things have been props in our garden.

Other tips and topics of winter damage

We've written a good deal about winter damage to trees and shrubs, from split Japanese maples through the weight of ice to good and bad uses of burlap. Here are those topics, with links to the articles or the What's Coming Up issue that contains the article. 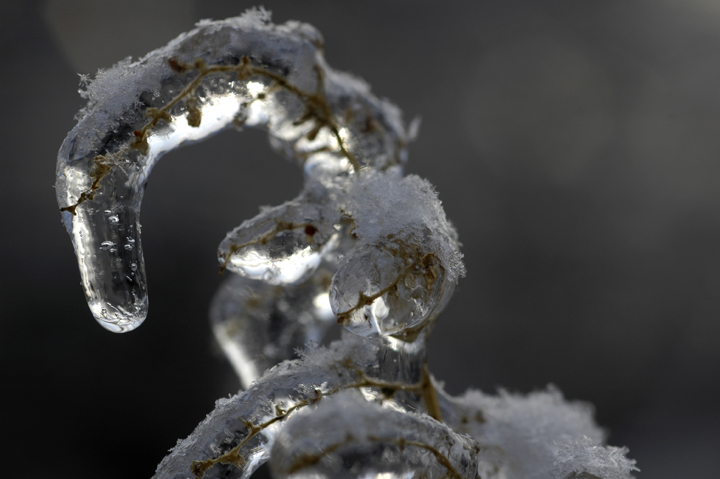 Thinking as you shovel and plow: 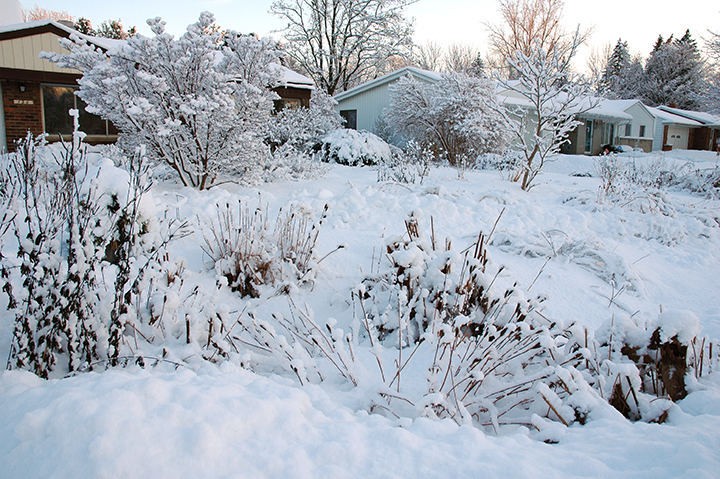 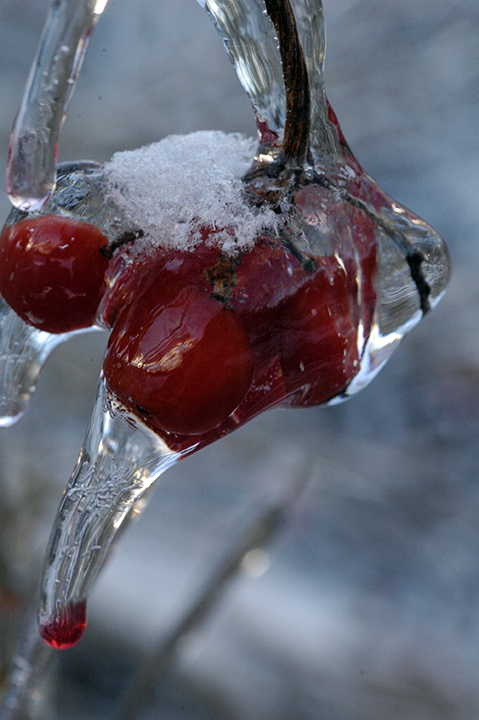 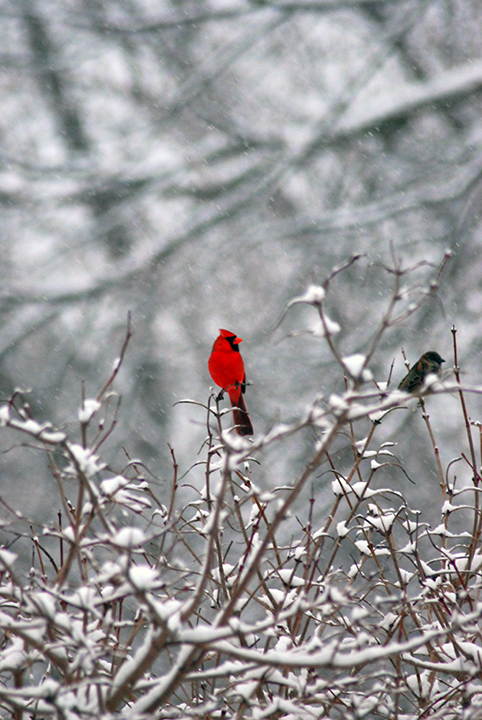 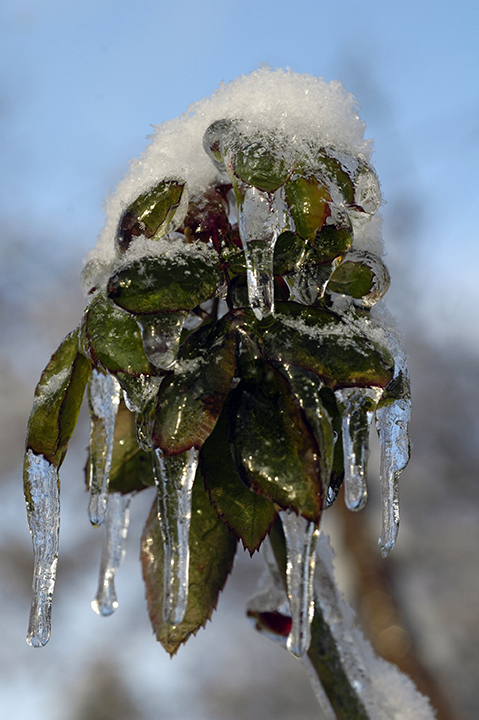 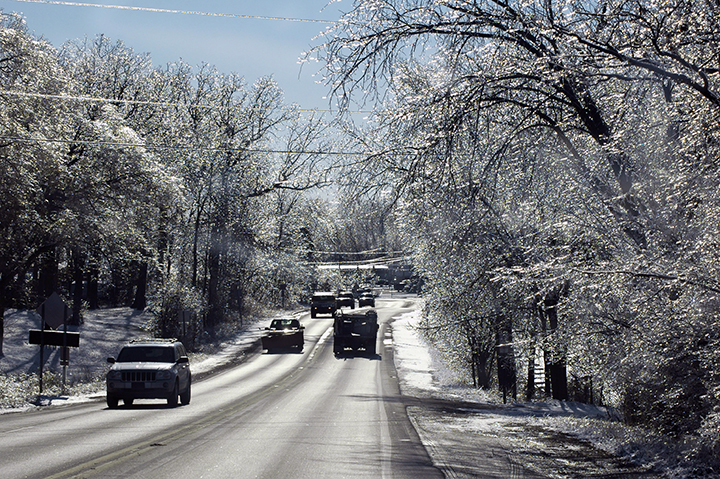