Cut weak wood hard...
Clippers are better than saw...
Hard cuts are less work...
No thanks for gift plant...
Show proof of gardening...
Keep all the water that's given to you...

Often while we garden we carry a tune or a phrase in our heads. It might be anything from a catchy phrase applicable to the day to a commercial jingle from 'way back. Sometimes it's just a fragment, and runs on in an endless loop -- oh, so annoying.

Occasionally the mantra makes us smile. For instance, in spring when so much needs doing that we pray for help, advice from mentors sometimes joins this "hit parade." Phrases from people who taught us to grow loop along there. Their voices are almost always comforting and their words useful.

Here are some winners that have blown in with recent spring breezes. We hope they might help you, too.

It gives us confidence when we prune, so we rarely hesitate.
We prune what's weak back to a stronger limb, even to the
base of a plant.

Roses and hydrangeas are good examples, as are most of the summer blooming shrubs.

This advice applies to Clematis vines, also. The photo at right is clippings from a single Clematis, as seen in the pruning how-to in Growing Concerns 511.

This advice came to us from Janet's childhood mentor, Mr. Kissinger. 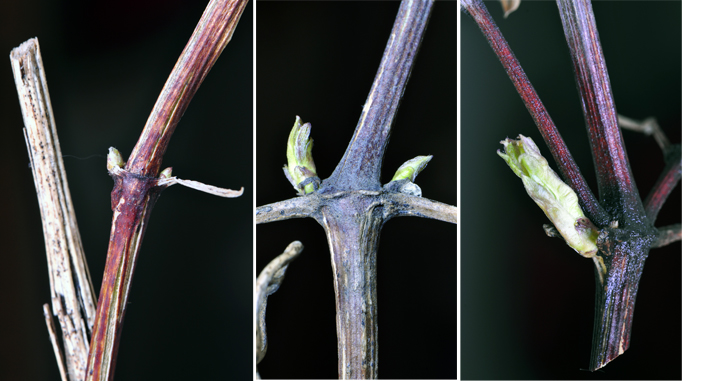 These three pictures were taken on the same spring day to show you buds (left to right) at the base, middle and top of a Clematis cane. The difference in their sizes explains why a plant tends to be leafiest at the top unless you regularly cut some canes lower, even cut them to the ground. It happens because the top buds on a branch grow first and command lower buds to grow less or not at all. When you remove the top buds the highest remaining bud -- even a dormant bud -- is released to grow more vigorously. 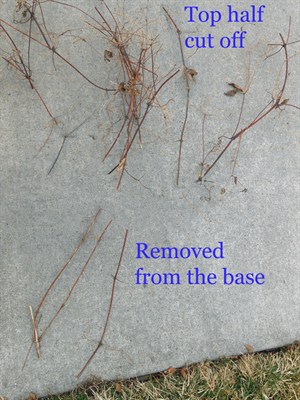 (Click for our best Clematis pruning pics ever, in Growing Concerns 511...)

If you need a saw to prune a tree, you waited too long.

Mike Loncar, told us this, and "Clippers are always better than a saw. Envision it large to decide what to cut, but don't wait for it to get big."

Mike's been gone many years but visits us still, each time we prune young trees. We look and there he is, pointing, reaching back to pull imaginary clippers from his pocket and hold them aloft. "Use these!" he says, as he did when he pointed out living proof in trees he'd planted and pruned in the 1930's at the Detroit zoo.

This advice came from the elder of the Brothers Cameron* who explained it as he removed and carefully laid aside his tweed suit coat, signaling serious work ahead.

You can keep a hedge neat by shearing it in spring, giving it another cut a few weeks later and one more in late summer. Each time you remove several inches of new growth, then perform a tedious clean up to extract all the fallen bits. Considerable work of questionable value since the process almost always allows the plant to advance by an inch or so each year, weakens it overall by increasing the ratio of old wood and creates a hollow shape as the shell of the hedge becomes so dense that all new growth from the interior dies out.

Mr. Cameron said, "Cut nine inches from that hedge in spring and be done with it but for a July touch up." And that touch up, he advised, is only needed if the weather prompts a second, uneven growth spurt.

Clean-up is simpler for one-cut gardeners since you simply toss most of the debris clear of the hedge. Work with hand pruners, you create the waste is in chunks in your hand rather than in thousands of shorn bits.

Care to see it applied? This applies to individual (non-hedged) summer blooming and foliage shrubs, too.

*Janet's apologies. At 18 she was still calling all elders "Mr." and Mrs." She never asked the first names of the 70- and 80 year old Brothers Cameron who took her under their wing one summer in Shenley Church End, Buckinghamshire.

Think not thanks for gift plant

It's bad luck to say 'Thank you' for a plant. Say instead, 'How nice of you. I'll think of you whenever I see it.'

We no longer recall who first gave us this advice, as it only truly registered when we heard it for the third or fourth time from senior gardeners. We have found that there is often a strong thread of sense in common lore, and that was the case here.

Here's why we think the alternate phrase is both more true and an important reminder.

First, we have not noticed misfortune following words of gratitude. What we have noticed is that the proposed alternative is usually more appropriate. Consider it as applied to plants that come from others only to run amuck and lead the new gardener a merry chase to evict or control. Also there are those plants that belie the giver's description -- "Is this towering pink flowered thing the one that was supposed to be white and one foot tall?" Also there are the stowaway situations, when viable bits of other root come with the gift, make themselves at home and cause no end of confusion. So when it comes to gift plants, it's true that they are reminders of the giver but thanks may not figure in the big picture.

So say "think" rather than "thank" and make it your cue to recall that a quarantine period is a good idea for gift plants.

Proof of gardening is a perspective useful for gardeners whose accomplishments may not otherwise be recognized or appreciated.

How would I know what goes on out there?! All I know is I hear, "I'm going out in the garden for a while" and then I'm on my own for eight or ten hours!

- Spouse of a gardener, anonymous by request -

A garden often absorbs amazing amounts of material and time without dramatic show. Smart gardeners sometimes leave bundled branches in sight to make it clear that substantial pruning was done. Likewise, empty cell packs, bulb bags and before-after photos all make important statements. Proof of gardening can explain the value of time spent to a family that might otherwise think the laundry or grocery shopping were more worthy pursuits. Where professional garden service is involved, it can head off disputes over a bill.

See Proof of gardening at conifer clip for this lesson as it applied to keeping dwarf evergreens small. 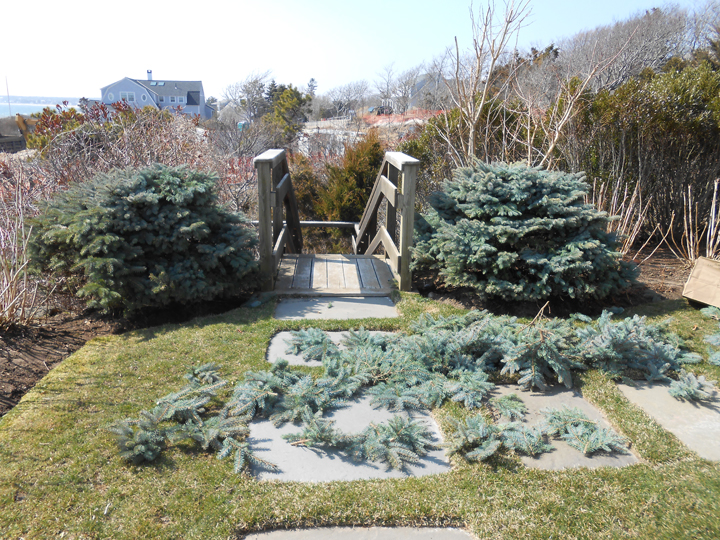 Proof of gardening is the reason these spruce branches are scattered about, and why we photo'd them.

- Mentor Ted Drake opened our eyes to this useful tactic. -

Keep all the water that's given to you.

There are many advantages when you make the most of rain and allow the least run-off into storm drains. The benefits accrue in many places from a water bill to posterity.

To earn those benefits, cultivate an awareness of water as it flows through projects large and small. Route downspouts into purposely created low spots -- rain gardens where water can soak in among wetland species. Change an irrigation schedule so sprinklers run briefly but frequently where the soil is so hard packed that most of the day's ration would flow off site if it was all applied in one go. Install rain barrels. Consider permeable paving so rain and melt water reaches roots rather than running onto the road.

Our thanks for this advice to Curt Pickens, a retired industrial wastewater management engineer with a wealth of water quality and soil science experience. In 1988 we designed and planted his garden then stayed on as his students to the end of his days. We miss you, Curt!

(About that rain garden: Wetland perennials to plant there.)