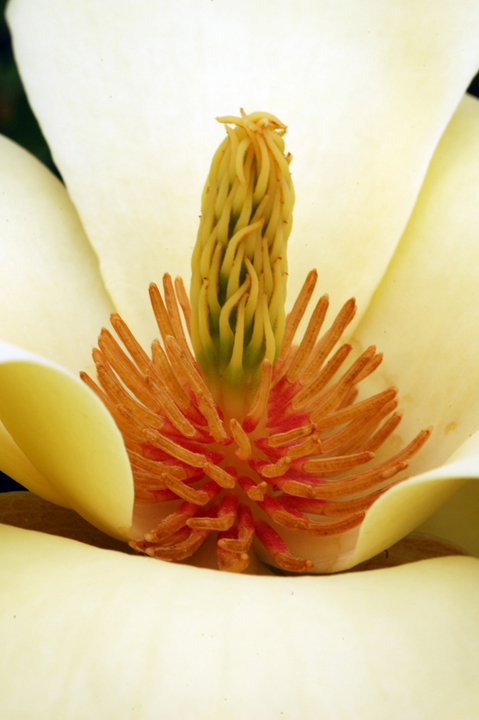 The orange pollen is beginning to ripen on the stamens at the base of the flower, as the prominent central pistils also mature. The tip of each pistil will be sticky when it's ripe, and pollen will adhere there. The fruit will be a many seeded, elongated cluster that gives some magnolias the name "cucumber tree."

Magnolia is among the oldest of the flowering plants and its flower form has changed so little in 100 million years that fossils of that age are immediately recognizable to modern gardeners.

This tree is named sweetbay for the scented flowers (a fragrance which varies with individual trees and ranges from barely noticeable to mildly offensive to sweet lemon and heavy gardenia) and its leaves which are like bay tree leaves (Laurus nobilis) in being narrower than many magnolias.

The flowers bloom over a very long time, often from May to August. Not such a spectacular show as other magnolias since there are a few flowers all the time rather than many all at once.

Also called swamp bay- or swamp magnolia for its occurrence in boggy acid areas in its native range along the U.S. eastern plain and Gulf coast (SE Massachusetts through Florida to east Texas). Hardy to zone 5. More or less evergreen in the warmer part of its range, and taller there; to 50', compared to 20' in the north.