Whyizzit...
...we feel that costly plants shouldn't be cut?

Seems like the more a gardener pays for something the more likely that plant is going to be allowed to run rampant or grow wild.

Prime examples: Japanese maples (Acer palmatum) and other small Asian maple species such as fullmoon maple (Acer japonicum) and paperbark maple (Acer griseum). You might pay two or three times more for these than for similar sized "ordinary" ornamentals such as a crabapples and magnolias. Yet all of the trees may grow equally quickly. The Japanese maple may even have the greater growth rate. 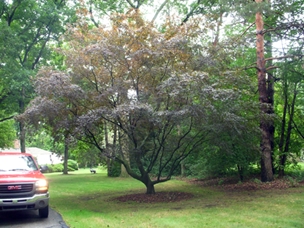 That tree towering over the full sized pick-up is a Japanese maple.

If you value your Japanese maple -- upright "full size" variety or lacy weeper -- prune it regularly so its shape is most pleasing and its size doesn't get away from you. Many varieties will top 20 feet unless they're pruned regularly.

Here's a Japanese maple (right) we prune every two years to keep it from getting any larger than what you see here. It was purchased on sale in a 2 gallon pot at four feet tall about 11 years before this photo was taken. It's a variety similar to the one pictured above. It will reach 20 feet if allowed to grow to its potential.

We pruned it for shape at planting and again after a year. Since then we've pruned it four additional times to restrict its size. We're about to do that again.

(We're also getting it ready to move to another place --thus the digging at its feet to root prune it, but that's a story for another page.) 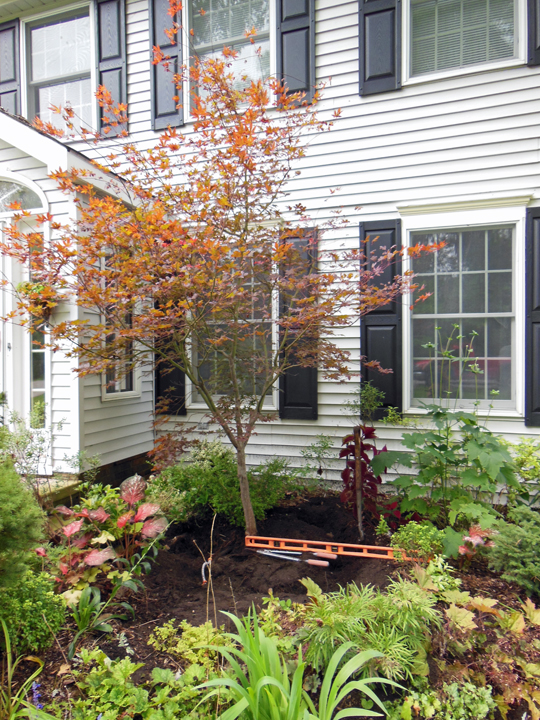 Then we shorten and thin the side branches so that each new leader is at the head of the pack. We'll show you how this is done, using a limb removed from the left side. 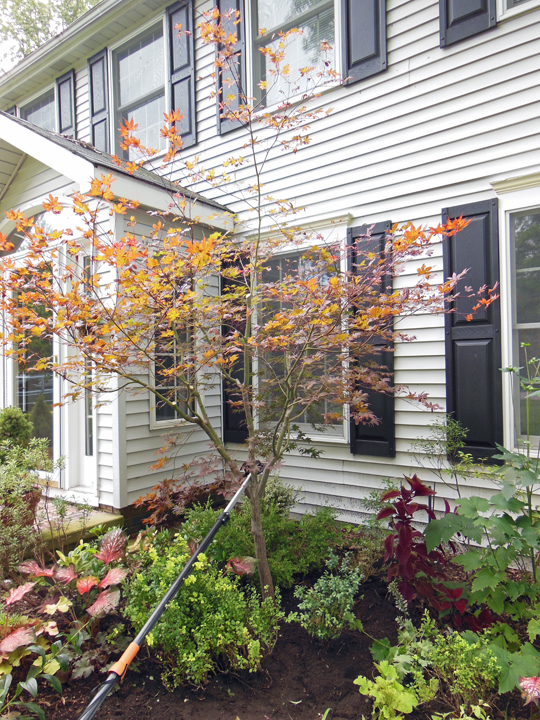 First we shorten all the branches we've designated as main limbs. We cut each one back to a side branch that is growing in the right direction to become a graceful new leader. You can probably see three of the cuts as white stubs in this photo. 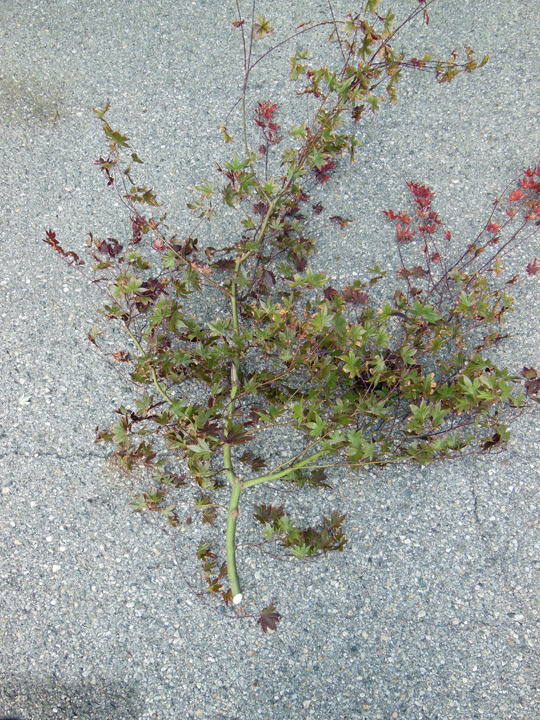 Here's the limb. It's just yard waste now but it is the same size and has the same density as those left on the plant we're pruning. We use it to demonstrate since it's far easier to see what we're doing with it in isolation. 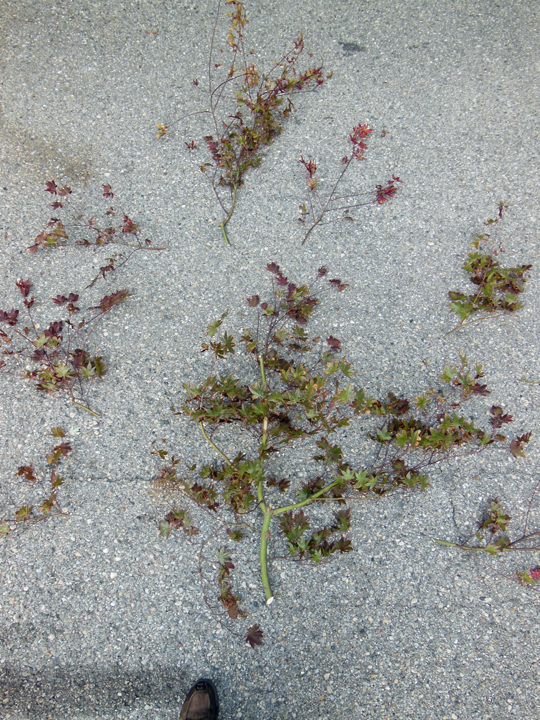 Here is what we remove from such a limb.

Weeping Japanese maples tend to become little more than bushes -- weeping to the ground and so dense that their branching and trunk can't be seen.

The first step in pruning to restrict the size of the green laceleaf Japanese maple shown below, yet keep it tree like, is to remove some excess branches. This selection and thinning process -- what we call pruning for shape -- would have been accomplished more simply when the tree was younger and its branches less tangled and thick. However, it wasn't done so we're sorting out those branches now.

You can learn more about deciding which branches are essential and excess, in Keep a tree small, unabridged, Prune dwarf maples, and Pruning Japanese maples in the spring ensemble issue What's Coming Up142. 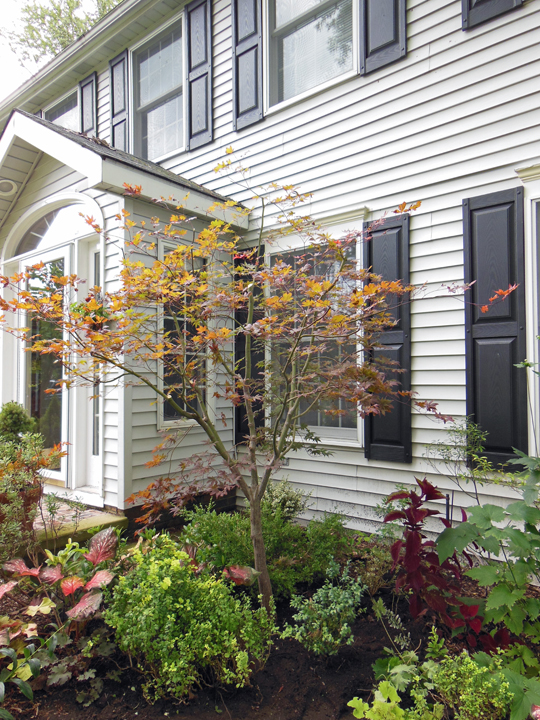 When we're done, the tree looks like this and can grow for two more years before it's time to prune it again. 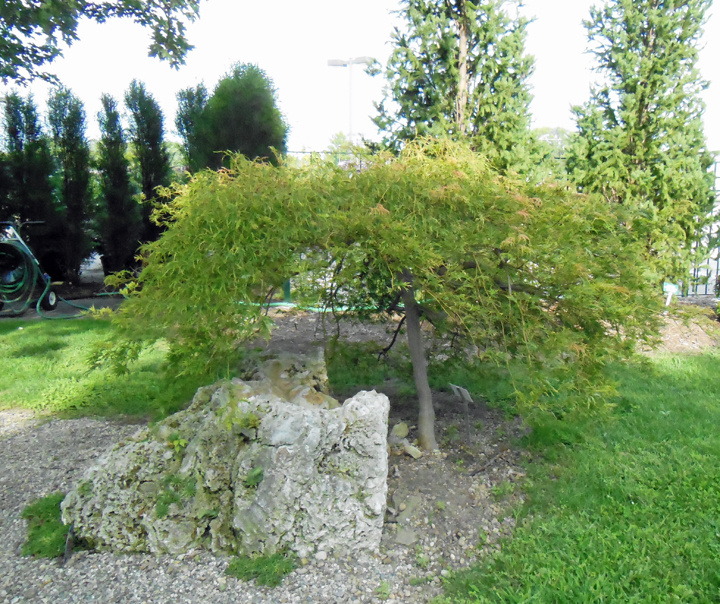 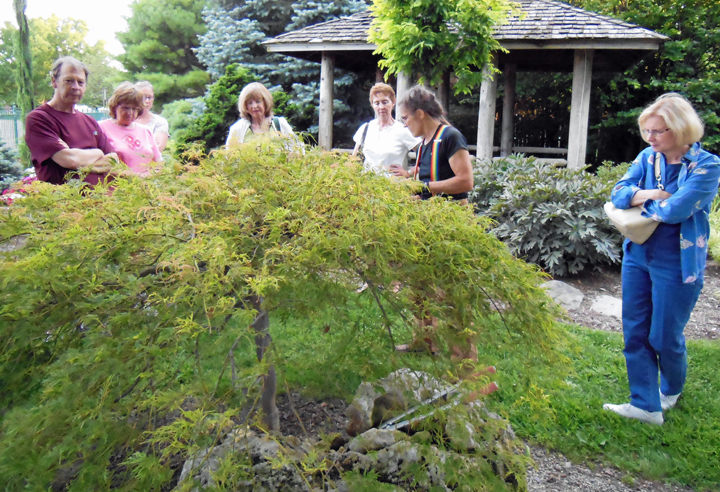 For now, it's enough to say that on such a tree as this the process involves significant hmming and hawing, and crawling under and then back out from under the tree to contemplate from all angles, "What if that limb and all its foliage was gone? 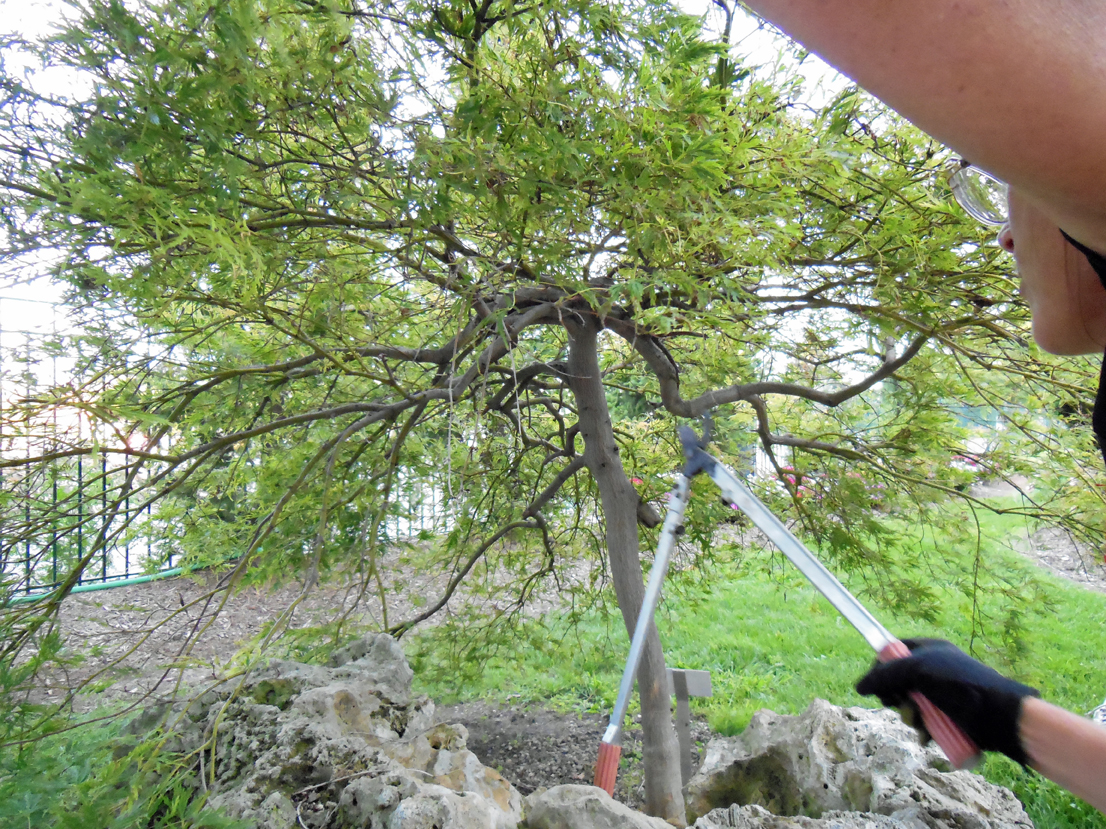 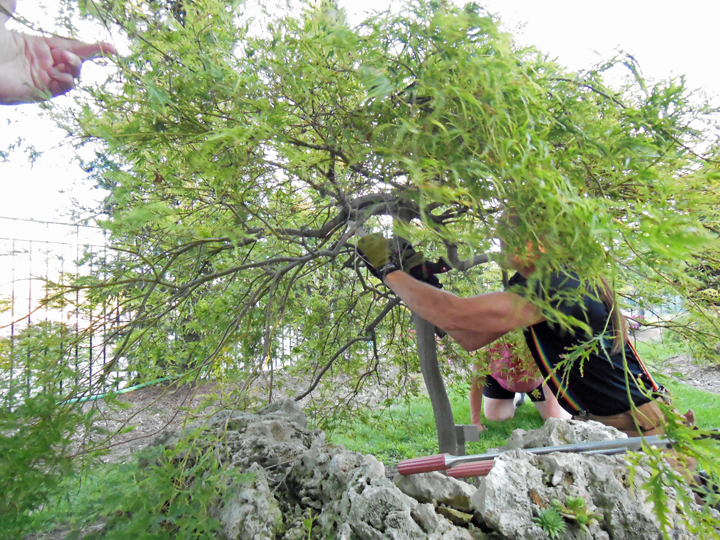 Given observers on the outside, you can save yourself some crawling by wiggling the branch you're considering for removal. 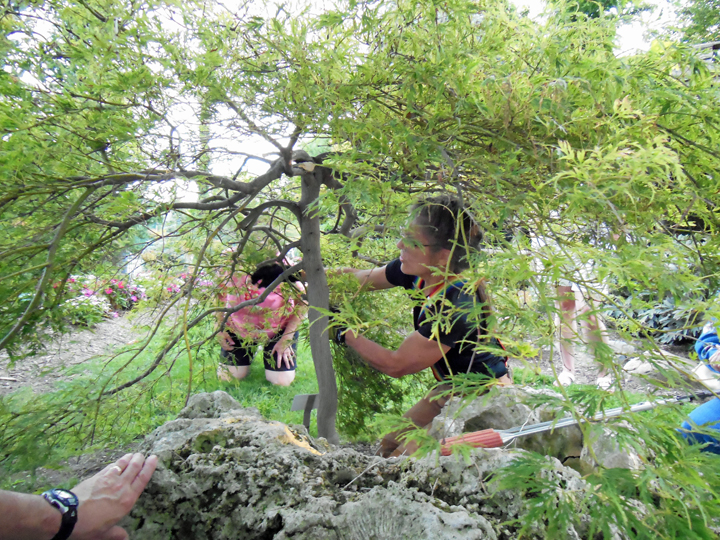 gathering all its foliage in your hands then asking those on the outside, "So all this foliage would be gone. Will we miss it terribly? Will there be an unendurable hole?"

Eventually we crawl in and take at least one limb out. 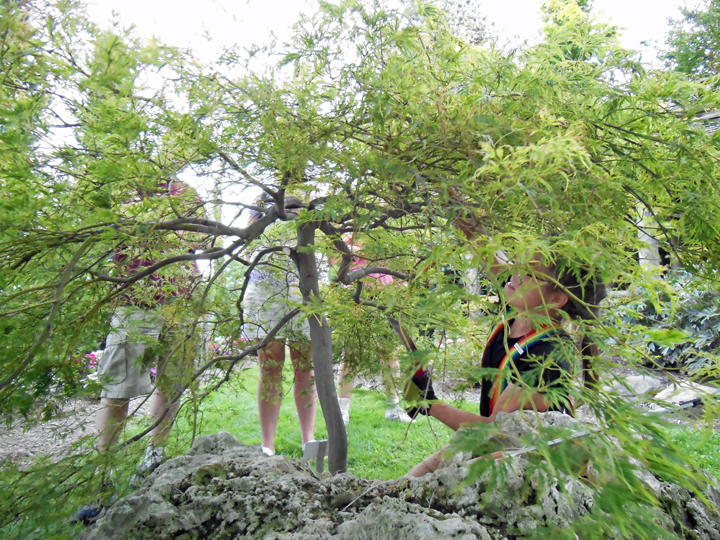 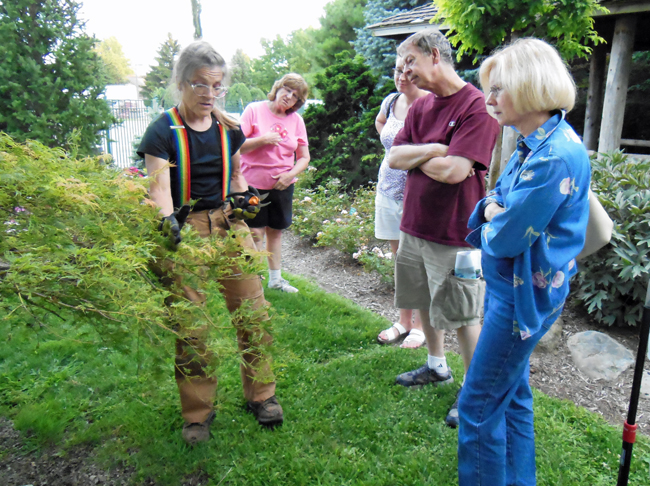 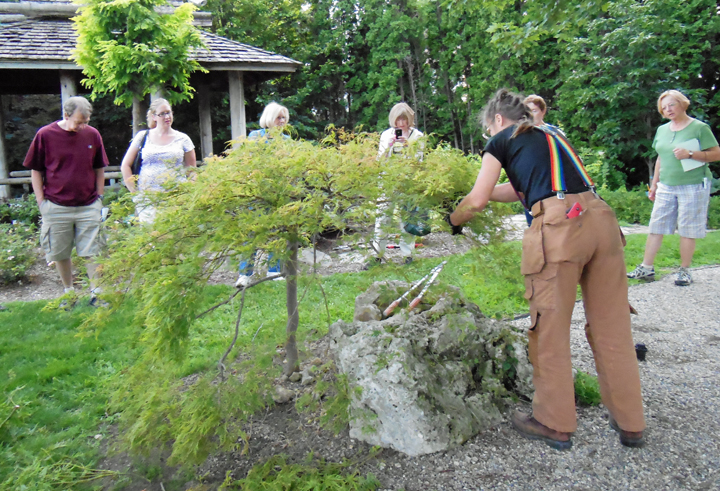 Carolyn Riedel, Nancy, Jim and Katie Ranieri, Gay Norton, Chris Orndorff and Judy Fritzsche assist. Behind the camera, Virginia Bergin did us a great favor by recording the work when Steven was called away. 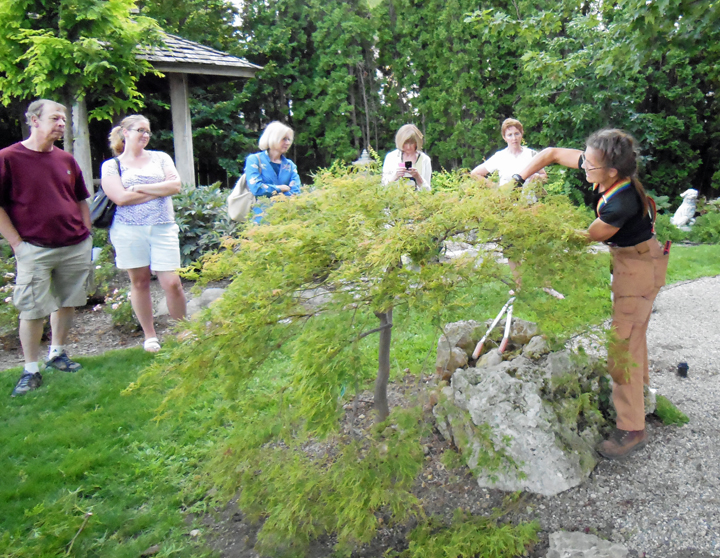 Then we shorten and thin the remaining limbs, starting at the tips and working back through the side branches just as you saw for the upright tree. 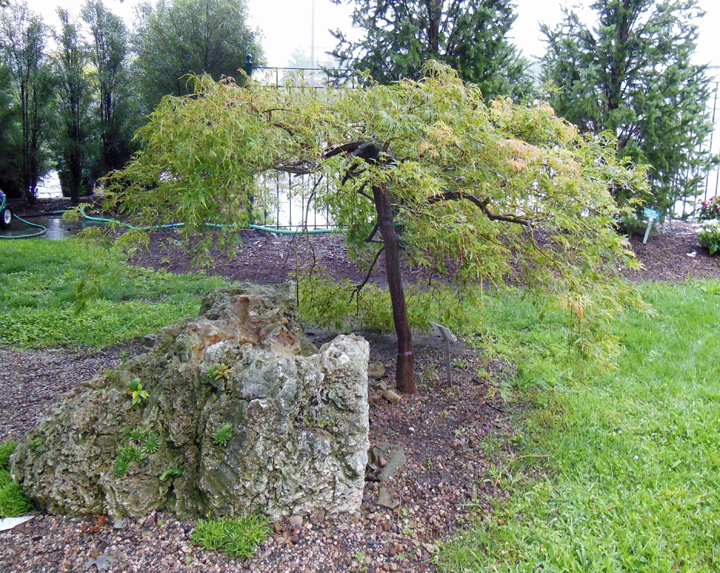