I've spent hours on your site recently. There's just too much when all I need to know is what to do right now. Can I cut a butterfly bush down? Is it too early to fertilize? Should I dig up the overgrown hostas or can I just chop a piece out of each? - J.K. -

All of what we're doing right now

We are doing all of the things listed below, now in earliest spring.

The list is in order for efficiency. We work in this sequence unless time's short. If we have to put a rush on, we skip whole items. 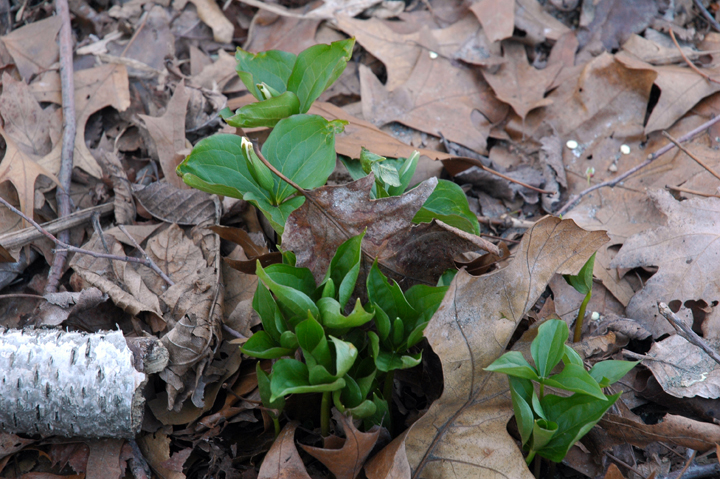 When winter lingers, spring comes late and in a rush. Ground swell becomes earthquake and this trillium will seem to leap out of the ground. Gardening enjoyably and productively during a fast spring requires both luck and organization. Here, we wish you luck, and offer our checklist of what to do right now. We've kept it short and noted the priorities. Click for photos and follow links if you find a bit of breathing space.

Note that most things on the list are optional. We try to do it all but don't cry over options.

For explanations how and why, including "So, what if I don't," two suggestions:

B) Post a question on the Forum where we and about 400 gardeners keep an eye out for each other. Include photos whenever you have them. Somebody/bodies on the Forum can help you with specifics.

Start at the top. If time's short, skip to essentials marked with *

Thin or cut down what was there for winter twig color. Examples: Redtwig dogwood, blue willow, golden willow, Kerria. Take a  look at photos

* 3. Cut out damaged and dead wood

*Cut out damaged and dead wood and shoots. A look at some of what we've found so far: A) So many rabbit chewed and snow-bent canes this winter! B) Hellebores fooled then frozen this January; such a pity. C) Continuing dieback on Japanese maples ravaged by last year's frosts and drought.

*Learn. Notice what's unusual and make notes or photos. Identify the issue when you can so you can treat it wisely. For instance, look at the lilac broom and oak cankers we found while pruning.

6. Prune to thin and shape trees/shrubs

Prune trees/shrubs to thin and shape. Some common shrubs that need this: Lilac, honeysuckle (shrub and vine) and Viburnum.

7. Prune to restrict size of trees/shrubs

Handle debris only once. As it comes to hand, prep it for the first yard waste pick-up or ready it for re-use. Pile clippings neatly to be tied. Bundle a grass or shrub  before you cut, if you're razing it.

Force twigs of spring blooming shrubs in a vase. Change the water daily and keep it in the sun.

12. Rake, but leave the leaves

Rake only to remove gross debris. Leave the leaves! They'll be covered by new growth or decomposed in a few weeks.

Fertilize with a slow release organic product. Especially important where the subsoil is paler than the topsoil.

*Edge: Separate what's in from what's outside a bed, anywhere lawn or another root-spreading colony surrounds a bed. We like to cut an edge on our beds.

*Weed. Lawn or bed, the game is the same. Begin with known hot spots. Forget deterrents such as mulch or pre-emergent weedkiller if the weed's already growing. Dig, smother or kill the likes of: Annual chickweed and corn speedwell that sprout in late fall or winter thaws, or perennials such as sour sorrel and thistle.

*Check water issues: Do a drainage test if you never have. Run sprinklers to reset coverage and timing.

Lift, divide and re-set old and overgrown perennials. Or if time's short, chop and lift only the excess. (Include the old center in what you chop out. Be aware that plant will "migrate" -- end up centered on the remainder.) Discard at least 3/4 of anything overgrown. Add an equal volume of compost or humus-rich soil to the spot. Examples of perennials that need frequent division to remain healthy and attractive: Bee balm, daisy, tall phlox, yarrow, and any variety that reverts or sports to become what it shouldn't be.

Add new plants. Always! Foxtail lily is on some lists this year.

Improve the soil at every chance, with compost to replace organic matter we remove in gardening. Special emphasis on aerating what's been squashed and cushioning to prevent compaction.