You thought they are little? Better learn to prune 'em!

Three factors add up to the conclusion that all Japanese maple owners should learn to prune these beautiful trees.

1) Japanese maples are small trees but bigger than most people expect. So an upright tree that can be 20' tall is placed in a 12' and a "cute little weeper" is planted in a 3'x 3' patio bed although it has the potential to spread 10' or more.

2) Many of these trees also grow 8 to 18" per year, faster than most people expect -- people assume that something expensive is slow growing.

3) Japanese maples are often planted in exposed situations which cause branch dieback. There is almost always dead wood to be removed, and the need to recognize weak wood, then elect and encourage suitable replacement branches. 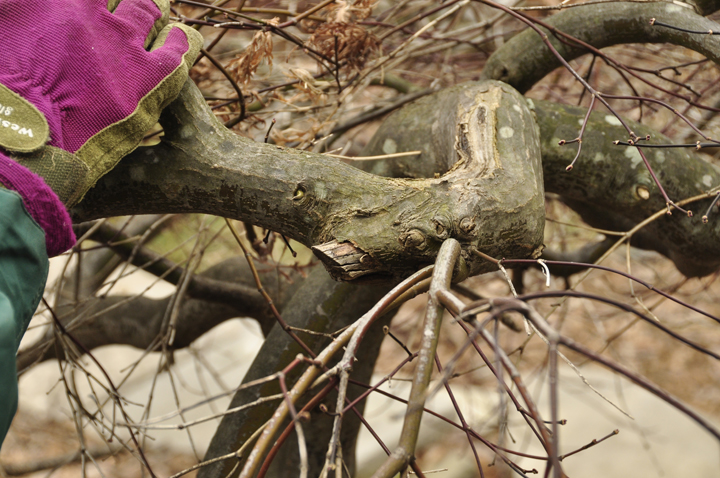 When we see deadwood* as along the top of this Japanese maple branch, we cut out that limb or remove it from consideration as a long-term main limb. Either way we look for another branch to train into the damaged branch's position, and try to alleviate the winter exposure** that's causing this problem.

*Notice the dead stub left remaining from
some past, ill-advised cut? Here are
good reasons to avoid leaving stubs
as you prune! 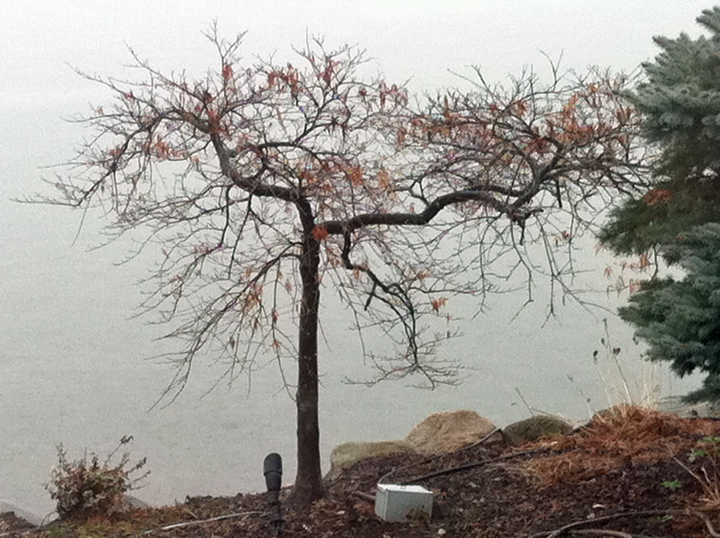 Looking for this tree? The photos and notes here came from pruning the Japanese maple in Dwarfs cut to size plus two others on that property. All were treated similarly since all three are dwarf weeping forms which had accumulated deadwood, need to be restricted to smaller spaces than they could fill, and are fast growing. Since the light was poor for photos around the lakeside tree from Dwarfs cut to size we're showing you its similar neighbors, instead. (Sorry, troopers! You know we garden for a living and do this writing as a side. Can't forgo garden work to wait for light!) 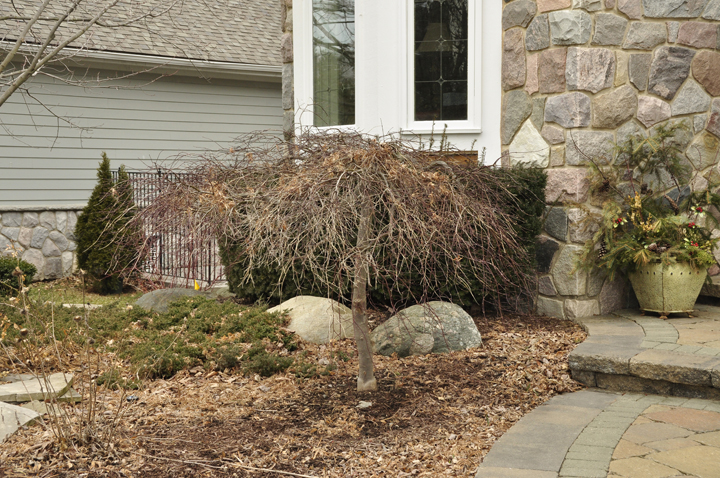 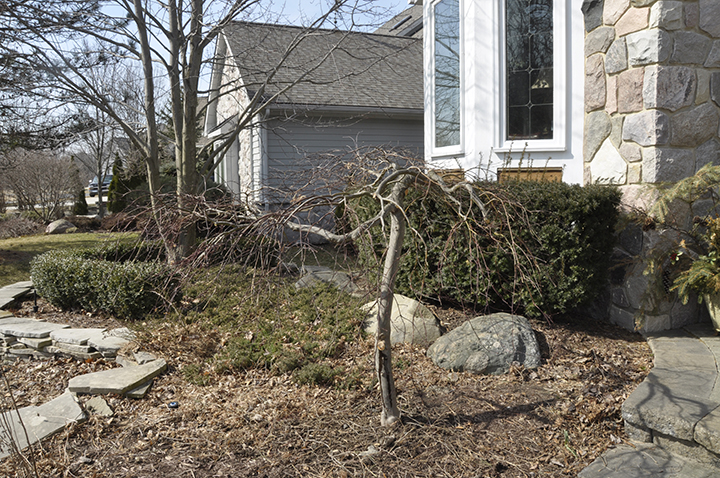 Our goals were: To keep the tree within a 5' x 5' space so it will not block the walkway. To create a more graceful form since its bare limbs are on stage right outside the front door for four months each year.

This is the tree whose damaged limb is shown close up at the top of this page. Some people are surprised that a tree close to a building has more exposure damage than one out by the road. That's the case here, where two of four Japanese maples on the property are within a few feet of the building, two are more out in the open. Those near the building had the worst damage, probably because those spaces near the building warm up more on a winter day so the harmful drop in temperature at sunset is even more precipitous.

And now, the "during"

We start out under a weeping tree because we can usually see the branching pattern better, there. 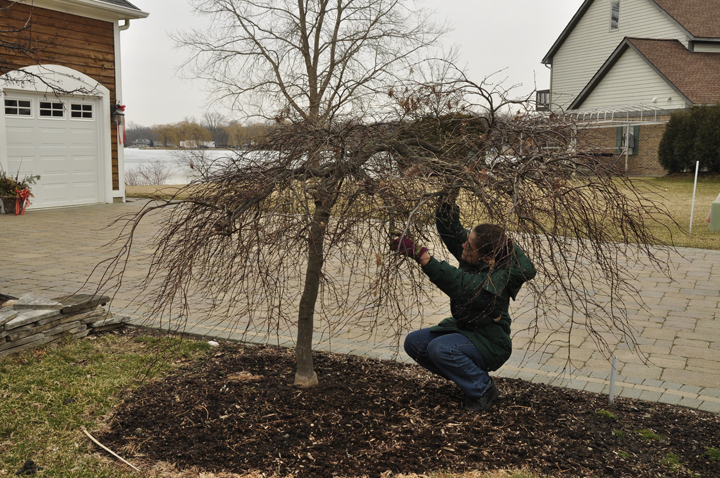 For instance, we had this exchange at this point: Janet, under the tree, "And we'll have to take this one out, right here." Steven, a few feet away, "Whatever you say, I can't see it or show it from here!" 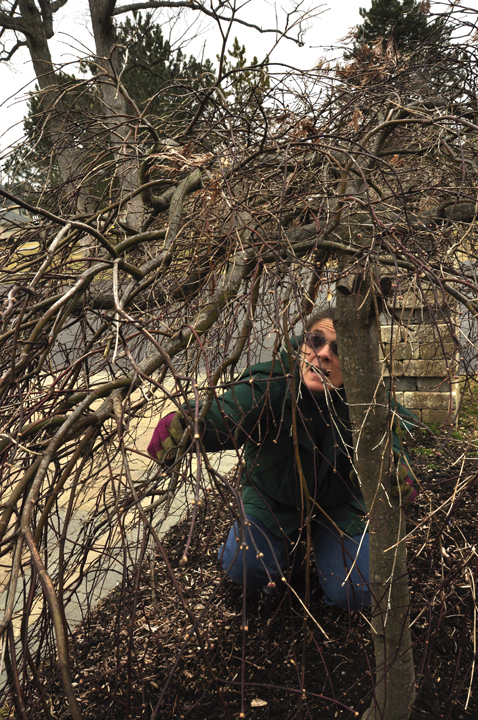 What Steven could see ... 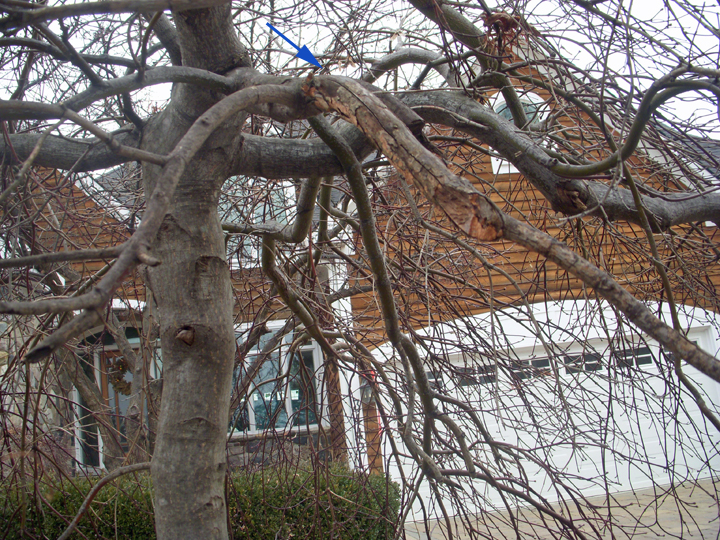 ...and what Janet saw (deadwood) 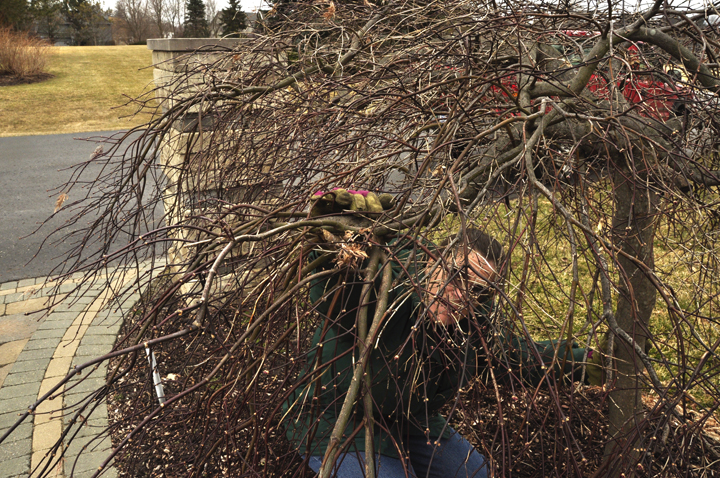 From outside the tree's canopy Steven could see the awkward, spider-like cluster of branches that had developed over years at the end of a branch repeatedly lopped off at the same point -- its punishment for straying over the driveway. 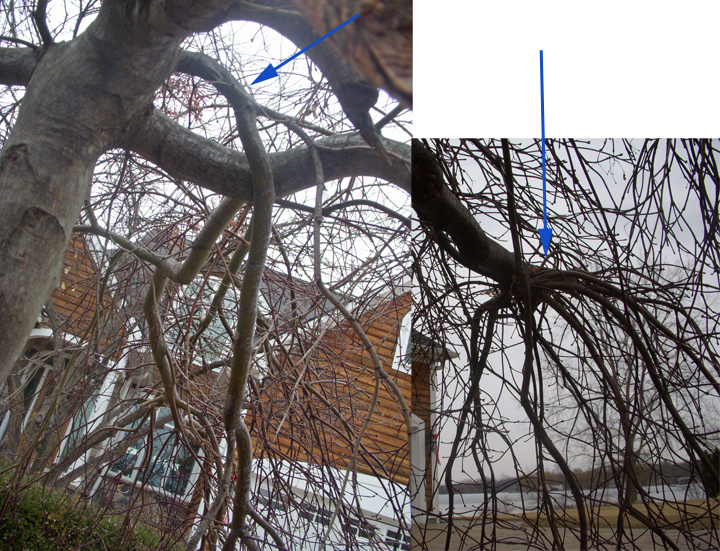 From below, Janet could see that the whole limb (right arrow in this composite image) could be removed without creating a gap, as a replacement limb (left arrow) is already in position.

We removed the deadwood, sawing to leave only the collar. No stubs! 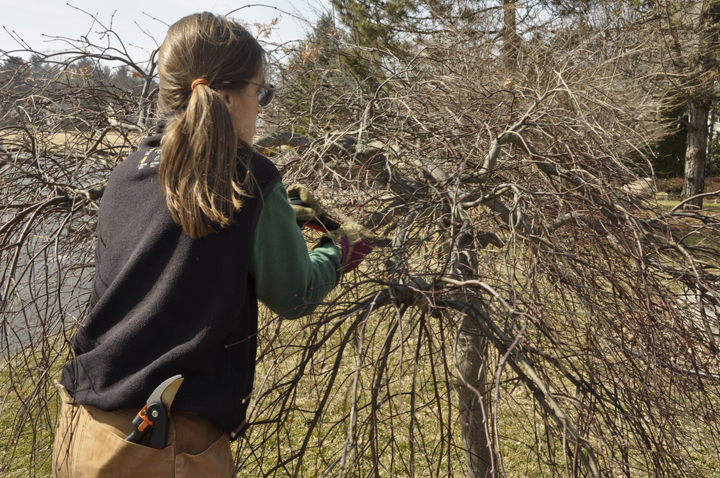 We took out the branch that had been deformed by uninformed lopping. 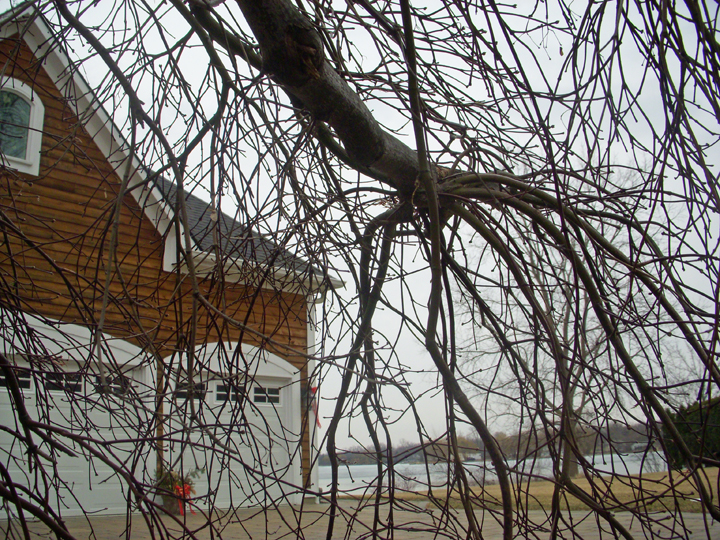 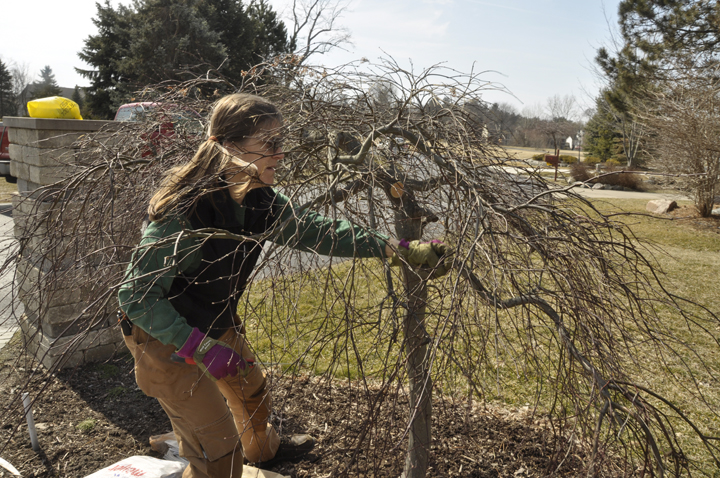 There it goes, out and not missed.

Then we addressed each branch we'd elected as primary -- 4 spokes from the trunk that will be "keepers" because they're graceful, healthy and each one fills a distinct portion of the canopy. We went to the end of each of those limbs and shortened it by two years' growth. Then we worked back toward the trunk, shortening each main limbs' side branches by two years, also. 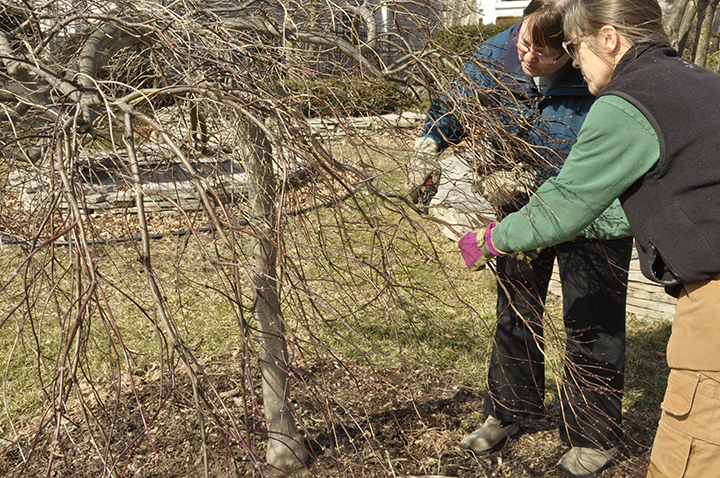 Janet's holding the branch she's shortening. (Detail.) She'll clip to just below a side branch above her hand. Overall, the main branch ends about 15" short of where it was. The tree's exhibited an 8-10" growth rate. 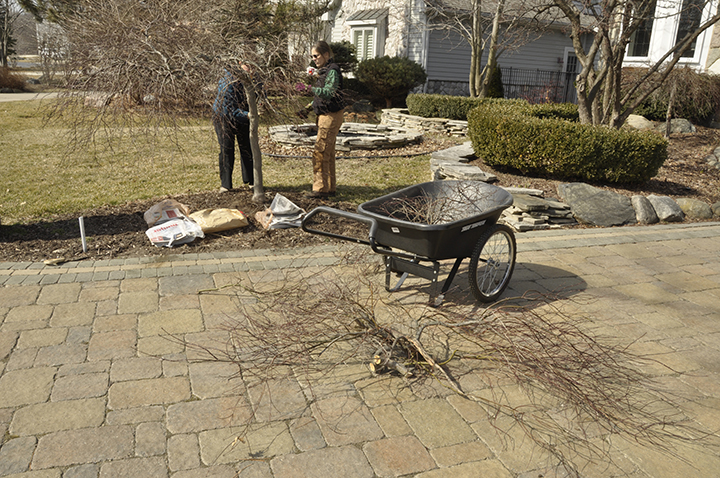 That's Barb Sturtz with Janet, who called us in to sort out these trees. She is fun to work with -- learns quickly and has no fear! Between the two of them the pruning went quickly and generated a lot of clippings.

So here's the before and after.

Compare them to see that we shortened and thinned the drapery. Something we can't show, given the available lighting and background: We changed the canopy as seen from a bird's eye view. What was a rough circle is now an oval that's longest along the axis parallel to the pavement.

By the way: If you dislike the shape we created, that's fine. There is no one right way to prune for aesthetics! 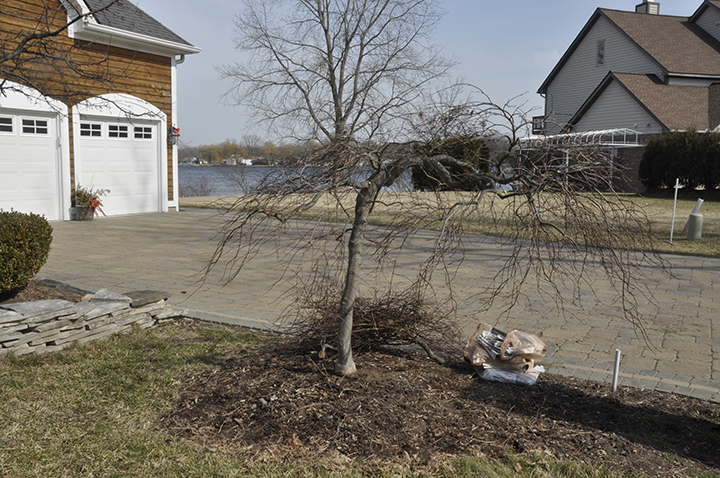