We love to learn by doing

If you like hands-on, too, come watch us and try your hand at techniques from "In our gardens" at one of our free Garden by Janet & Steven sessions. These events are chances to shear, best your fear, even just walk and talk. You can join us whenever our calendar and yours align. 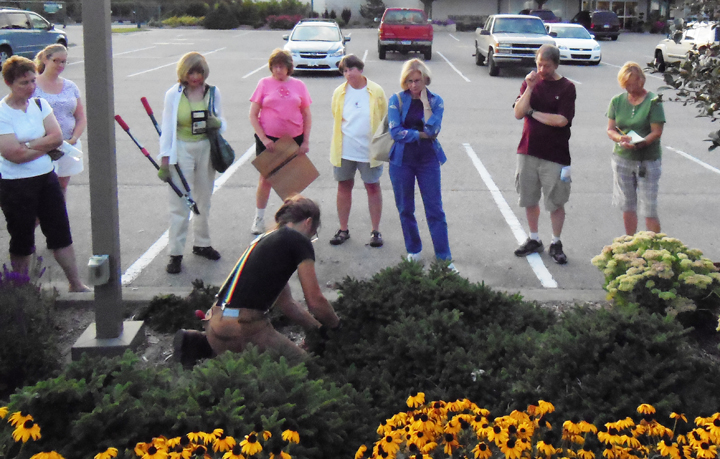 Students of pruning observe the shrinking of a birdsnest spruce.

Shear then pat and clip

That's the kind of thing people do when they come to a pruning session of Garden By Janet & Steven. They let their hands learn. For instance, those in the photo at right were learning to clip a birdsnest spruce to keep it small. This included patting the dwarf spruce after its initial reduction, feeling for the most thickly-branched tips, then cutting out those stubs.

That thinned the surface, letting light in to promotemore leaves (needles)  well into the shrub's center.

If it is repeatedly sheared at about the same level, a plant becomes little more than a shell of crowded branch tips -- twigs that are relatively weak because of their high wood-to-leaf ratio. That dense layer of twigs also blocks light to the plant's center, killing foliage that could keep the plant more dense and vigorous. 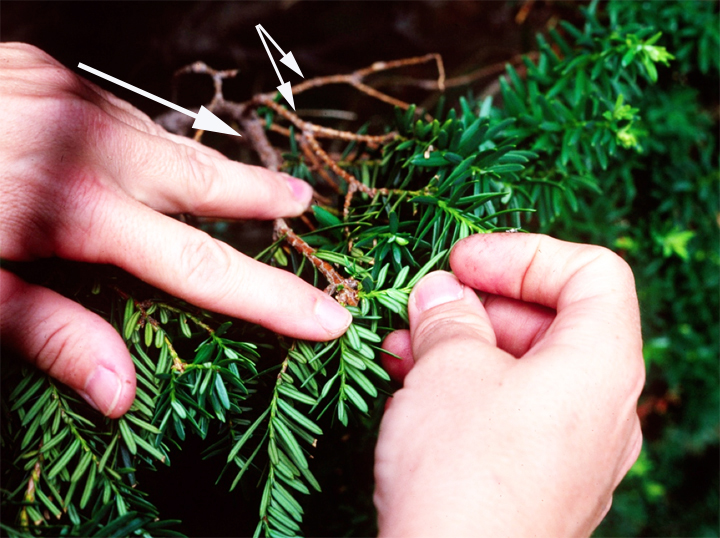 When sheared, the plant branches right there. If these yew tips are sheared again, the space now occupied by three or four twigs will be crammed with eight or more, all vying for the same light space.

So we pat the surface after we shear to find the branches that have been shorn the most times. We feel for those that have become most branched/least flexible. We cut those off several inches into the plant. (We might clip the largest twig in the photo above, cutting it out at the tip of the large arrow.  That provides smaller twigs a chance to grow -- those twigs marked by smaller arrows. )

Yes, these cuts create little gaps in the plant's surface but since greenery is always coming from below the holes won't show and the plant is healthier.

There is more about this in Restriction pruning, with specific examples in articles such as Prune a mugo, Shag cut for low juniper and others quickly found via Search. 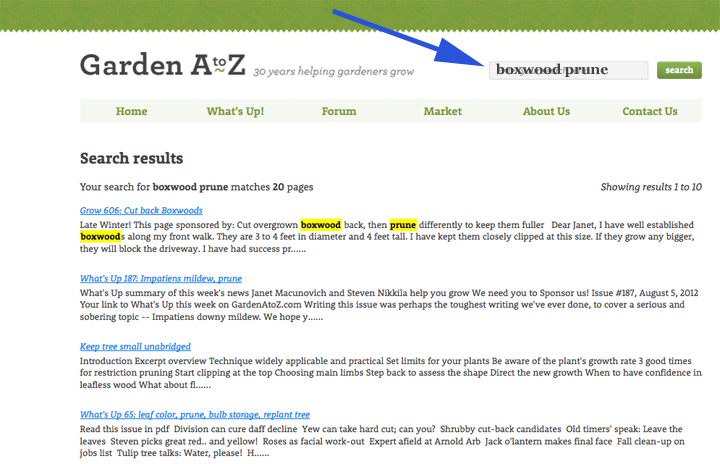 Looking for how to prune a (your plant choice here)? Enter that plant name along with the word prune in our Search field.

See "what comes next" to transcend the fear of cutting

It's like a hair cut -- what we prune out will grow back, even on a Japanese maple. Yet we know that even when the cuts are made during a workshop, to plants for which you will not be held accountable, you will still want to see the outcome. So we schedule Garden by Janet & Steven sessions at gardens that are visible from a public way. You can come back later and see how the patient is doing.

In this session we crouched together under a green laceleaf Japanese maple at Ray Wiegand's Nursery's display gardens. It's the best way to see which branches are keepers, which are redundant, crossing or unattractive... and take them out. (Our special thanks to Virginia Bergin who agreed to watch through a camera lens so we could have some photos when Janet was solo.)

Sometimes we just walk and talk to learn

At the Toledo Botanical Garden for a Garden by Janet & Stevenwe met with six others to explore the property, especially the big shade garden and the hedge-enclosed perennial beds.

Some were there to shoot with Steven, so talk of "what's this flower" alternated with "What light setting are you using?"

All eyes and cameras tended to come together over the late summer bloomers, such as this native North American perennial called burnet, Sanguisorba canadensis. 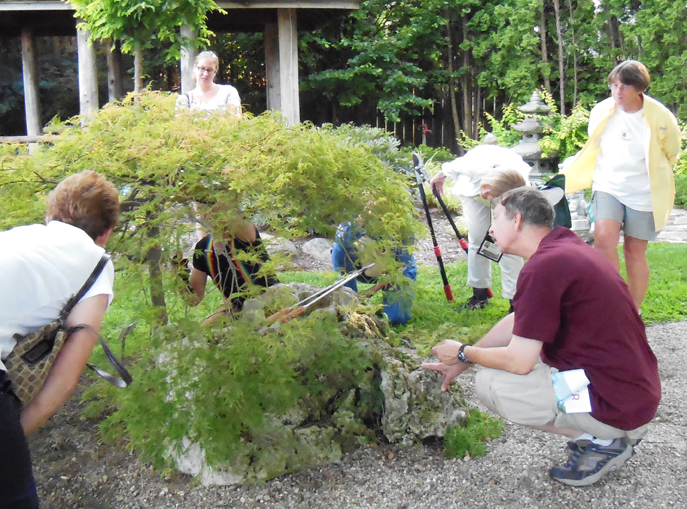 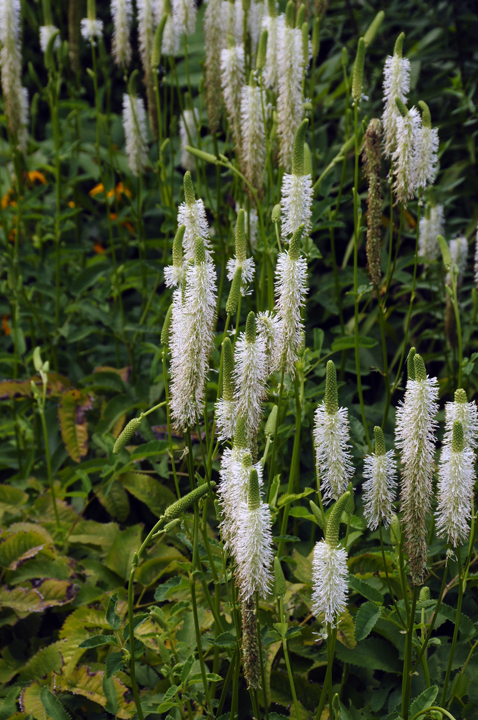 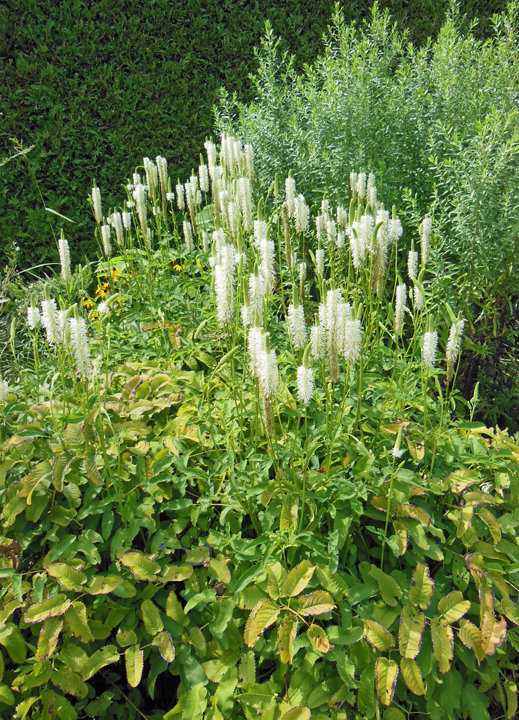 versus Janet's point and shoot (right) -- no contest!

Yet both photos capture not only the bloom but the effects of summer drought and extreme heat in the scorched foliage still being grown over. Both photos also failed together, in that neither one included a caterpillar-eaten false indigo (Baptisia australis) just to the right. Turns out almost everyone in the party had noticed this trouble on what is normally a pest free plant. (The culprits? Probably Genista broom moth -- more on that at the Forum.)

So come join us

Almost any week of the year you can check our calendar, choose one of our Garden By Janet & Steven sessions and come garden with us or observe. No charge. No strings. We know we all learn better through hands on experience, so we invite you to our work sites when we can. We strive to write and illustrate clearly from real life gardening. Having you there to see, touch and tell us how it comes across to you does us a world of good.

On our calendar, we post the opportunity and the kind of work we'll be doing.

You can bring tools and help out, or just observe as you wish. All we ask is that you let us know you intend to come and give us a telephone number where we can reach you with the kinds of last minute changes outdoor work sometimes entails.

To arrange your own Garden by Janet & Steven session

Sometimes those who attend ask, "Could we do this in my garden?" There's more on arranging that service in About Us: Services: Barn raisings and workshops 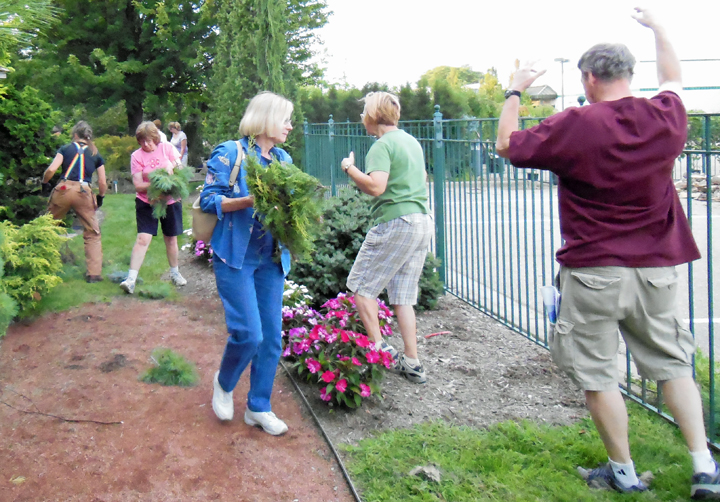 We offer free workshops to share what we know, but we don't deny there are perks in it for us, like many hands making light work if people choose to help drag and bag prunings. Here, Carolyn Reidel, Jim Ranieri, Judy Fritzsche and Nancy Ranieri manned the over-the-fence end of a branch brigade when we pruned at Ray Wiegand's Nursery's fabulous display gardens.