Unless you have infinite space for houseplants, they must be cut from time to time to restrict their size. Many also have potential for exquisite form if you shape and train them.

Bonus: Another kind of cutting, to start new plants... for friends! Remember you have enough!

So learn to cut!

Early spring is a great time to do this because longer days have spurred new growth. Plants will very quickly fill any voids or follow your lead.

Time to cut back houseplants so they fill out with fresh new foliage. Also a great time to shape a young plant by thinning or pinching its new shoots. 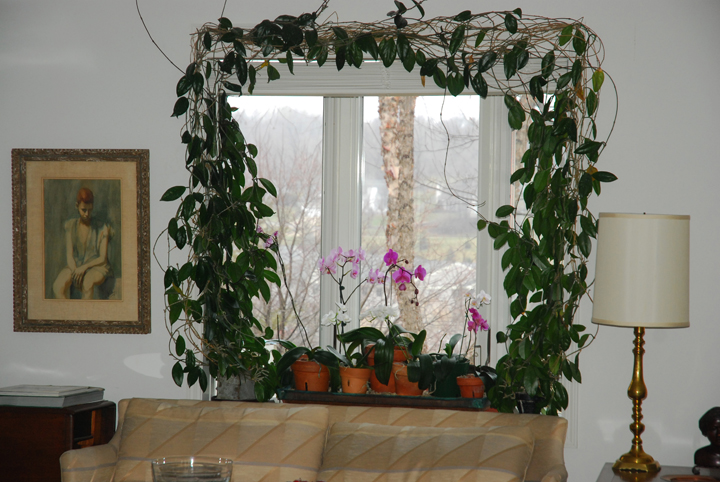 Reader M.O. had to move these hoya plants when she helped her mother move to a new apartment. The simple way to do them would have been to cut them back and then re-train them as spring drives new growth. However, it would take more than one year to re-frame a window. So in a real labor of love, "We un-twined and coiled every branch and moved them intact!" 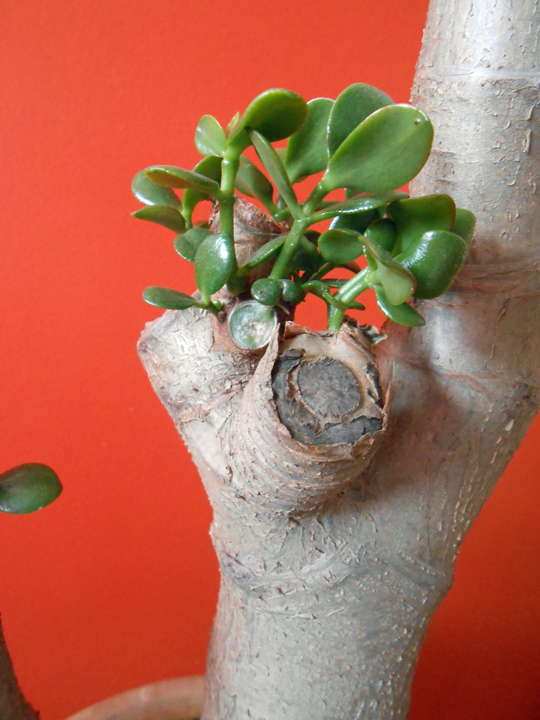 Time to thin the new growth that's come after last fall's cutting back of this old jade. Each of those shoots will be its own big branch one day and we don't need so many. We clip some out now so the remainder have all the room and all the plant's resources during spring's strong growth period. 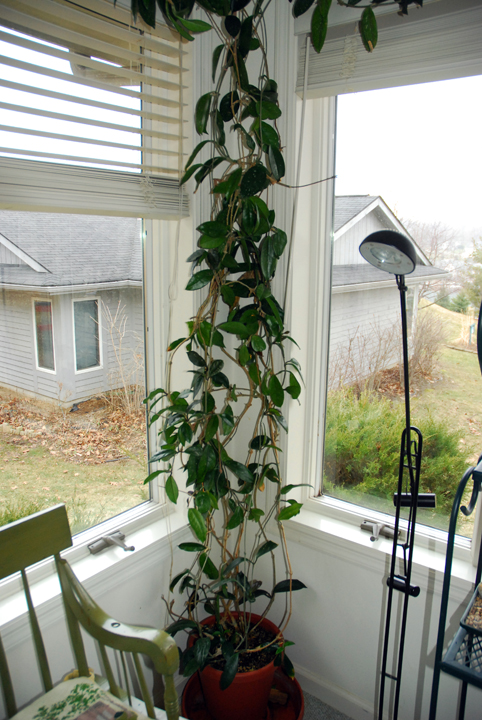 Yes, this hoya would grow back, even if cut hard like theTradescantia we use as an example for the rest of this article.

Cleaned, then cut to remain the same size

This little spiderwort (Tradescantia 'zebrina') is as cute on the windowsill over the kitchen sink as it is here on the work table. However, it's in need of deadleafing now that new growth is claiming stored nutrients from older leaves. Also, we want it to remain a size that fits on the windowsill. So now as spring spurs its growth we'll ask it to make new arms rather than reach farther with what it already has. 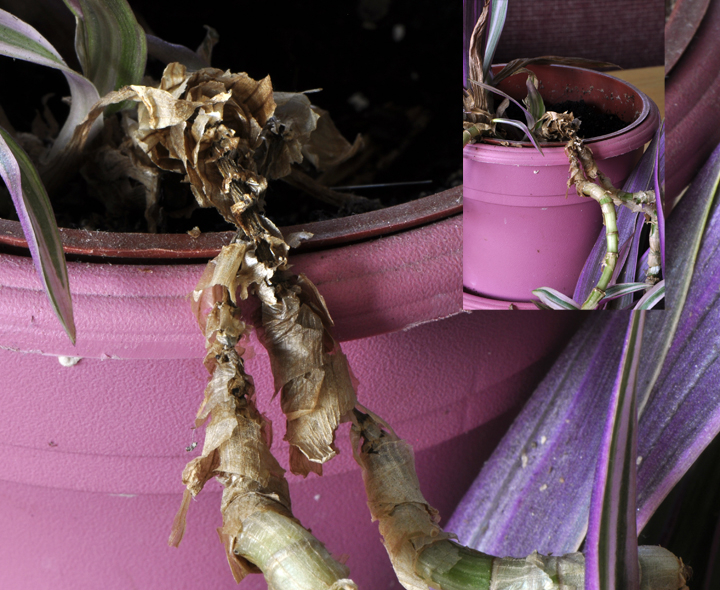 We didn't notice until we deadleafed that one branch has been damaged. 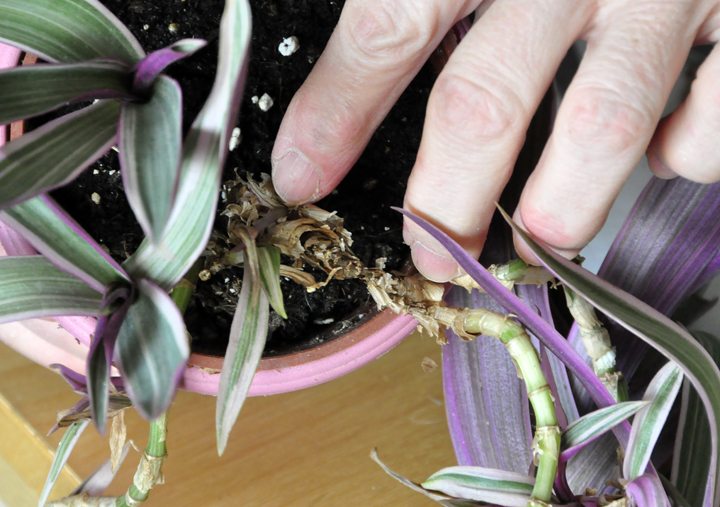 The growth from that entire shoot is weak.

We cut back its better arm, too, because we want new growth to begin from within the pot. If we leave any of the arm in place the new growth will begin from its tip.

Cuttings as a bonus of cutting 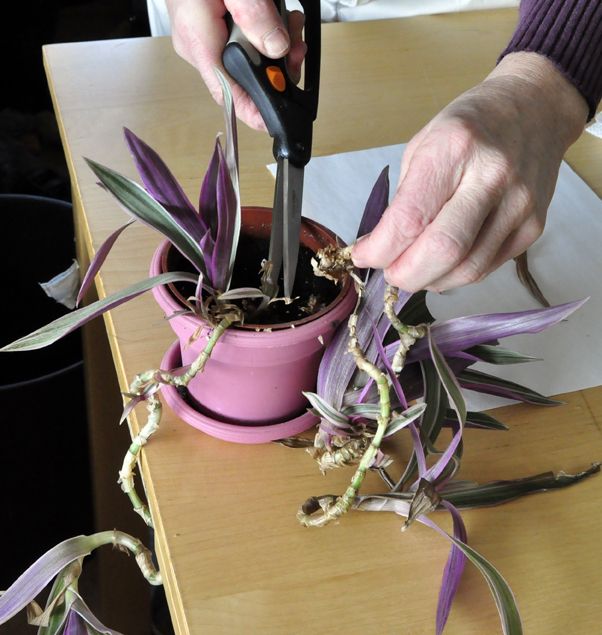 So we cut it all off, the whole bad stem right back to its one good sprout. 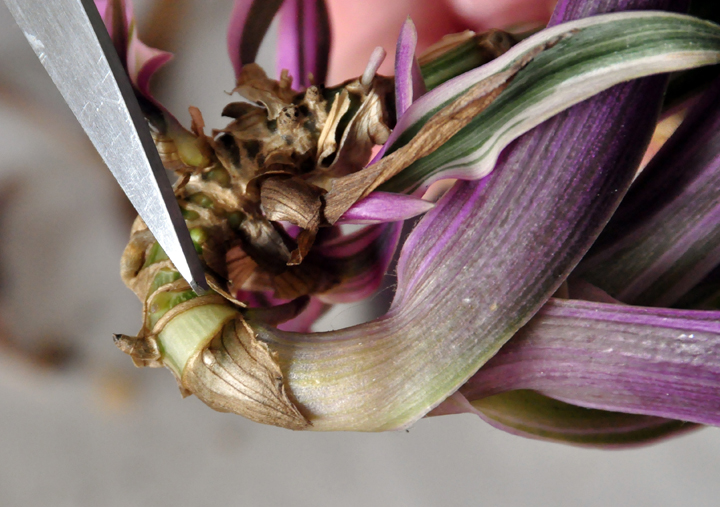 That damaged stem had been growing as a self-made cutting, disconnected from the plant's root system. The moisture it needed came via adventitious roots from this portion. Adventitious roots are roots arising in an unlikely place, such as from stems above ground.

The small bumps on this stem are very effective adventitious roots. (See them, above? The white "wart" below the scissor tip and the longer, brown-er wart the the left of the scissor tip.) Those roots developed in the moisture of condensation on the window and metal sill.

So we could make a new plant of this liveliest bit from our clipping. (It's separated from the chaff, positioned forward and right in the photo below, right.) It could become a gift plant.

Just set it into its own pot. Rest it on a slight depression in the potting mix, anchor it there between a couple of popsicle sticks and keep it barely moist while its root buds elongate.

There you have it!

Before and after... in a month or two it will have reclaimed all its former space with healthy new branches, and beg clipping again.