We tend to press the limits and this year our jade trees suffered as a result.

We left them out too long into the fall -- they were too cold for too long one night. The following morning we noted the leaves were dark and watery. Imagine lettuce gone old or impatiens thinned out after the first frost (below). That's what we saw.

Here's what we learned, and did. 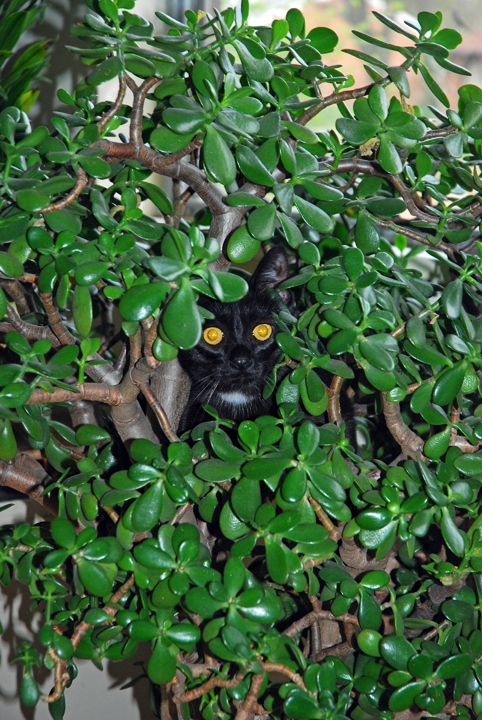 Oh so sorry, Olive kitty! Your jade jungle's taken a hit but it'll be back.

Tender impatiens teaches us the signs 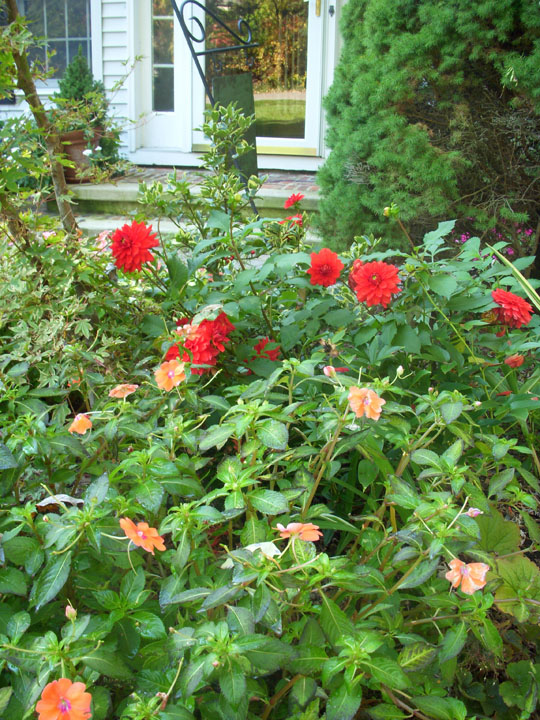 Impatiens still might pass a cursory inspection after the first frost... 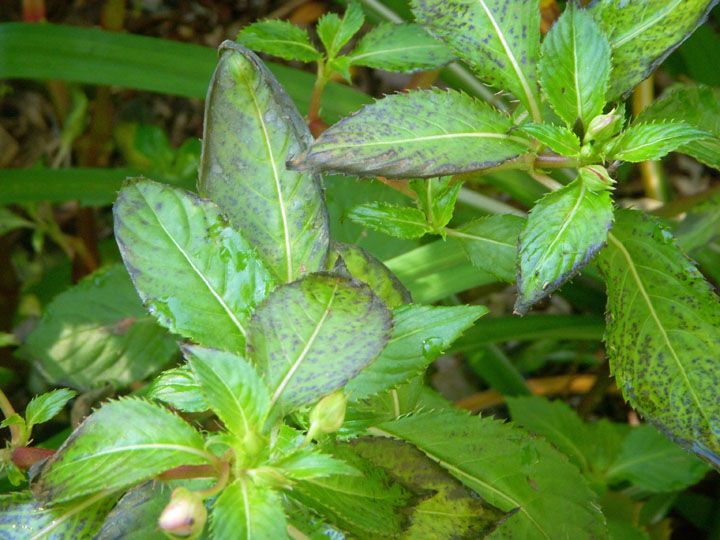 ...but look closer and you'll see water-soaked dark spots on the leaves where cells iced and burst. 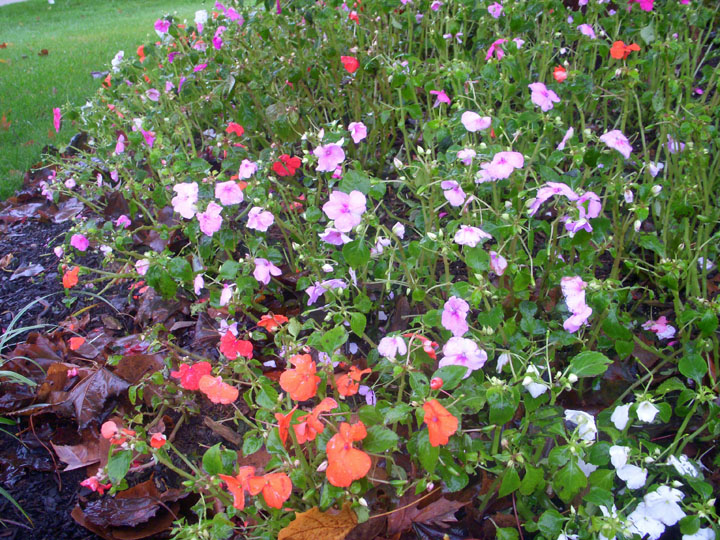 Sometimes cold damage can be almost pretty. Many hostas gradually change color in fall until one night when the cold finally penetrates to the leaf bases. The cells there ice up, burst and the next morning the hosta's a heap. Color change ends because the leaves have been effectively cut off.

After the second hit, so many leaves have been lost that it's just a stemmy mass. All that's left are the lower leaves that were protected by their fallen comrades.

Jade can take more cold than an impatiens, but a limit's a limit. In this case, both our jades were under cover of the porch roof, one closer to the open air than the other. One looked like it would lose all its outer foliage but keep the interior and lower leaves. The plant more exposed to the night air, had damage on all its leaves. That meant its branches had taken a hit, too.

It can be hard to tell right way when a jade's branches die. We just hoped the trunk hadn't been hurt.

(Just how much cold can a houseplant take?
Say thanks to a fellow reader who Sponsored us to
help us post Growing Concerns 680.
It lists minimum temperatures for
major indoor plants.)

Symptoms are subtle at first

Where's the picture? No use taking one. In the overall, they still looked okay. What we saw was the off color of the foliage, and that they felt less firm. 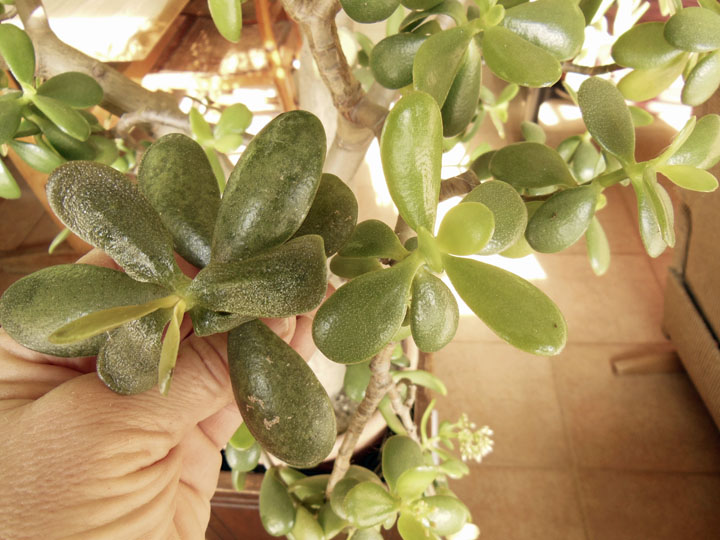 On the left in this picture, a branch with cold-damaged leaves. On the right, survivors. 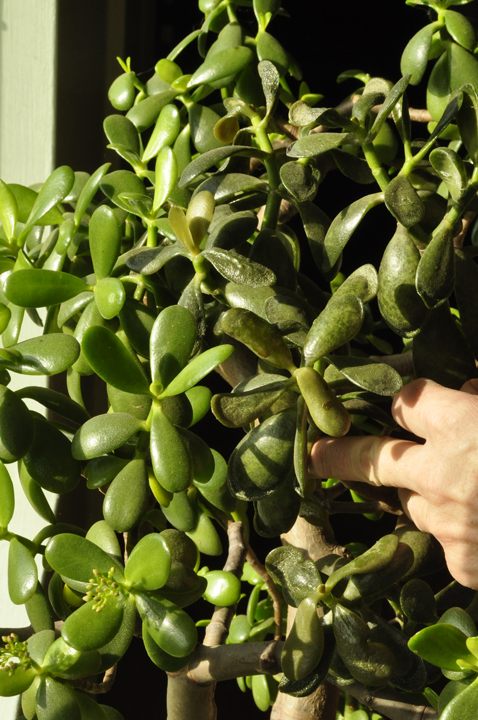 The plant that had a bit more shelter than its unfortunate buddy -- in fact, its companion's canopy had been part of its protection -- stayed that critical degree or two warmer. That was enough that many of its inner leaves survived where the tree's
own outer layer of leaves trapped some warm air.

Drastic measures:
No saving that limb 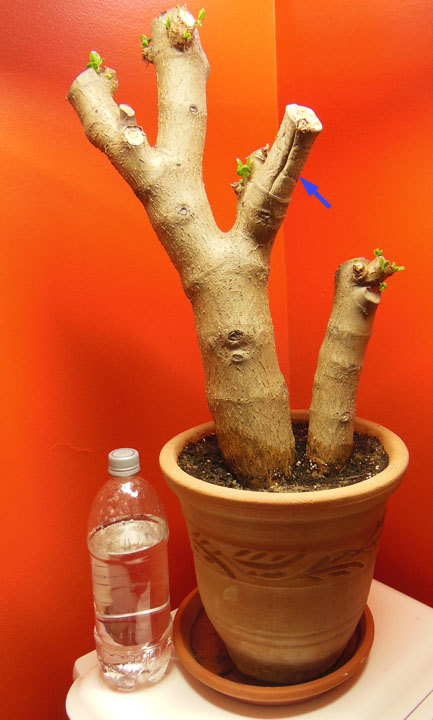 Here is what we mean about not being able to see the damage to jade branches right away. When we cut back, we were guessing how far the cold had penetrated the crown. Now it's clear that we missed one branch. There's a crease on the limb (arrow) that has no sprouts. That's developed as it's begun to pucker. It's drying, having been cut off internally. It would eventually wither away. We'll cut it back. 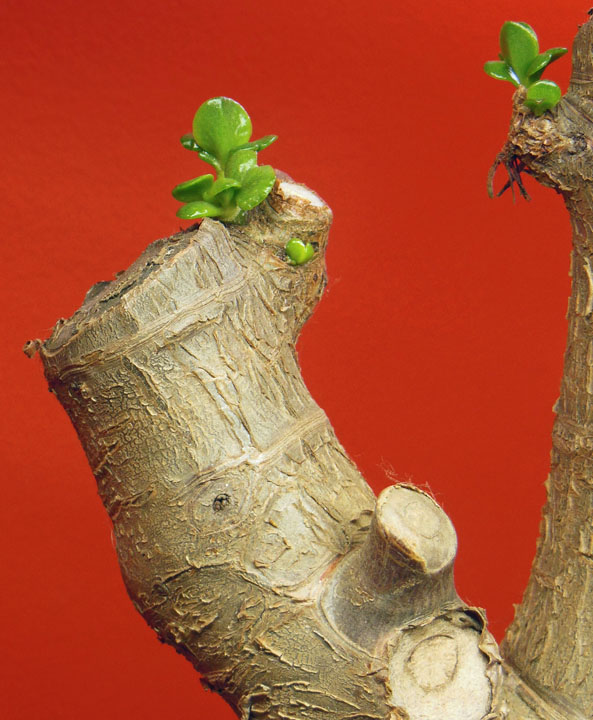 We cut them back -- this one severely. That was 4 weeks ago. We crossed our fingers. Both are now recovering, pushing out new shoots.

It will be a year before they're back to cat-hosting status, though. Sorry, Olive! (Click Water, fertilize indoors in March in the links at the bottom of this screen, to follow this jade's progress.)