It's what's deep down that counts

Last week we helped dig to make a vegetable garden in a back yard in Guelph, Ontario. A tough situation with several possible solutions, all followed by our answer, and the resulting fun. With an August report on how it came out.

The gardener had stripped off the sod, dug in to check the drainage and become discouraged after finding a rocky layer about ten inches down. 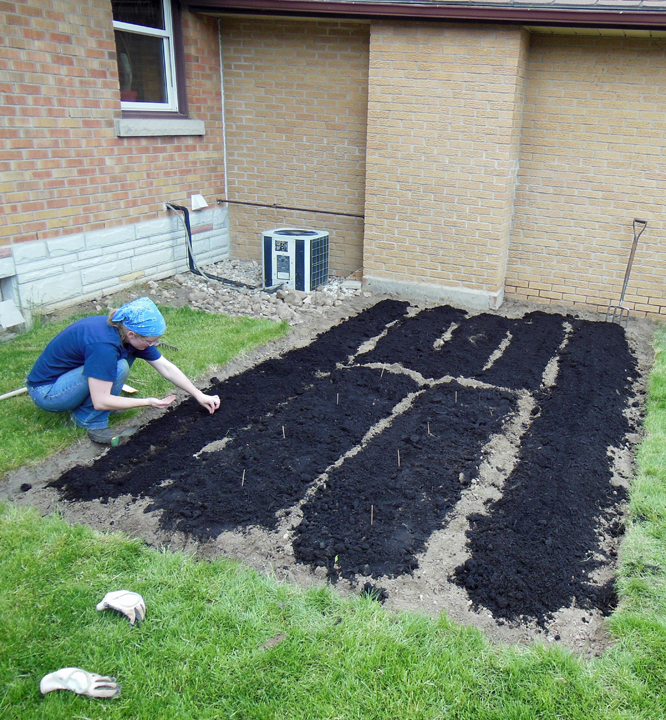 This is a rocky story but it has a good ending, here being pressed into a layer of composted manure! 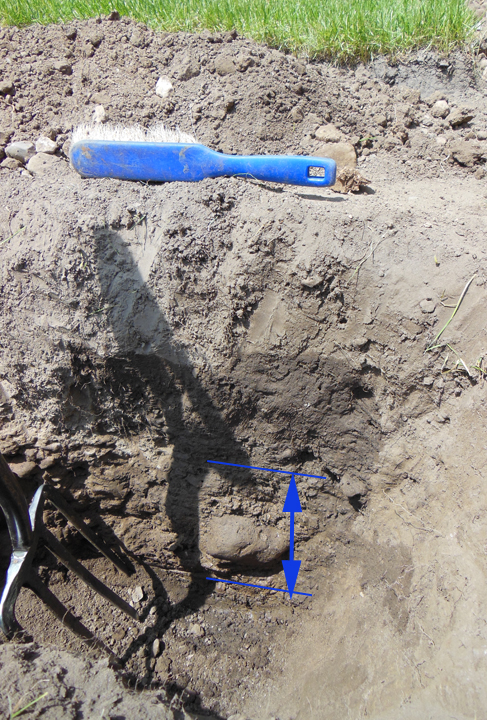 Plants don't mind rocks but when we investigated we found crushed rock compressed into a tight cap (between the two blue lines) over better soil below. 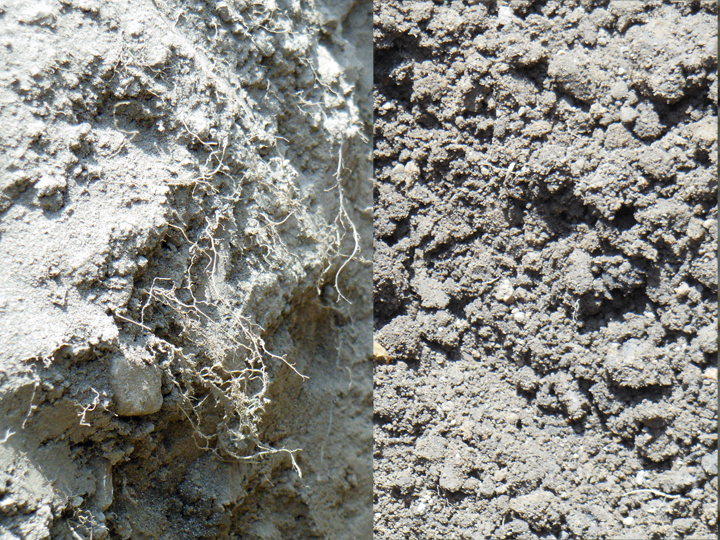 Compare the condition of the top soil (left side of the frame) and what's below the rock (right side). The topsoil is floury -- lacking pores to help it absorb water, drain, and allow air to reach roots. It's gray, meaning it has little organic matter in it to entice soil animals and microorganisms that might push its minerals into a better condition. The soil that's been beneath the rock (right side of the frame) is crumbly so it is be better aerated and drained. It's dark, an indication of organic matter content. It is the better stuff for an aspiring organic gardener to provide to the indigenous soil building organisms!

Perhaps rubble had been spread in this area during home construction to give vehicles better traction, and was packed and then buried during final grading. At any rate, it was now a root-stopping confiner of soil life.

Could we grow above the rock strata? (Yellow brown clod, below.) Sure. Would the plants do as well as if given a full 18-inch root run? No. Do we want this garden to have the benefit of that richer soil underneath the rock? Yes! (Below: The dark, organic rich, crumbly soil spread on the white square is the rock-capped subsoil.)

Could we compensate by raising the bed eight inches? Yes, although that would require at least three cubic yards of soil and some kind of structure to retain the sides, all budget-breakers for this new home owner.

Could we double dig the whole bed, moving that top ten inches aside and breaking up the deeper layer? Yes. However, our test dig indicated that process would take two people an entire day, and require a lot of joint-jarring effort to break the rubble layer. 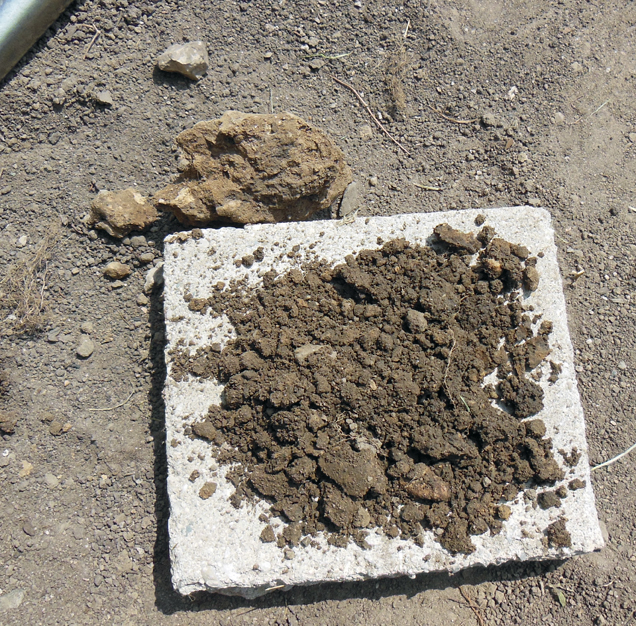 Our compromise, and the fun

We compromised, and treated the bed like a checkerboard of two-foot squares, punching through the rocky layer in every black square to make places where water and air could move freely between the layers.

Very soon, worms, microorganisms, insects and roots will move into the depths. They will also begin to erode the edges of the rubble layer. 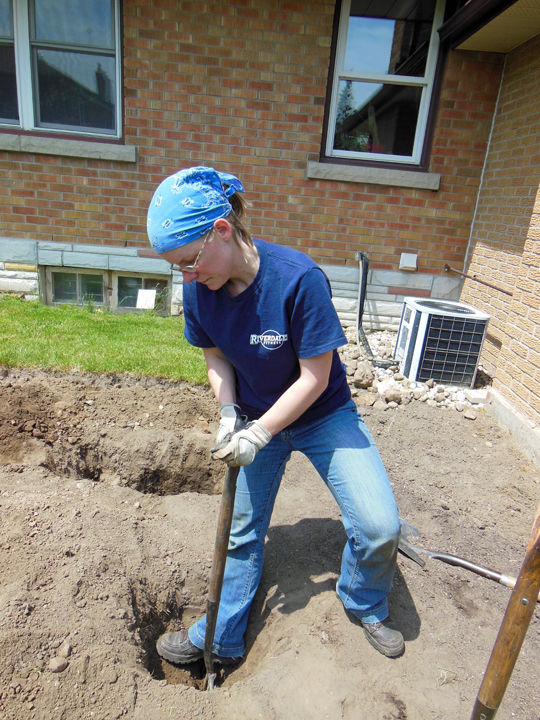 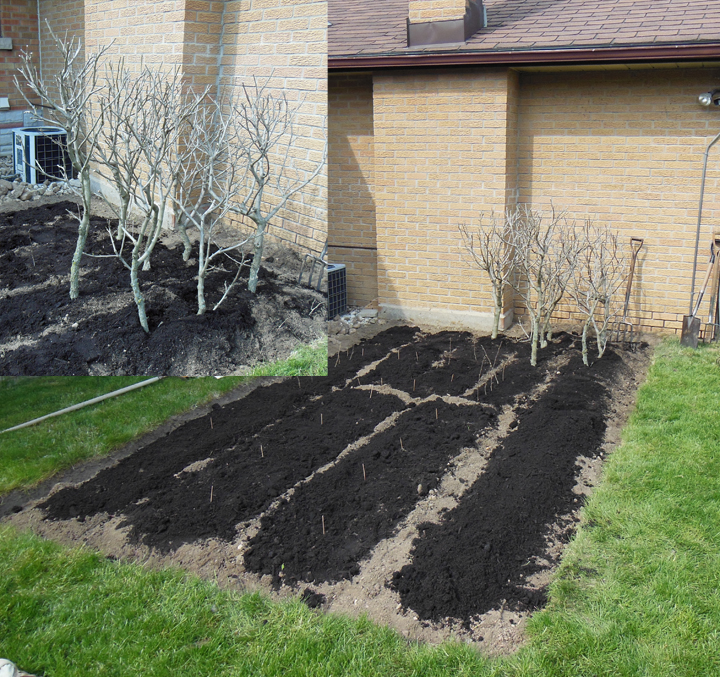 A rose of sharon shrub had been removed from elsewhere in the yard. (We love free stakes from sticks!) We set its trunks firmly in the ground to be pea stakes. 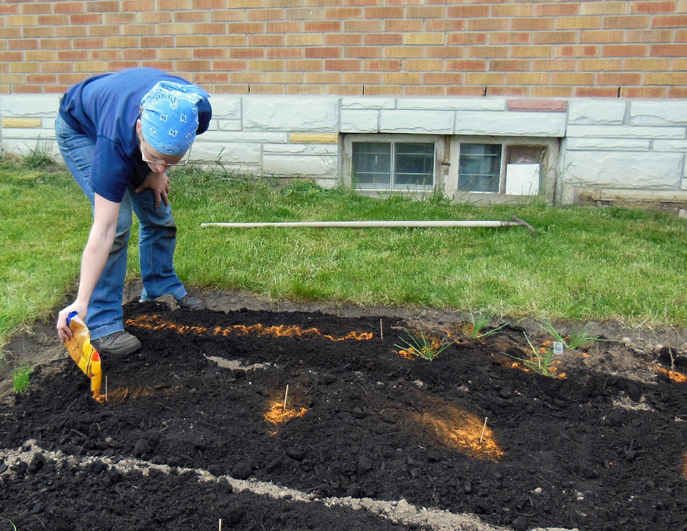 The gardener anticipates squirrely attention to her new planting, and makes use of hot chili powder.

It's always good to hear back about how our advice applied, helped... or didn't. Sometimes it's also good for a laugh.

What we heard was this: "I have a question for the Vegetable Emergency Room. Is it possible to bury the stem of a broken cucumber plant and get it to root? Ours was just, finally, going to deliver. We've had lots of salad greens and the tomatoes and broccoli are starting to come in, but we'd had nothing from the cuke until now. Then, suddenly, maybe because we were paying such attention to the cucumber,  the puppy suddenly took notice of it, grabbed it and broke it off. It all happened in just a split second."

The answer: You can try, but a full grown vine is not likely to survive without roots long enough to strike new roots. Even if some piece did survive and root it would almost certainly abort any cukes-in-process.

But hey, what's left of your garden looks great! Give yourself a hand for that, since you brought it off during one of the worst droughts on record.

By the way: What about the squirrels? Turns out the puppy was a big help, there! 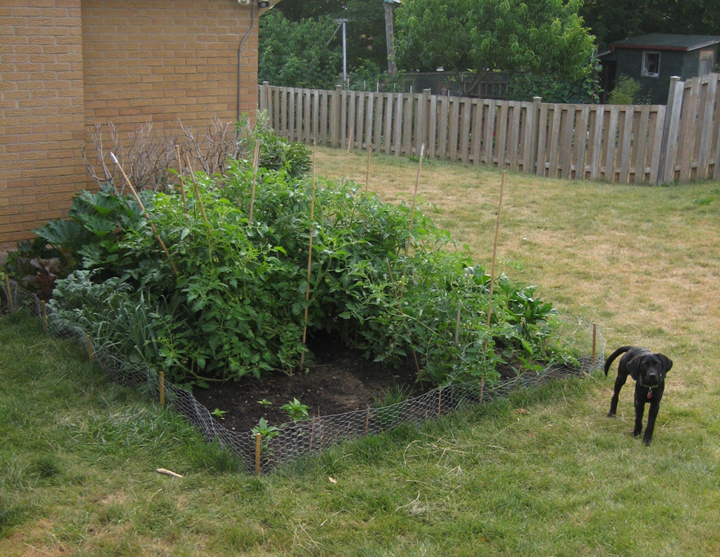 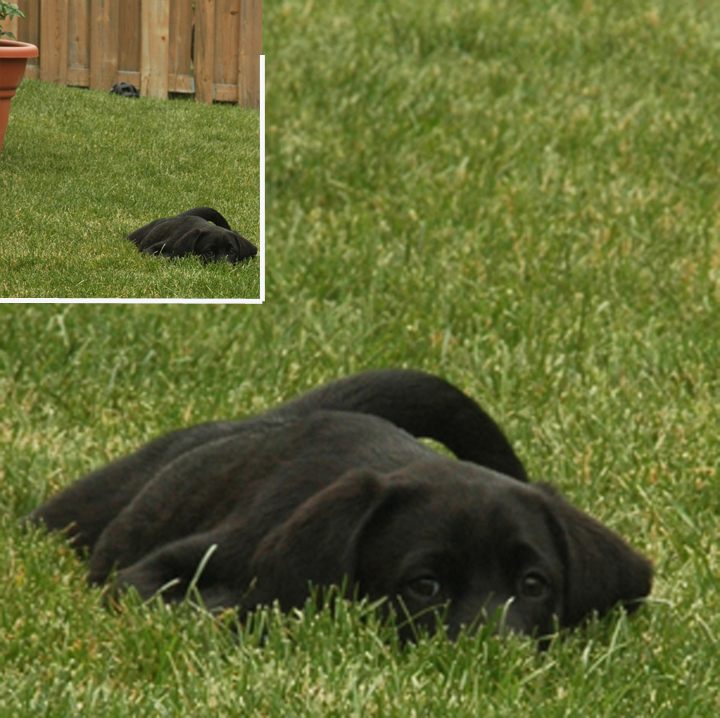 The puppy, it seems, goes into stealth mode to sneak up on garden-boound intruders such as squirrels.